The 48th annual Goldenstates delivered plenty of action-packed races on Saturday evening at the Perth Motorplex as the Summit Racing Equipment Sportsman Series competitors did all they could to take home the silver ANDRA Christmas Trees despite the challenges of cold conditions.

In Competition Bike, Decoglaze Glass Splashbacks Top Qualifier Ross Smith picked up another Goldenstates win for his trophy cabinet along with a new PB and a new record. Smith faced off against a red-lighting Daniel Natalotto in the final after defeating Michael Macri and Gordon Crawford in the three-round format (he had a bye in the first round) while Natalotto had earned his place in the final with wins against Paul De Klerk and David Waters before a bye in the third round. 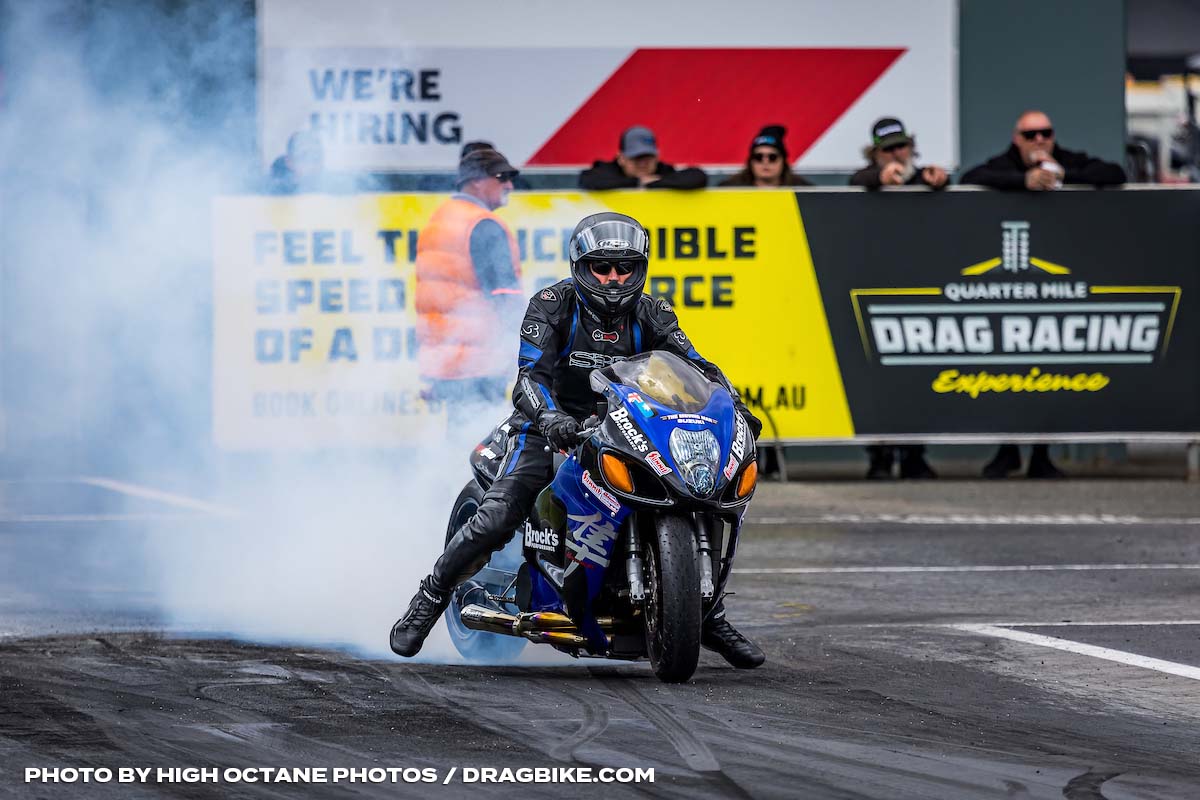 “I am super dooper happy with the weekend! We took the win and also top qualified which was something that we weren’t expecting. We had a few little dramas through the rounds but managed to ride around those, and then topped the weekend off with not only the win, but also our first seven second pass which we have been chasing for such a long time, and we also reset the record by doing that seven second pass!” Smith explains. “We now have three Goldenstates wins and five Westernationals wins on this bike!

“I want to say a huge thanks to ANDRA and a massive thanks to my crew chief Darrin McDonald and my long suffering also crew chief Hank Thompson – a huge thanks must go to the both of them and this win is for them. Thank you also to Summit Racing Equipment for sponsoring the Sportsman Series, and to Brock’s Performance, Wayne Patterson’s Bunbury Dyno and Ray Eason Motorcycle Engineering for all their support.” 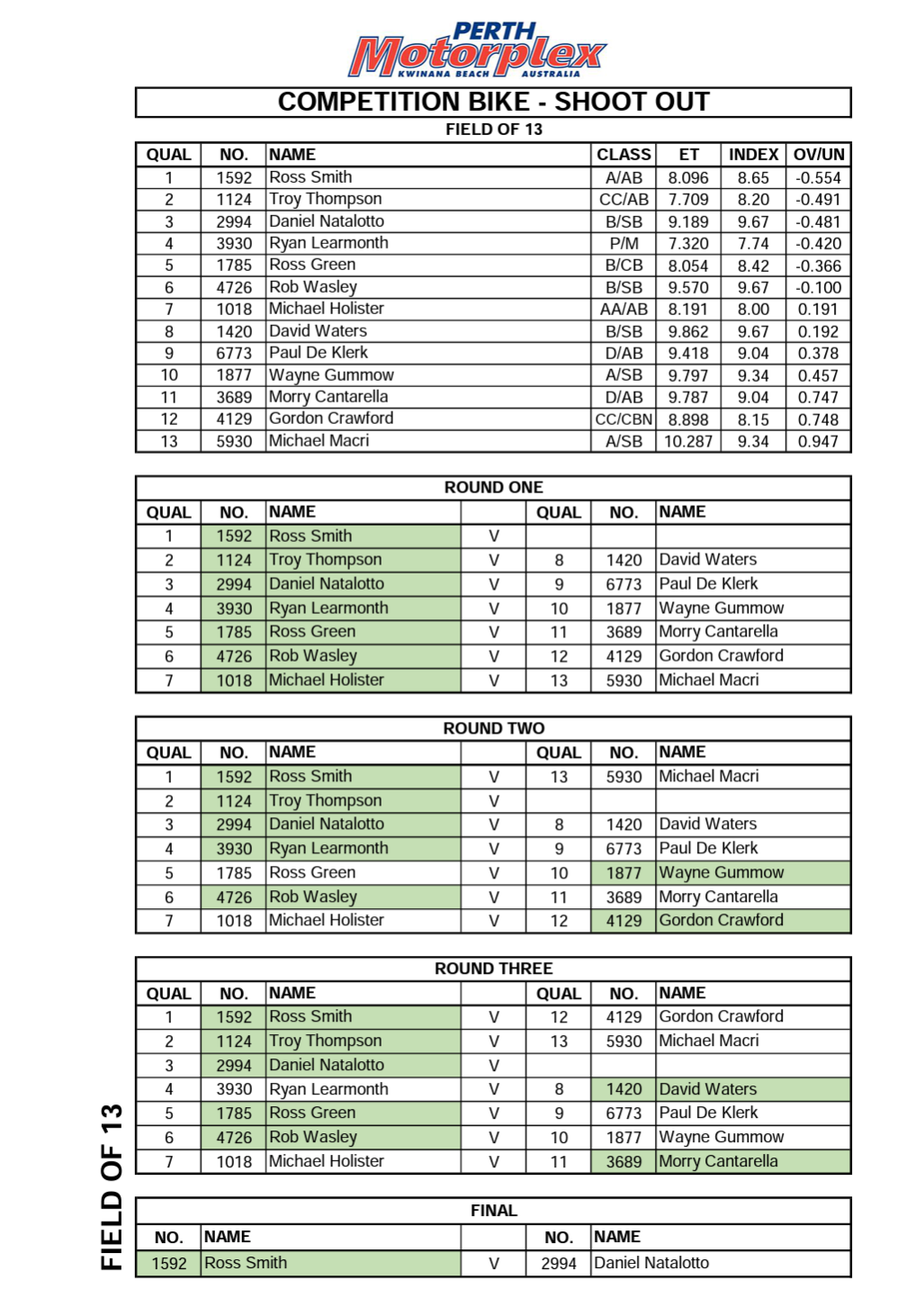 Hamish Cunningham took the win in Modified Bike over last year’s winner, Simon Garbutt who red lit in the final. Cunningham had booked his place in the final thanks to earlier wins from Paul De Klerk (round one), Shaun McGarry (round two) and Brian Hotker (round three) before a bye in the semis, while Garbutt had defeated Wayne Patterson (round one), Tony Ambrosini (round two), Decoglaze Glass Splashbacks Top Qualifier Paul Nieuwhof (round three) and Connor Wood (semi). 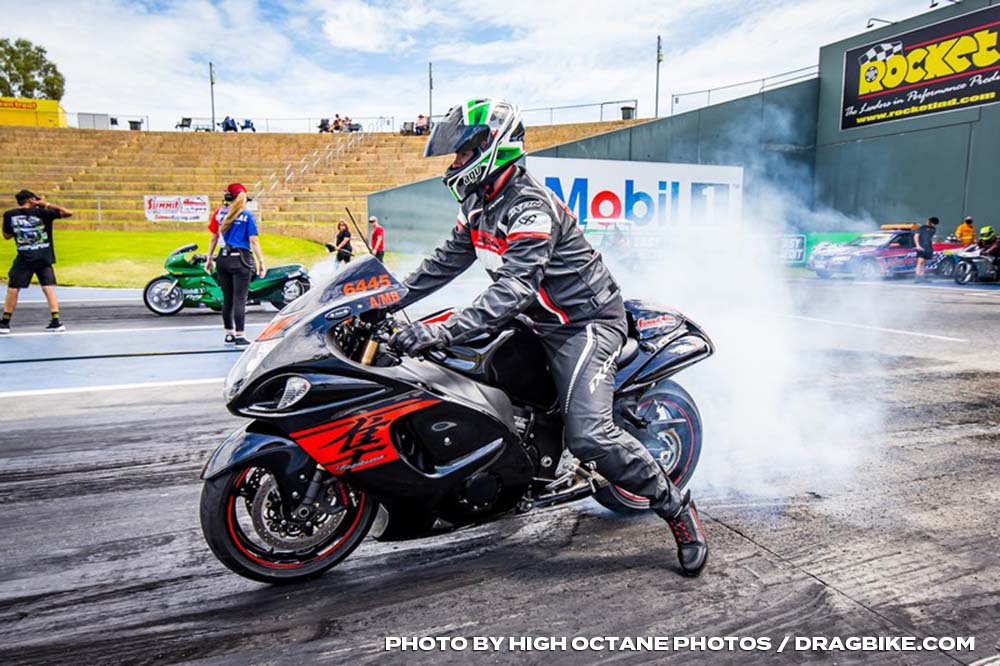 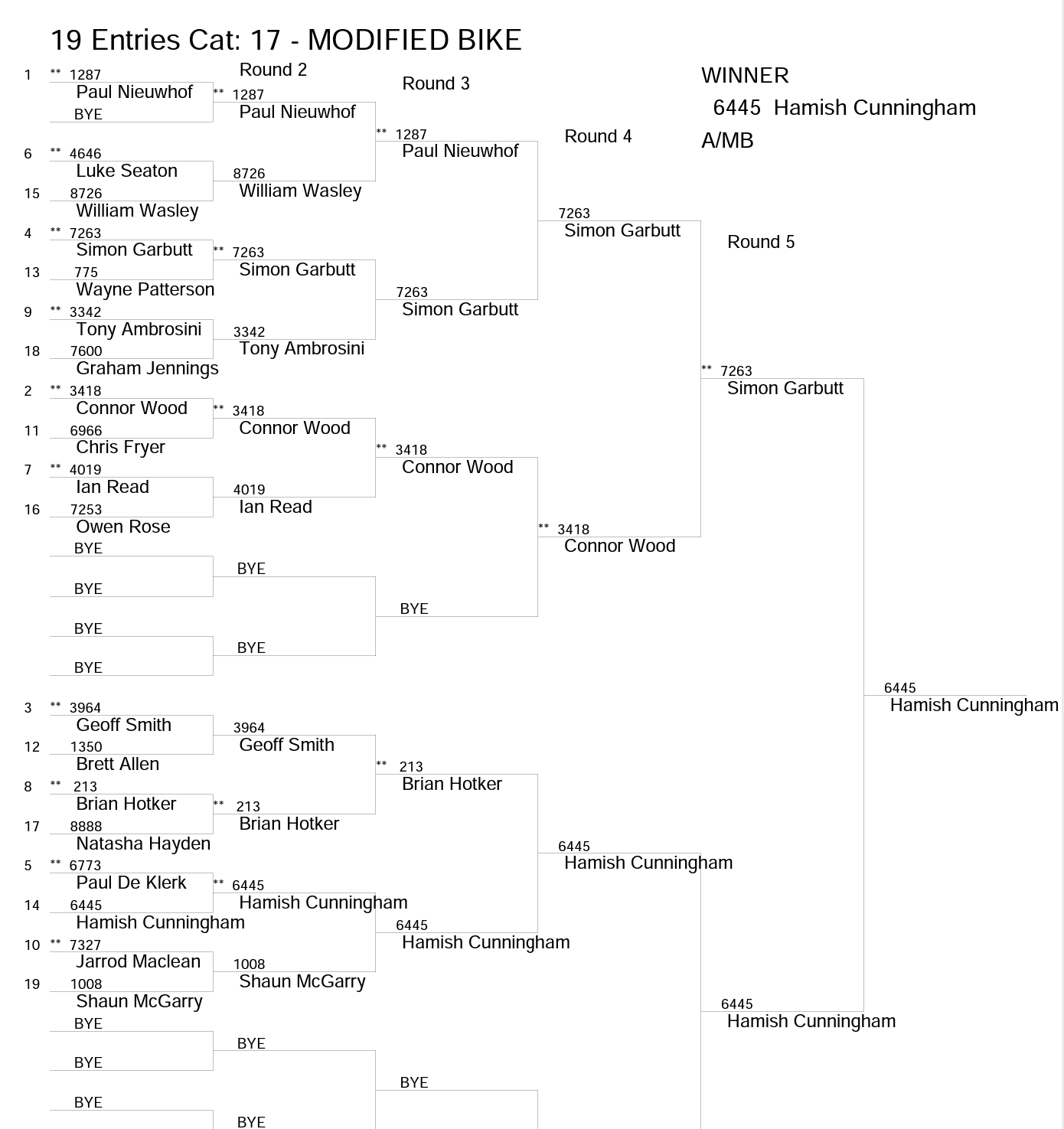 Kasey McClure followed up her 2021 Goldenstates win in the Modified bracket with victory in Supercharged Outlaws this year with a win over Jodie Mellitt. On her way to the final, McClure lined up against Steve Brown (round one) and Decoglaze Glass Splashbacks Top Qualifier, Alan Mahnkoph (round two), while Mellitt had dispatched reigning national champion Mark Hunt (round one) and Jessica Mullins (round two) on her way to the runner-up honours. 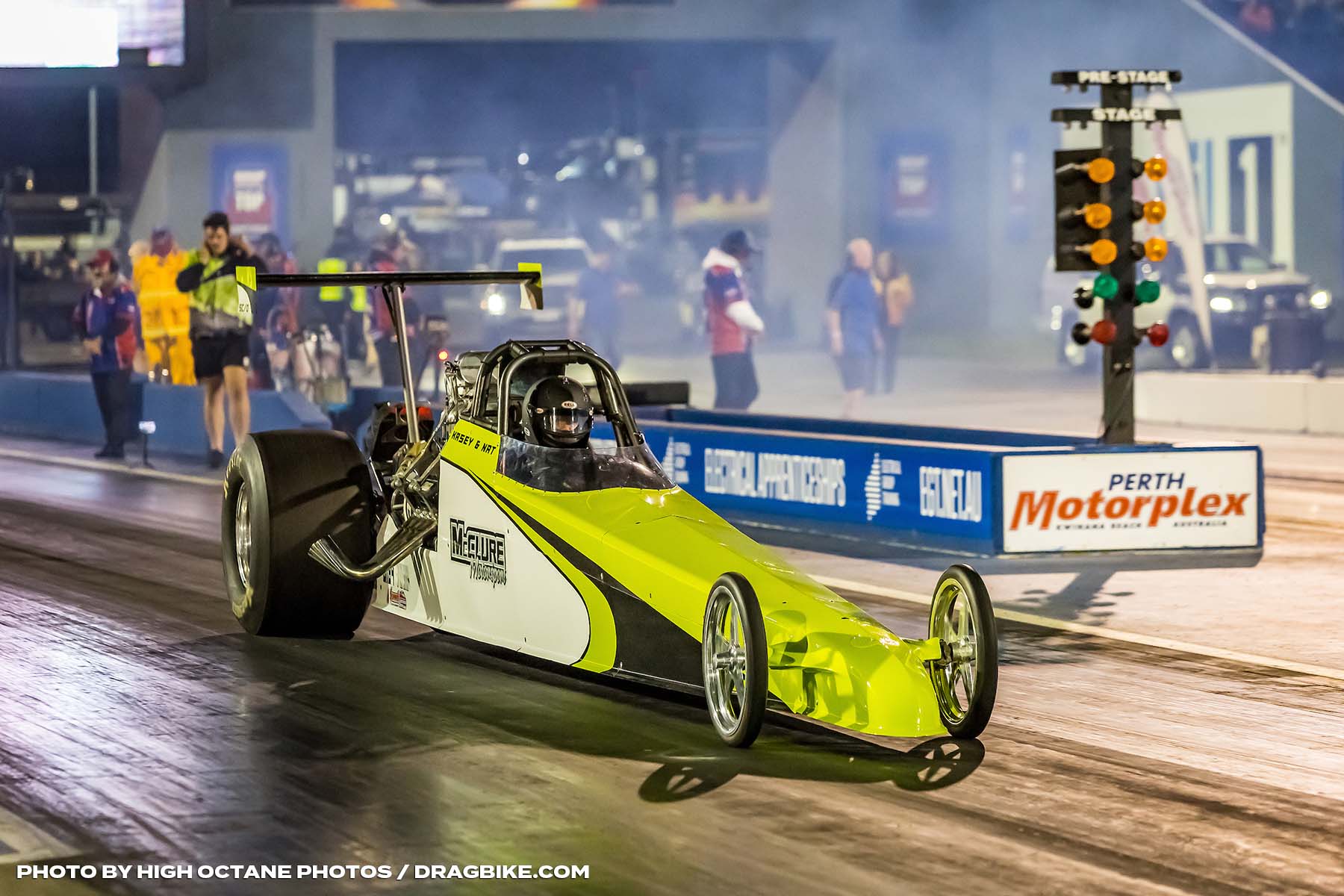 “Qualifying went well with the car running quite consistently and I was pretty consistent with the lights as well,” McClure said.

“In round two we had Alan Mahnkoph who was the top qualifier. It was another .020 light and a .47 on a .44 dial in, and Alan did well on that run as well, so it was a really nice and close race.

“In the final, it was really great to line up against Jodie and we had another pretty good race. We had another .029 light and while it got a little skatey in the middle of the track with the wind blowing around I stayed in it and ran a .50 on a .44 and took the win.

“It felt really good to take the win. I wasn’t really expecting it – we won the Goldenstates last year in Modified so I was happy enough to just get the car running well in this class as it wasn’t running very well, so we were happy with that for this meeting initially. So, to come away with the win is an extra bonus and a really great feeling.

“I want to say thank you to my family and crew for all of their support, my family are just the best mentors, and they help me so much.”

In Super Stock, Decoglaze Glass Splashbacks Top Qualifier Todd Stacy took an unconventional victory with a damaged engine over Jamie Chaisty following a bye in the first round and an unplanned solo in the second round when Kim Fardella came in underweight. 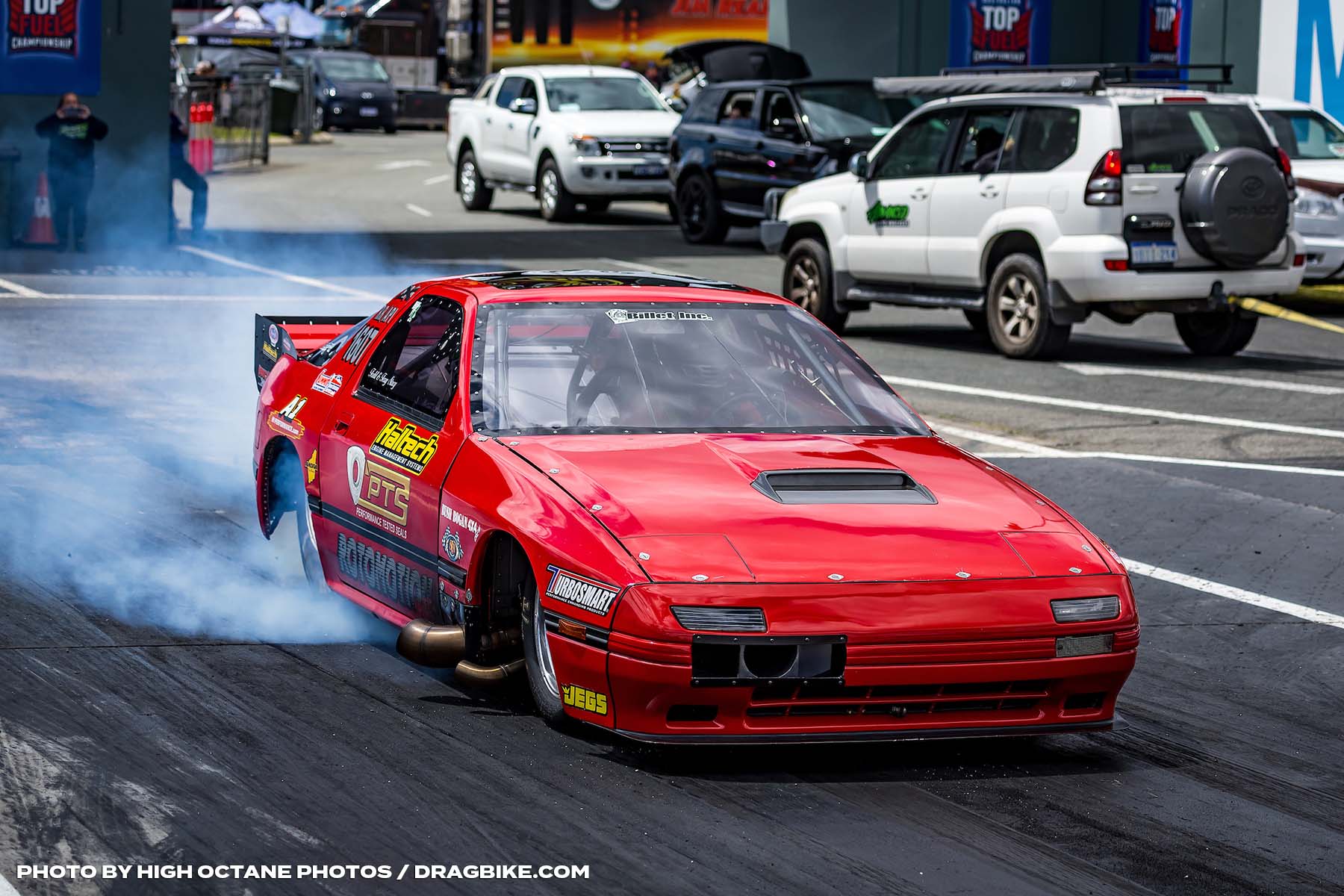 “The weekend started off not so great in qualifying on Friday night with a slippery track, we couldn’t even get it down the track and then we elected to sit out the last pass after Errol’s crash,” Stacy explained.

“Then on the first pass today, we went 7.53 at 180 miles per hour, which was a hundredth of a second under the handicap which is good considering this is a brand-new set-up.

“Unfortunately, after that we found some engine damage, so we basically had to bluff everyone to get through to the final – having a bye in the first round and a solo in the second definitely helped, and then Jamie red lit in the final, so we definitely had some luck on our side. I guess the lesson is that the day is not over, until it is over!

“So, what started out as a bad day, ended up really good! Thank you to dad, Woolie, Dean and also Rotomotion, Performance Test and Seals, Haltech, Billet Inc Rotary Engine Parts and A1 High Performance for their support.”

In the Competition ranks, Moreno Gullotto was ecstatic to take the win and earn his first ANDRA Christmas Tree after 27 years of trying. Gullotto faced off against Madison Brown in the final, following earlier victories over Paul Carey and Bailey McClure ahead of a bye run in the semi, while Brown had taken on Brett Glover (round one) and Decoglaze Glass Splashbacks Top Qualifier Michael Buckley (semi), with a bye in the second round. 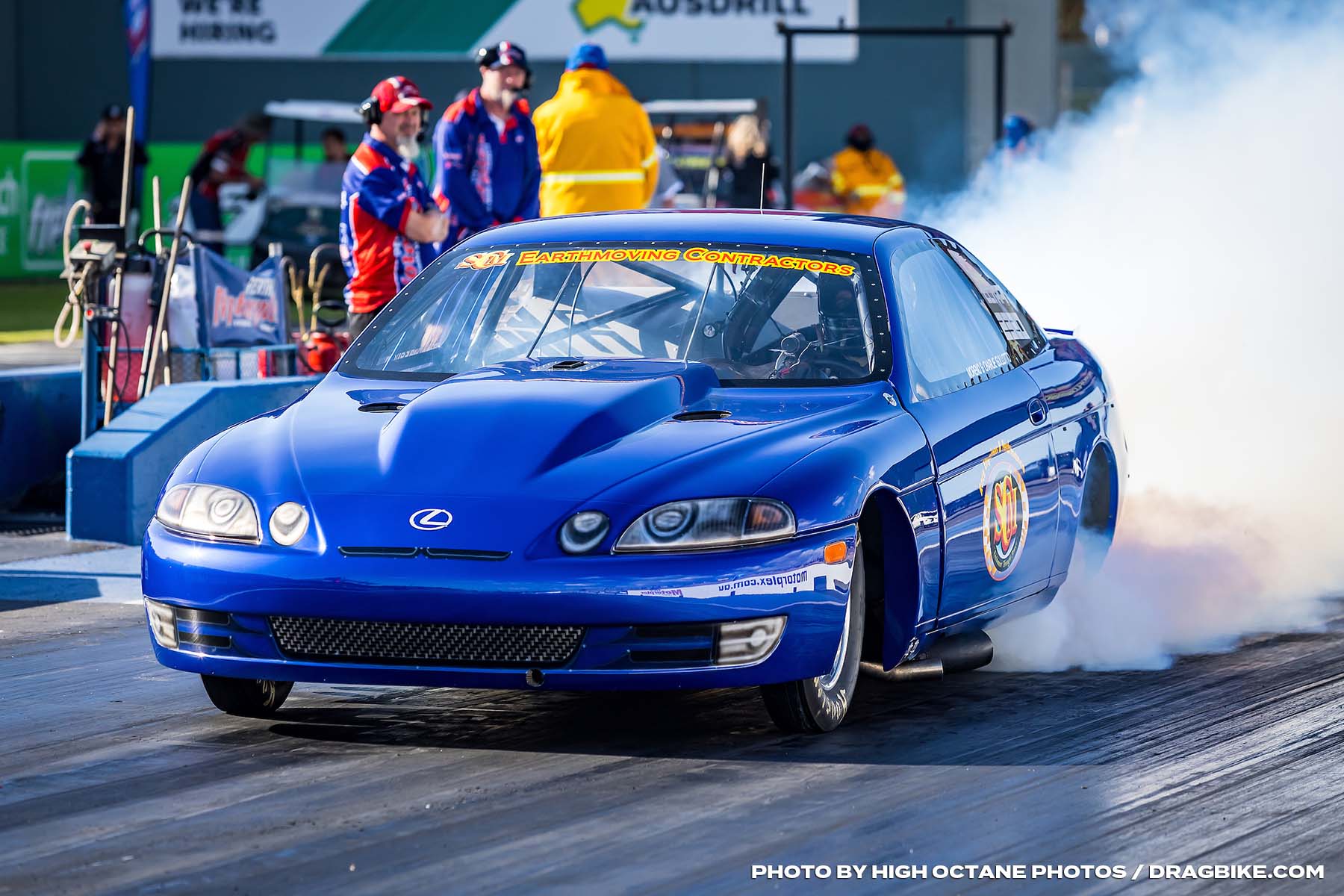 “Between the two days it was kind of disastrous for us really, we couldn’t get the car down the track at all, but in that last pass we managed to actually get it to go down – it wasn’t too straight, but we finally got a ANDRA Christmas Tree after 27 years,” Gullotto explains.

“It has been a long time coming for sure and it feels absolutely awesome – it is the best feeling ever to finally get one, especially after such a tough weekend. It always seems to go like that for us, it starts out disastrous and then comes good at the end,” he laughed.

“I want to thank my partner in the car which is my brother Charlie, and also all of my crew of which there is too many to list, and my sponsors SCM Race Engines and BP Racing Fuels for all of their support.”

The Summit Racing Equipment Junior Dragster final came down to a double break-out final, with Cooper Moresby awarded the win over Isaac Adamos. On his way to the final, Moresby had taken on and defeated Sarah Osborne (round one), Ross Lamattina (round two) and Brock Ferguson (round three) – who defeated Decoglaze Glass Splashbacks Top Qualifier Tahlia Martin in the second round – while Adamos had emerged victorious from battles against last year’s winner Jett Martin (round one), Beau Ferguson (round two) and Brock Moresby (semi).

In Super Street, Beau Higgins raced through for the victory over Robert Stone, following earlier wins over Tony Zaccaria (round one), Cameron Lockett (round two), Jacob Mills (round three) and Stephen Hotchkin (semi). Stone meanwhile had gone up against Andy Oorschot (round one), Peter Forward (round two), Michael North (round three) and Decoglaze Glass Splashbacks Top Qualifier, Steph Gullotto (semi).

In Super Sedan, another Higgins took out the winning honours, with Kyle Higgins this time taking out the win over Decoglaze Glass Splashbacks Top Qualifier, Jason Lippi. On his way to the final, Higgins had dispatched Jodie Thorstensen (round one), Martin Mirco (round two) and Brian Hicks (semi) while Lippi had successfully taken on Glenn Sterkenburg (round two) and Mark Busscher (round three) after a bye run in the opening round.

Darryl Treasure was another very happy camper at the Goldenstates, taking out the win with victory over Jeff Acton in the final of the Modified bracket. Treasure had ensured his place in the final with earlier triumphs over Brenton Back (round one) and Rachel Gannaway (round two) ahead of a bye in the semis, while Acton had taken wins from Andrew Frost (round one) and Decoglaze Glass Splashbacks Top Qualifier Paul Ryan (semi) with a bye in round two.

In Top Sportsman, the win went to Ashley Smith, with Smith taking a win over Kevin McIvor in the final after earlier defeating Alby Bakranich (round one) and Cory Read (round two) – who defeated Decoglaze Glass Splashbacks Top Qualifier Chris Roe in round one – ahead of a bye in the semis. McIvor meanwhile had gone toe to toe with Kevin Boulton (round one) and reigning champion Vlado Turic (round two) before facing Leon Davies in the semi.

For results from the Goldenstates at the Perth Motorplex, please click here.

ANDRA thanks the Perth Motorplex management and all of its volunteers and sponsors for an outstanding racetrack and a well-run event.

The next round of the Summit Racing Equipment Sportsman Series will be held at Portland’s South Coast Raceway across December 10 and 11. For event info, go to www.southcoastraceway.com.au