The first season of the new Australian Drag Racing Championship has come to a crowd-pleasing conclusion at the Perth Motorplex.

At the weekend’s EGT ANDRA Grand Finals, there was no shortage of ANDRA Christmas Tree trophies hoisted by grinning recipients following the conclusion of the 2021/2022 Australian Drag Racing Championship and Summit Racing Equipment Sportsman Series.

While the title winners have understandably been the subject of much of the rhetoric around the event, they weren’t the only ones impressing at the Perth Motorplex on April 9 however, with event wins just as hotly contested as the championship battles.

“It was a bit dodgy in the beginning, as we only ran some low sevens while trying to find our feet. Once we got in the groove with it, we were pretty right. It was a matter of working with the conditions, and the track was very good.” Matheson said. 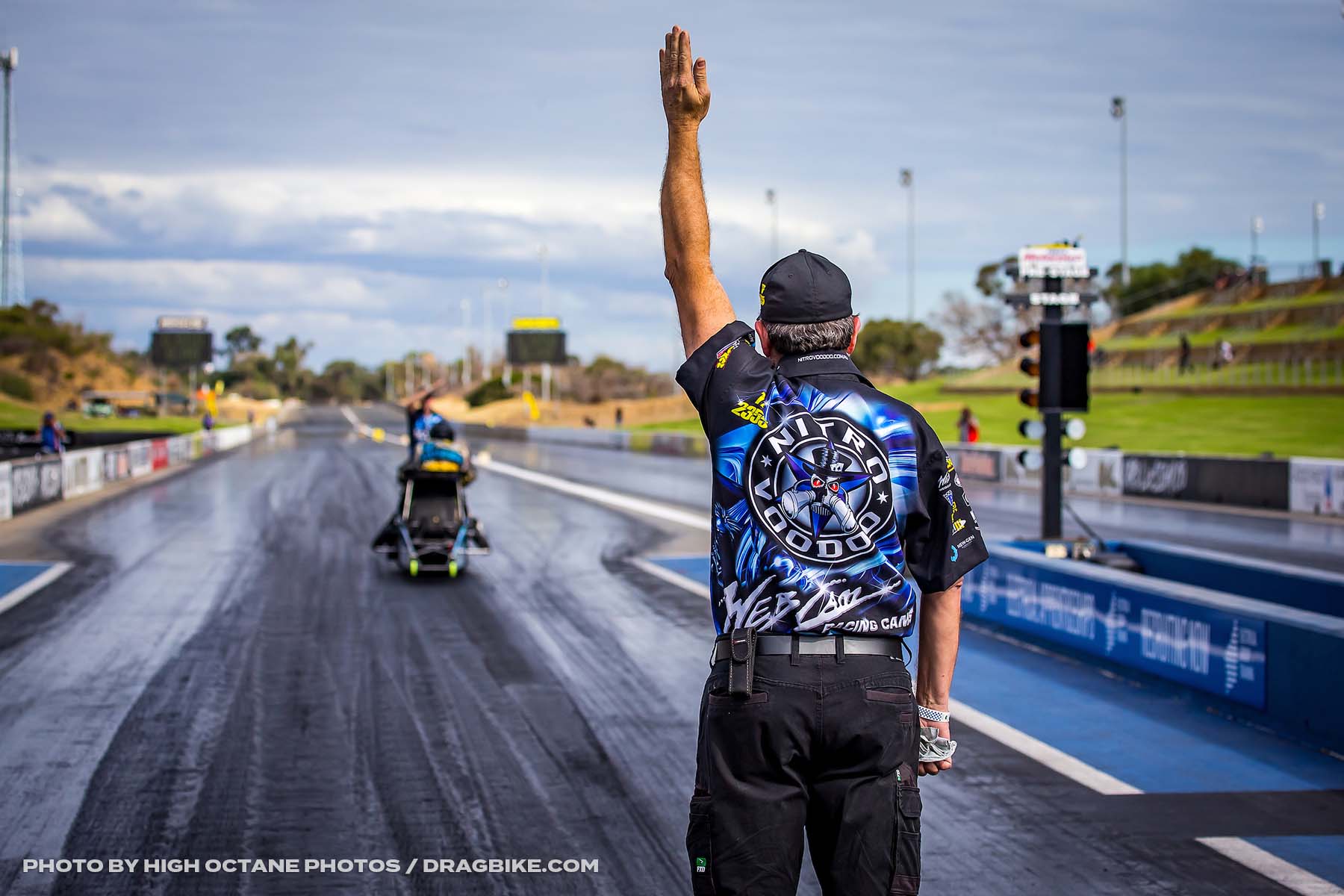 “On all three runs in eliminations we had to keep it soft in the middle because we were on the limits of the back tyre. It was marching along especially as we brought in more power in the back half. We had another go at running a record time in the final, but we couldn’t take too much risk. It got a little out of shape down the other end and I got a bit close to the wall, but the bike pulled up fine and we are looking forward to our next race meet in Sydney.

“The new engine program has really paid dividends, and we are now in the process of trying to get to eight championships. We build the motor ourselves and the reliability has made a big difference. We ran three 6.0s with the same motor and no engine damage. We were able to fuel it up, run our checks and away we’d go again. It underlines the reliability of what we are using.” 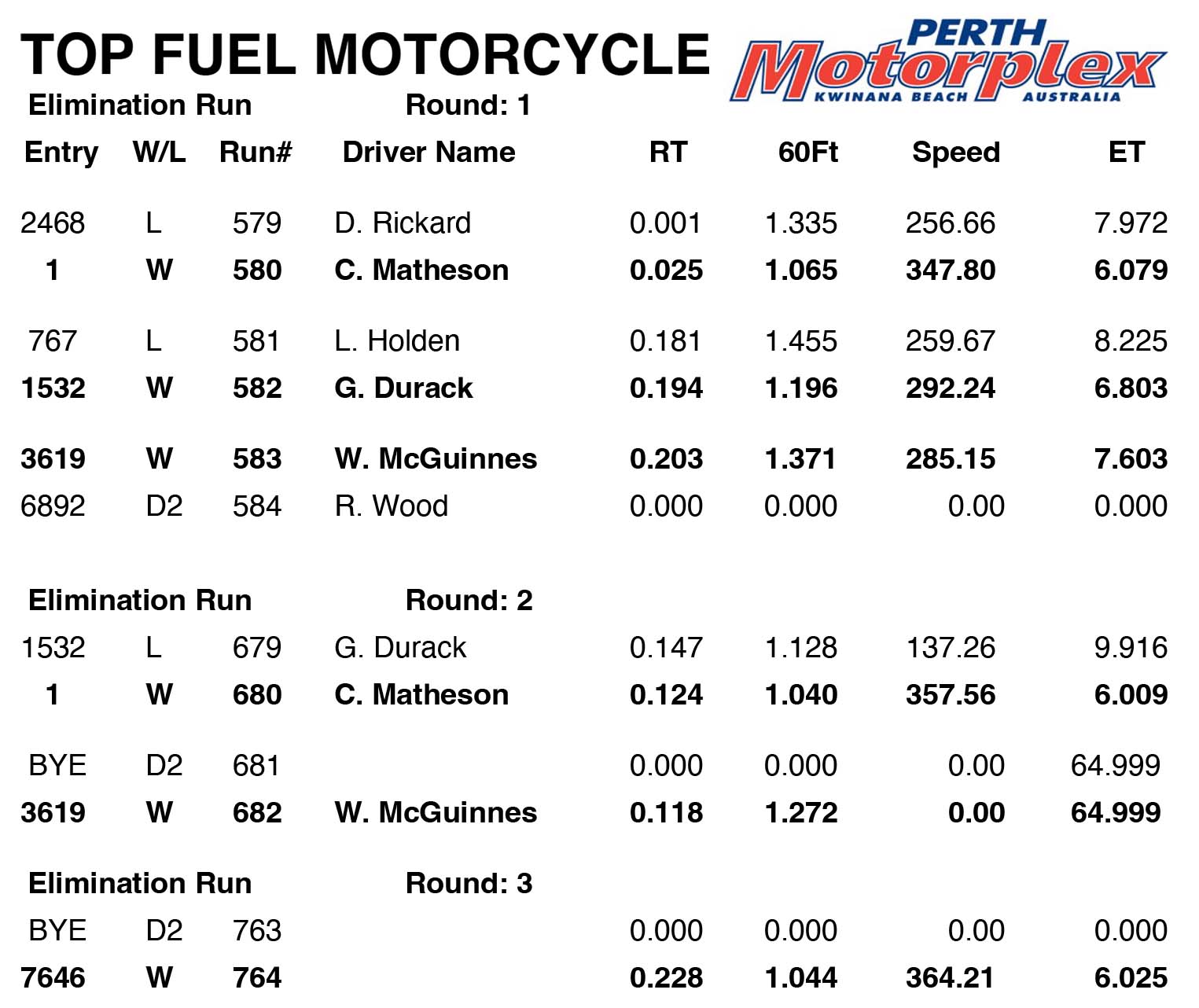 Greg Durack was confirmed as the title winner when runner-up Ricky Wood was unfortunately unable to contest the first round with issues with his bike seeing it pushed away from the startline, leaving Wayne McGuinness – the winner of the Crow Cams Australia Top Qualifier Award presented by Decoglaze Glass Splashbacks – on a solo pass.

While taking out the title, Durack would miss out on the event win, being dispatched in the semi by a hard-charging Chris Matheson who came agonisingly close to the first five second pass at 6.009 seconds and went on to take the event victory with a solo pass when Wayne McGuiness – who had earlier secured the Crow Cams Top Qualifier Award presented by Decoglaze Glass Splashbacks – was unable to front for the final.

“We are really happy with that – we have wrapped up the ADRC and also the WA State Championship tonight, so two out of three ain’t bad!” declared Durack.

“It most definitely is very special; winning championships are always special and they aren’t easy to get of course, they take a lot of hard work and so we are very pleased and very happy to secure another achievement in my journey of drag racing!

“Overall though, this is very pleasing. It is my first Australian Championship in more than 40 years of drag racing motorcycles, so it is very welcome.

“The season has had its ups and downs and I probably didn’t quite get to where I wanted to with a couple of meetings having things not working quite right, but we are over those issues now and the bike is back to where it should be – so now we just have to wait for the next season!

“We are planning on being in Darwin to race, so we are looking forward to that. And from there, whatever will be, will be. I would like to do a lot more travelling; this journey of motorcycle drag racing is not over yet!

It most def is pretty special, winning championships are always and they aren’t easy to get, of course they take a lot of hard work, very pleased and very happy with it. Another achievement in my journey of drag racing!

“Thank you to my brother Jeremey, my sons Cameron and Scott, my wife Kimberly and our sponsors and supporters Clyde Carstairs from Bravo Resources and Dragon Bikes; Gavin Forbes from FME; Grant Bojanjac from Per4manz Turbochargers; and also, Lou Cotter.

“Thanks also to the Perth Motorplex team who have always been great supporters of Top Fuel Motorcycle, to Ray Treasure and his team, and to all of my fellow competitors – I hope to see you in the lanes in the near future!”

“We were very nervous initially about having a brand-new tyre on there, as they take three laps to get any grip. On the first lap it surprised us as it spun first but then caught and drove and it got us an 8.0 run to top qualify. On Saturday we used the same setup and the tyre gripped, so we knew the tyre was working and we could zero in during eliminations,” Smith said.

“On the first elimination round the track bit us. We had it fairly soft, but the track had a lot of grip and so the bike wheelstood, which it hasn’t done for quite a few years. My autopilot kicked in to save the lap, because with the shootout format of Competition Bike you need to win every round.

“In the third round against Paul DeKlerk we got more aggressive with the clutch and expected an 8.1 lap, and it went 8.01! That put us into the final against Phill Paton, who had earlier wrapped up the ANDRA championship. We knew on paper we were further under the index than Phill, so it was a matter of putting a clean lap together. We went 8.02 and with that we had the national ET record and one of our best speeds ever at 164mph, just shy of the national speed record.

“We’ve had a perfect season in WA; we haven’t lost a race. We’re very happy with this weekend and the outcome. Next season we will try to get some weight out of the bike, and we’ll try again.” 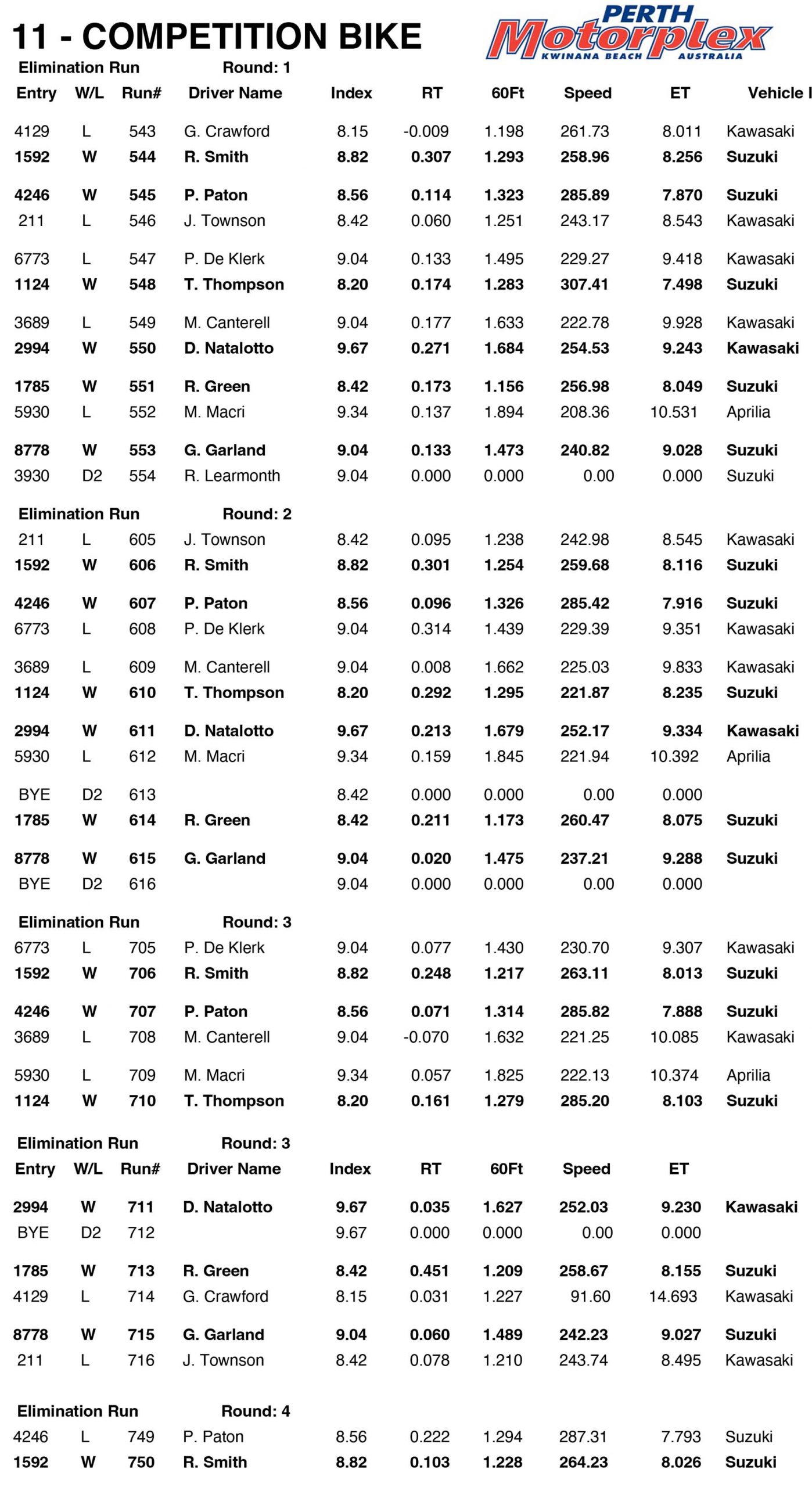 “Our weekend was a bit rushed, having to finish at work and then make it down to the track in time for Friday night qualifying. Our first pass was a non-event due to a timing system malfunction, so we had to re-run the bike straight away for a 9.60. We had good consistency in qualifying as our other runs were also 9.6s,” Garbutt said.

“The bike was getting up on the back wheel, so I was having to play with the throttle and body movement to settle it down. It made it hard to pick a dial-in with what the bike was doing. In the final against David, I carried the front wheel pretty far in the air, which meant I had no wiggle room to get off the throttle. I had to keep it pinned all the way through the finish line and we dropped to a 9.65, but David broke out and we got the win.

“It’s our second big win this season, we also took out the Goldenstates in November. We almost looked at taking a trip over east to chase the national championship, but COVID made that too challenging. We will do it eventually when all the ducks line up.” 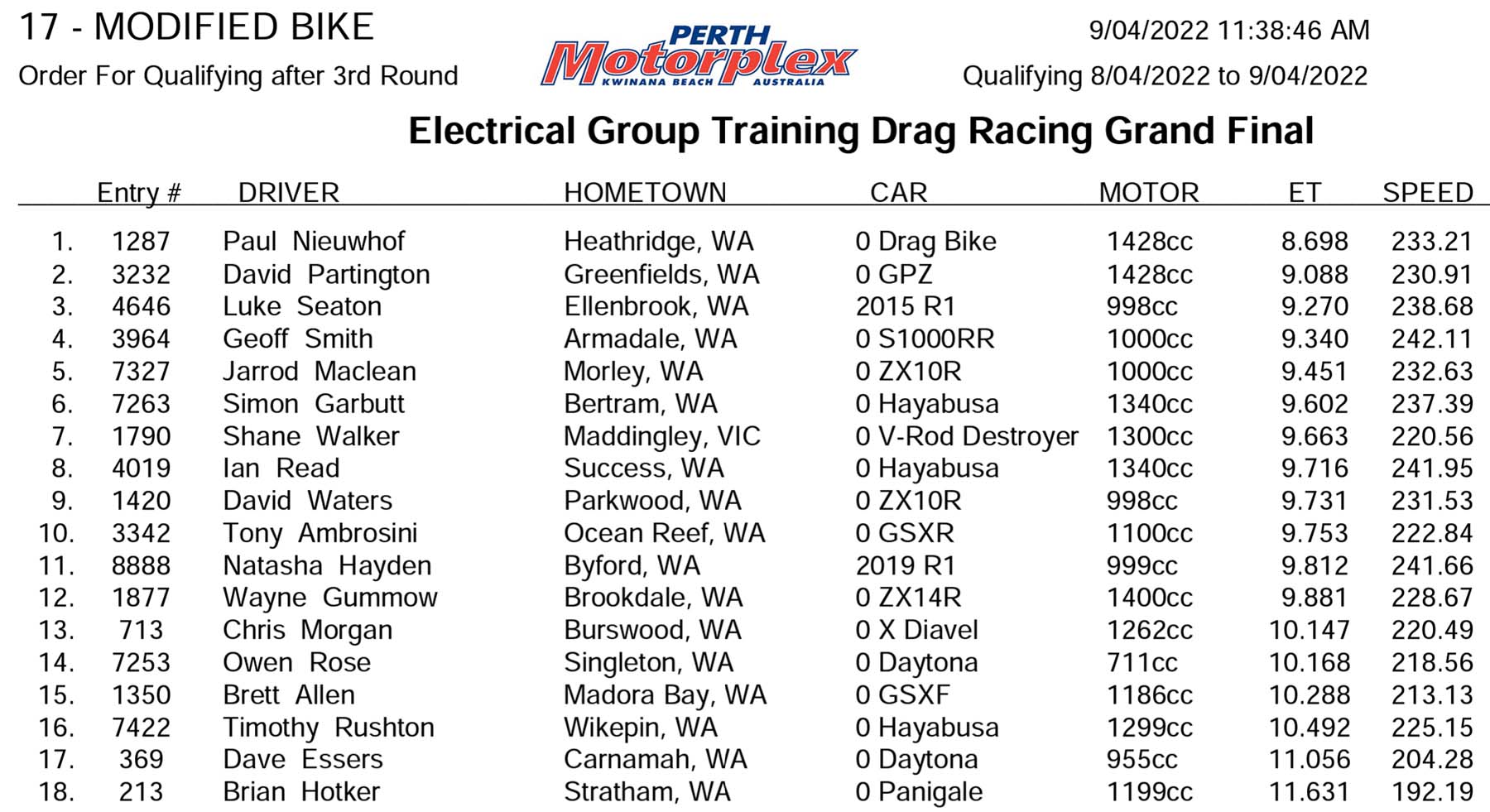 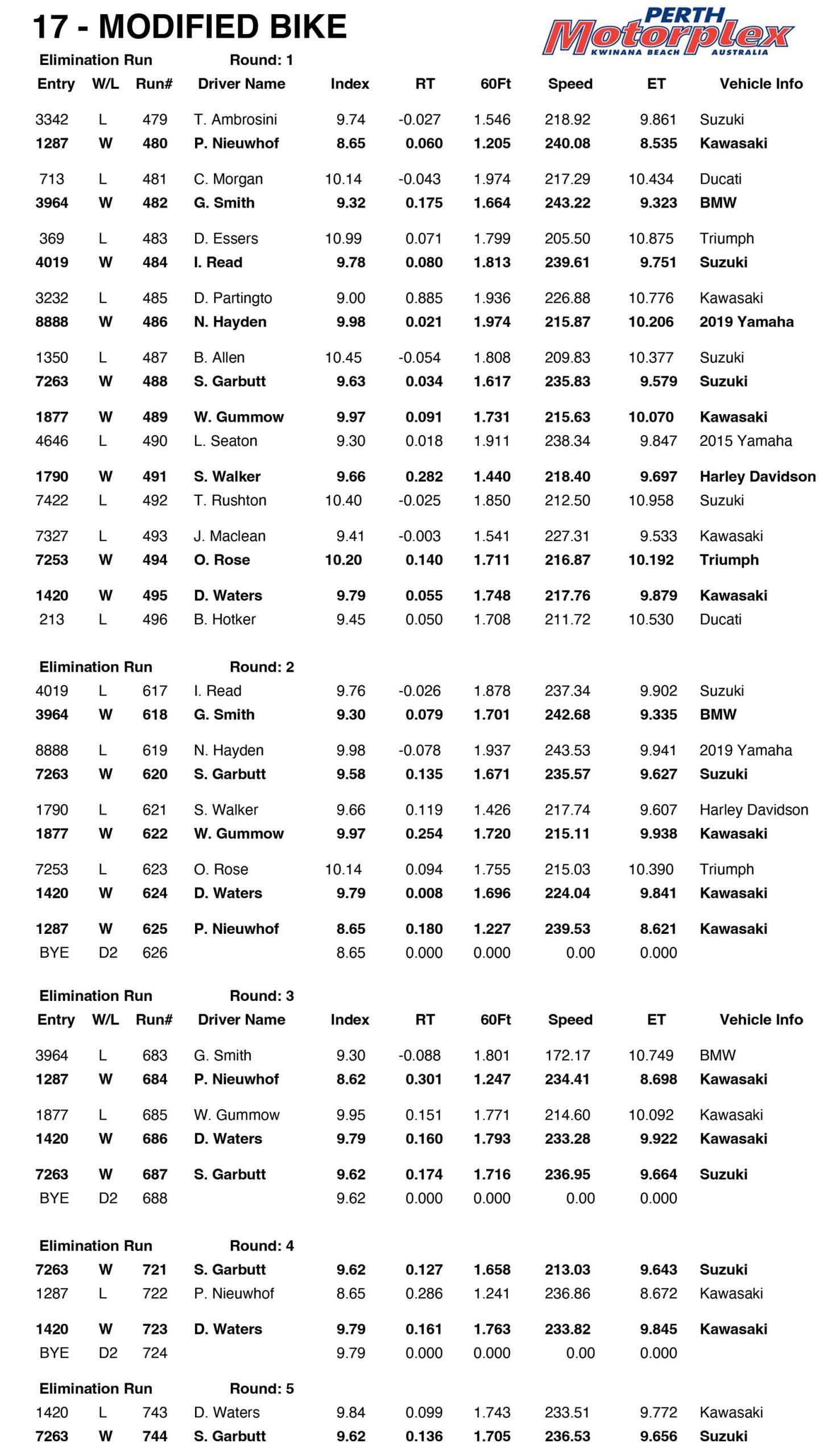 Shane Walker is your 2021/2022 Summit Racing Equipment Sportsman Series Australian Champion in Modified Bike! This is the second consecutive national title in the bracket for Walker.