The professional ANDRA category of Top Bike will be renamed Top Fuel Motorcycle for the 2014 season in a rebranding move for some of the most powerful motorcycles on the planet.

With nitro-methane burning, supercharged, turbocharged and nitrous-assisted machines all featuring in Top Fuel Motorcycle, several competitors submitted proposals to alter the name and to build upon the brand of their nitro burning cousins in Top Fuel dragsters.

The rebrand also brings the class into line with Pro Stock Motorcycle in terms of nomenclature for two wheeled racers. 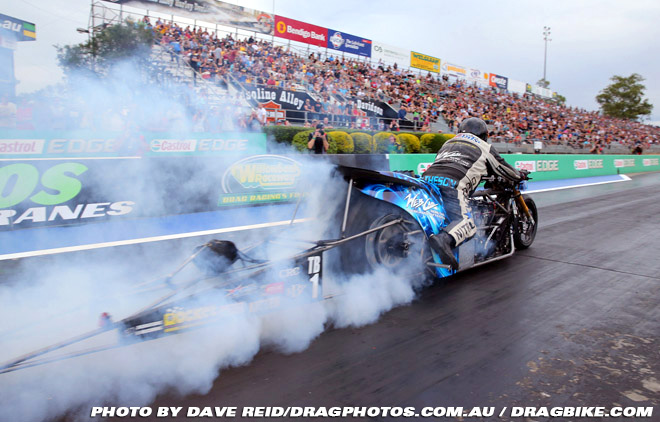 ANDRA competition manager Brett Stevens said while the change would have no effects on the rule set of the class other than in name, he hoped it would better reflect the effort many Top Fuel Motorcycle competitors put into their teams and the bravery it takes to ride one down the drag strip.

“To lie over a nitro-fed motor and accelerate to 350kmh in just six seconds takes a courage not held by many so we hope the name Top Fuel Motorcycle shows that,” he said.

“Competitors asked for this name change so when the last rule changes process went around we were happy to oblige.

“Top Fuel Motorcycle continues to be one of the wildest categories in the ANDRA Drag Racing Series and with some big names rumoured to be coming back this season we can’t wait to see what they bring in 2014.”

The first round of Top Fuel Motorcycle takes place at Perth Motorplex on January 10-11 alongside the mighty Top Fuel dragsters.