The event was also the biggest for the Perth Motorplex in recent history with total attendance figures of 12,293 over the two-days (7,225 on Saturday and 5,068 on Sunday); and even those who were not in attendance were supporting the Westernationals, with the Sunday evening live stream recording 129,000 views with a reach of 400,000.

Setting the new records on-track were the following competitors, who were part of a 200+ field of racers who had traveled from all over the country to take part in the event which included round eight of the 2019/2020 Summit Racing Equipment Sportsman Series as well as Top Fuel, Top Doorslammer, Top Fuel Motorcycle, Pro Stock Motorcycle and Top Alcohol action:

Wayne Patterson’s new ET record was not his only success for the weekend, with the local racer also taking out the Gold ANDRA Christmas Tree for the Competition Bike bracket.

“We have been coming down in our ET for a fair time now and I would have liked to set the record – it can hurt your index but at the end of the day, I like to go fast!” Patterson said.

“With the Chicago Shootout race format, if each of us win three races it comes down to who was lowest under their index as to who goes to the final, so you have to go down that path and it makes us go quick. 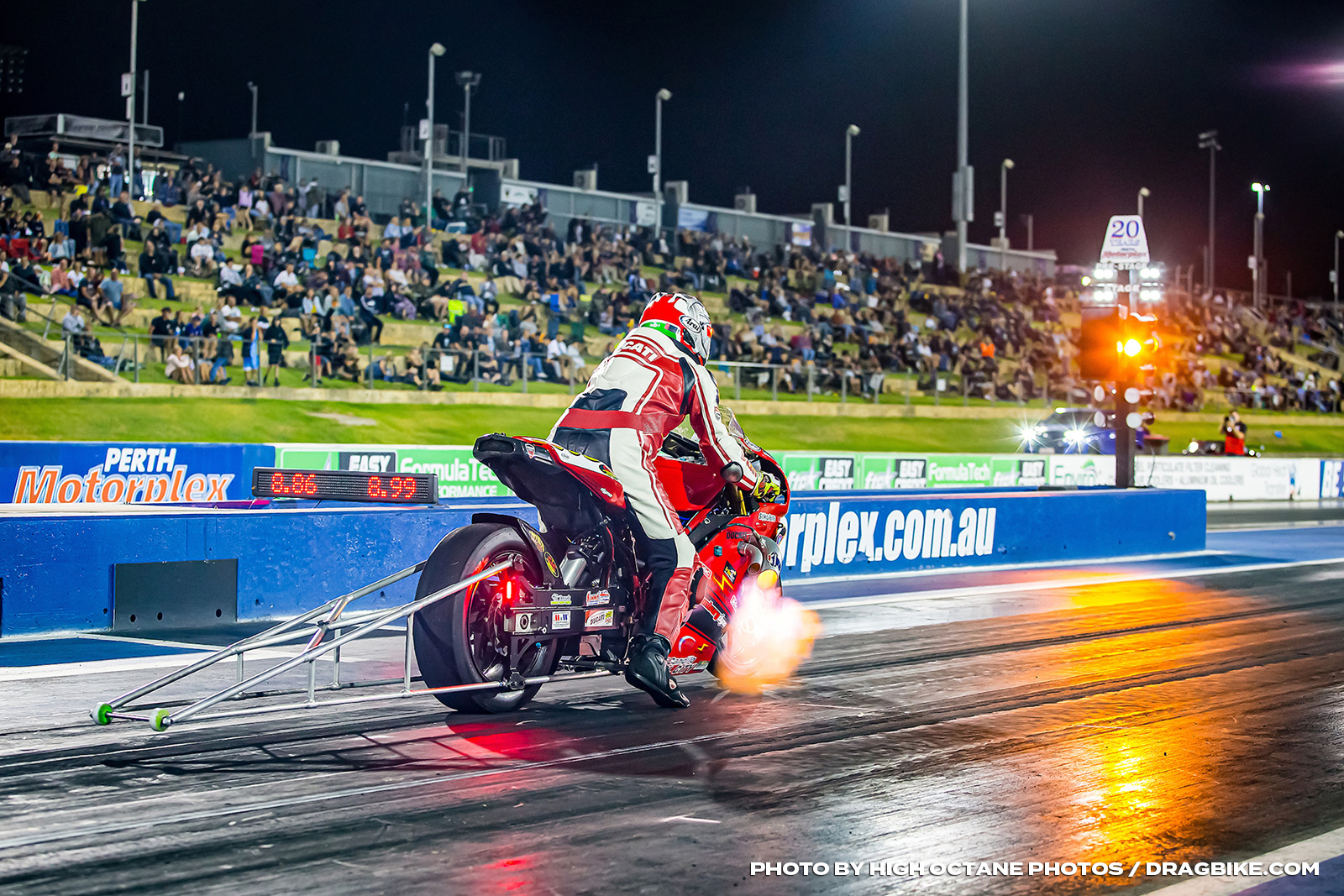 “I collect clown masks and I said that if I won the event I would wear it back, so I put it on at the end of the track and wore it back along in front of the crowd and into scrutineering and it got quite a response!” he laughed.

“Overall the weekend went smoothly, we had only one little hiccup where the bike didn’t change into second so it virtually stopped and then took off again and we luckily still won, but aside from that the bike was just flying in every race.

“We tune it between each race with Glen Baker from Auto Sport Electronics downloading all the data from his place before sending back the new tuning map to put in for the next run. It is pretty unreal what you can do over the internet now!

“I would like to thank Ray Treasure and all of the track staff for getting the place up and running after the lightning strike, it would have been a massive effort. I also want to thank Glen Baker from Auto Sport Electronics, TRIBO DYN Performance Lubricants, CIC Ceramics Welshpool WA, Bunbury Dyno, Ducati Bunbury and my son Todd Patterson who built the bike and my grandson, Jedd Patterson, for helping me on the day, as well as Ebony and Chris for all their help during the event.”

ANDRA thanks the Perth Motorplex and all of its volunteers and sponsors for an outstanding race track and a well-run event. For full results from the Westernationals round, please click here. To see the new records data, please click here (1320ft records) and here (1000ft records).

The Westernationals marked round eight of the 2019/2020 Summit Racing Equipment Sportsman Series. Round nine of the Series, the Twilight Nationals, will be held at the Sunraysia Drag Racing Association’s Sunset Strip across March 13 and 14, 2020. For event information, please visit www.sunsetstrip.org.au or www.andra.com.au

The Twilight Nationals will be the Series’ penultimate round, ahead of the ANDRA Grand Final which will be hosted by Adelaide International Raceway across March 28 and 29.