Ross Smith hopes to make it three straight Comp Bike Westernationals titles in just under two weeks’ time but he’s knows it’s not going to be as easy as one, two, three.

When you have competitors like Greg Durack in the opposite lane you need to be at the top of your game and hope lady luck is on your side.

“I’ll certainly be trying to do three in a row,” said Smith. “It’s going to be pretty tough this year; Greg Durack will be well under his record again.” 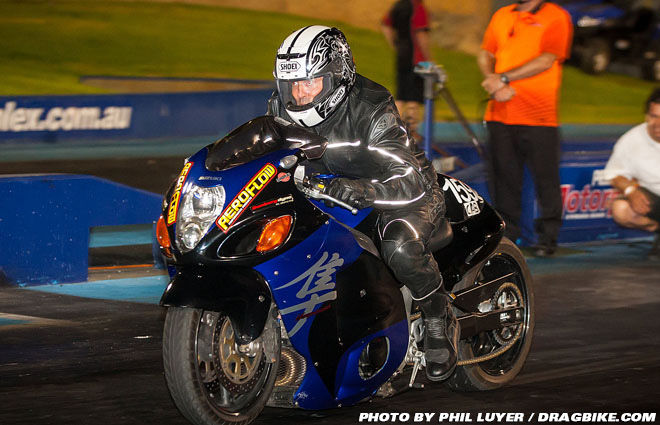 “It’s just one of those things. You’ve got to keep as sharp as you can and get a bit of luck on the way through.”

With those two Westernationals in the trophy cabinet and a 2nd and 3rd placing in the points chase the past two seasons of the Aeroflow Sportsman Drag Racing Championship, Smith has stepped up from A/SB to C/AB this season.

“It’s been a bit of a learning experience and development process so I’m hoping I’ve got enough to get through the rounds at the Westerns. I’ve got a few things I might change before but I’m a bit reluctant to do that. I’d rather go with something I know.”

That strategy has so far paid off as Smith powered his Hayabusa to a win in round two of the ASDRC at Perth Motorplex in January defeating Stan Lisle in the final with an 8.591 on the 8.74 from Lisle’s 10.543 on a 10.26.

His sights are now firmly set on an event the West Aussies feel very strongly about.

“It’s our biggest event for the season in WA. We don’t get that many guys coming from interstate in Comp Bike but it’s important to us and it’s always nice to maybe ping a few records here and there.”

The 43rd Westernationals will be held at Perth Motorplex from February 28 – March 2, 2014 and will act as round three of the 2014 Aeroflow Sportsman Drag Racing Championship.