After winning the NHRA Four-Wide Nationals in late March, reigning Pro Stock Motorcycle world champion Andrew Hines seemed to have picked right up where he left off a year ago.

His season, though, has seen a sudden change and not in the way Hines wanted. He is nowhere near panicking, but Hines is on the verge of making major changes to his Screamin’ Eagle Vance & Hines Harley-Davidson heading to this weekend’s Lucas Oil Route 66 NHRA Nationals presented by General Tire at Route 66 Raceway.

“I’m confident with what we’ve done but I can’t say what’s going to happen until we get to the track,” Hines said. “But it’s definitely outside the box.” 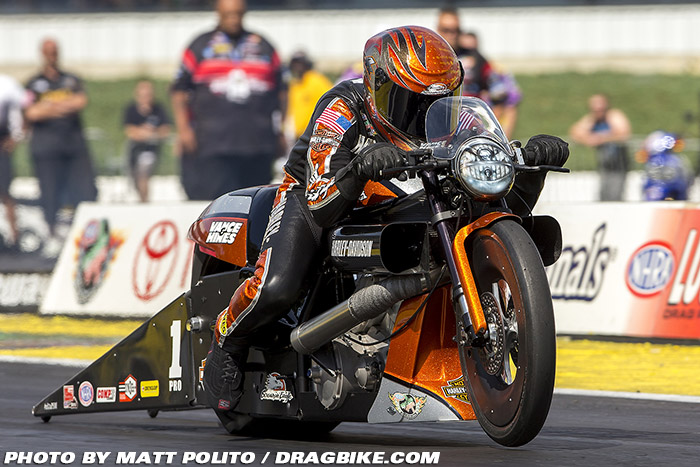 Racing on the second weekend of a back-to-back stretch, Hines won’t have a chance to test the changes until he arrives at Route 66 Raceway. But heading into the sixth of 16 races in the 2015 NHRA Mello Yello Drag Racing Series Pro Stock Motorcycle season, Hines felt the changes were necessary.

In the past three events, Hines has a first-round loss and a second-round defeat last weekend in Norwalk, dropping him to third in points. It’s hardly gloom and doom for the four-time world champion but it’s alarming enough that Hines doesn’t want it to become a habit heading into a key point of the season. 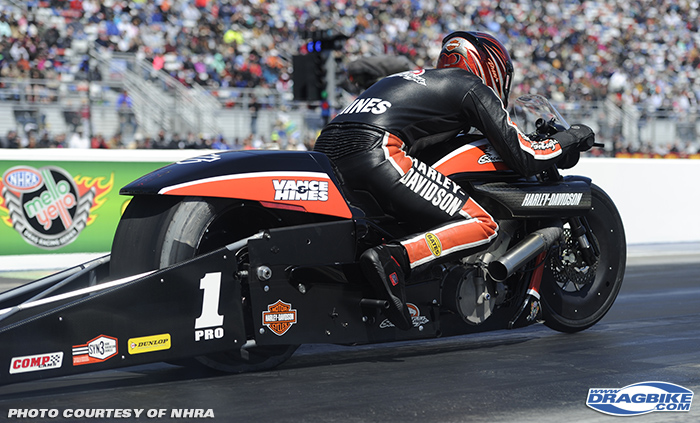 “This season has definitely been subpar,” Hines said. “We got the Four-Wide win and got that win early and that had everyone pumped up. But we’ve been struggling since then. I wish I could put my finger on it but it’s been tough. We’re trying all kinds of different stuff but haven’t been able to solve it yet.

“Hopefully once we get it figured out we’ll be able to turn some heads. We’ve done some good stuff at the shop and I feel more comfortable going to Chicago this week. We’ve made some drastic changes on the dyno.”

But with the season becoming far busier, a chance to fully test the changes won’t come until after Chicago, meaning the first qualifying session at Route 66 Raceway will also serve as the first test session.

That will make qualifying extremely important for Hines this weekend, especially going against a talented field led by points leader and teammate Eddie Krawiec. Hector Arana Jr. won a season ago in Chicago and remains in the top five, while Karen Stoffer jumped all the way to second by winning in Norwalk, her second victory of 2015. 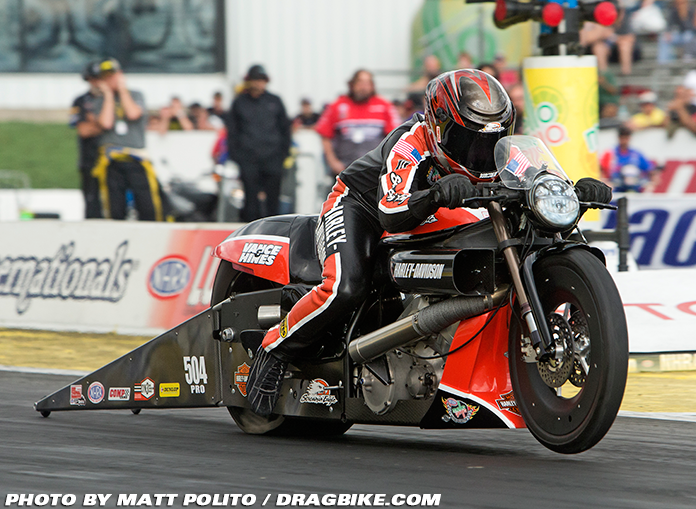 Others to watch include Hector Arana Sr., who has one victory this season, Jerry Savoie, Jim Underdahl, Angelle Sampey, Matt Smith and his wife Angie Smith. But Hines’ chief concern is getting better performance out of a motorcycle he knows can do better than it has over the past three races.

“We’re not getting worse, but we’re not getting any better right now,” Hines said. “The class has definitely stepped up. The Aranas have been fast and they still are, but we should be capable of going fast as well. It’s been frustrating not seeing the win lights but I know everyone at the shop is working hard to get this figured out as soon as possible.”

The timing of the issues couldn’t have been much worse but Hines and his team are no strangers to hard work. They put in ample time in making thorough changes before the 2014 season and it paid off with a fourth championship, which gives Hines confidence these current changes will also pay off.

With two wins at Route 66 Raceway, Hines has a chance to become the winningest Pro Stock Motorcycle rider at the facility as well.

“I’ve always enjoyed going there,” Hines said. “Route 66 is one of my favorites and one of the original stadiums of drag racing. All-around, it’s a good event and I definitely enjoy racing there.” 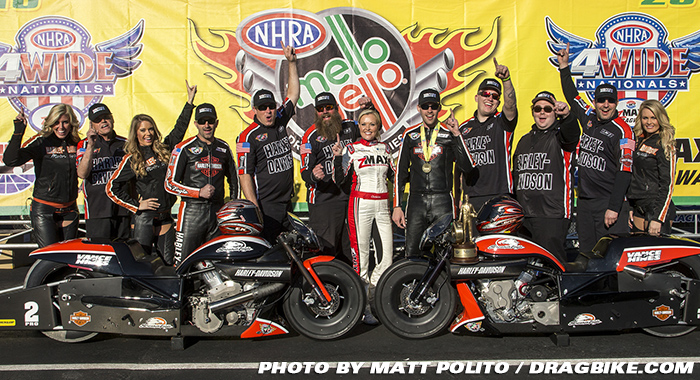