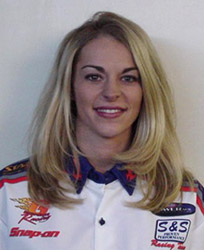 “When we looked at all the factors that make a successful rider, Angie was a natural choice, said Bryce. “She learns extremely quickly, and has the desire and motivation to be successful. The first time we met, it was obvious to me that she is willing to work hard and put forth the effort necessary to make this a career. I also know that Angie has what it takes to do a great job for any potential marketing partner.”

“Angie has been to our drag racing school in Gainesville (Fla.) three times, Bryce continued. “The first time, she did very well. The second time, she was even better, and by the third time, we were sold on her.”

In addition to the runs she’s made at Frank Hawley’s Drag Racing School, McBride is also the current Southeastern Motorcycle Drag Racing Association (SEMDRA) Outlaw class champion. She has run as quick as a 7.28 at over 191-mph on a bike with a small rear tire and no wheelie bars.

“It’s a dream come true for me to be racing with the Star/G Squared team, said McBride, a nurse who resides near Winston Salem, N.C. “I think everyone who’s ever raced a motorcycle wants to race in Pro Stock Bike. Even though my current bike is fast, it was big step up to ride a Pro Stock Bike. In my first few runs, my best sixty-foot time was 1.12 and then we made a few adjustments, and I had a 1.06. That’s when George asked me if I wanted to ride his bike this season. Obviously, it didn’t take me long to say yes. I can hardly wait for the season to start.”

As a rider, team owner and crew chief, Bryce has won over 60 NHRA national events and has claimed six season championships with the late John Myers (1990, 1992, and 1995) and most recently with Angelle Savoie (2000 – 2002). “If you look at our history, every rider we’ve ever had has done well, and I’m sure Angie will continue that tradition,” Bryce stated.

“George Smith (part owner and chairman of the board of S&S Cycle, the leading manufacturer of go fast V-Twin parts) and I have formed a new company, G Squared Motorsports, and we are working with S&S to refine our V-Twin program,” Bryce noted.

McBride will begin the season on the Suzuki that Collis rode last year, or the S&S powered V-Twin Pro Stock Bike that Bryce is developing along with partner George Smith.

“With all these new opportunities, this is the most excited and motivated I’ve been in years to start a new season!” said Bryce.