Another win for Barkley at the Badland’s Nationals!

Another win for Barkley at the Badland’s Nationals!

The fourth race of the CMDRA National Series was the Badland’s Nationals in Medicine Hat September 8-9th. Ethan has performed well at this track in years past and he was determined to carry forward his winning traditions. 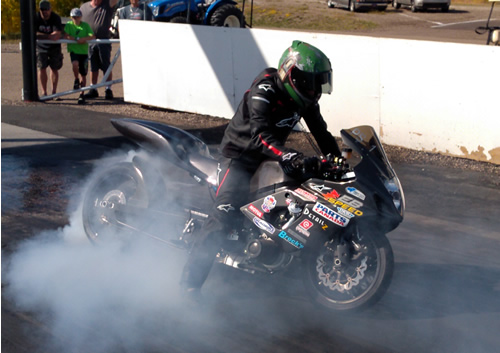 Saturday morning there was an open test session that the pro classes could enter but Ethan chose to sit on the sidelines and examine his competition and what the track could hold. All of his competitors chose to make a pass and it was pretty clear he made the right call as there was plenty of spinning tires and poor elapsed times when it was over. The afternoon test session had a better surface prep so Ethan went to make a pass with a medium tune-up and posted a 7.41 @ 192 mph! With that pass he set a new track record for the class which stood for over two seasons. Ethan was on the right track and opted to keep the settings relatively steady all day and work on the finer details of the chassis in order to make his turbocharged GSX-R1000 “Eleanor” easier to handle and more consistent. His three qualification runs were nearly perfect; 7.46, 7.49 and 7.45 all at 190 mph or more. This put him in the top spot and was over a full tenth of a second quicker than his nearest competitor, Dave Burleigh. 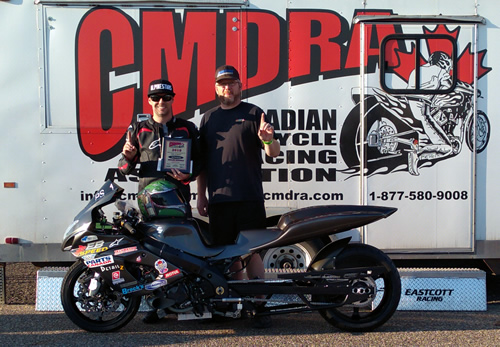 Sunday morning started off with a brief rain shower which put the entire program a couple of hours behind schedule. Ethan had a chance for a test pass in the early afternoon. The track was even better than Saturday so he turned up the boost in order to post a really low E.T. The bike left the line smoothly and the front tire hovered above the racing surface tripping the 60-foot timer with an incredible 1.201 second time. Unfortunately that’s when the good run ended as the bike wouldn’t shift into second gear and Ethan had to abort what was sure to be a great run. In eliminations Ethan chose to be slightly more conservative as to avoid mistakes that could potentially end in an loss to a much slower bike. In the semi-final it was another clean run with the scoreboards showing 7.36 @191 mph for the win and re-setting the class track record once again! Heading into the finals the decision was made to leave the settings the same and just make a clean error free pass. Ethan didn’t disappoint and ran a near duplicate run of 7.37 @ 190 mph to take the win over Dave Burleigh’s 7.58 @ 190 mph! 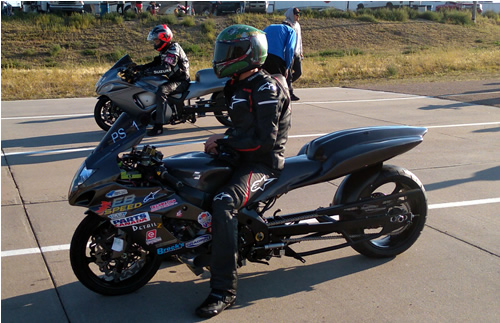 After another flawless weekend, Ethan was able to gain a substantial amount of points over his nearest competitor in the CMDRA Pro Street Championship standings. Going into the season finals in Mission B.C. Sept 22-23, Ethan merely needs to qualify in order to take his unprecedented 18th National Title.