Brock’s Performance of Dayton, OH, has announced its move of the corporate headquarters to North Carolina is complete. In addition, the business has expanded to include retail sales and service. 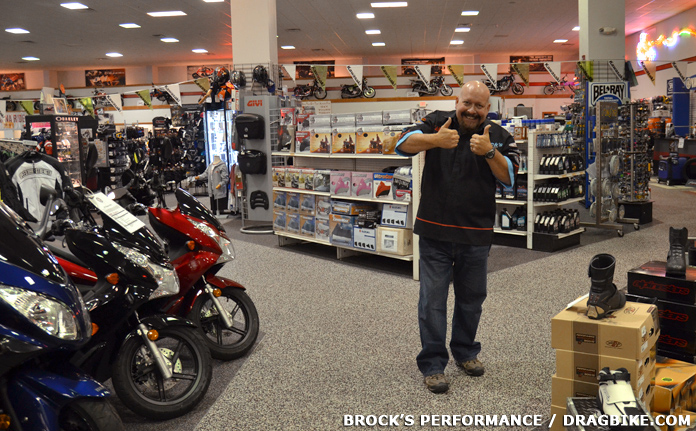 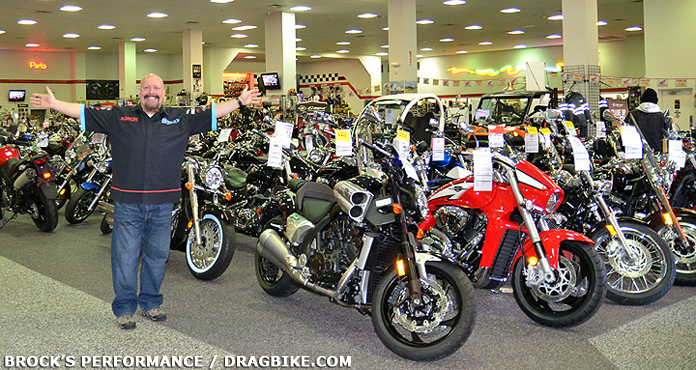 “People have been asking for years, so we now offer full-fledged retail services, including engine building with 24/7 dyno tuning, and featuring multi-line franchises. Since I purchased an existing dealership, there are a bunch of cruisers, side-by-sides and crap here now, but I’m going to sell that junk at auction and concentrate 100% on sportbikes,” said Brock.  “We will offer factory warranties and factory service.  We have already acquired a deal with GE Finance, which will allow us to offer .1% financing on any new motorcycle. You can buy a new Hayabusa for $500 down and pay as little $99 per month. And  because the president of State Farm is South African, my friends at BST pulled some strings so we can offer preferred insurance rates to our customers, even if there driving record isn’t the best! It’s a win-win for everyone. I’m truly blessed to know so many fine people in the motorcycle industry so I can pass these hook-ups on to my friends.” 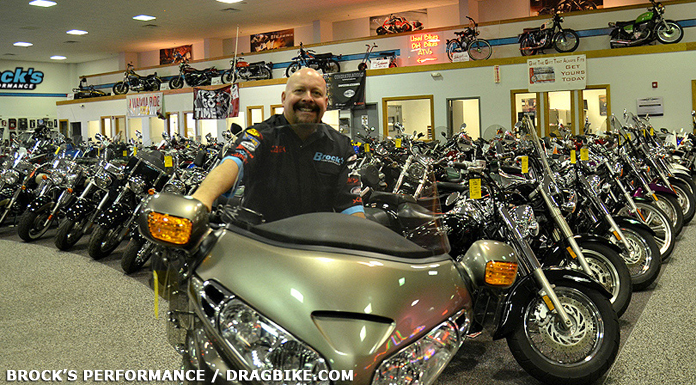 Service will be available around the clock, which Brock feels will be a trend in the industry.

“We know there is a market in catering to the grudge crowd, here in the Southeast,” said Brock. “Customers can come in at 3:00 AM after the night is over, and get their bike serviced by certified WyoTech graduates, while they relax in our lounge with big-screen TVs, wireless high-speed internet, streaming music and video games. We have already begun construction of a coffee shop with Hookah pipes, and I hope to have a cocktail lounge (with stripper poles, LED dance floor, state of the art light show and sound system we are told – Ed.) installed before the end of the year – we ARE in touch with our customer base, you know,” he says with a wink. 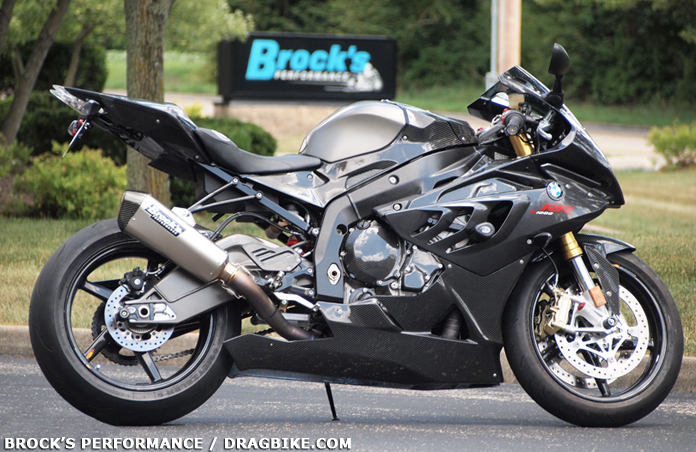 The most exciting aspect is Brock has partnership agreements with Suzuki, Kawasaki, and BMW North America to produce “Stock By Brock” signature lines of bikes.  “Stock By Brock” editions will be available for the Suzuki Hayabusa and GSX-R1000, Kawasaki ZX-14R and BMW S1000RR.  They will feature Brock’s Performance Alien Head exhausts and pre-mapped Power Commanders as well as clutch and suspension modifications.  The bikes will come with full factory warranties and money-back performance guarantees. 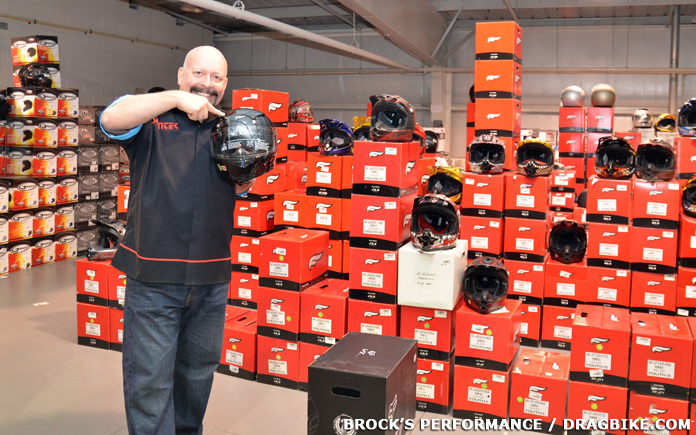 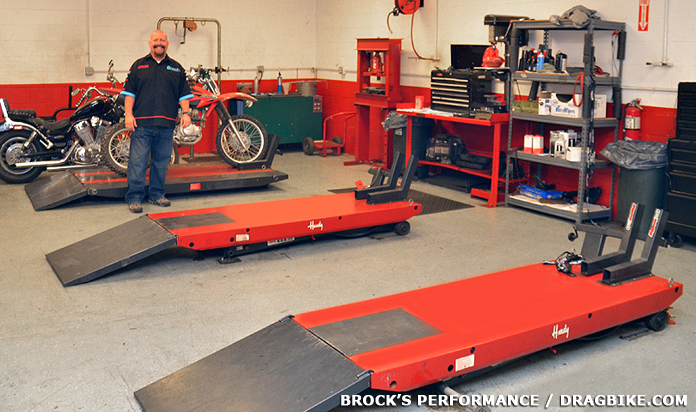 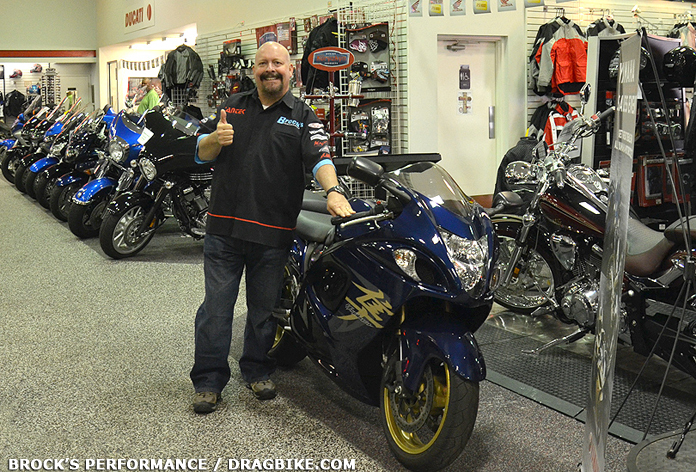 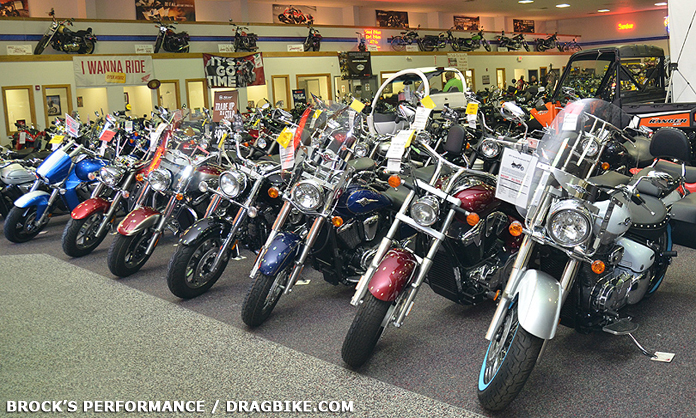 While the “Stock By Brock” line of sportbikes will be available at dealerships nationwide, similar to Yoshimura’s limited edition GSX-R750 program with Suzuki (except in California,) those purchased at Brock’s Performance corporate headquarters will come with an exclusive feature – certified performance.

Each bike sold at Brock’s will bebroken in on the dyno and then brought to the dragstrip where it will not be sold until it can achieve a specified minimum of performance.

“We have an exclusive agreement with zMAX Dragway to facilitate the performance certification process, continued Brock.  “They host many drag racing schools and have a trained, professional staff. They have hired legendary sportbike racer, Keith Dennis, to be the official certification rider.”

Part of the papers you get upon delivery of your “Stock By Brock” bike is a certified timeslip signed by Dennis.

In addition to being hired to certify the bikes, Dennis will run a motorcycle drag racing school at zMAX Dragway with four dates.