Ballistic Drag Racing-where it all started -the hunger for the Gold Tree. 1996 was the Nationals at Calder, back then I was 21 and had been crewing for 6 years as Crew Chief for Igor Krasnowsky in Pro stock Motorcycle. Calder was our home track and it always had big crowds and lots of entries. That year we won that event and it is a memory I have held on to ever since! Holding on to that Gold tree was something I wanted to do as owner rider. 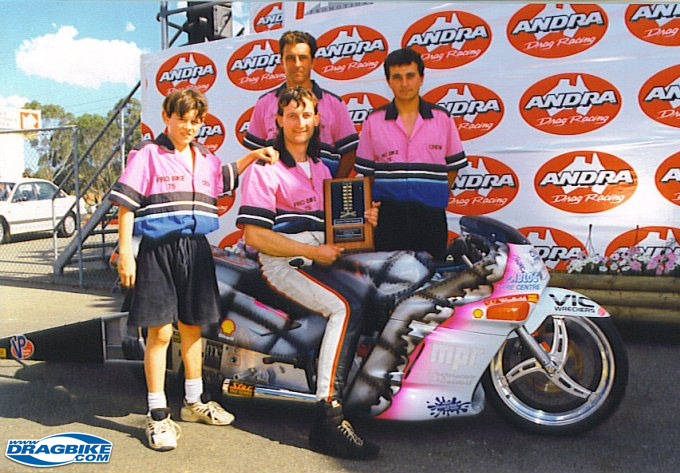 As Calder had not had the Australian Nationals in 16 years it was time to give my best mate Igor a call and tell him it was time to get the band back together! He agreed and this time he would be my crew- this would be a special year since it had been 20 years since we had won together at Calder Park.

Leading up to the Nationals was exciting. We competed at the Summit Round of the Andrew Rowe Memorial getting to the Quarter finals in Modified Bike and giving the race bike a good test. We participated in the ANDRA activation at Southbank on Wednesday and enjoyed meeting spectators who were looking forward to the big event.

Saturday arrived and I was pumped to get out to the race track. Calder was alive with the hum of race vehicles and spectators flowing through the gates. I was pleased that my sponsors and family and friends could travel a short distance to watch me race. They had such a great time that they were there all day and stayed til my last qualifying run after 9pm.

Qualifier one was around lunch time and I was nervous but that was not unusual for me. With a seven bike in Comp bike I would have to try my best. First run was a 7.90 and we where number one qualifier after the session– a good place to be but I wouldn’t stay long short shifting every gear– I had a lot to improve on.

Qualifier two was similar- the bike just seemed to have no power and again I short shifted all gears going 8.00 sec and finding myself in number two spot behind Brett Ghedina who ran 7.669 at 165.38MPH. It was time to work out what was going on and reviewing the data I decided we needed more fuel pressure.

Qualifier three was Do or Die as a seven bike field would have Brett with a bye in the first round and a harder run for me to the final. I knew Brett had a lot of power up his sleeve but was likely to be saving it for racing. I managed a 7.74 at 164mph, nowhere near where I wanted to be but got me just under my index. Brett would stay top qualifier and I would enter eliminations as number two. We scratched our heads as the bike was still not running as it should. The data logger not telling us what we needed to know, but we were happy that the bike was together ready for race day. 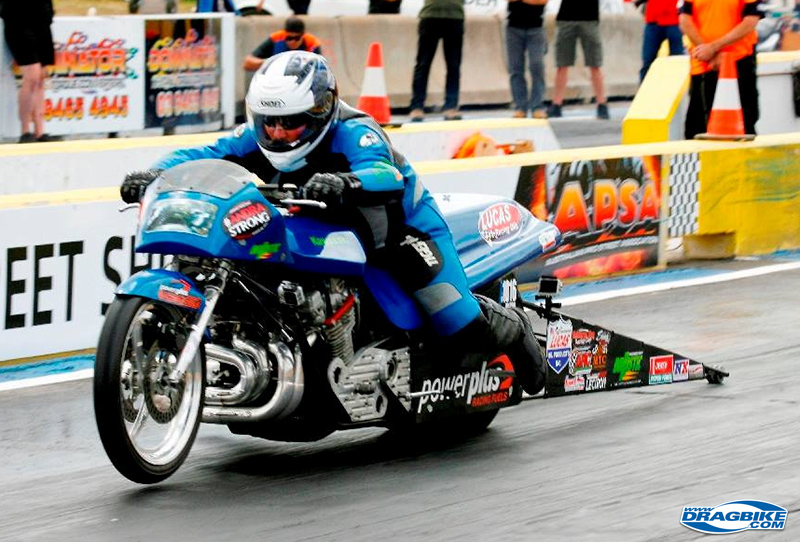 A cup of camomile tea before bed and I jokingly said to my wife, Co-crew Chief Katie, ‘he (Brett) can have the top qualifier medal but I want that gold tree!”. Slept like a baby and woke to the sound of the rain hitting the tin roof. My heart sank and I began to think that I wouldn’t get an opportunity to run in front of my home crowd and get that prestigious trophy. To my surprise when we arrived at the track the rain had cleared and racing had begun.

Our first round was to be against Corey Scholes, three times Australian Nationals winner. He had problems in qualifying, but I knew he wasn’t to be taken lightly. Corey had a 8.90 index to my 7.90 index, I would have a second to wait at the tree. As we went in to pre-stage all I was thinking was ’don’t red light!’. There was no chance of that with a 0.293 reaction time. Corey took off and encountered problems at the 330ft mark. I went through the traps with a 9.37 at 127mph well over my index. 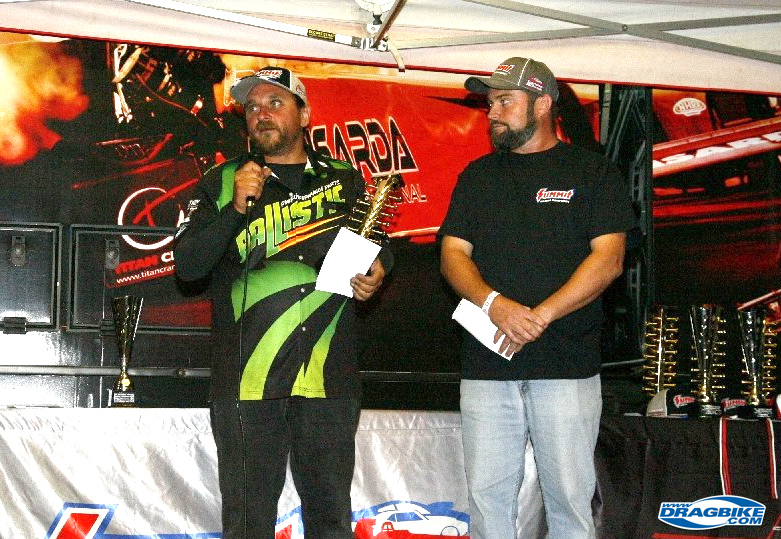 What a relief– I was through the first round and into the semifinals. The adrenalin was well and truly pumping. A reasonably quick turn around and we were up against Niki Z on the VRod Comp Bike. Niki had a 8.89 index and mine was still the same. After a bit of a staging dual and a slightly better light from me this time, I had a chase before me with Niki drilling me on the tree. I caught her within inches of the finish line beating her by .0385 and running 7.785 which would re-factor my index for the next round. That was close– too close! I couldn’t believe that I had won and was going to be in the final.

We made a dash back to the pits to refuel, replace batteries, and put in a fresh bottle of nitrous. The pit change was the quickest we have done in some time. Back out for the final immediately and we would meet the number one qualifier who had not touched his index. I was determined there would be no repeat of the final at the Winters. This was going to be my race. The heat was on. My focus was to cut a light and not red light. Once again there was no chance of that! He got me on the tree with an .049 to my terrible .205. As luck would have it I had a very strong, straight pass and ran 7.80 off the gas. For some reason I thought I had passed him and left him for dust so I backed off– for absolutely no reason whatsoever! It seems he had three goes at getting third gear and was back on my tail before I knew it. The margin of victory being 0.0126. I didn’t realize I had won. 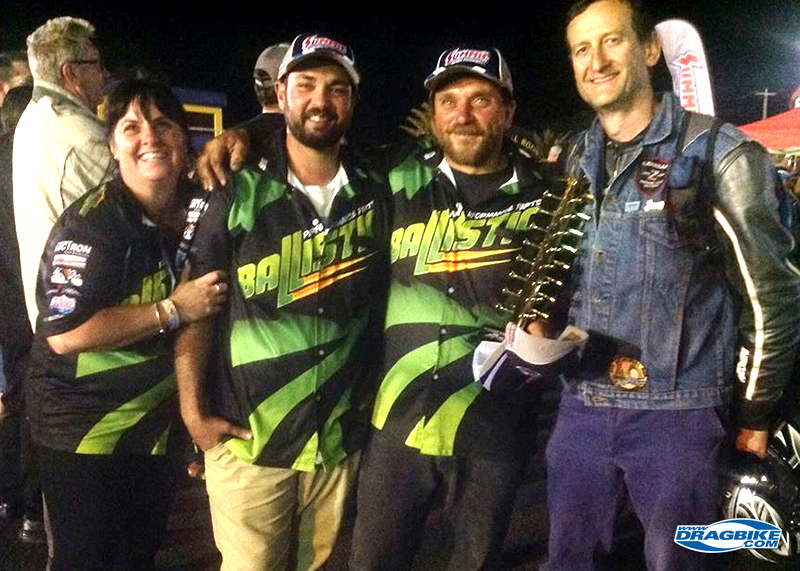 After 20 years of racing and facing some challenging moments I was thrilled to win the Australian Nationals and receive that prestigious ANDRA Gold Christmas Tree. I couldn’t do it without the help of my crew, Shaun Micaleff, Igor Krasnowsky and my wonderful wife Katie, and the support of my sponsors, Lucas Oils Australia, Denso Autoparts Australia, Powerplus Race Fuels, MTC, Shinko Tyres, ARC Heat and Lectron Fuel Parts.