Coming off the stellar performance of the previous event in Rimbey, Ethan was more determined than ever to keep up the momentum as he arrived at Castrol Raceway for the CMDRA’s Oil City Nationals single day event. His Parts Canada backed GSX-R1000 “Eleanor” was running better than ever and was ready to tackle the full 1/4 mile strip. Minor chassis improvements were made for the race including new offset triple clamps and another inch of wheelbase. “Everything was working really well in Rimbey” Ethan said, “I only want to make subtle changes going forward as not to upset what works”. 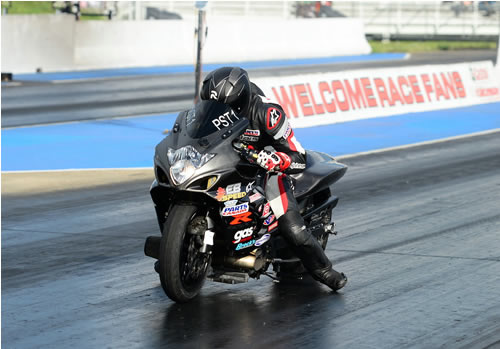 Barkley tucks in and holds the throttle wide open on his way to another record setting 7.2 second / 190+ MPH 1/4 Mile pass!

According to the forecast the race was in jeopardy with showers expected on and off throughout the day. In the morning test session the tune up was kept very mild in order to get a feel for how much grip was available and how the new triple clamps felt at full speed. Ethan cruised to a effortless 7.6 / 182 mph pass, the bike felt perfect, time to turn it up! The single day event produced some challenges as the tighter schedule makes for less testing time and only two rounds of qualifying so the team couldn’t afford to waste any runs. 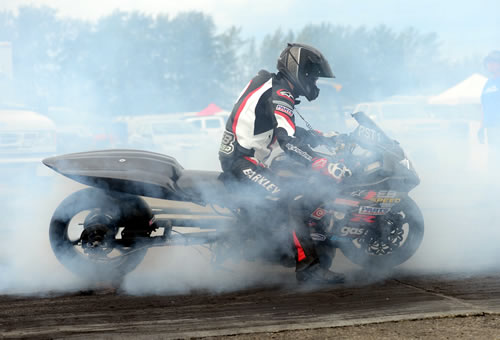 Even in the cloud of tire smoke, Ethan remains focused on the task at hand!

The opening round of qualifying was set for mid-day, and Ethan wasted little time making his mark. With a more aggressive tune-up he left the line very cleanly and accelerated incredibly quick and at the finish line the scoreboards flashed 7.28 / 186! This would eclipse his best ever pass and was now the quickest CMDRA Pro Street pass ever! Ethan and his crew chief Tom couldn’t celebrate long as they needed to get back to the pits and prepare for the second round of qualifying. With only 60 minutes, they had to check the clutch and also find out why the speed was so low as they were expecting 190+. For round two Ethan made some fuel changes to the Motec ECU and hoped to get some of the down track speed back. The second qualifying pass was practically a carbon copy of the first. The elapsed time came up; 7.26/190 a new CMDRA 1/4 Mile E.T. Record! 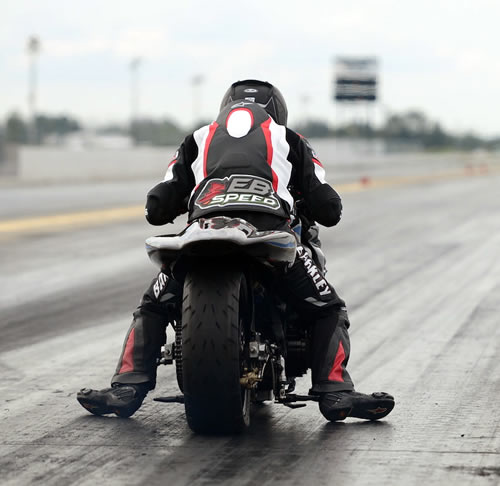 With the new record in the books Ethan focused on the tuning for the eliminations. The next two rounds of eliminations were a little slower than the records at 7.37/191 and 7.32 / 190 respectively. Still great passes but not what Ethan was expecting. It seemed that the high humidity was sapping some power from the air and the bike just wasn’t accelerating as quickly as earlier in the day. Ethan studied the data from the day and decided to increase the amount of boost in the first 3 seconds of the run. Ethan lined up against Rob Aston aboard his turbocharged Hayabusa. The tree lit up and Ethan was gone like a shot. The run was clean and the increased power lofted the front tire over a foot in the air as he shifted into second gear! It was a straight pass and Ethan stayed in his tuck until the finish line where the time flashed 7.24 / 192.88 vs. Rob’s 7.52 / 185. Ethan reset the 1/4 Mile E.T. record for a third time in one afternoon! It was an epic way to finish an amazing day at the races! 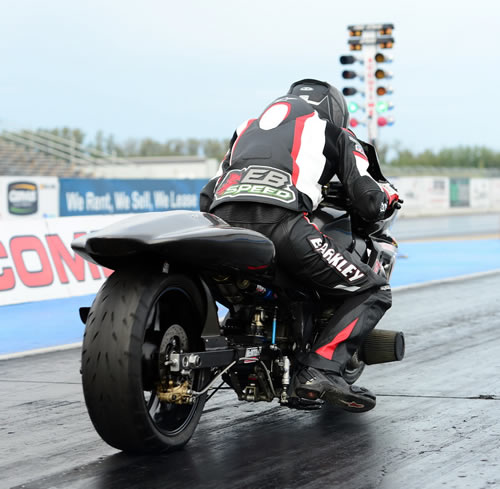 Barkley leaves the line enroute to a record setting 7.24 / 193!
The Oil City Nationals were a complete success with the two qualifying passes and the three eliminations runs all within a tenth of a second and there is more to come Ethan explains; “At the moment the chassis is still rather modest, if the conditions are right in the next events Eleanor will be longer and lower allowing more boost to be applied earlier”. Next up, team EB Speed heads back to the MHDRA’s Strip in Medicine Hat August 20-21.