HomeTeam ReportsBarkley comes out on top at the Badland's Nationals!

Barkley comes out on top at the Badland’s Nationals!

Barkley comes out on top at the Badland’s Nationals!

After a long winter Ethan was back on his record setting turbocharged GSX-R1000 at the CMDRA season opener, the Badland’s Nationals in Medicine Hat Alberta. EB Speed has stepped up to sponsor the class and this increased purse has helped entice a few new faces into the mix. 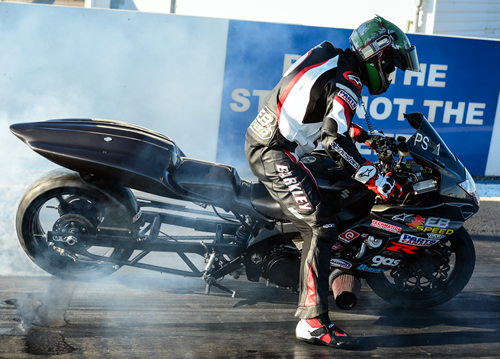 Ethan warms up the tire before his first run of 2017!

Over the off-season Ethan updated many key components on his motorcycle including the turbocharger, boost control, swing arm as well as a new engine. It’s all in the pursuit of staying on top of this increasingly competitive class. Unfortunately Ethan was unable to test any of these new parts on a track prior to this event, so he was going into it with an unproven setup. Even with this challenge he came out swinging in the opening round of Saturday’s qualifying session but had the bike set up a little too aggressive and spun at the start line. For round two Ethan softened the initial boost and made a clean getaway, posting a respectable 7.68 / 183. Round three was late in the evening which made for great cool air but the track surface was also very cool, this prevented Ethan from improving on his earlier pass as he spun early in the run.. He ended up qualifying #2 behind arch rival Rob Aston who posted an impressive 7.58 / 179 earlier in the day. 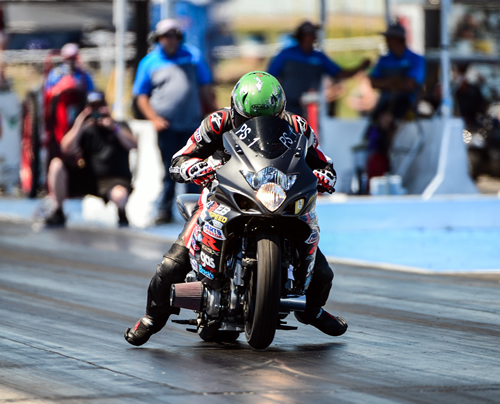 Ethan poured over what little useable data he had from Saturday in hopes of improving his times come Sunday’s eliminations. Number one qualifier Aston had a bye in the first round but he was nursing a hurt motor and would only be able to break the starting line beams to earn his 20 round points but his weekend was over. Ethan was lined up against fellow EB Speed rider Danny Green who is new to Pro Street but not new to turbos or drag racing. Danny was off pace on Saturday but had found some issues and was running low 8’s in Sunday morning’s test session. Ethan couldn’t take him lightly as anything could happen with the ever improving rider. Putting in a moderate tune, Ethan cruised to victory with a 7.73 / 178. Even though the run wasn’t a record setting time or speed, the team gained very valuable data on “Eleanor’s” new configuration. This was really the first “clean” pass of the weekend, something they desperately needed and could build on.

In round two Ethan had a bye run, so he elected to try some other new parts, a lightweight version of the MTC Engineering Gen II clutch he has used for a few years now. The rest of the tune was left the same as he wanted some back to back data to see how the new unit worked. He left the line smoothly and posted 7.71 / 183. It was clear the new clutch was better than its predecessor due to the improved elapsed time and speed. Ethan wanted to turn up the boost and put up a great number for the fans but he also noticed the very high track temperatures were wreaking havoc on the start line with rubber beginning to peel off the concrete surface…not good! At this point Ethan had to make the call to play it safe and go for the win, not a record. A modest tune was left in the bike as he faced off against newcomer Gary Henault aboard his turbocharged Hayabusa. Ethan had another clean launch and the bike was very stable the entire run and the scoreboards flashed his best pass of the weekend; 7.61 / 184 for the win! 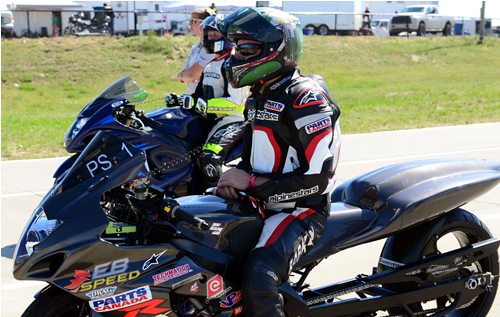 Thinking of his next move before he heads up for the finals!

It was a great way to end the challenging weekend. Although the times weren’t as quick as Ethan had hoped for, all in all it was a productive weekend. Ethan was already looking forward to the next race which is only two weeks away where he looks to turn things up in his quest for more hardware! 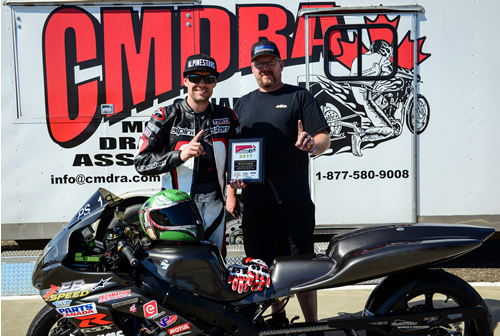