Barkley comes up short at the CMDRA’s Season Opener! 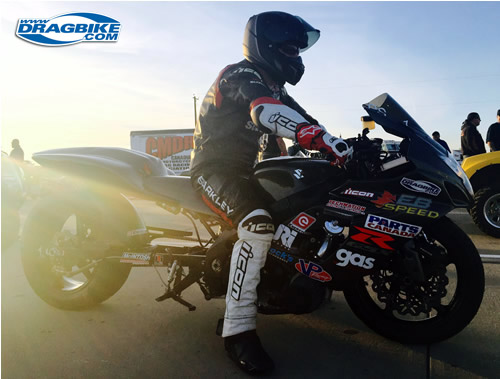 Barkley comes up short at the CMDRA’s Season Opener!

After a long winter off, Ethan Barkley was back in the saddle of his Parts Canada backed turbocharged GSX-R1000 “Eleanor” for the CMDRA’s 2015 season opening Badlands Nationals at “The Strip” in Medicine Hat Alberta on June 6-7th.

Minor updates were performed on the program as the bike was working really well last season earning his 14th Championship and a speed record at the final event. Straight away the results were positive as Ethan posted a solid 7.81 / 182 on his very first pass of 2015. The track surface was decent so it was decided to gather data over the course of the day and try some new clutch setups that were developed on paper over the winter. The plan was to keep the boost levels the same and simply make some clutch and launch adjustments. As the day wore on, the times kept coming down pass by pass; 8.7, 8.6 and finally an 8.54 at 188 MPH in the final qualifying round with a little help from the cooler evening air. This was a great run considering the relatively modest tune up that was in the bike. Not only was this good enough for the #1 qualifying spot in Pro Street, but was the quickest and fastest motorcycle of the day regardless of class!

Sunday started off great and the track was in good shape. The morning test session Ethan mad a slight adjustment to soften the power delivery between shifts but that didn’t work as expected even though time was a good with a 7.7 / 185 mph pass so the tune was put back to the one from the evening qualifying session. Since he qualified in the #1 spot, Ethan had the first round bye and made a smooth straight pass 8.6 / 185. In the finals Ethan was facing Dave Burleigh on his newly acquired turbo Hayabusa who was edging ever closer to the 7’s with every pass. Not one to mess with success, Ethan left the tune up the same since he had a wide margin over Dave. Unfortunately in the burnout box the cam chain snapped, killing the engine and damaging the internals, forcing Ethan to watch Dave take the solo pass to the win. 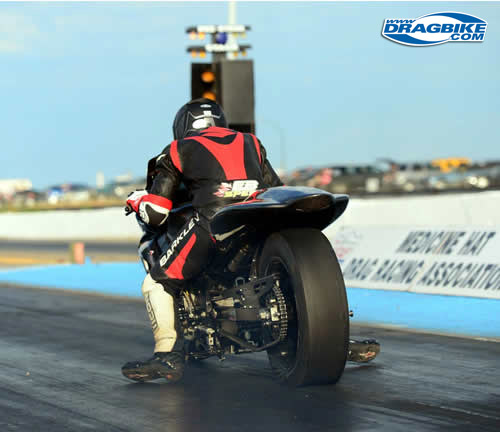 Even though Ethan missed his shot for the win, the team came away with some great data as well as the confidence that the championship winning program is right where it left off last year. Now the race is on in the EB Speed shop as the team hustles to repair the damaged engine in time for the Pacific Nationals in Mission B.C June 20-21st.