The 2016 CMDRA season kicked off in Medicine Hat, AB June 4 -5 with the Spring Nationals. It’s been 8 long months since Ethan’s historic record setting weekend at this very track and he was poised to pick up right where he left off. The Parts Canada backed 500 horsepower turbocharged GSX-R1000 “Eleanor” of EB Speed worked so well last season that only a few minor updates were made over the winter. 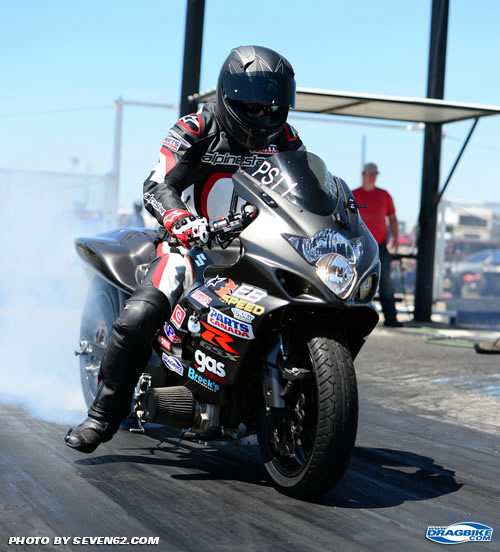 Barkley smokes the rear tire in the burnout box!

The temperature at the track was very hot soaring well into the mid 30’s and thus made for a tricky surface and very poor air density in which to tune the bike while trying to make maximum horsepower. Ethan and his crew chief Tom decided to run a conservative strategy and go with a reliable tune up that the track would hold. In the opening round of Saturday’s test session Ethan was right on track, posting 7.7 / 180 on his very first pass! The team now had a solid baseline to tune from and began to chip away during the 3 rounds of qualifying. The end result was a solid 7.50 elapsed time and a 1/4 mile speed of 192.42 MPH. Unfortunately this wasn’t quick good enough, as top spot went to Rob Aston with a 7.42 second elapsed time. 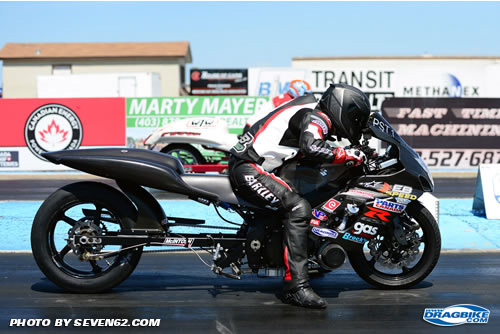 Staging slowly while bringing up the revs to build boost!

Sunday morning Ethan had a plan to slowly add power to the existing tune and see if they could shave off a little bit of time as he and Rob would head into eliminations in the afternoon. On Barkley’s opening pass he posted an improved 7.47 / 190…things were looking up. For 2016 a best of 3 elimination bracket was created to increase the amount of passes for both the riders and fans. Tom and Ethan had a plan to slowly keep adding more power to “Eleanor” given the heat on the racing surface. Their plan worked perfectly as Ethan posted 7.45 / 192 over Rob’s 7.589 / 185. The only problem was that Ethan left the start line .013 seconds too soon and lost the race on a red light. This was Ethan’s first red light foul in over 4 years! It was a tough loss but the EB Speed team went back to the pits determined to get the win in round 2. Rob had lane choice over Ethan with his win and put Ethan in the right lane again, the poorer of the two. Ethan had a good advantage with his quicker reaction time, but the rear tire just wouldn’t hold in the heat of the right lane and it spun on the 1-2 shift, putting Ethan at a serious disadvantage. Rob leapt out ahead a few bike lengths but Ethan was reeling him in as the two closed in on the finish line with Aston crossing first with a 7.42 / 187 to Barkley’s 7.49/192! A very close race with the margin of victory a mere .039 seconds! This was the first side by side 7.4 second pass in CMDRA Pro Street history! It was a tough loss for Ethan as he knew he had the power to win, but missed the tune up slightly. Now that Rob had won the best of 3 format, Tom and Ethan could try something a bit more radical for the final pass. They opted to try a lighter clutch tune and add even more power at the start of the run to see how the chassis would react. It was a great decision as “Eleanor” left the line and perfectly hovered the front tire a couple inches off the surface for a a hundred feet! Ethan let off the throttle a little early as not to tax the motor yet still ran 7.47 /192 to Rob’s 8.84 /114! The first half of the run was the quickest the bike had run all weekend and gave the team the confidence that they were on the right track with the clutch strategy. 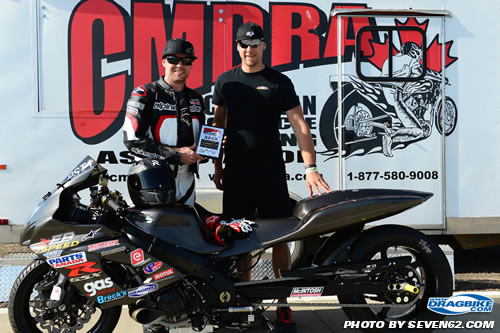 Ethan and Tom with the runner-up plaque.

Even with the loss the team held their heads high knowing they had the most consistent bike of the class but the red light in round 1 proved to be their undoing. At the end of the weekend plenty of valuable data was recorded and it will be put to good use at The Summer Nationals in Rimbey, AB. July 23-24th.