HomeTeam ReportsBarkley takes the win and is the quickest bike at CMDRA in...

Barkley takes the win and is the quickest bike at CMDRA in Medicine Hat!

The TS Signs Printing & Promo backed rider Ethan Barkley was still on a high from his 6 second runs a couple of weeks ago as the 18 Time Canadian Champion was racing close to home at the CMDRA’s event in Medicine Hat. His goal was to push the limits of what can be done of Canadian surfaces. Without a doubt his turbocharged GSX-R1000 “Eleanor” was working better than ever and for that reason Ethan elected not to participate in the Saturday morning hour-long pro test session. “She’s running perfectly, it makes no sense putting any more passes on the engine than absolutely necessary” Ethan stated as he watched the other pro racers make their test runs. 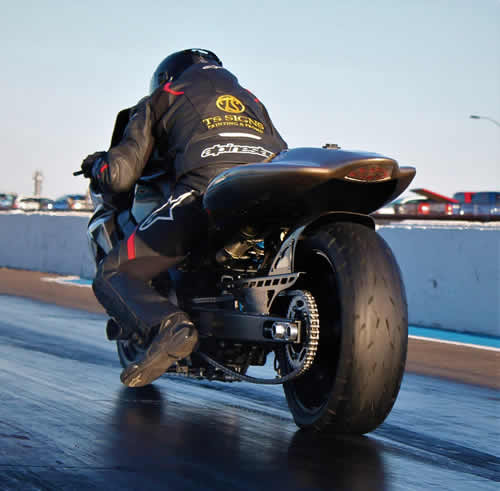 On his opening qualifying pass he went back in his notes from 2018 and installed a proven tune that should go down the track with ease. It was nearly a clean run with a good bit of wheel spin on the 1-2 shift, forcing Ethan to chop the throttle to 50% in order to recover traction. Even with the traction issues the run was still impressive, 7.41 @ 190 mph. This pass easily held him in the #1 qualifying position. 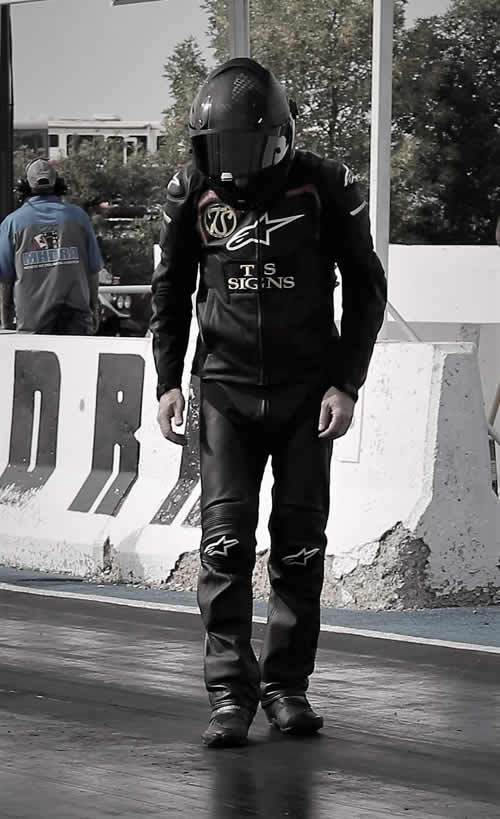 Ethan watched as other teams fought to get the power down on their runs, thus he chose to sit out the next two rounds of qualifying as the track began to cool which would only amplify the lack of grip. Sunday things were looking better with improved levels of traction at the start line so Ethan decided to turn up his tune just slightly to see what the track would take. It was a wise move as he laid down a stellar run, 7.30 @ 190 mph! This run was a new track record for Pro Street from his previous best of 7.36 from 2018. In round two Ethan was trying to go even quicker but the rear tire spun a bit at the start, resulting in a slow pass but he still managed to make it to the finals. Not one to make the same mistake twice, Ethan wisely chose to turn down the launch rpm and boost settings in order to make a nice clean pass. His tune was perfect as he cruised to victory with a stellar 7.33 @ 191 mph. 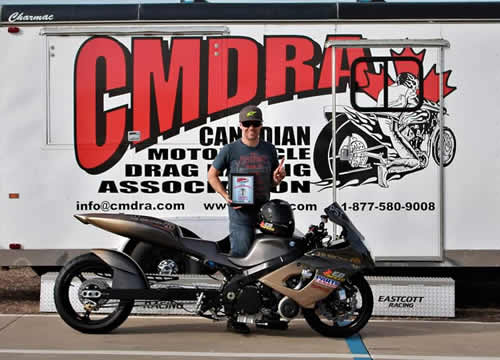 Barkley takes another win with the CMDRA!

It was a great weekend of racing for Ethan as he proved the new chassis design on Eleanor can work both in Canada and the USA. His 7.30 elapsed time was nearly two tenths quicker than any other bike at the event. The 191 mph speed he achieved in the finals was almost 20 mph quicker than the next closest competitor. He is looking forward to the CMDRA season finale event in Mission September 21-22. Stay tuned to Ethan’s social media feeds for updates at the event.