Michigan racer Mark Paquette already had the McIntosh Machine & Fabrication Pro Street championship in the bag before a wheel ever turned this past weekend. After skipping the Huntsville opener, Paquette won every single round in a dominant performance on his McIntosh/MPR Suzuki Hayabusa. 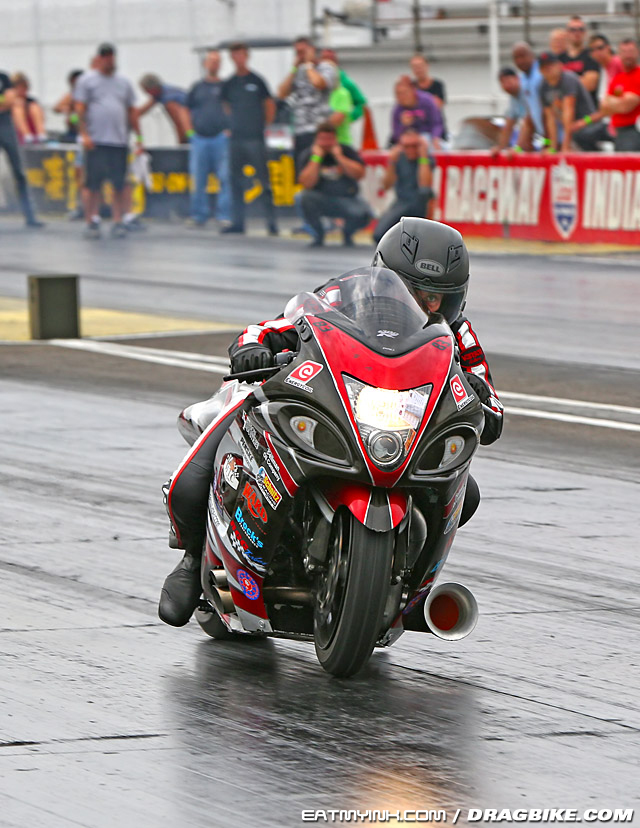 Paquette qualified number one with a record-setting 6.75, then sweetened his season by winning $5000 in Saturday’s Big Money Pro Street Shootout. Twenty-eight of the world’s quickest streetbikes showed up for the Shootout, with Paquette beating three-time MIRock champion Rodney Williford—riding John Drake/No Fear Racing’s “The Truth”—in the final of the biggest Pro Street race so far this year.

The final of Sunday’s points-paying eliminations was deja vu all over again as Paquette once again beat Williford with a 6.807 at 215.79 mph to Rodney’s 6.97. Both riders raced through an incredibly strong field to get there, as all eight bikes in round two ran 6-second passes at over 200 mph. 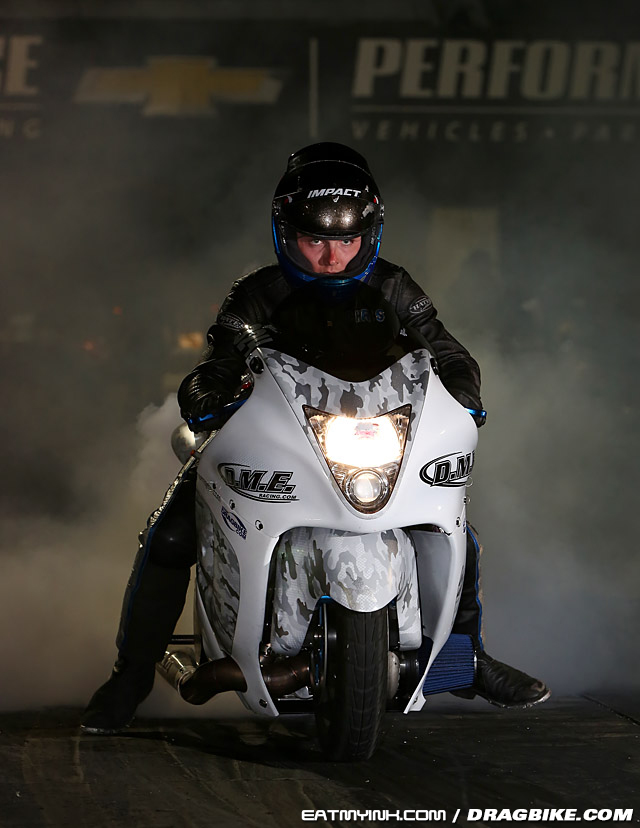 Not many eighteen-year-olds have a Pro Street win on their resume, but DME Racing’s Chris Connelly Jr. does now after winning Pro Street B. Connelly was one of many riders who ran their first 6s this weekend, running 6.98 at 203 to beat Jeremy St. Julien in the final.

But opponent Chris Cutsinger had his turbo-’Busa funnybike sitting back on the wheelie bars and running full-tilt boogie all day raceday and was giving no quarter. 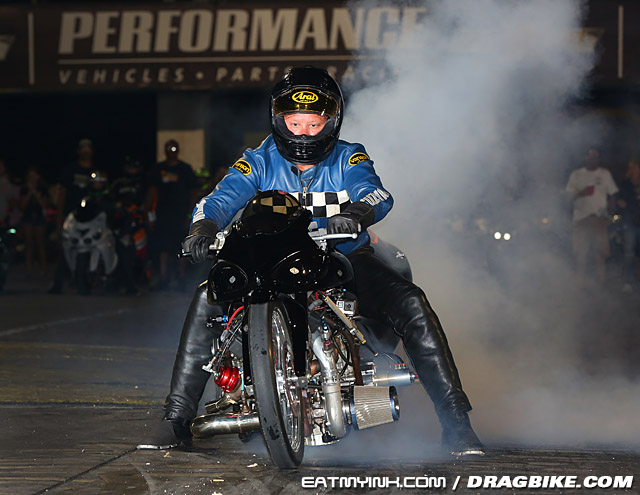 Neither was Rudy. When the additional boost ruptured the plenum, Rudy set to work installing bolts and a strap. It wasn’t enough. After running a 6.49 low ET of the meet (along with a 210 mph trap speed—both personal bests) in E1, Cutsinger slowed to 6.60 in the final, but Rudy’s injured mount couldn’t respond. Cutsinger took the win and the championship.

The whole NHDRO family continues to wish Pops a speedy recovery and look forward to seeing him back on his badass Quicktime ‘Busa in 2017. 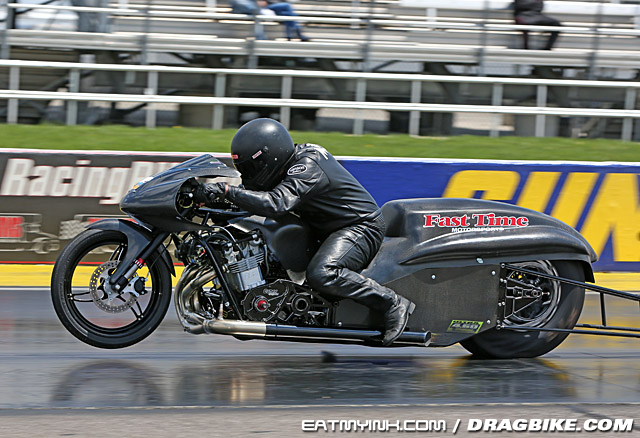 Fast Times Motorsports rider Chase Morris came into the finals quite a bit behind Jeff Lindeman in points—until a race was dropped, as per this year’s rules. Lindeman’s championship hopes were wounded (terminally, it turned out) when he lost to Ricky Scott Jr.—riding Randy Butler’s August race-winning bike—in E1. 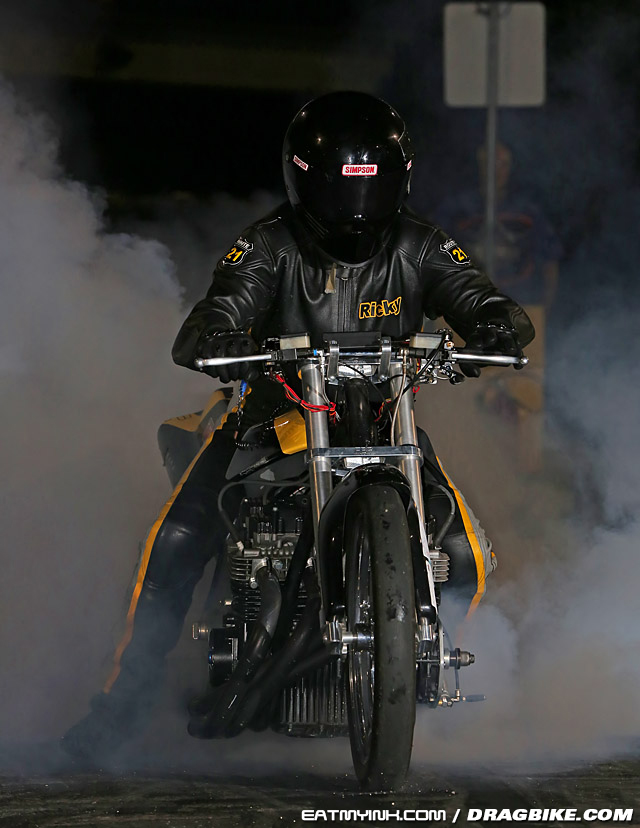 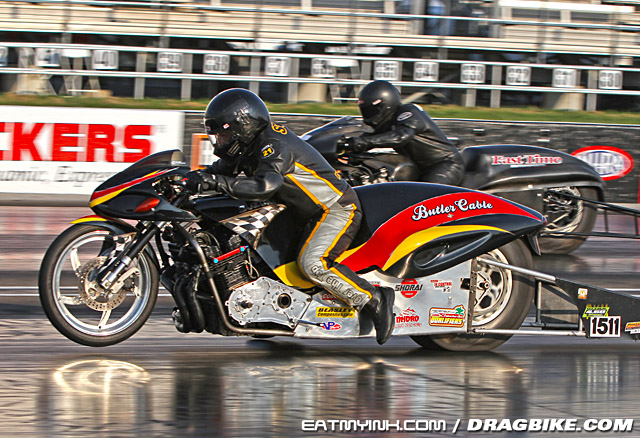 Heather Baldi unpacked at Indy with the G&G Metal Spinners Top Gas points lead, but kicking a rod through the side of her motor was a poor start to the weekend. Then a motor donated out of sister Rachel Wagner’s Super Comp bike sustained head damage, keeping dad Mike Wagner up most of the night Frankensteining something together.

Heather’s ability to defend ended early on raceday with a round one breakout 8.13 against the 8.20 index. From then on it was hope against hope as perennial champion Greg Mallett went round after round—regaining the lead he lost in August while recovering from surgery. 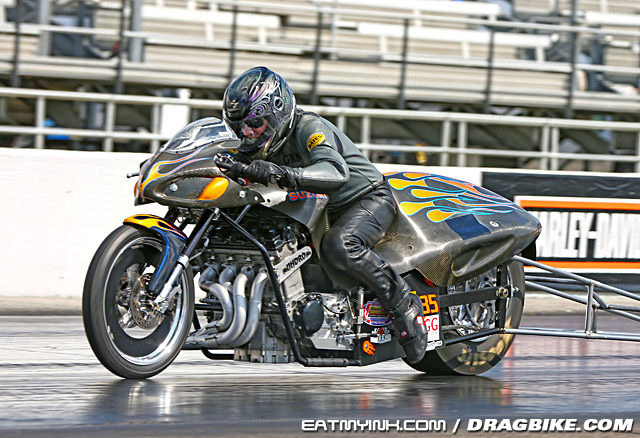 Mallet broke out and lost to Joe “Walk Off Home Run” Deck in the quarterfinals but went deep enough to win another championship. Deck went on to finally escape the batter’s box and clean-up the win in a double breakout final against Ron Morris.

Jeremy Teasley’s run at a second Top Gas win on his streetbike ended in the semifinals, but he did bring home the big check in Millennium Trailers Super Comp. Teasley took the tree against fellow finalist Scott Shepard and kept just enough at the finishline for the win in the 8.90 index class. 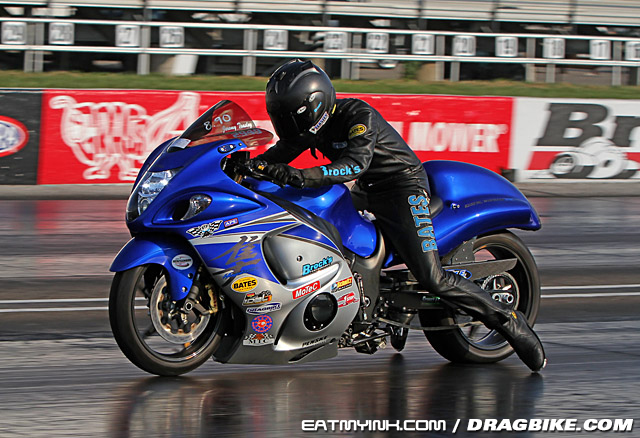 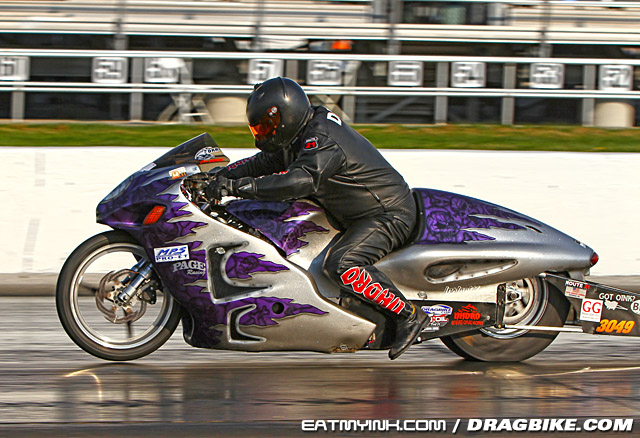 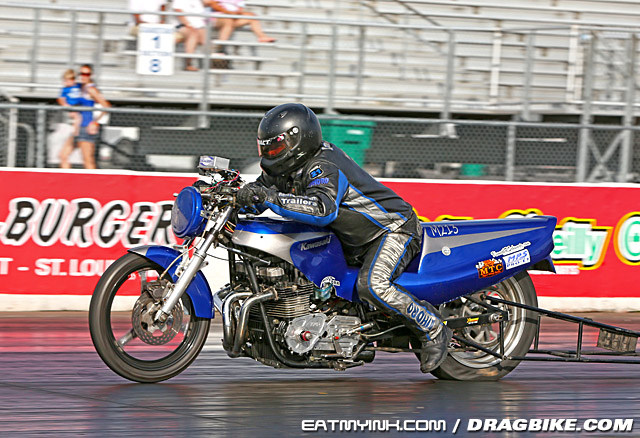 Moran and his dad Bob swept both MPS Pro ET wins this weekend, with Bob’s coming on Saturday and Eric’s Sunday. The final round victim of both Morans was Iowa’s Bruce Damewood. Sunday’s race saw some epic reaction times, with Eric having a .005 and Bruce an .014. 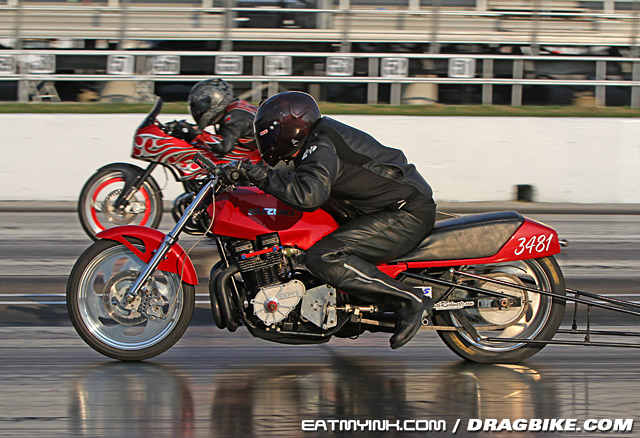 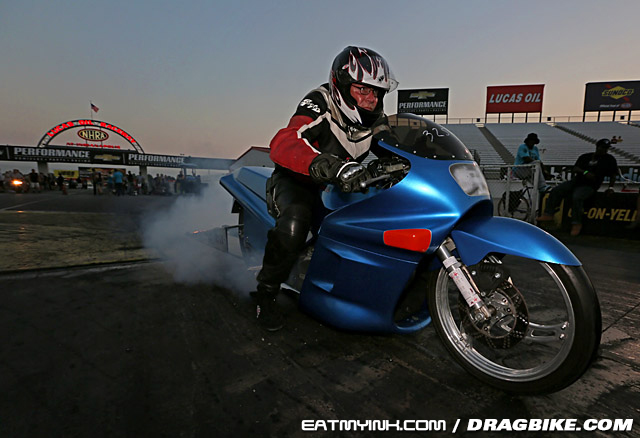 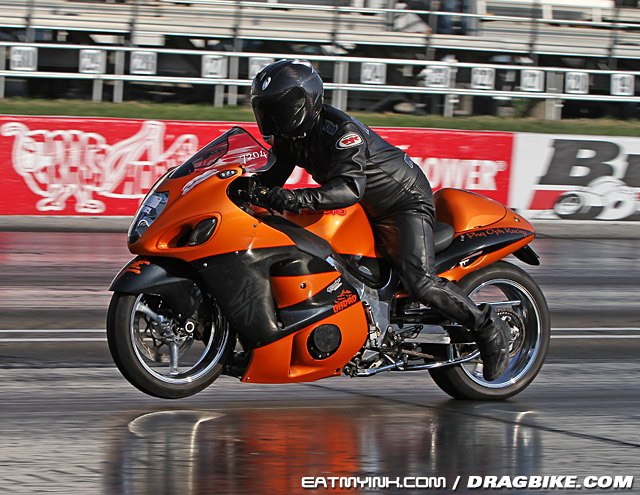 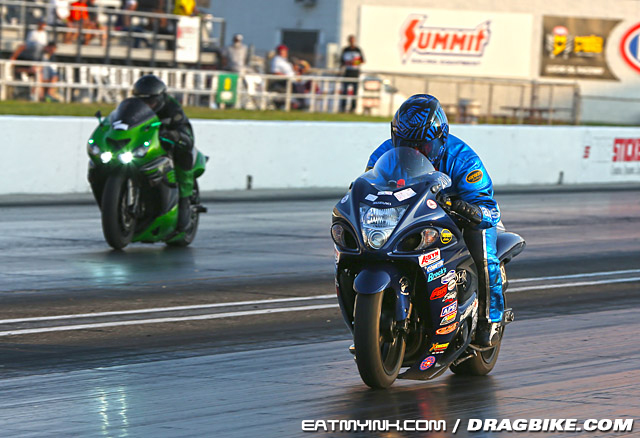 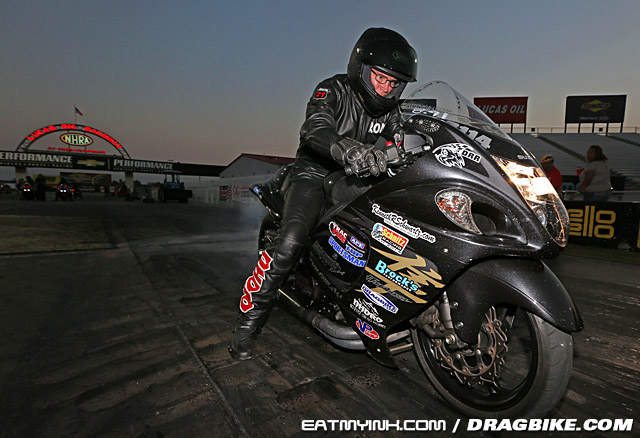 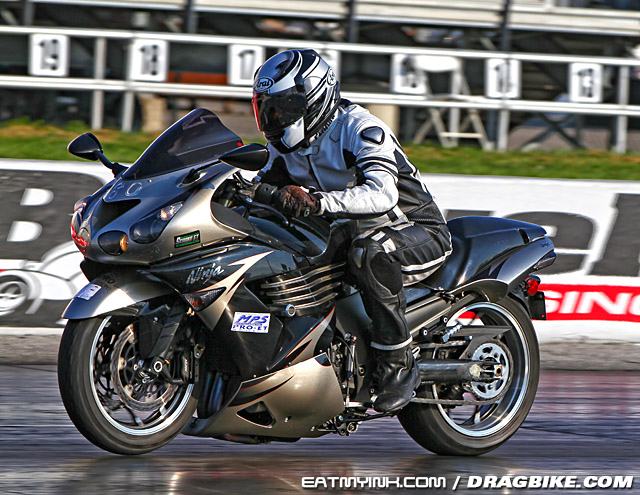 It was a perfect evening for the large field of Grudge bikes to log pass after pass, with the night ending with a money race featuring Joe McCoy and Midwest Cycle Concepts taking the win over 8 Below’s Can Man. 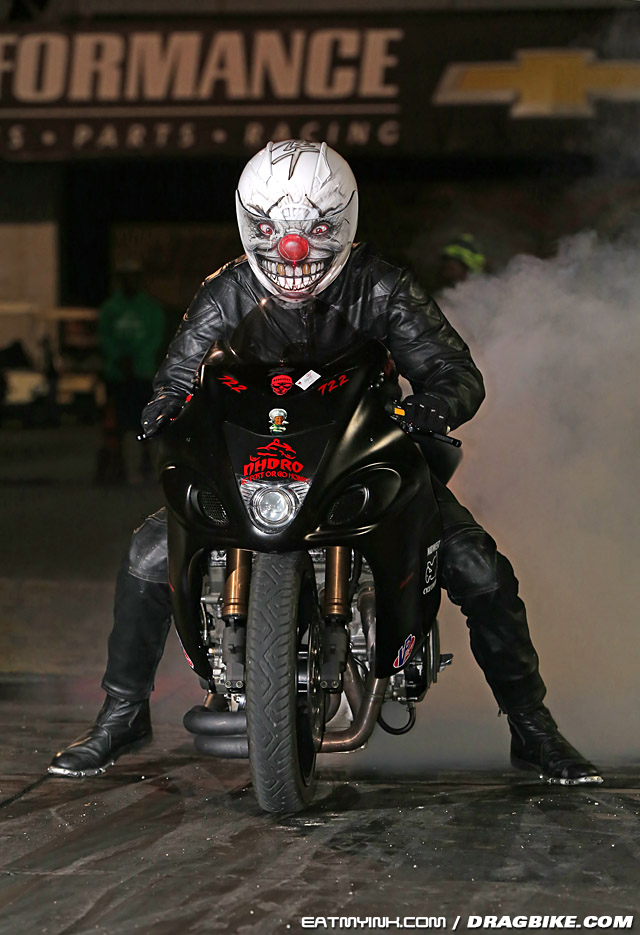 Brian and Niki Welch gratefully thank all of the NHDRO family of racers and sponsors for their support and look forward to announcing the 2017 schedule soon as the Midwest’s largest motorcycle drag racing series continues to grow and deliver.