Bikes in the Valley: Race 2 Results from Lebanon Valley

Orient Express Bikes In the Valley
Lebanon Valley Dragway
May 26, 2018

Large fields of riders took advantage of the warm weather for the race and it got interesting right away!

Garret Murphy was the first racer to win some of the posted cash as he grabbed the #1 qualifier money in Vanson Leathers Pro that was posted by MTC. He had an almost perfect .001 light!

Mike Ducharme nabbed the #1 qualifier money that was posted by Worldwide Bearings in the M2 Shocks Street Class with his great .003 reaction time.

Vantine Nitrosports posted the #1 qualifier money in the DME 9Below class and it was taken by Ryan Bonitatis (hope I spelled that right Ryan). He ran a 7.559 e.t. in qualifying, and as luck would have it, although there were several fast bikes on the property, none were able to run faster than that all day, so that time held up as the quickest pas of the day earning Ryan an addition prize of $525 cash that was posted by 15 businesses and individuals. A nice crystal was also awarded by Carlson Heating.

Ashon Dickerson rode his 08 Suzuki hard and turned on win lights in all 6 rounds to claim the first place prize In Vanson Leathers Pro!

In the first two rounds he advanced when his opponents turned on the dreaded red light. Starting in round 3 he was on his game with back to back reaction times in round 3 and 4 of .033 and .032. Round 5 he had a bye and just took the tree and saved the bike for the final. He dialed in a 9.03 for the final where he had a tough opponent. Multi time points champ Don Hookway was dialed in at 9.49. This one ended when Don left the line just .015 too quick! Ashon had a respectable .054 in the other lane, but did not need it. They both ran the bikes through and both ran under their dial ins. Ashon ran 9.003 on his 9.03 and Don ran 9.470 on his 9.49. Nice job all day by both racers!

Louie Supczack had the best reaction time in eliminations with a .010 in round 2.

In M2 Shocks Street, Ron Legault started things off on his 08 Suzuki with a perfect .000 reaction time and a win light when his opponent went red! He continued to turn on win lights including saving his second best reaction time, an .022 for the semifinals where he faced 22 time points champ Bob Carlson. In that round Bob broke out trying to overcome being late at the start sending Ron to the final. For the final Patrick Jones was waiting on his Kawasaki, he had been cutting good lights and knocking off tough competitors as well! Patrick dialed 9.15 to Ron’s 9.10. Patrick was holding a .007 advantage in reaction time, but Ron was able to take a tight win light and prove that there really are two ends to a drag strip by running closer to his dial at 9.121 compared to Patrick’s 9.191.

In DME 9Below both finalists had great reaction times in almost every round. The runner up, John Hastings riding a Suzuki had reaction times in the first round, third round and the final that were all exactly the same at .014! He was a bit late in round two, but survived when the number one qualifier broke out. In the semifinal his opponent was broken and Bob Carlson was scheduled for a bye. Neither made the pass. They both were advanced to the final. Meanwhile on the other side of the ladder. Bob Carlson riding a Kawasaki had advanced with reaction times of .015 in round one, .055 round two, .036 in round three and when he needed it most, he matched John’s .014 in the final with his best of the day, an .011. Now that they were off the line with nearly the same light, it was anybody’s race. It was going to come down to dial in’s and finish line skill. John had dialed 8.99, Bob was in at 8.89.  The win light came in on Bob’s side by just .015! His total package including how far over the dial in he was with the reaction time was .044 from perfect while John was right there with a .059 package! Now that was a tight final!

The Quick ET Bonus earns $100 Vantine Nitro Sport bonus plus a crystal clock, plus money raised from racers giving Burntitus a total of $525.00. OPI also gave $25.00 bonus to the winner. 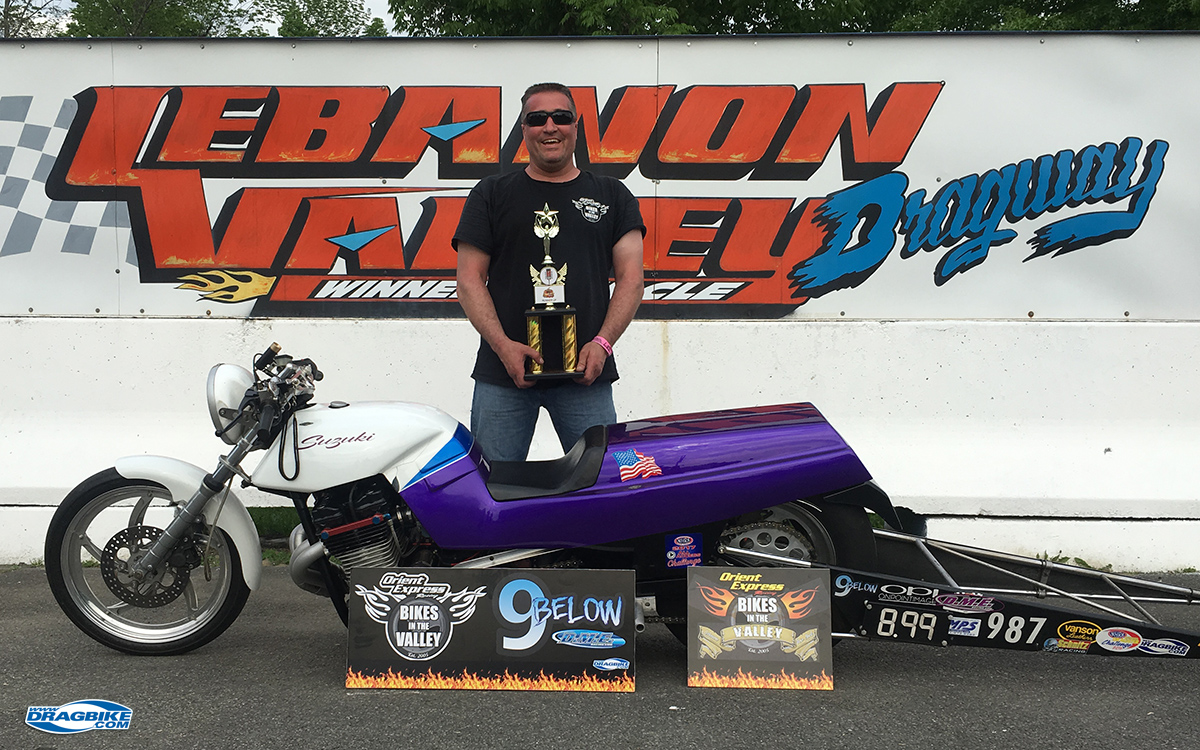 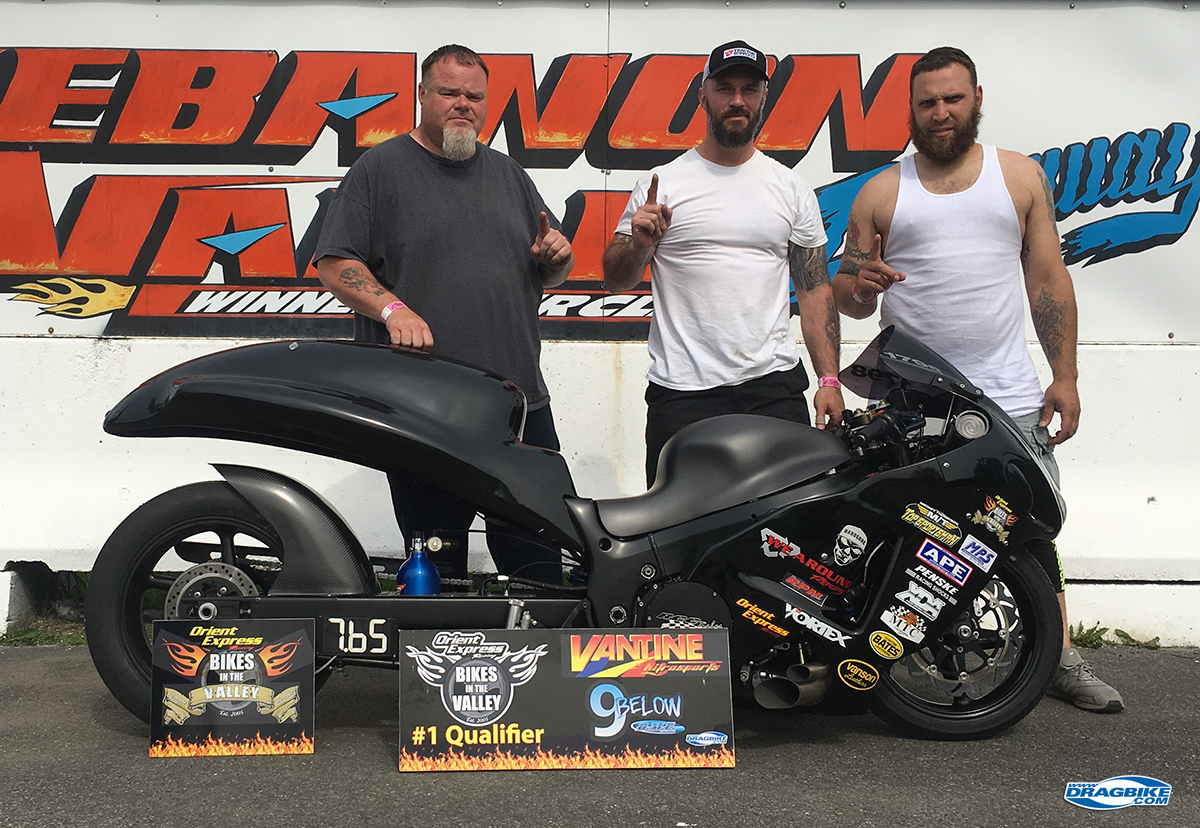 MTC Engineering offered up a $65 Bonus to Garret Murphy for qualifying number one on his Kawasaki ZX-12. Class payout sponsor for this event was MTC Engineering, MPS Racing and Fast by Gast. 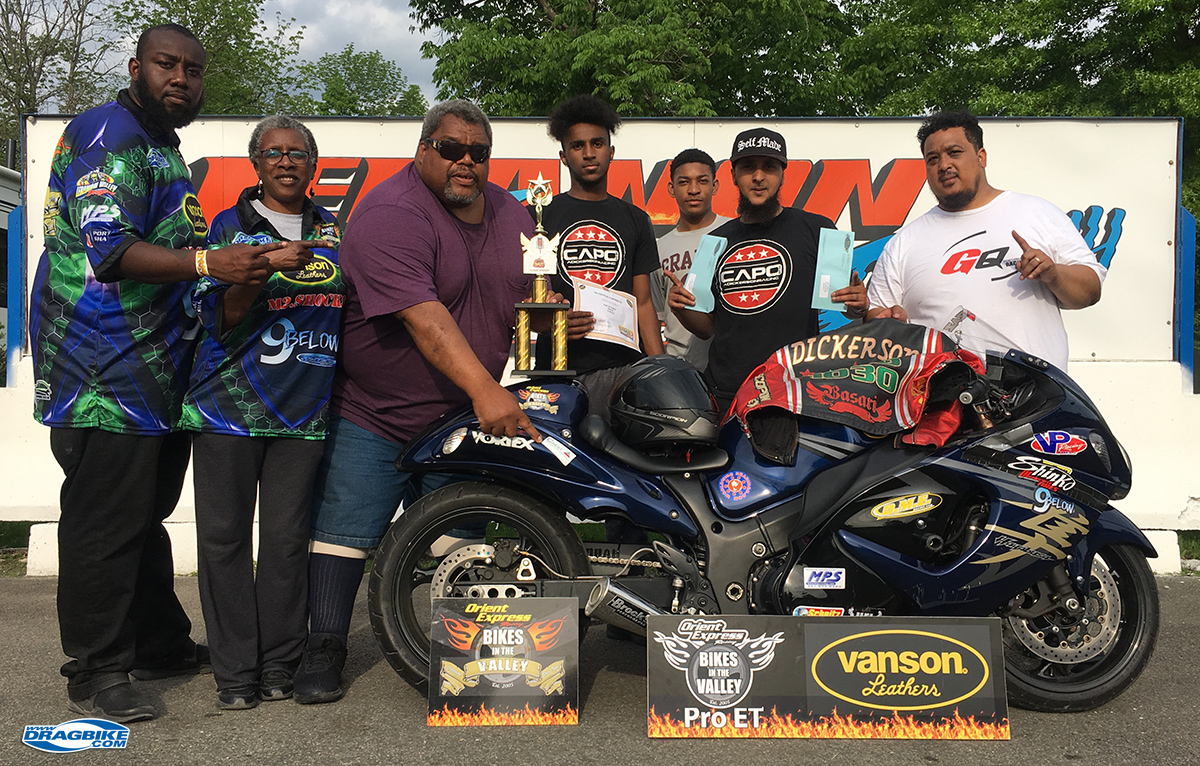 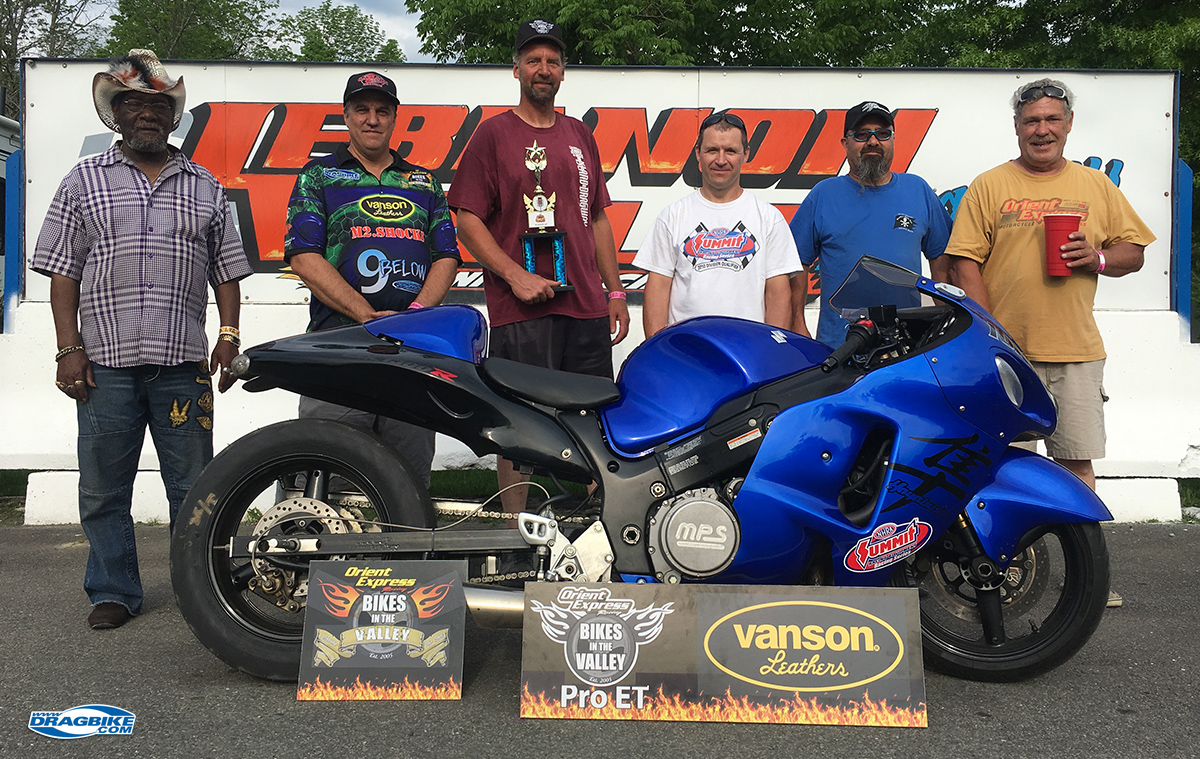 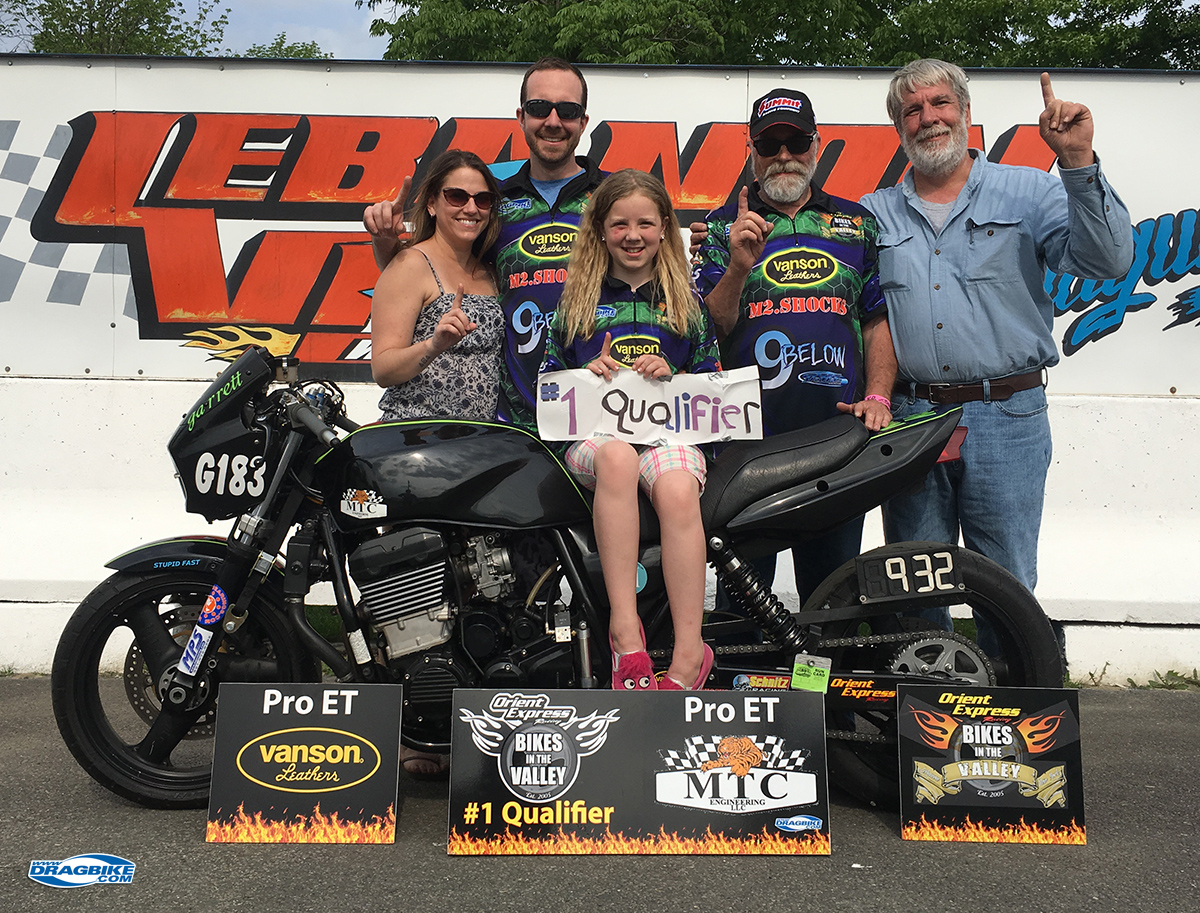 Class payout sponsors for this event was Hardcore Cycles, Standard Cycle, Nerium, Energycoil and Motorsports Nation. Worldwide Bearings offered up a $65 Bonus to Durcharme for qualifying number one on his Suzuki Bandit. 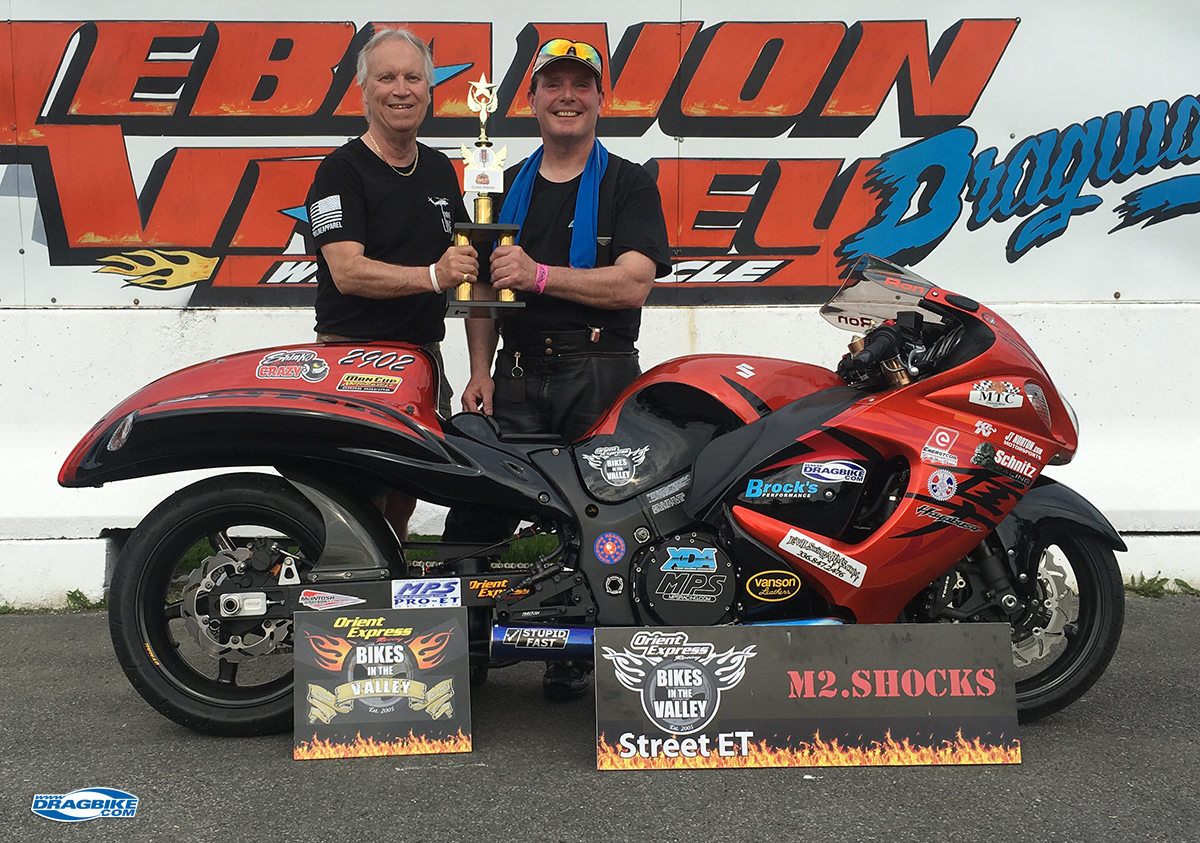 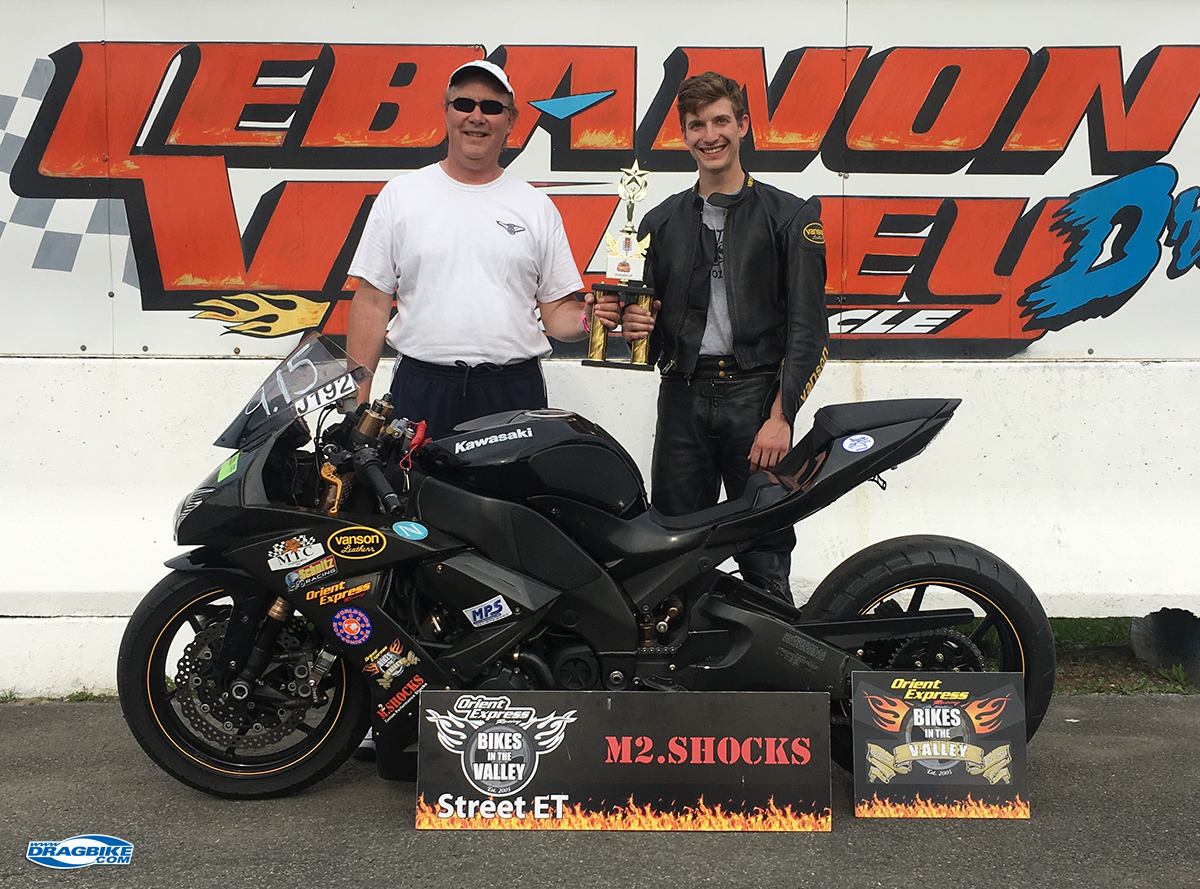 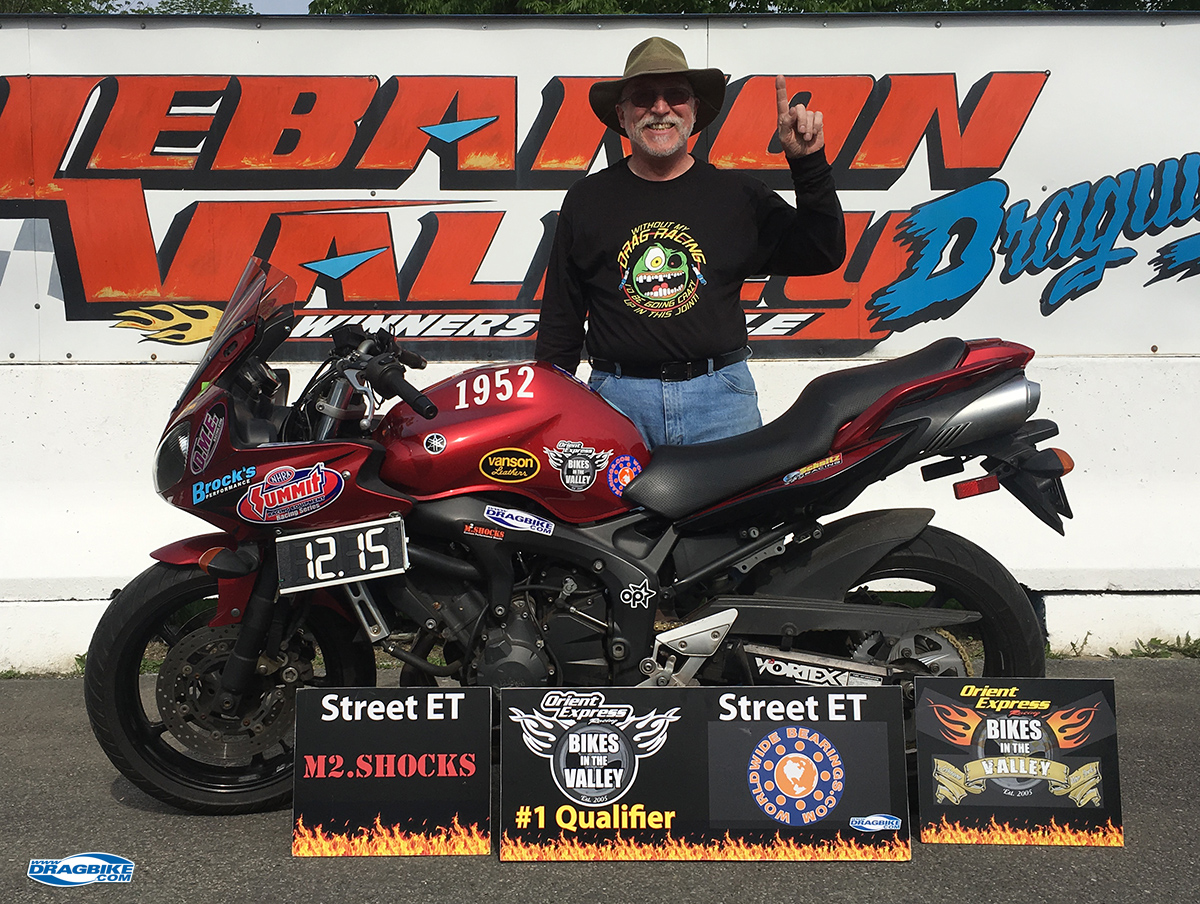 Next Race is June 16th  at New England Dragway sponsored by Breaker Bikes. This event will feature a Friday night test and tune. 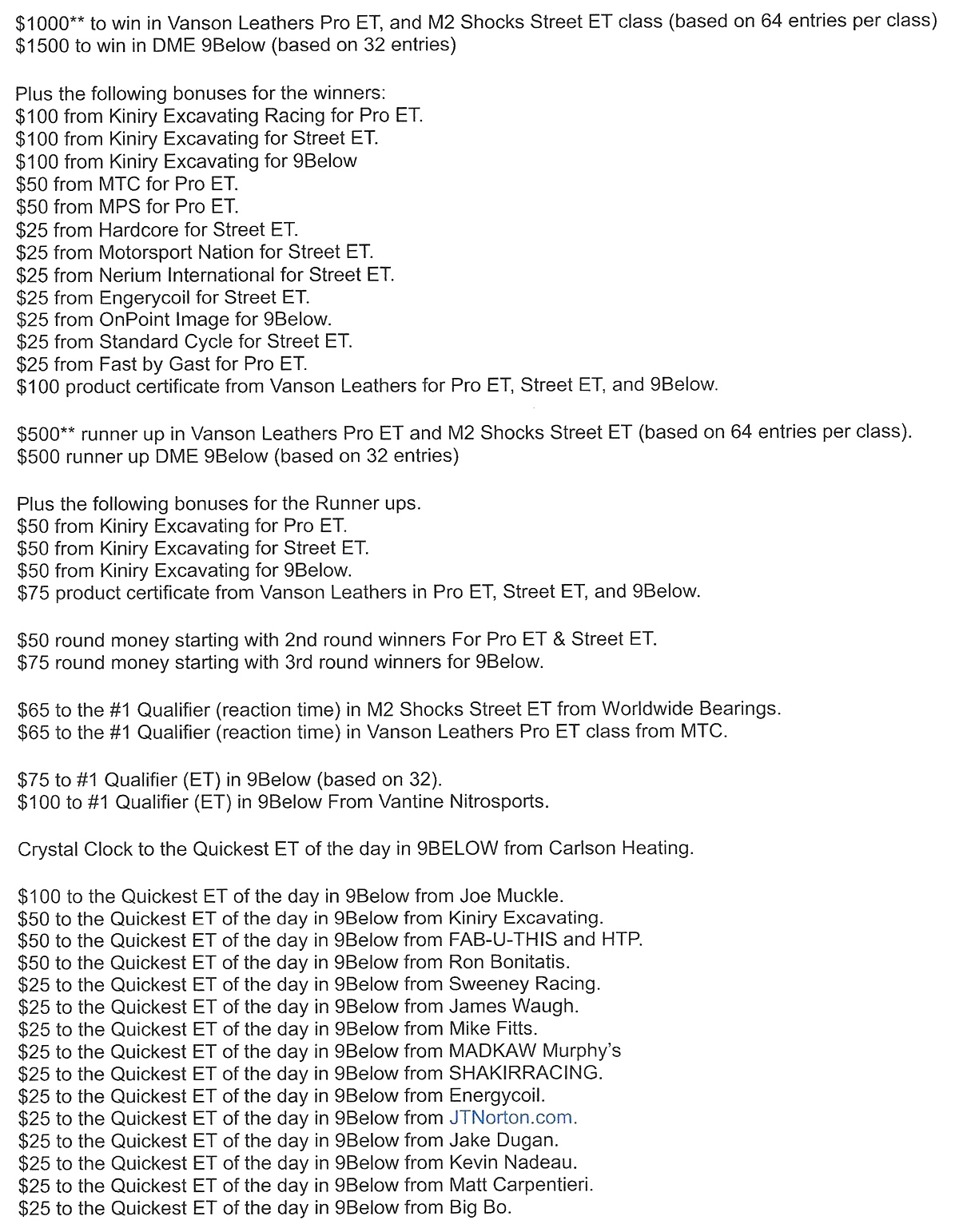