Bikes in the Valley: Results from August Event

The Orient Express “Bikes in the Valley” makes its first visit South to Atco New Jersey event sponsored by Worldwide Bearings. The forecast may have kept some from making the trip, but the rains held off for a Hot and Humid day of racing.

After two round of Qualifying was completed, Kevin Gauntt from Egg Harbor City NJ took the number one Qualifier spot in the M2 Shocks Street ET Class on his Harley-Davidson with a .013 Reaction Time. Gauntt pocketed the $65 Bonus from Worldwide Bearings.

In the Vanson Leathers Pro ET Class, NJ’s Ashon Dickerson took the number one spot with a .005 Reaction time on his Suzuki to take home the $65 Bonus put up by MTC. In the DME 9Below Class, Flying Ryan Bonitatis from Berlin NJ had the field covered and took the number one spot on his 07 Suzuki Busa with a 7.618 ET at 182.65 MPH to pocket $100 from Vantine Nitrosports and $30 from the purse.

The first Finals to go off was the DME 9Below Class. The final matchup was Bob Carlson from Torrington CT on his 12 Kawasaki ZX14R, going up against Philadelphia’s Bart Colon on his Suzuki Busa. Carlson in route to the finals took out Tom Miceli who substituted his ride with a bike that couldn’t make the 8.99 Dial-in, James Culbreath with a huge hole shot, and a tight battle Double Breakout with #2 in Points rider John Hastings. Colon in route to the Finals took down John James who had difficulty running is number, the first Generation Bonitatis Ron on a holeshot, then taking down the 2nd Generations Bonitatis and #1 Qualifier Flying Ryan who ran dead on his 7.65 Dial-in but Gen2 took a snooze on the tree.

In the Finals Carlson took the starting line advantage with a .015 to Colon’s .063 Reaction Time and ran 8.79 rolling out on his 8.77 Dial-in and Colon pushing hard to try to catch Carlson ran 8.708 on his 8.72 Dial-in. Carlson took home the $700 check plus $200 Bonus from Worldwide Bearings, $25 from OnPoint Image, and $100 Product Certificate from Vanson Leathers. Colon took home the $350 check, $50 from Worldwide Bearings, and $75 Product Certificate from Vanson Leathers. 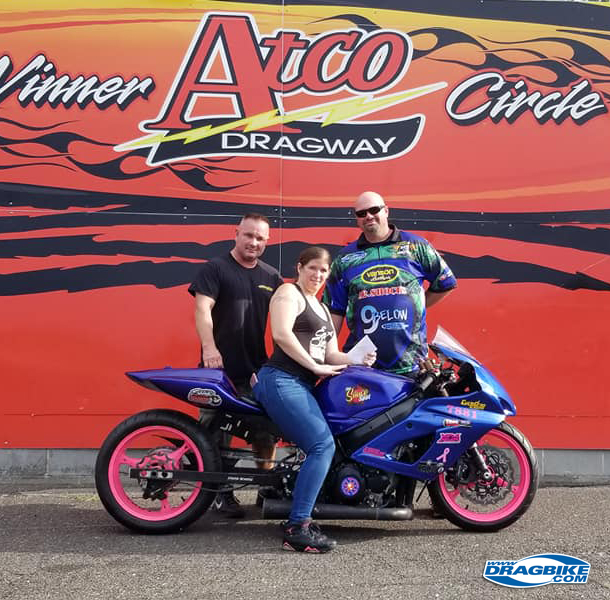 The next Finals to go off was M2 Shocks Street ET Class. The pairing was Bob Carlson again and Edythe Decker from Elizabeth NJ on her 06 Suzuki GSXR 1000. Decker defeated napping Mike Marino with a .017 to Marino’s .112 Reaction Time, Tom Miceli who broke, Stephen JR who broke out, and red lighting Wardell Pinkney. Carlson got to the Finals by beating red lightning Ed Johnson, Lawrence Currie on a double breakout, and the points leader Ashon Dickerson via the red light.

The Finals was over quick, as Decker went Red. Carlson Doubled up for the day and took the check for $550, $200 from Worldwide Bearings, $25 from Hardcore, $25 from Motorsports Nation, $25 from Nerium International, $25 from Engerycoil, $25 from Standard Cycle, and $100 Product Certificate from Vanson Leathers. Decker took the $275 runner-up check, $50 from Worldwide Bearings, and $75 Product Certificate from Vanson Leathers.

Vanson Leathers Pro ET Class was the final class to run off the Finals. This class was just stacked with Heavy Hiitters/track champions from all over the northeast. After the dust settled, the final pair left Oxford Connecticut’s Ron Blake on his 08 Kawasaki ZX14 against Clarksboro New Jersey’s Nicholas Mazeika on a Suzuki Busa Called Ugly.

Blake got to the Finals by running dead on with a 2 and won against Derek Cesari breaking out by .007, beat James Farmer on a holeshot by .04, moving threw Red lighting Stephen JR, put a .001 on Harvey Powell’s snooze, and took down Mike Marino with a .005 as Marino gave up the stripe. Mazeika got to the Finals by winning over red lighting Adam Sheran, Points Leader Don Anderson by a big holeshot, a no-show Ashon Dickerson, James Culbreath who couldn’t run the number, and taken the bye in the semifinals. So going into the Finals could be a Connecticut/Kawasaki ZX14 sweep at Atco, but Mazeika and his huge posse had other thoughts as some side bets were taken. Mazeika dials in with a 8.98 against Blake’s 9.63. Mazeika takes the .05 Reaction Time advantage over Blake, which was too much for Blake to make up. Mazeika ran a rolling off 9.045 to Blake’s 9.673. Mazeika takes home the $600 check, $200 from Worldwide Bearings, $50 from MTC, $50 from MPS, $25 from Fast by Gast, and $100 product certificate from Vanson Leathers. Blake takes home the $300 runner-up check, $50 from Worldwide Bearings, and $75 Product Certificate from Vanson Leathers.

Thank you, Dave Roberts and Timmi, for running this event, and Atco Dragway and staff for there hard work. Looking forward to returning next year.

The next Orient Express “Bikes in the Valley” Race will be on September 8th at Lebanon Valley Dragway in NY sponsored by Kiniry Excavating. 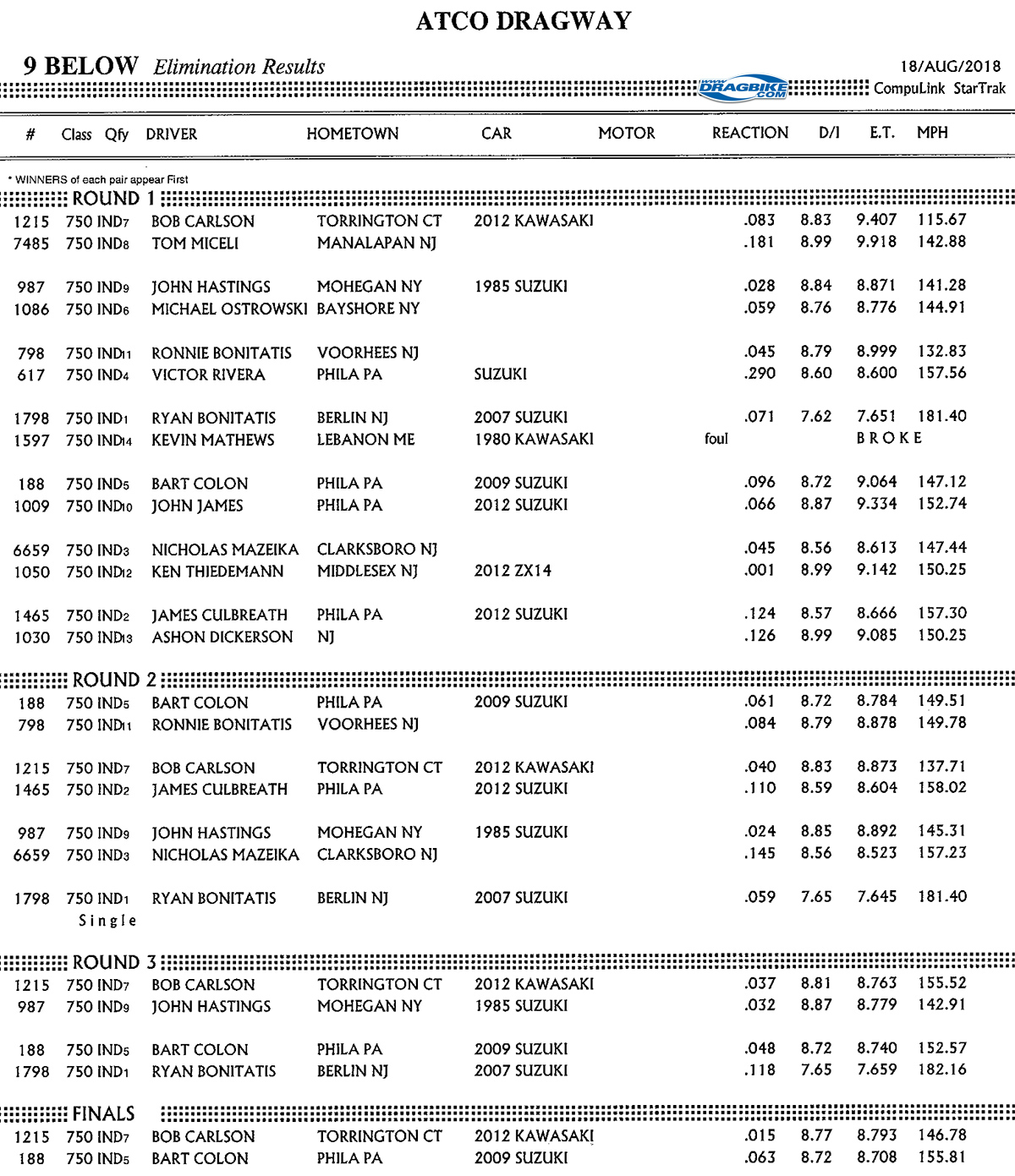 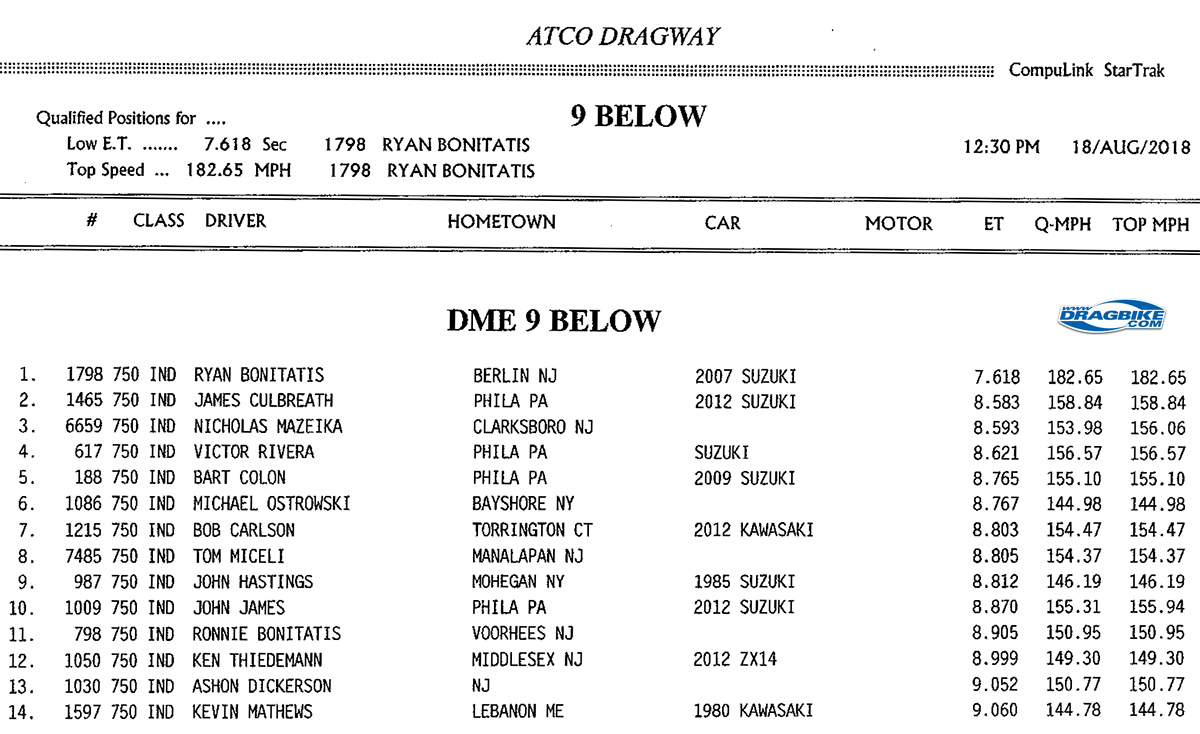 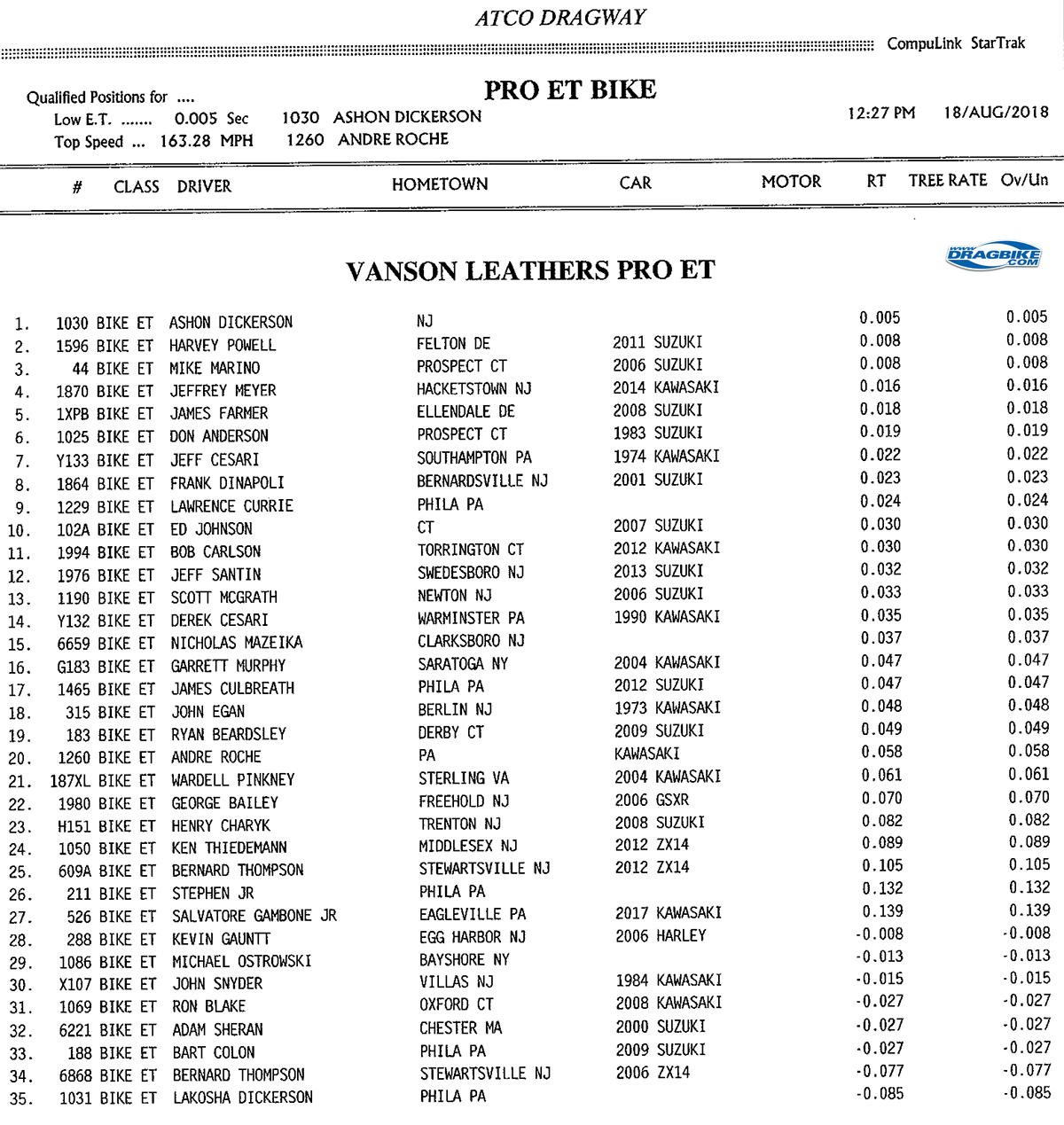 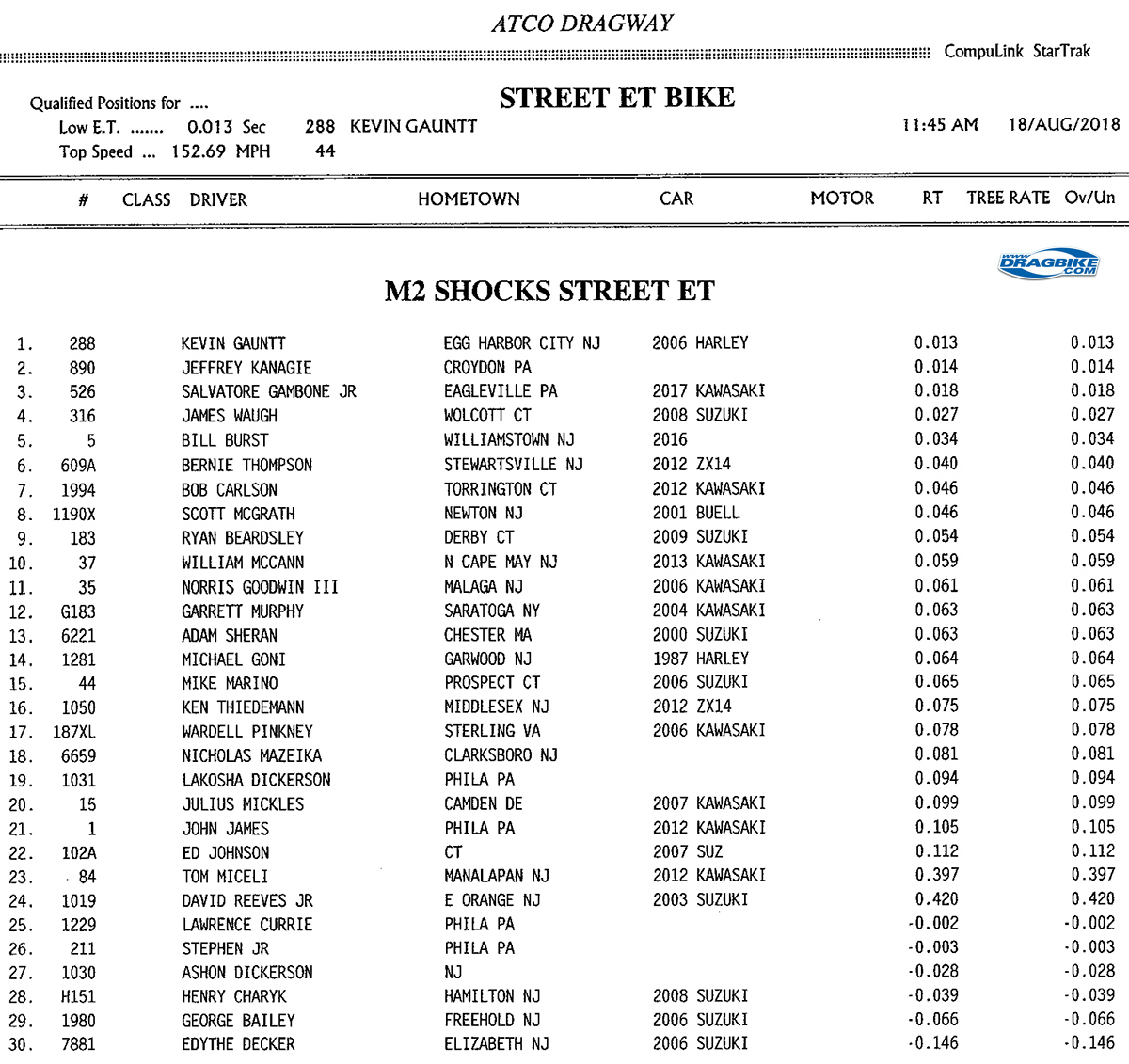