Andy Sills of Hunter Sills Racing piloted a San Diego BMW Motorcycles-built BMW S 1000 RR during its debut appearance to an average speed of 224.190 miles per hour across the timed mile on the Bonneville Salt Flats in Wendover, Utah on Friday, August 16, 2013, at the famed SCTA Speedweek. The achievement made this S1000RR the world’s fastest BMW motorcycle.

San Diego BMW Motorcycles teamed up with Shane Kinderis, owner of Alpine Performance in Australia, and crew chief for the Australian Superbike team Next Gen Motorsports, to tune the engine to 220 horsepower while still conforming to SCTA 1000 cc requirements. The bike also employed a new style fairing design created by Mike Verdugo of Catalyst Composites in Escondido, CA. 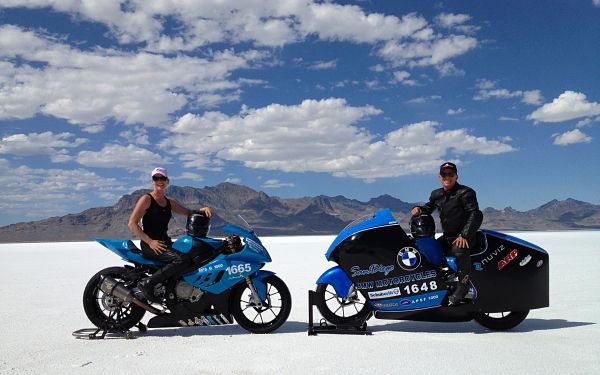 Hunter Sills Racing was chosen to pilot the bike, as their riders Erin Hunter and Andy Sills are avid high speed riders with a combined 21 years of Landspeed Racing competition. Together, Hunter and Sills have achieved 20 world and national landspeed records on a wide variety of motorcycles, ranging from a custom-built 50 cc streamliner to the 215 horsepower, over 220 miles-per-hour fully faired BMW S 1000 RR.
“We are coming to Laguna Seca to race the World Superbike event in a month, so the engine development was good for us,” stated Shane Kinderis.  “This was a good proving ground for R & D for the World Superbike program and to test the technology we’ve been developing.” 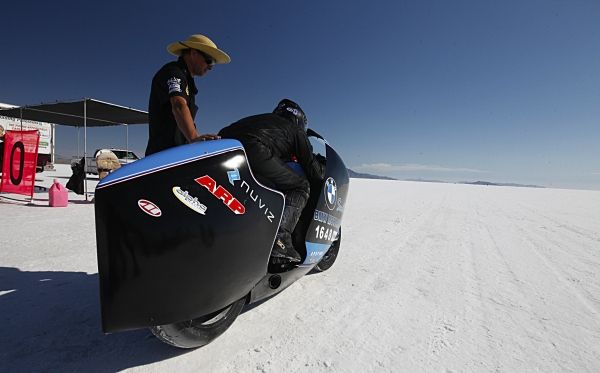 “This was our first opportunity to test the Alpine Performance tuned motor and new Catalyst fairing design for the S 1000 RR, and were delighted by the results,” observed Gary Orr, owner of San Diego BMW Motorcycles.  “We worked with both companies while roadracing the S 1000 RR and we knew we could work together to make the S 1000 RR fast….really fast. Our senior race technician, Curtice Thom, worked alongside Shane Kinderis assembling, testing and tuning the engine to bring out the best performance in this bike. After just nine passes on the unusually difficult Bonneville salt course, we set a new SCTA record and Andy earned a spot in the coveted 200 mile per hour Club. We owe a great amount of the success of this project and thanks for the help we received from our technical partners: ARP (Automotive Racing Products) Fasteners were used exclusively in this engine to ensure it stayed together under the incredible stresses. Maxima Oils: The Maxima 530RR was our insurance policy against excessive friction and heat. The full line of Maxima products were used to protect the bike from one of the harshest environments on the planet. Catalyst Composites, maker of all kinds of motorcycle racing bodywork. Alpha Racing, providers of high performance specialized engine parts. Sprint Filter, suppliers of the world’s finest air filters.”

The team will be racing this bike again, along with a more traditionally faired BMW S 1000 RR, at the International Motorcycle Speed Trials by BUB, August 24– 29, 2013 held at Bonneville Salt Flats. Their goals are to bring home two international FIM records and multiple national AMA records for the San Diego BMW Motorcycles and Hunter Sills team.

In addition to their multiple world and national landspeed records, Andy Sills and Erin Hunter also hold two Guinness World Records and in 2011 became the only pair ever to race “two-up” at a sanctioned landspeed racing event, taking a production BMW to a two-way average of 183 mph and alternating as pilot and pillion for the required two attempts. Erin Hunter and Andy Sills can be followed on Facebook (https://www.facebook.com/HunterSillsRacing.)

BMW of North America, LLC has been present in the United States since 1975.  Rolls-Royce Motor Cars NA, LLC began distributing vehicles in 2003.  The BMW Group in the United States has grown to include marketing, sales, and financial service organizations for the BMW brand of motor vehicles, including motorcycles, the MINI brand, and the Rolls-Royce brand of Motor Cars; DesignworksUSA, a strategic design consultancy in California; a technology office in Silicon Valley and various other operations throughout the country.  BMW Manufacturing Co., LLC in South Carolina is part of BMW Group’s global manufacturing network and is the exclusive manufacturing plant for all X5 and X3 Sports Activity Vehicles and X6 Sports Activity Coupes.  The BMW Group sales organization is represented in the U.S. through networks of 338 BMW passenger car and BMW Sports Activity Vehicle centers, 139 BMW motorcycle retailers, 119 MINI passenger car dealers, and 34 Rolls-Royce Motor Car dealers.  BMW (US) Holding Corp., the BMW Group’s sales headquarters for North America, is located in Woodcliff Lake, New Jersey.