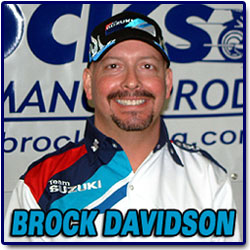 2000 AMA/Prostar Superbike champion Brock Davidson has secured a deal with American Suzuki Corporation to provide his team official support in 2004.   Davidson, who was the first man to take a street bike into the seven second-zone, took a short hiatus from competition to concentrate on his business, but is more than ready to return.

“I’ve got the itch again,” Davidson said.  “And with Suzuki’s return to our program this should be one of the best seasons ever.”

“Dustin has been around the Prostar street bike scene for a few years now,” Davidson said.  “The kid has gone fast on anything I have ever sat him on, I’m confident he’ll do a good job for us. He gained invaluable knowledge beating some of the best street racers in the country during Street Chaos match races in 2002; it will be interesting to see how he fairs in a full season of national competition.” 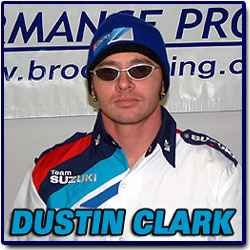 Along with fielding a racing operation, the Suzuki-backed team will offer motorcycle drag racers a revolutionary service by following Suzuki’s lead in other forms of motorcycle racing and vending ‘Racer Discounted Genuine Suzuki Parts’ at each of the races. “Our relationship with American Suzuki has continued since my break, in fact it has strengthened. Pat Alexander and Morgan Broadhead, in the Sports Promotion Department, have been looking towards the future and recognize this opportunity to demonstrate Suzuki’s support and appreciation of their racing customers. We represent an entire new wave of sport bike drag racers,” Davidson said.  “We’ll be bringing all of the stock components that a Suzuki racer might need during a weekend. I have always wished someone would have these parts available at the track. This program should work out well for all of the Suzuki racers entered in the event.”

“It’s a pleasure to have Öhlins onboard. They are one of the reasons I was the first to get my street bike in the sevens,” said Davidson.  “They actually have shock and chassis dyno’s that we use to fine tune the suspensions for street/drag racing. The knowledge we gain on the track will directly impact the design of custom Öhlins suspension components to be sold exclusively by Brock’s Performance.”

The team will follow the entire eight-race AMA/Prostar circuit along with selected MIROCK races.

“Prostar will be our main focus, but we will take the entire operation to MIROCK when we can,” Davidson said.  “My Bandit isn’t completely retired yet, and it’s still set up for 60-Inch in addition to several new Hayabusa’s.”

The team is busy at work in its Ohio headquarters putting the finishing touches on the GSXR’s that will compete in the Super Sport categories.   Eventually Davidson plans to return to his true passion by assembling another Street Bike Shoot Out entry.

“It’s going to take some R-and-D, but we want to build a nitrous assisted Hayabusa that can run with all of those turbos.  We don’t need any hairdryers around here,” laughed Davidson.