After finding the right combination
on a Pro-Mod bike that leads to some of the best times yet on a bike and the
team’s first win of the season, most teams would lock down the winning
combination and head off to the next race. But not Team Fish. The team took
a little drive up north and took delivery of their new state-of-the art Koenig
Pro-Mod Chassis. 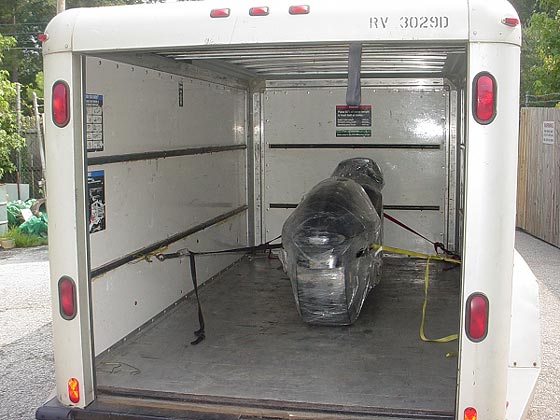 Carefully packed to make the trip back to Columbia, SC.


Up till now, the team has been running their Pro-Mod Hayabusa engine in a top
Gas Chassis with a smaller rear tire ever since they began racing in Pro-Mod.
This makes their 6.83 record setting E.T. even more amazing thanks to the wrenching
of Rob Bush, the bike owner, and some outstanding riding by the infamous “Frank
Williams.”

Within hours of arriving back at the shop in Columbia, SC, they began unpacking
the new chassis and taking inventory of some fine looking pieces. 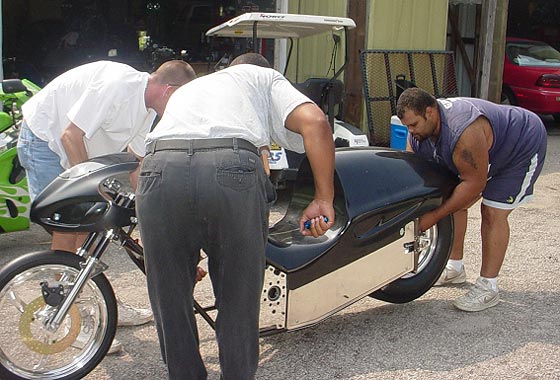 Wow that thing has a big hump. 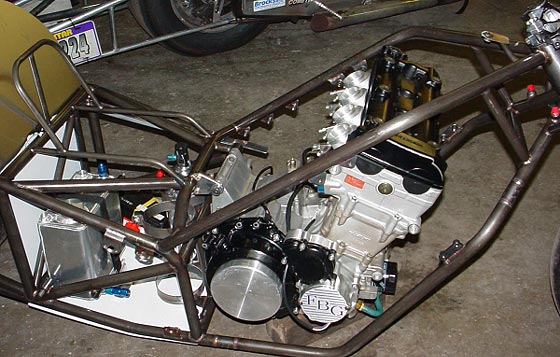 The new engine is further forward and ready to run.

The body is being painted at Fish’s paint
booth and the bike should be ready for its debut at Indy. We’ll follow
up with completed pictures and are planning to spend a little more time in the
winner’s circle during the last half of the season. If the blue marble
paint scheme on the first chassis was any indication, the bike won’t be
hard to spot. It will be shiny, multicolored and ahead of the competition.

After receiving their new Koenig
Pro-Mod Chassis, the challenge for Team Fish Racing was to take the best of
the combinations from Big Blue, the Koenig Top Gas chassis that made the record
setting 6.83 second run, and put together a combination that would take advantage
of the bigger rear tire and weight balance on the new chassis.

Here’s their recipe for
success:

Mix together with custom assembly and tuning by Rob Bush.
Cook at 200 M.P.H. 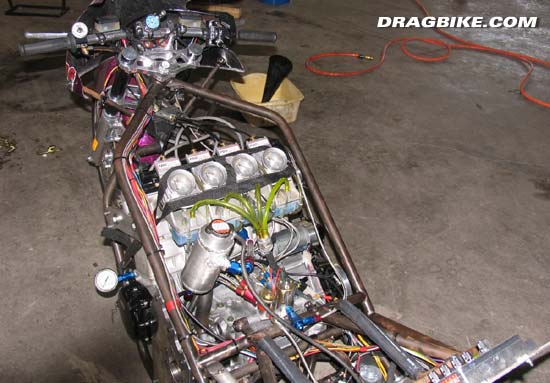 Air, fuel, and nitrous in: horsepower out! 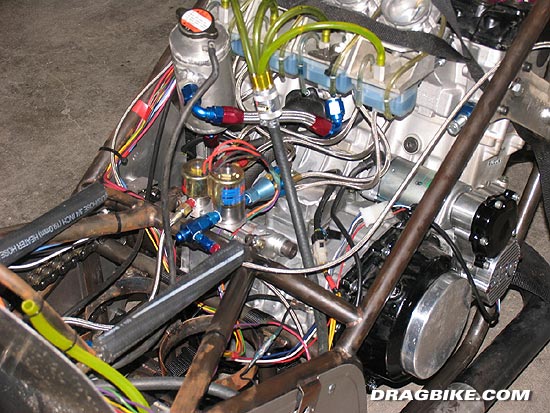 All a motor needs is plenty of ignition and fuel 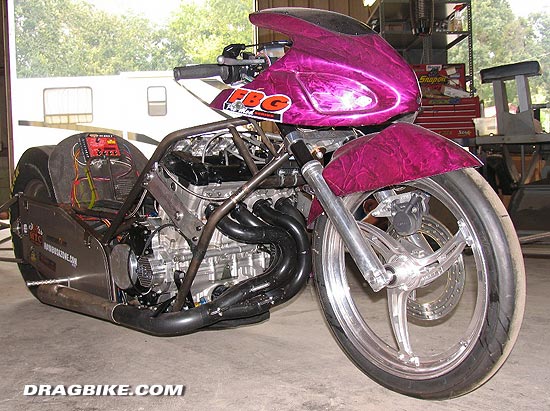 The new paint job minus the body

It just needs is a little more decal space. 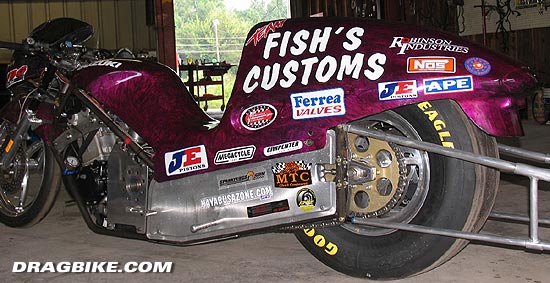 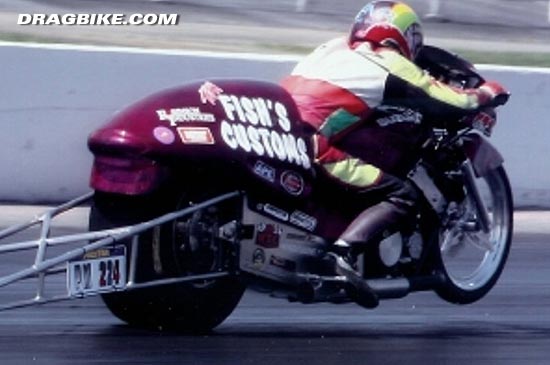 The view from the competition

The bike made a shakedown run at Indy. The clutch cover was blown off and the
decision was made to park the bike for further testing to sort out the typical
new bike gremlins so the team would have a respectable race debut. The team
went to Rockingham on September 2nd for testing. In only the bike’s second
pass down a track including a soft setup for marginal track conditions on an
un-prepped track, the bike posted a 6.99 at 185 M.P.H. Some minor adjustments
were made to the wheelie bars for a better launch, and with track conditions
still less than optimal, a second soft pass was made at 6.93 at 186 M.P.H. Rob’s
comment was simply, “This Koenig chassis is going to haul the mail!”

The new Team Fish Pro-Mod Hayabusa
“Mrs. Robinson” will be seen along with Old Blue at the following
events for the remainder of the season:

The current plans are to have the
infamous “Frank Williams” aboard Mrs. Robinson with Rob Bush piloting
Old Blue. The team has a simple plan for the rest of the year:

Qualify 1-2 followed by a Win and Runner-up.