Home Columns BUILT TO WIN : The Ladies Do It Too - The Young...

BUILT TO WIN : The Ladies Do It Too – The Young Guns

BUILT TO WIN: The Ladies Do It Too – The Young Guns

In a male dominated industry, we can basically count the number of female racers on almost one hand these days. This month we decided to feature a few of the ladies in the racing industry that many people may not know. We decided to reach to out to Texas and back as far as to The Netherlands in order to get a perspective of what it’s like for female drag racers. We basically put together a set of questions and asked each of these ladies the same thing. 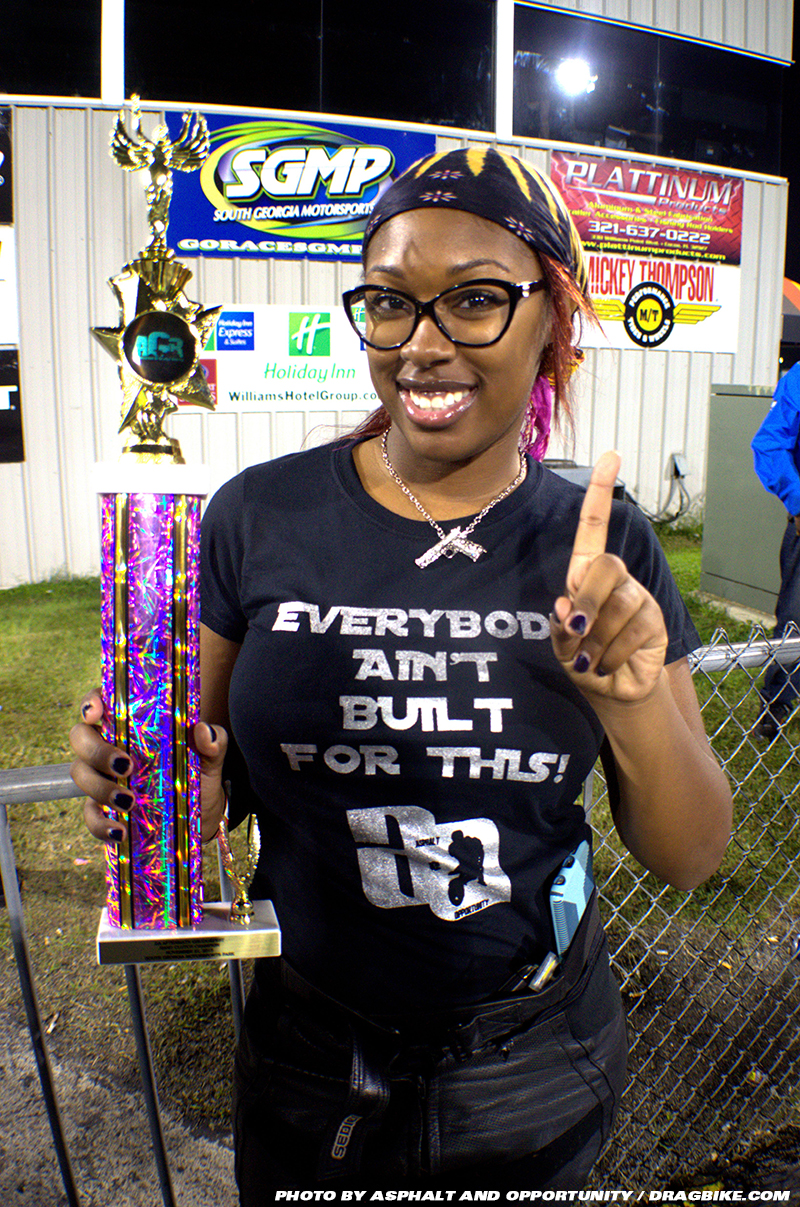 I have been on the racing scene for 6 and half years. My dad races motorcycle as well. After traveling and being by his side for the majority of my youth, I wanted to race. I used to tell my Dad, “I want to be a drag racer, a fast female drag racer.” At age 16, he built my first drag bike, a 1989 GSXR 1100. I raced my 1100, Miss Hello Kitty, for about 3 years and after mastering her it was time for more power. 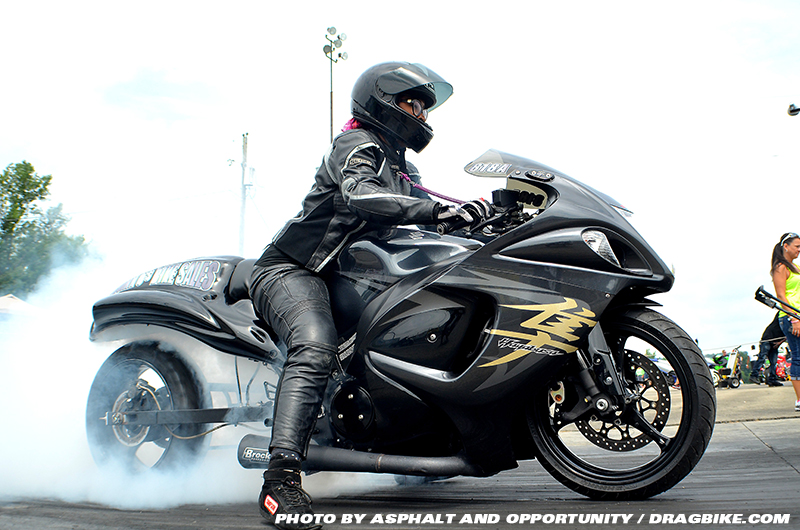 Q. It makes it easy when you have the right people in your corner and you have a good supporting cast around you. Tell us about your sponsors and the recreation of your bike for the 2016 racing season?

I have an amazing support system. Each of my sponsors play an important role in my racing career. Quinn Orand, Larry Phillips and Lee Tomlinson are my sponsors. Quinn Orand and Lee Tomlinson are the masterminds behind the bike. Larry has supplied me with a HARDCORE swing arm, chain guard and fender hugger. This year we decided to beautify MIDNITE (bikes name). I powder coated my GSXR 1000 wheels pink and added pink stickers. We added a led headlight and tail light this season and also upgraded to a HARDCORE swing arm and fender hugger. In addition to what’s on the bike, full stock motor, true hand clutch, aluminum sub frame, lithium battery, EK DRZ2 chain to name a few. 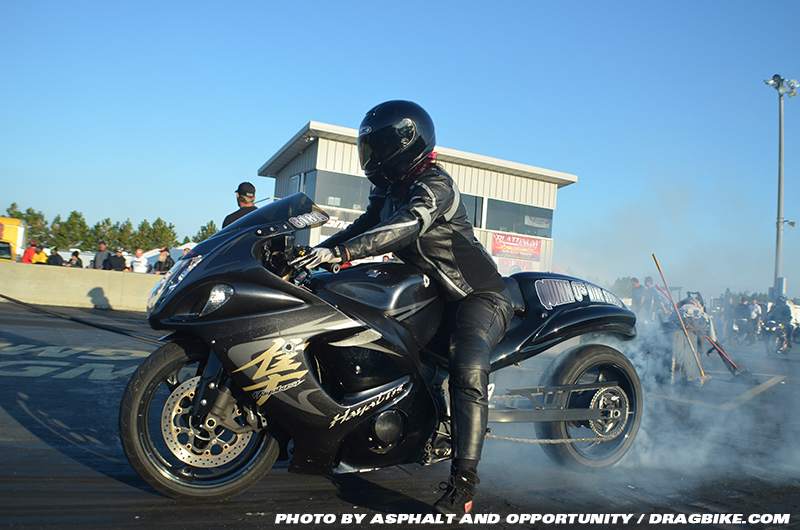 Q. I tell everyone that there aren’t enough ladies in the racing game… It’s almost at the point where you can count them with one hand. Not everyone can make that transition from riding in the street or in a bike club to taking it to the track. Explain your passion and describe what keeps you racing? Do you have anyone that you look up to?

I have always had a passion for motorcycles. I grew up around them. I have been traveling with my dad and watching him race his Promod for over 17 years. I picked up a lot from him and others while supporting him. When I was a little girl my dad and I used to practice on my launch. He would line me up on my Honda 50cc dirt bike. 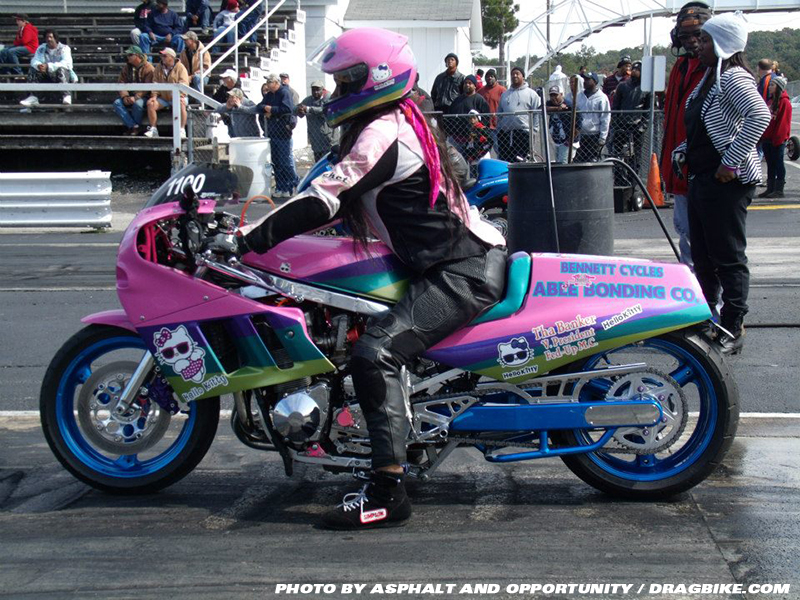 I would get into position and wait until he dropped his towel to take off. I would keep making him practice with me until the sunset. That was at age 4. I am now 22 and still have that same drive as when I was a little girl. What keeps me racing? The legacy of my dad, Pinkey Bowers and my boyfriend, Jimmy Petway. Also, racing is very dear to my heart, and I love the adrenaline and my fans keep me motivated. 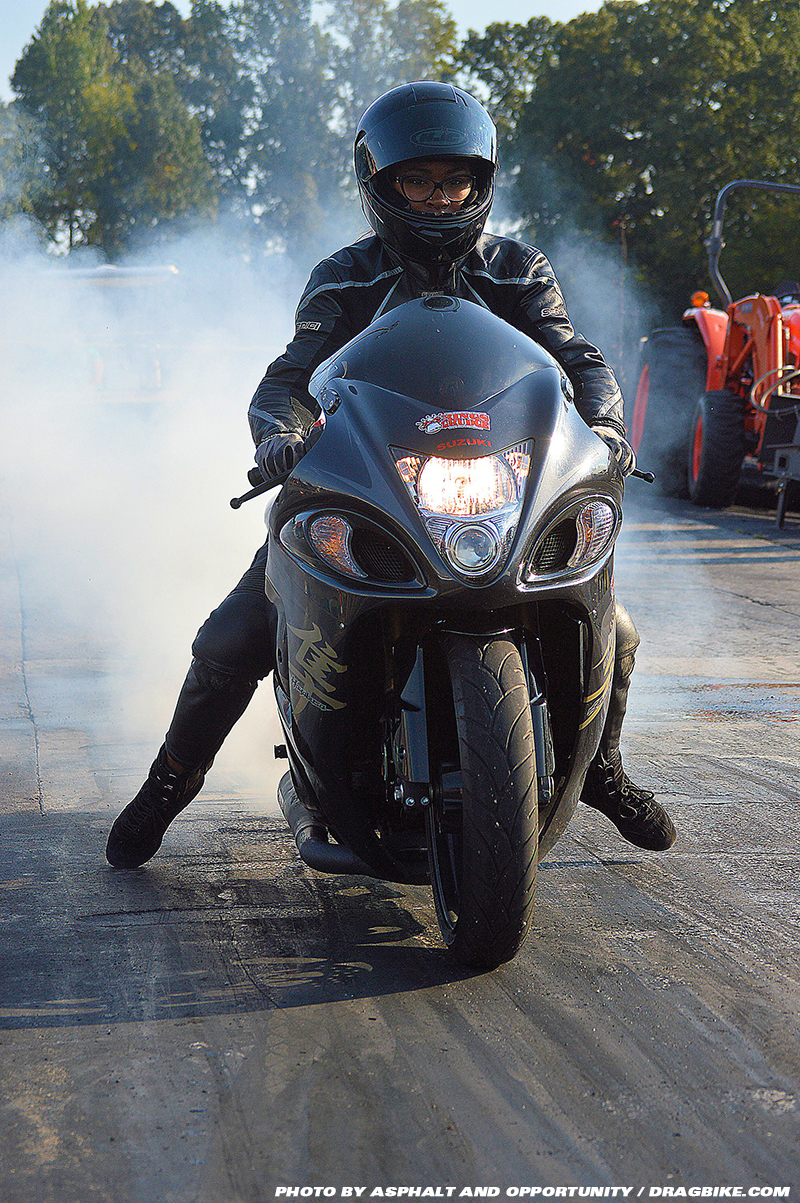 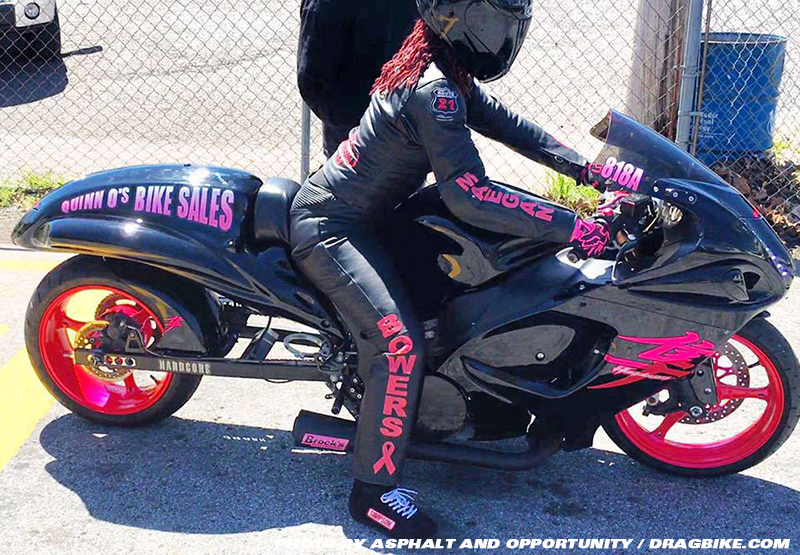 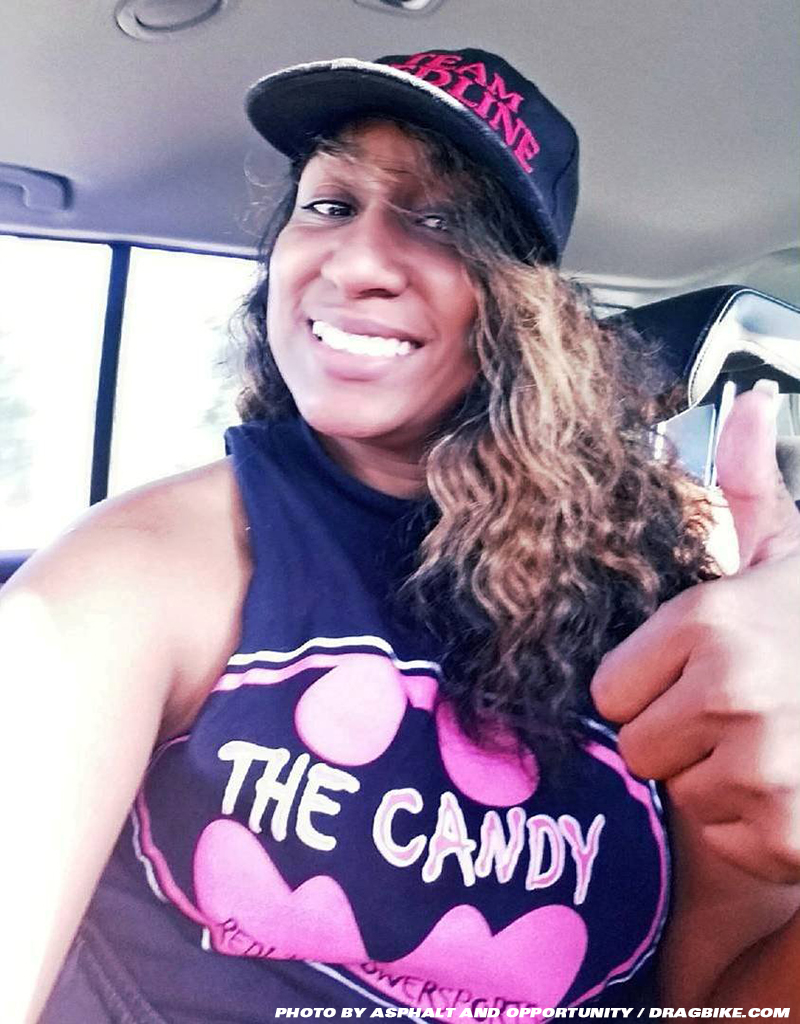 I’ve been a part of the racing scene in Houston since 2007. Before I even began riding, the thing to do on Sundays around here was to ride out to watch the bikers street race and gamble once the sun went down. After I bought my first bike in 2002 and several years of standing on the sidelines watching, I finally got out there one Sunday afternoon and lined up for my 1st street race and won!! 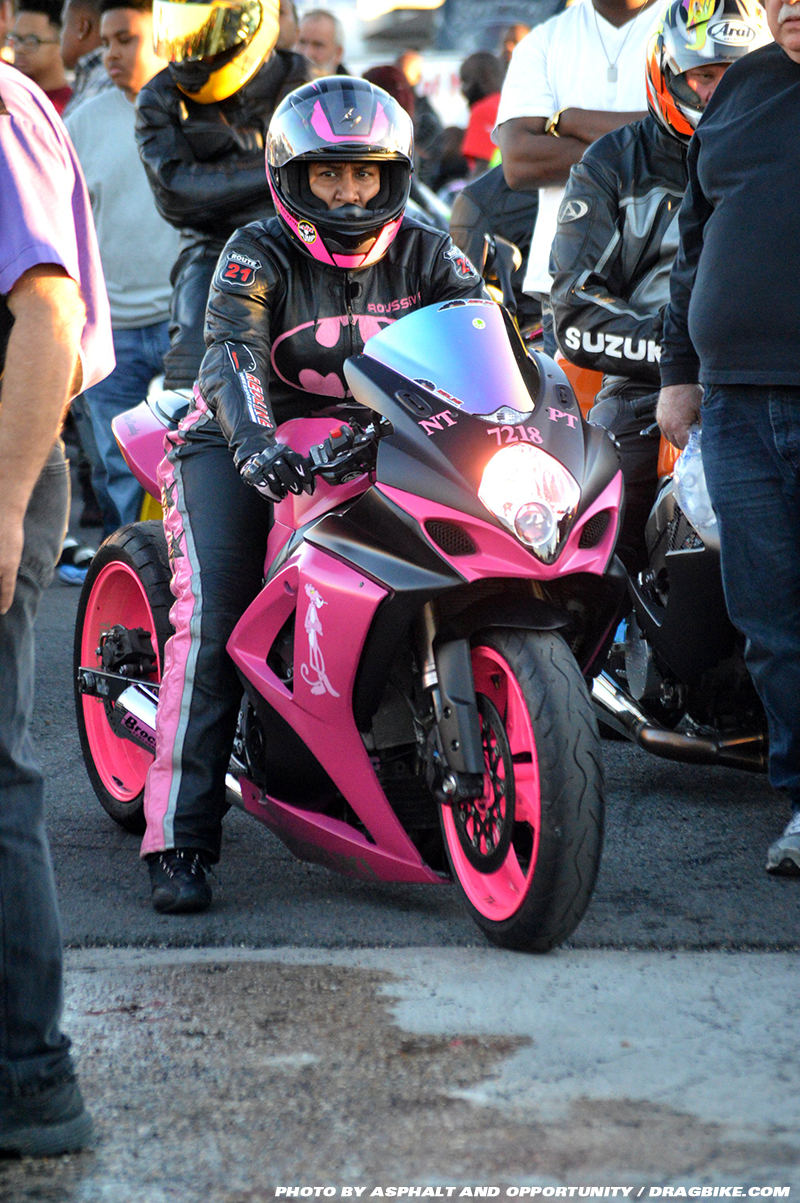 Q. It makes it easy when you have the right people in your corner and you have a good supporting cast around you. Tell us about your sponsors and the recreation of your bike for the 2016 racing season?

As a lady rider, support is everything!!! After all this is still a male dominated sport, so sometimes it is easy for the fellas to not take you seriously as a rider or doubt what you actually bring to the racing community table unless you have a few brothers/sisters standing WITH you for support. For the past 2 race seasons, a Houston motorcycle repair shop, Redline Powersports, has been my sole sponsor and support team! The owner Jamalle Brown and Team Redline, which consists of several fellow racers including Jamalle and Paul Bob, undoubtedly the most respected racers around, and 2 of the very fellas I would stand on the sidelines at the street races back in the day to cheer on, took me under their wing and showed me the labyrinths of racing sole proprietorship. Under their tutelage and the mechanical efforts of Jamalle, I have done a lot with a little. I have learned, that in racing, it costs to go faster!!! I am a “1 girl show”, so the racing buck stops with me and only me, therefore I am currently in the need for sponsorship to further my program. There are a few adjustments that need to be made to the bike to make me a bit more competitive in the grudge racing field, and the costs to travel out of town have been pretty substantial as the number of races per year grows. 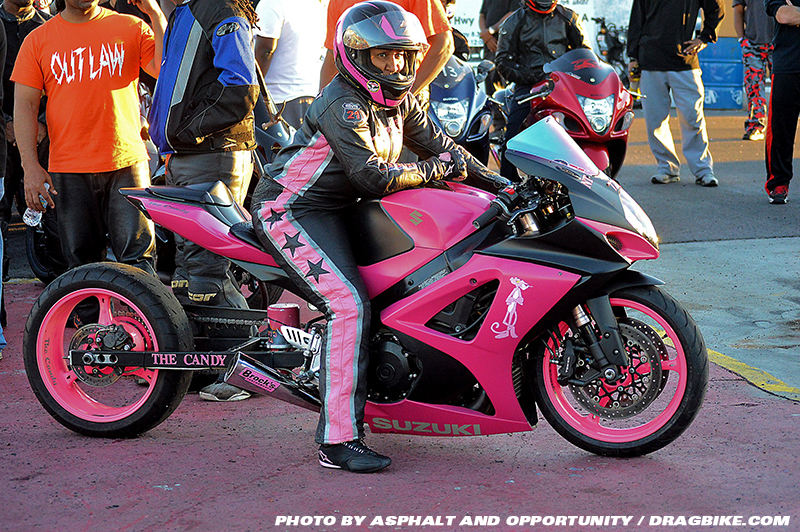 Q. Not everyone can make that transition from riding in the street or in a bike club to taking it to the track. Explain your passion and describe what keeps you racing? Do you have anyone that you look up to?

I do feel that a lack of support (financial and emotional), career, and family needs tend to be the most obvious reasons for the departure of most women from the sport though not the only reasons. I personally bought a bike because I was an enthusiast who wanted to test the limit of my fears and the limits of the machine. I actually never rode a motorbike of any kind, until I purchased my own in 2002. I tried road racing, became a member of the Ruff Ryders bike division, and ultimately moved from street racing to drag racing. 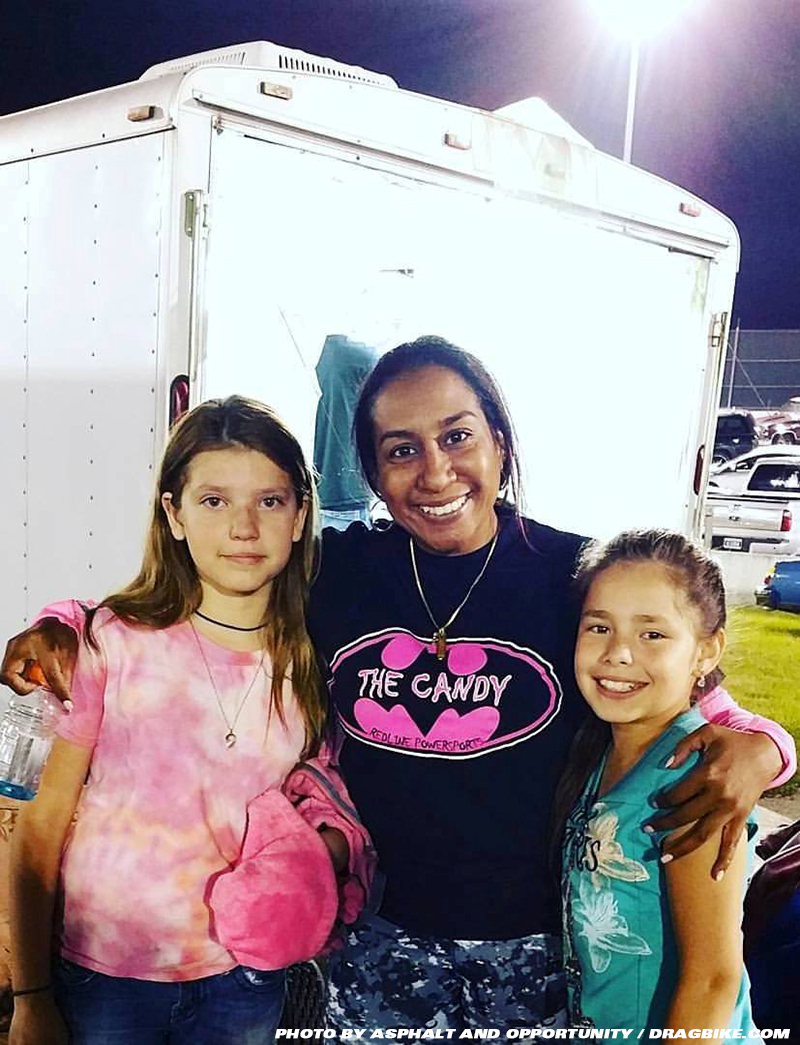 I have fully enjoyed being a part of all aspects of the MC community, but for me what drives my passion for continuing, is doing something most people cannot do, and using that to inspire others to reach for more in their own endeavors whatever they may be. I look up to all the fellas on Team Redline for affirmation that I’m measuring up out there at every race day we attend. It goes without saying though as a racer, NHRA Pro Stock Motorcyclist Peggy Llewellyn is the racer I truly look up to. She encompasses all of the qualities that are the essence of strong women: intelligent, classy, humble, persistent, strong, and beautiful without effort. The fact that she rocks on two wheels is an ultimate bonus!! 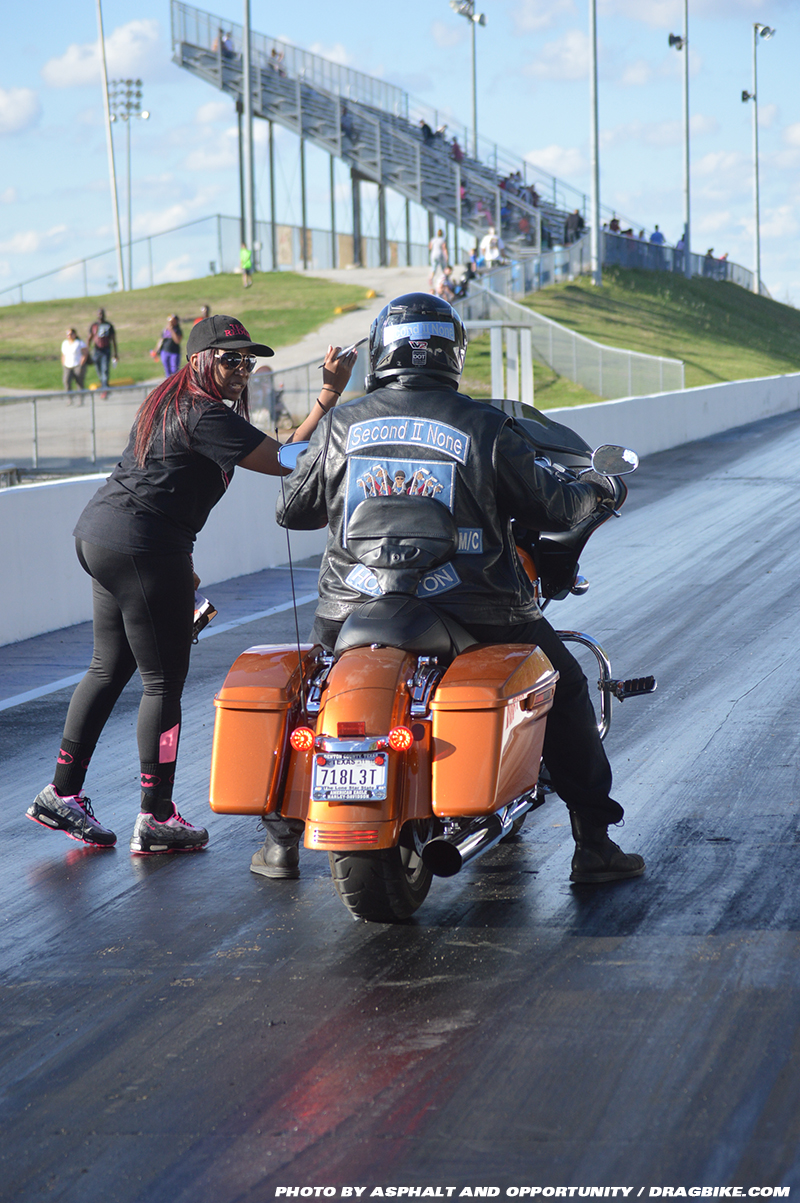 This race season I have been concentrating efforts on just being more consistent on the track, so every opportunity that arises for me to race, I’m there!!! When I make it to the track, you can always find me dancing/walking through the staging lanes and in the stands looking for opportunities to get to meet and put a smile on the face of our young race fans!! It is definitely my intention to attend PTQP this year!!! For me, there would be no greater honor than lining up with other fast ladies from across the country for a great cause. 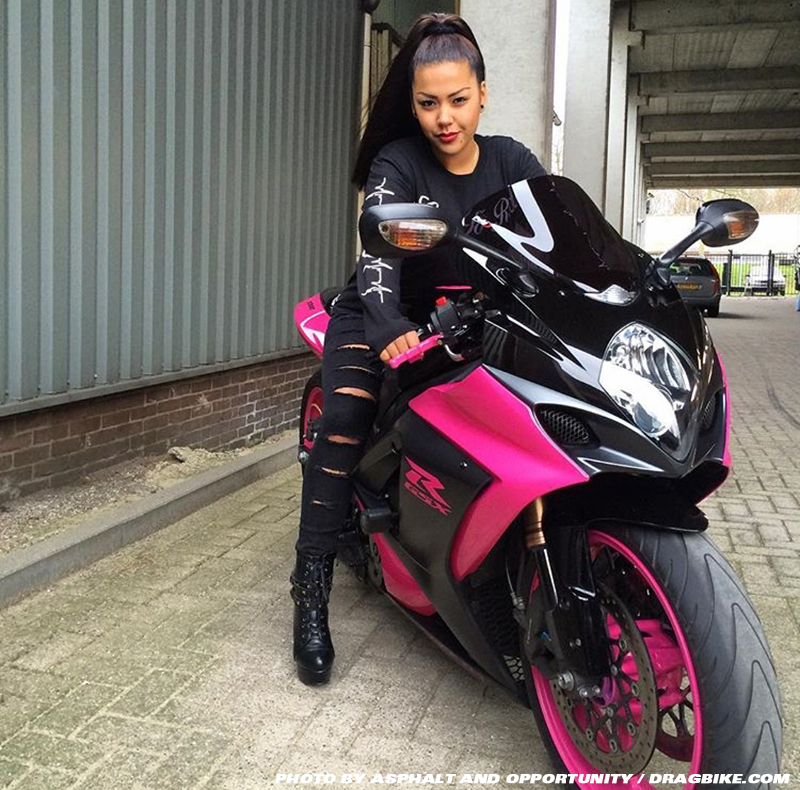 I started racing last year 2015.. I’ve always wanted to drag race, but I didn’t have the right bike for it.. Last year I created my dream bike with the help of my boyfriend. Here in the Netherlands there are only 5/6 drag racing events each year so it is very hard to practice a lot, but it’s my passion.. A love.. An incredible feeling! 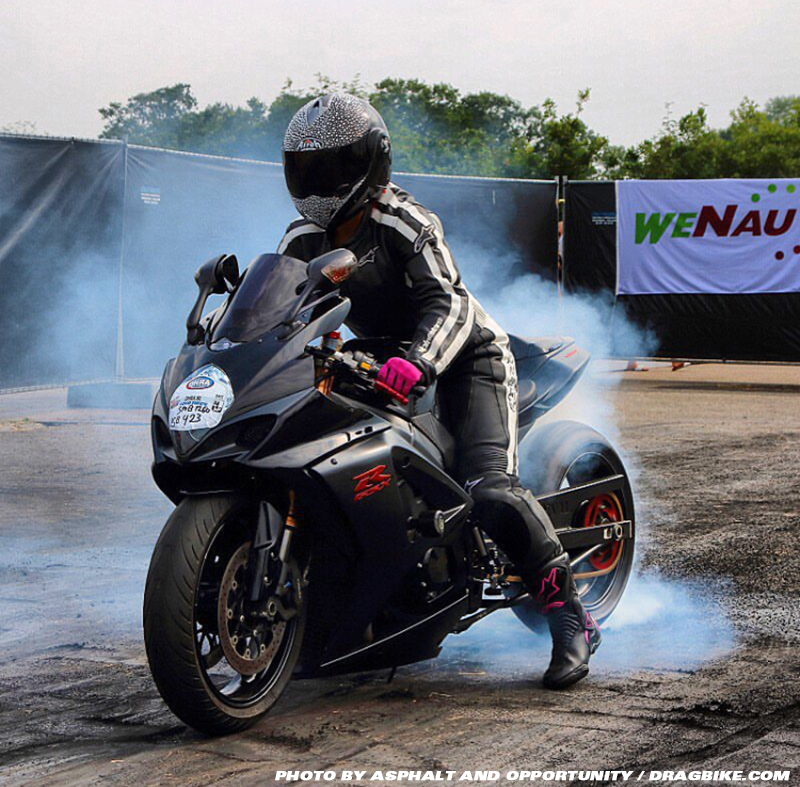 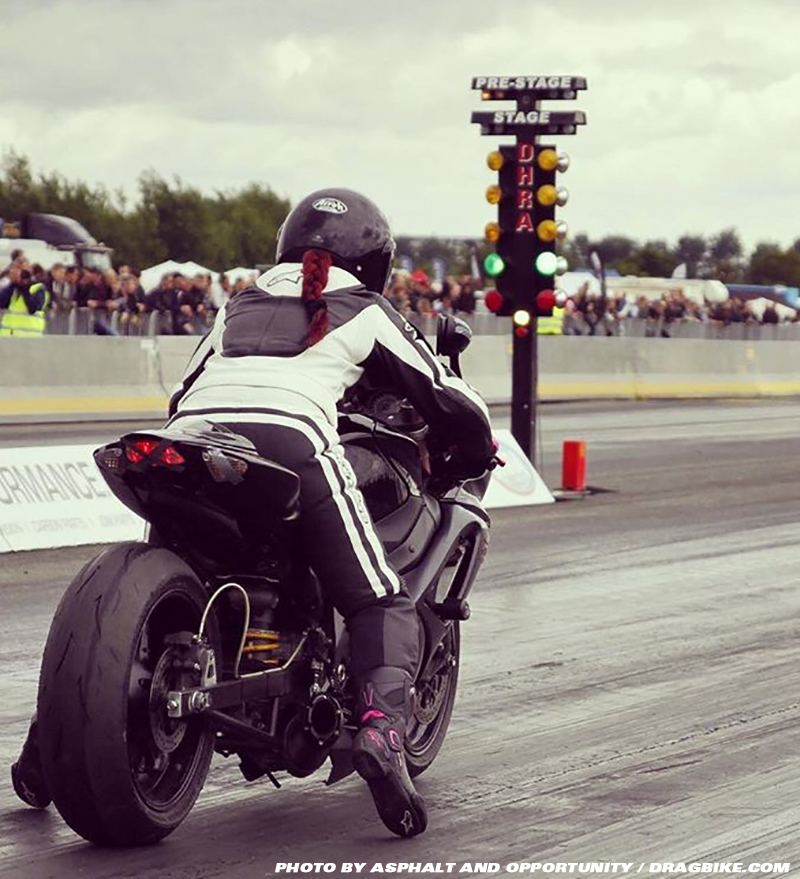 Q. It makes it easy when you have the right people in your corner and you have a good supporting cast around you. Do you have any sponsors and tell us about the recreation of your bike for the 2016 racing season?

I don’t have a sponsor because they hardly do that here in the Netherlands, but I do hope to get some one day. I do have an incredible support team around me called Easy Ryders 036 who have helped me out even prior to racing. I haven’t really added any modifications on my bike for the upcoming season except a shift light and a racing seat. 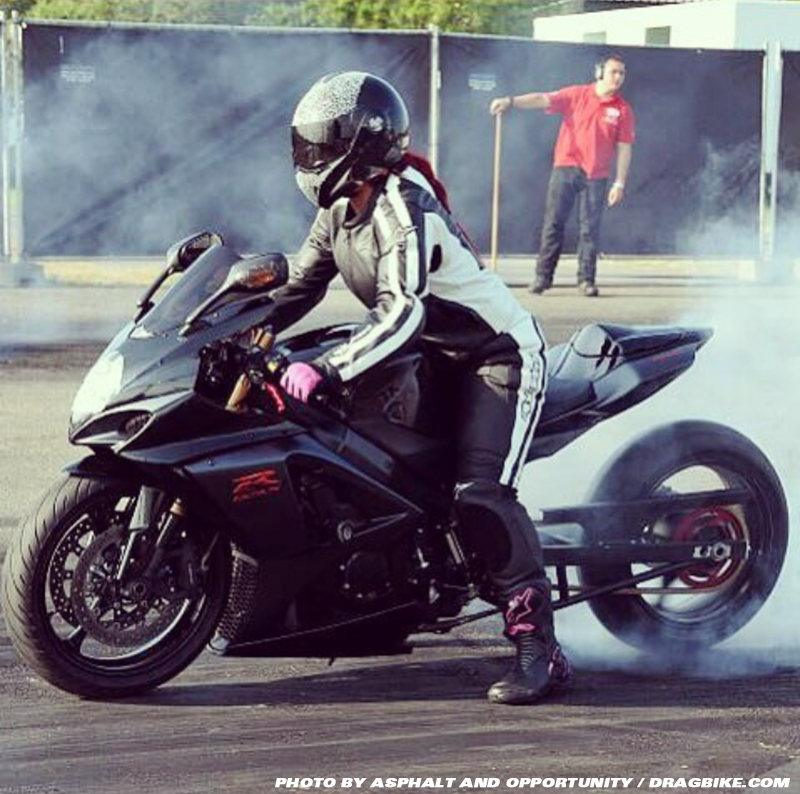 Q. Not everyone can make that transition from riding in the street or in a bike club to taking it to the track. Explain your passion and describe what keeps you racing? Do you have anyone that you look up to?

True, I really wish there were more cool ladies that race here in Holland. We have about 6 to 10 women. For me riding has always been a passion. I remember the first time that I got on a bike. As soon as I was comfortable riding, I began racing on the street, lol. The feeling when I’m in front of that red light waiting for it to turn green is amazing. The adrenaline kicks in and it’s just like GO!!! It’s in my blood, I can’t really describe it! Name a rider that I look up to, I really admire Crystal Dickerson, she is fire! (I wish the drag race world was bigger out here) 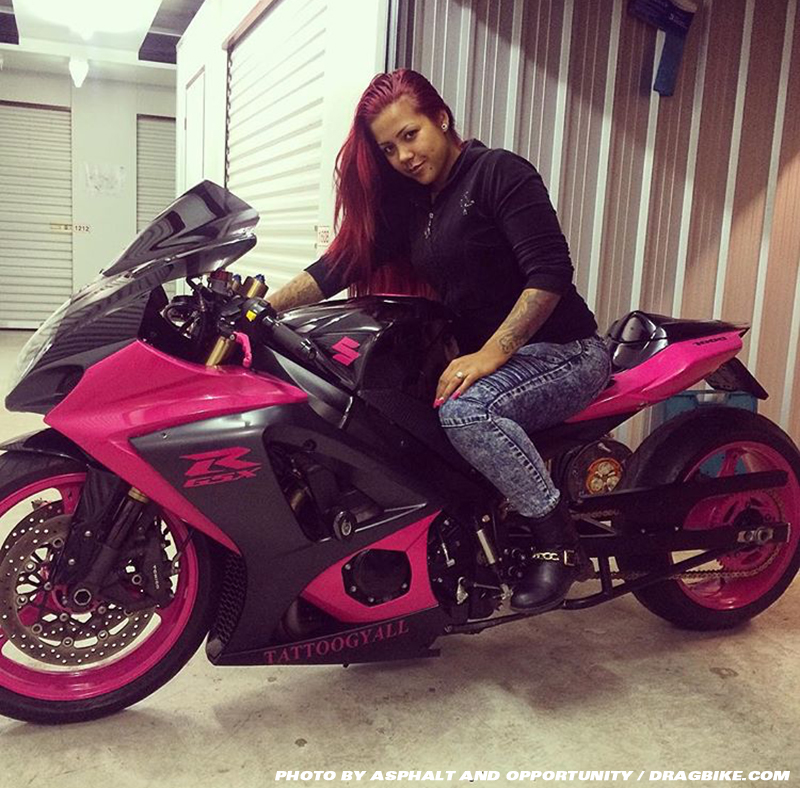 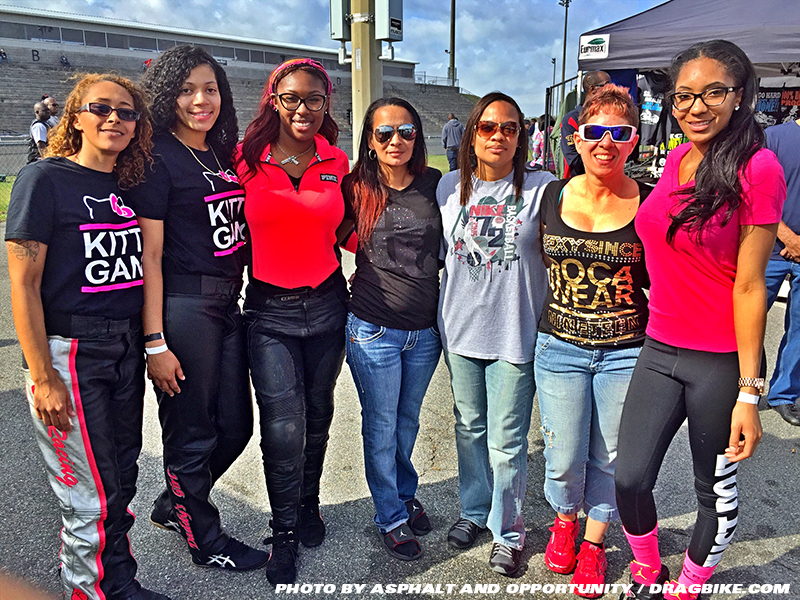