HomeColumnsBuilt to WinBuilt to Win: Zachary Applegate | The Next Generation 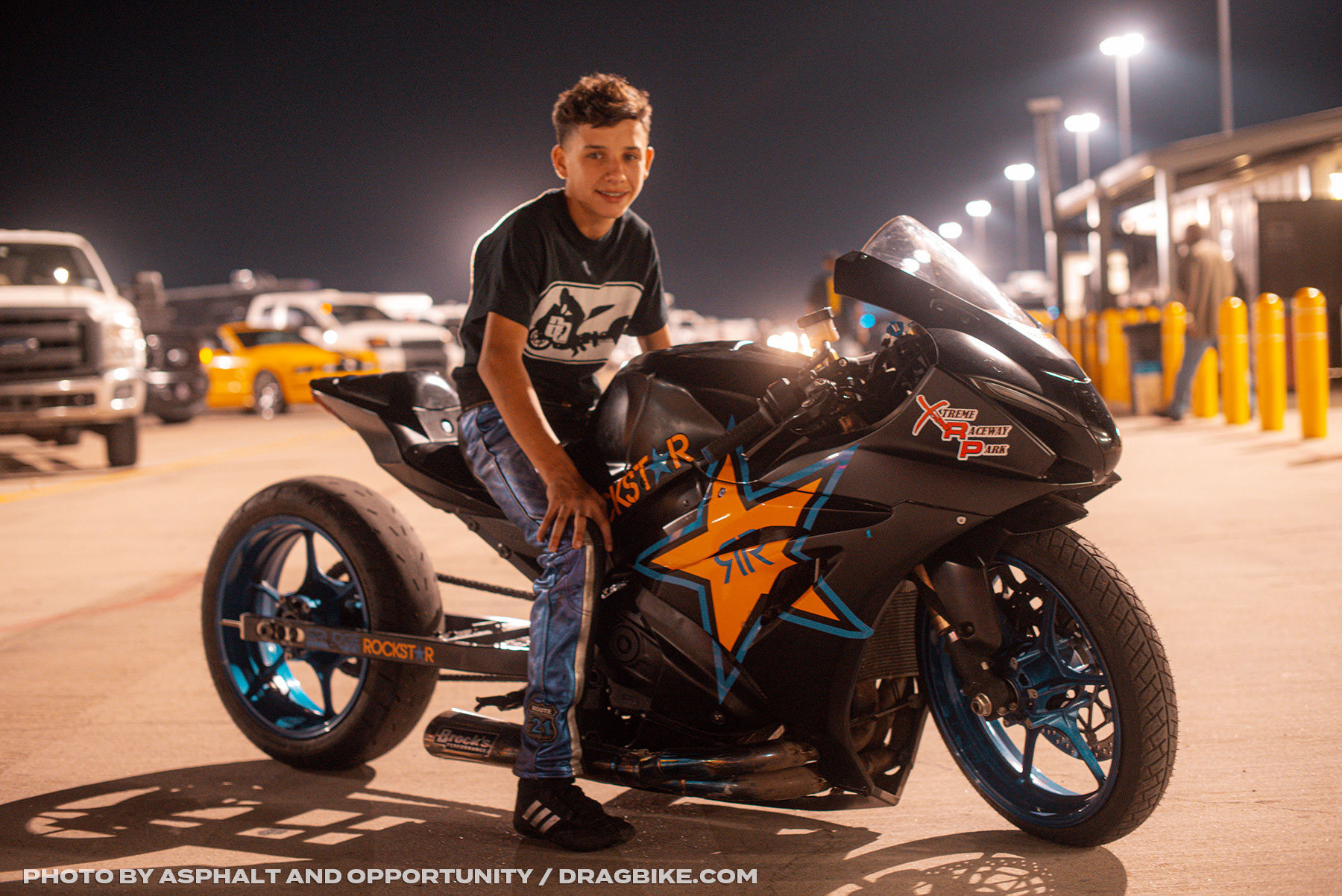 In 2020, During the midst of the pandemic Asphalt and Opportunity was able to venture out to the great state of Texas, not once, not twice, but three times this season. While in Houston, TX  we were able to meet up and see this young TEXAS phenom firsthand that everyone has been talking about. In my mind, I’m thinking, I’ve seen several young riders start out at young age (Matt Dozier & Kevon Crawford) and I can go back to stories that I’ve heard about two legends like Richard Gadson and Jeremy Teasley being introduced to drag racing at very young ages. For some reason after watching this young man, you left feeling like this kid might be the one for his generation. He has a passion for drag racing that is very rare to see amongst our youth these days … since the play station era began. When you see young racers coming up in drag racing, you know that it takes an excellent support system and this young man definitely has that around him. 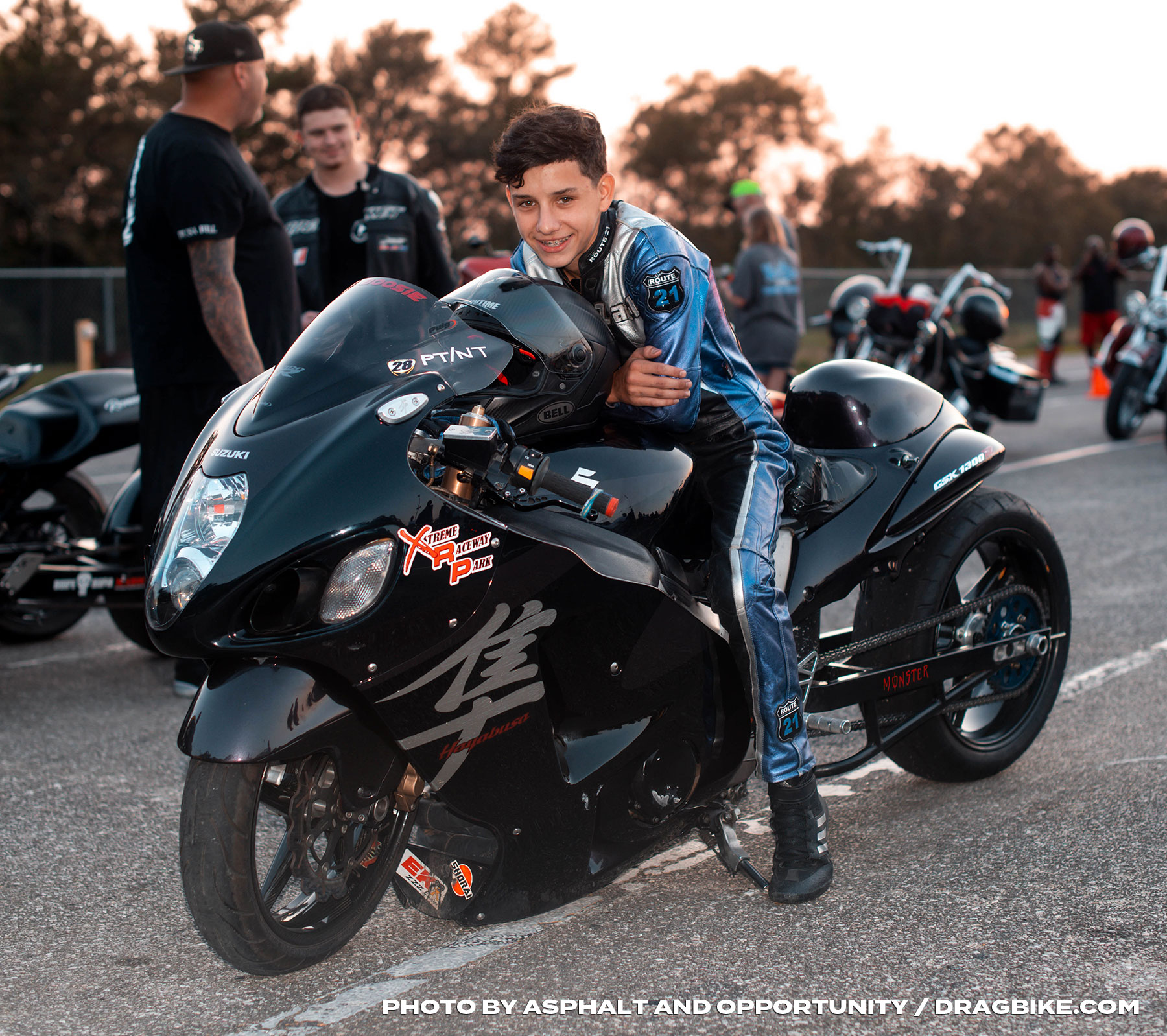 At what age did you begin riding motorcycles?

I began riding at age 4 and motocross racing by the time I was 5. My dad took me riding and racing 2-3 days a week for almost 2 years straight. I am currently 14 years old.  Early on, I was given the nickname “Showtime” and I was always first to hit all the big jumps at the track. 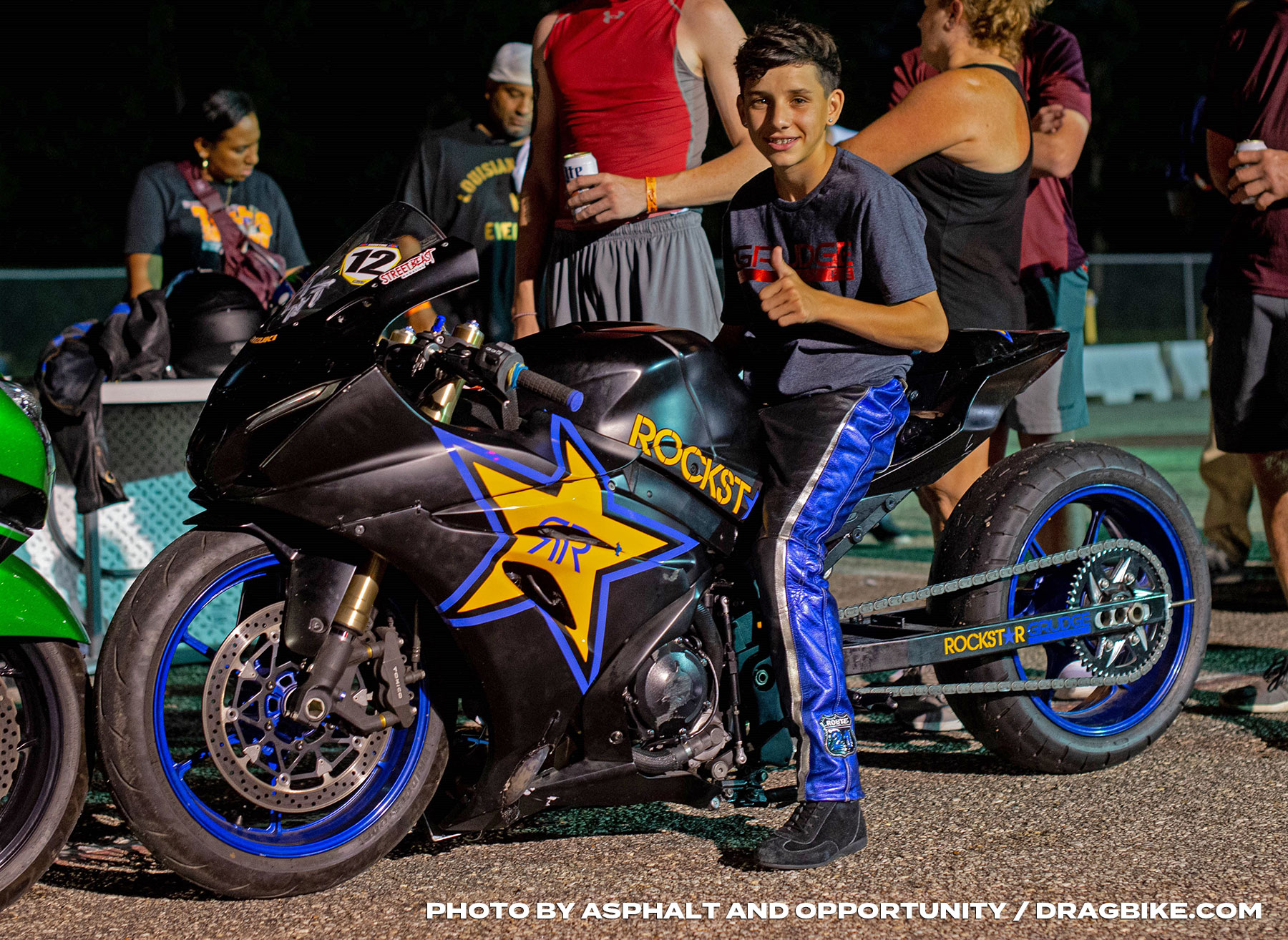 When did you realize that you wanted to try out drag racing, what was the process like, and how was that transition?

Lol…my dad kind of forced it on me. Racing motocross, I broke 10 bones. After I broke my first bone I recovered quickly and got right back into it. Even though I broke more and more bones, I never gave up because I wanted to be a professional motocross racer. By the time I turned thirteen I had broken ten bones all from racing motocross. About a year ago, my dad said, ‘enough is enough’. He built me a drag bike out of one of my RM85s. 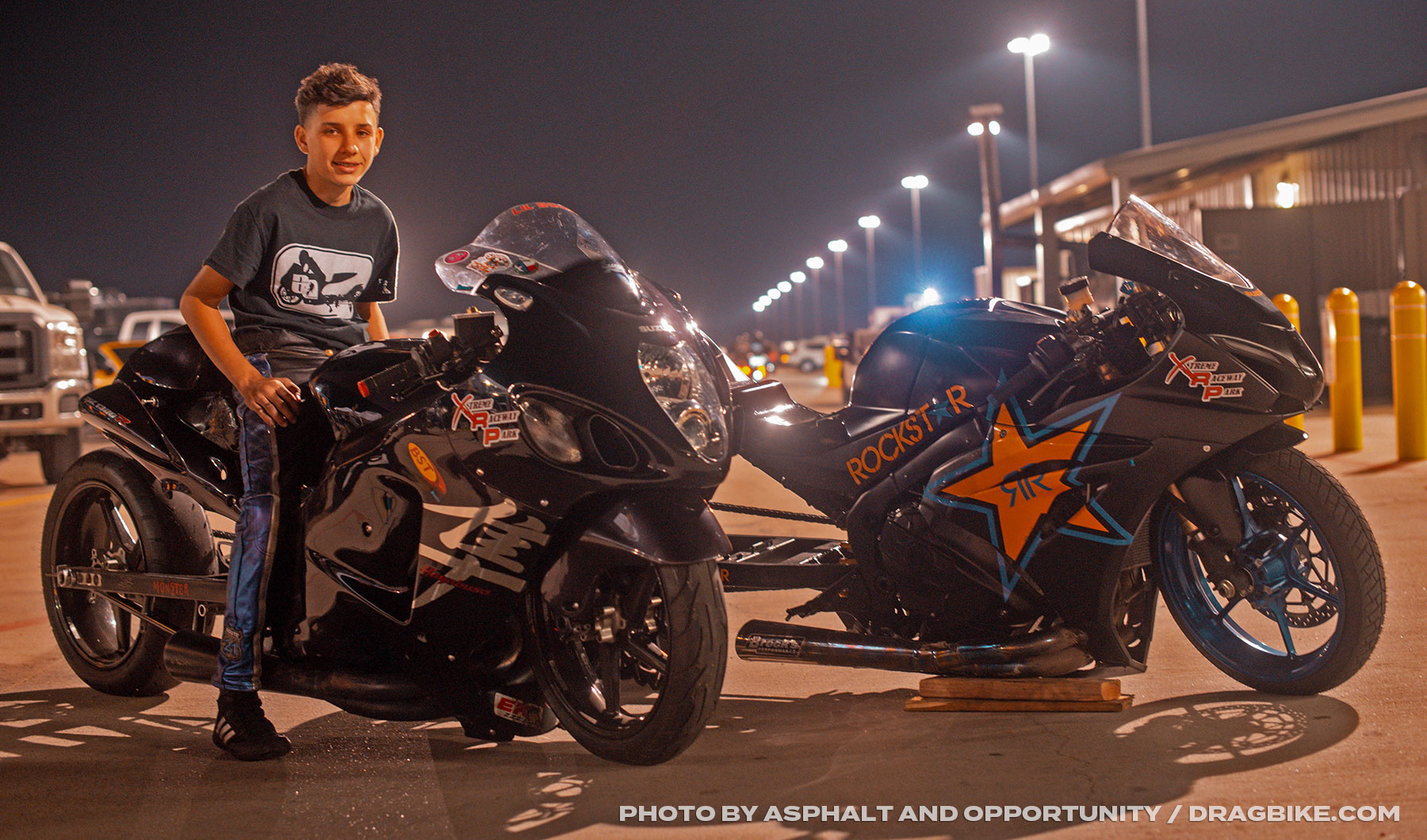 Once I started racing it and got comfortable… my dad asked if I wanted to ride his GSX-R1000 and at first, I was nervous, but I got over my fear and kept riding it from there. Lately, I’ve been riding my Dad’s Hayabusa and we have really been making progress on it. Now, as I learn to love drag racing,  I try my hardest to be the best and give it my all in every pass. 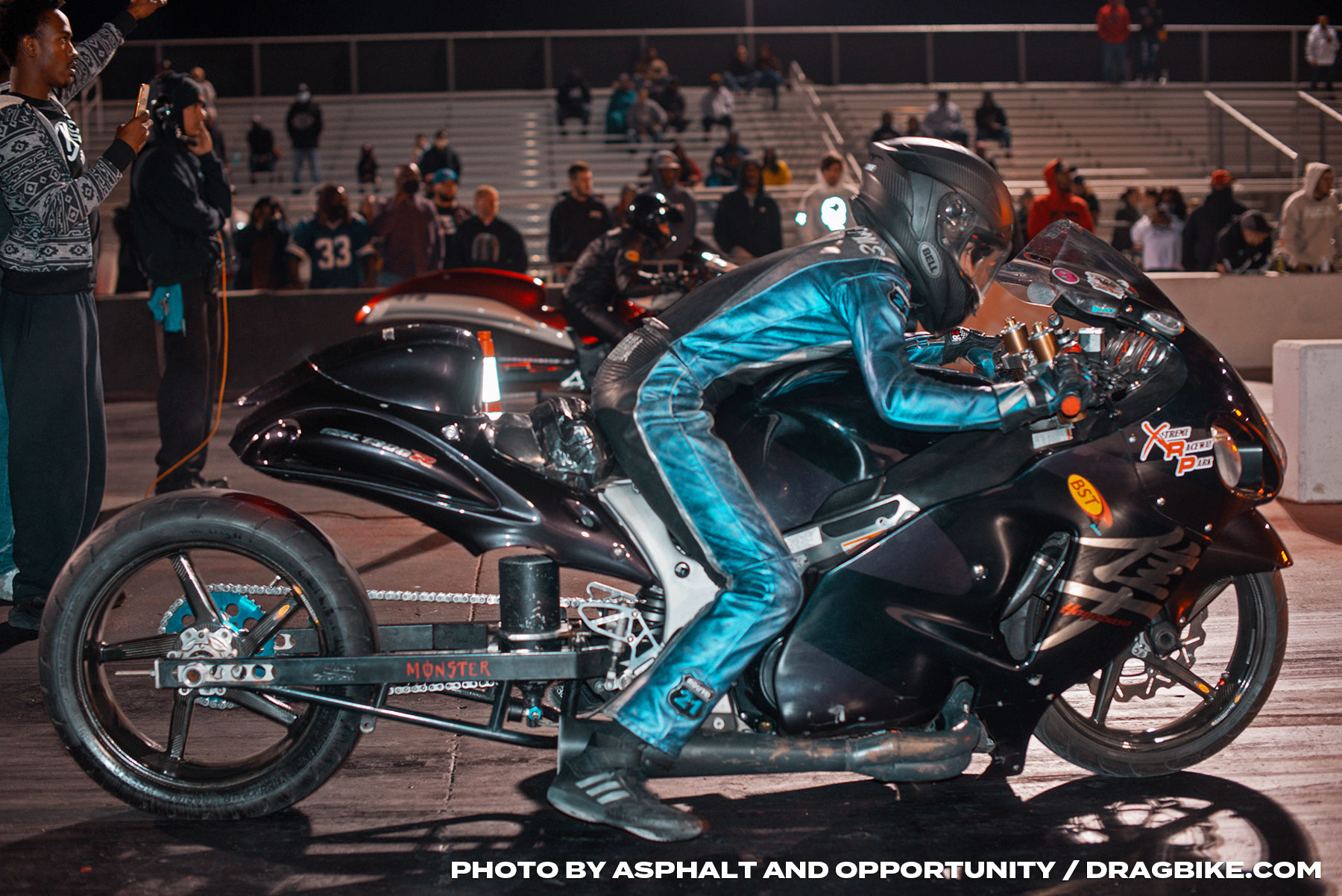 A father and son combination is always a special thing to watch in drag racing and it takes a lot of dedication from everyone involved on the team. It allows time to bond while traveling and working on these bikes. Question for Dad, What has been the best part about all of this for both of you?

The best part about it is we’re actually winning money. Racing motocross, you never won money, all you received was a plaque at the end of the weekend. 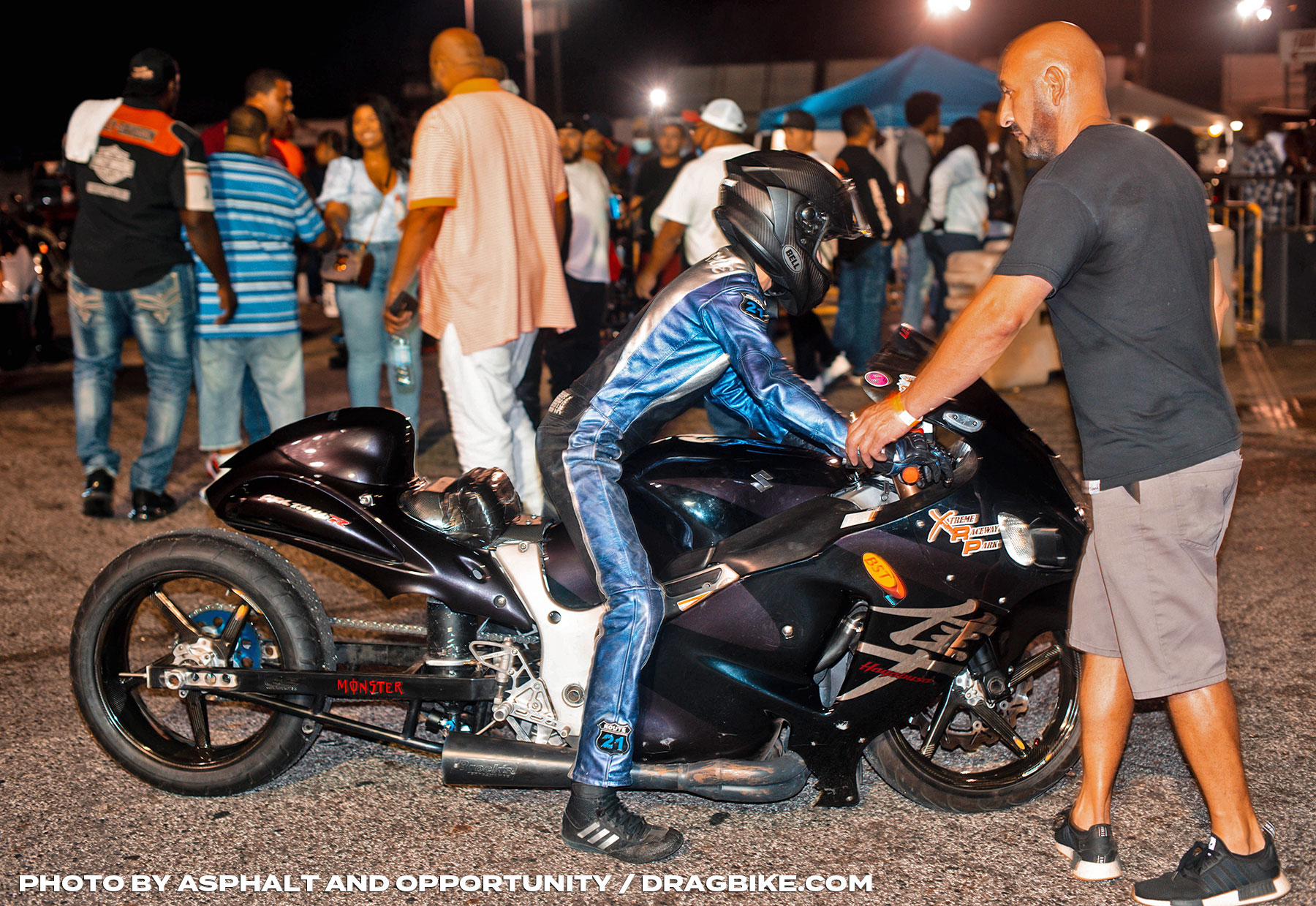 You have met a lot of motorcycle racers in this sport? Tell us what that has been like and what knowledge have you gained from them? Which racer or racers were you most excited to meet?

I would like to thank my dad for all he does. Super Dave Gebhardt is like having the coolest grandpa ever. He means the world to us and his help is neverending. Then, Richard Gadson is like a mentor to me and helps us out continuously. Meeting Kill Bill was pretty dang cool as well. People everywhere like me and I have fans already. 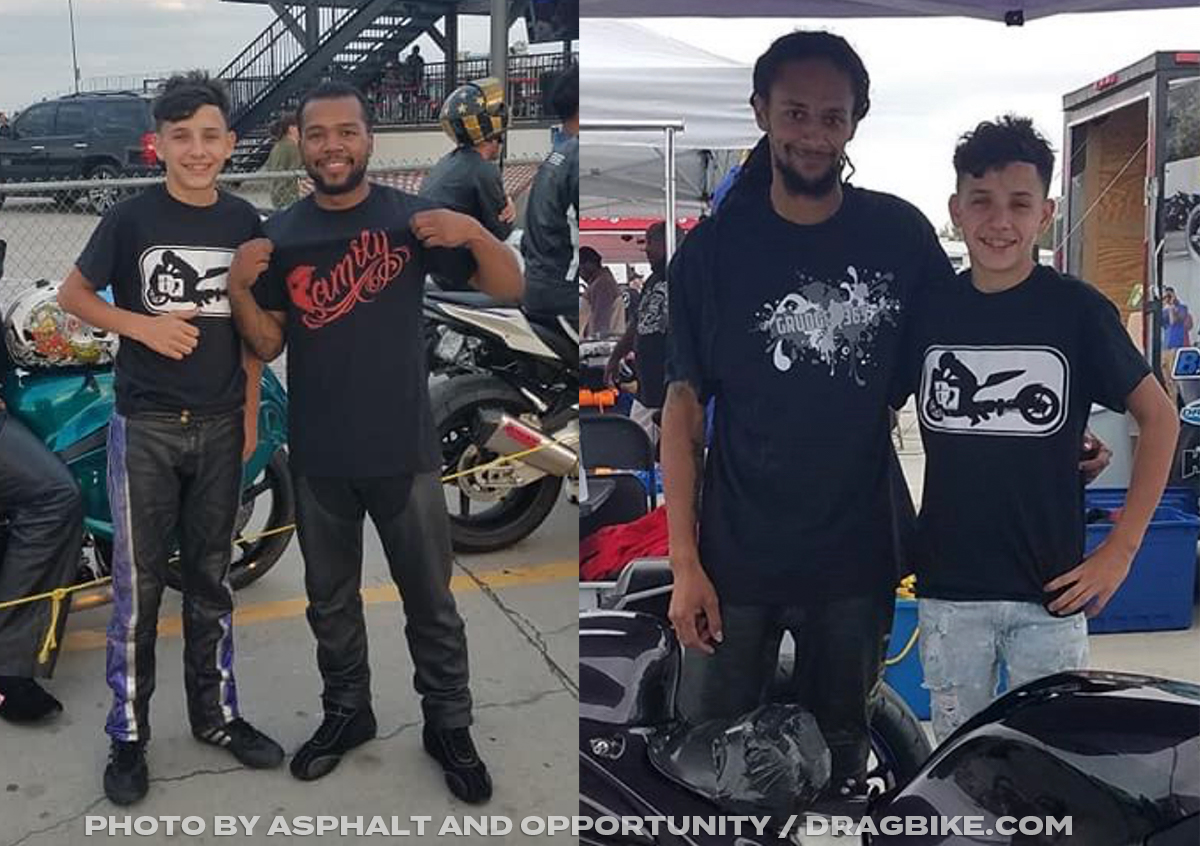 The state of Texas is a huge state and I know from my travels that it will break you off. Where can we expect to see the team at next season and do you have any plans of traveling and attending some races out of state in 2021?

We plan to put together a Super Stock bike to go play with all of the big names in XDA. Playing on Lil Boosie will have us in grudge races at most of the King of Grudge races next year. Looking forward to new experiences with Asphalt and Opportunity. 2021, if ya’ll don’t know…. “IT’s SHOWTIME” 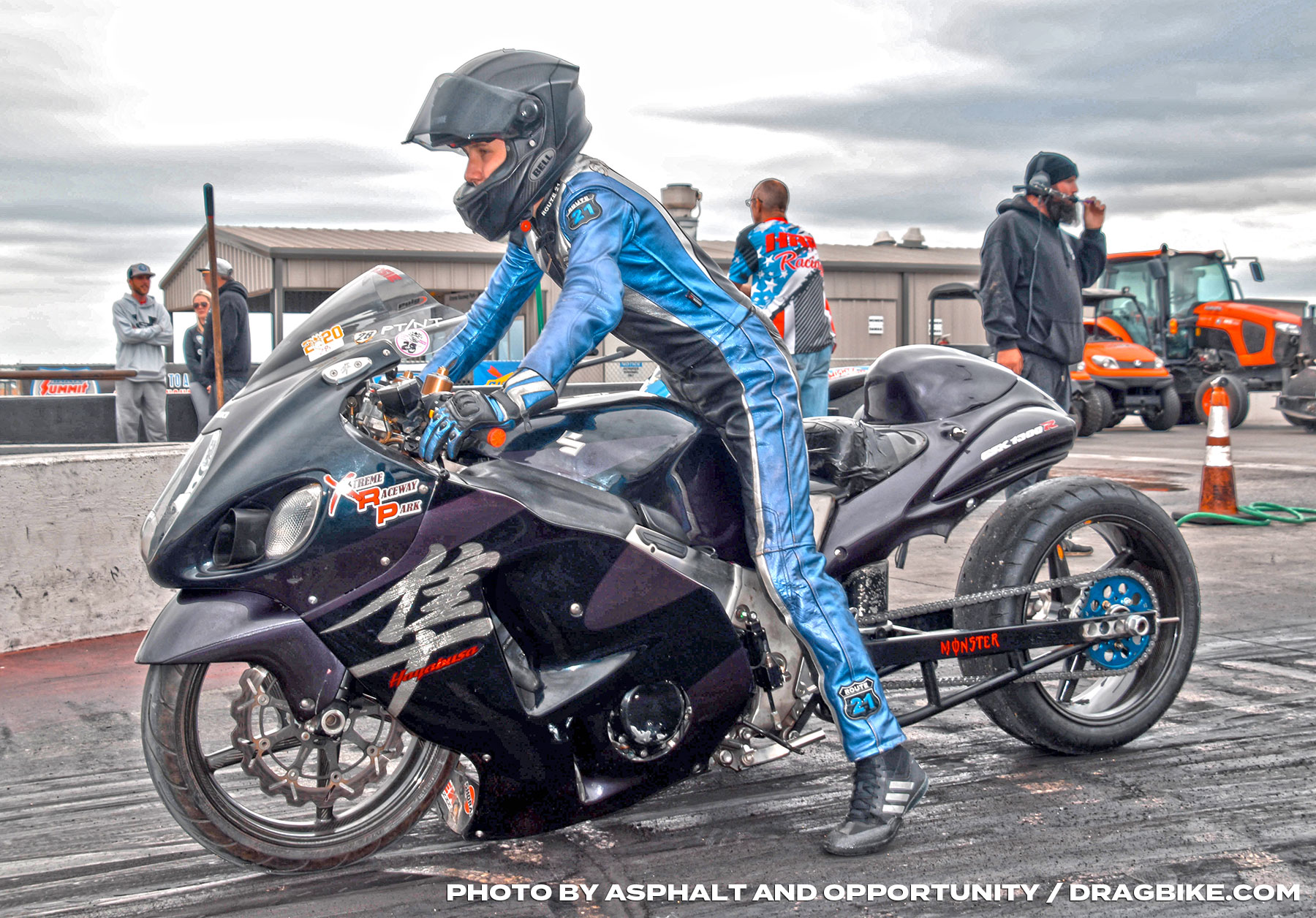 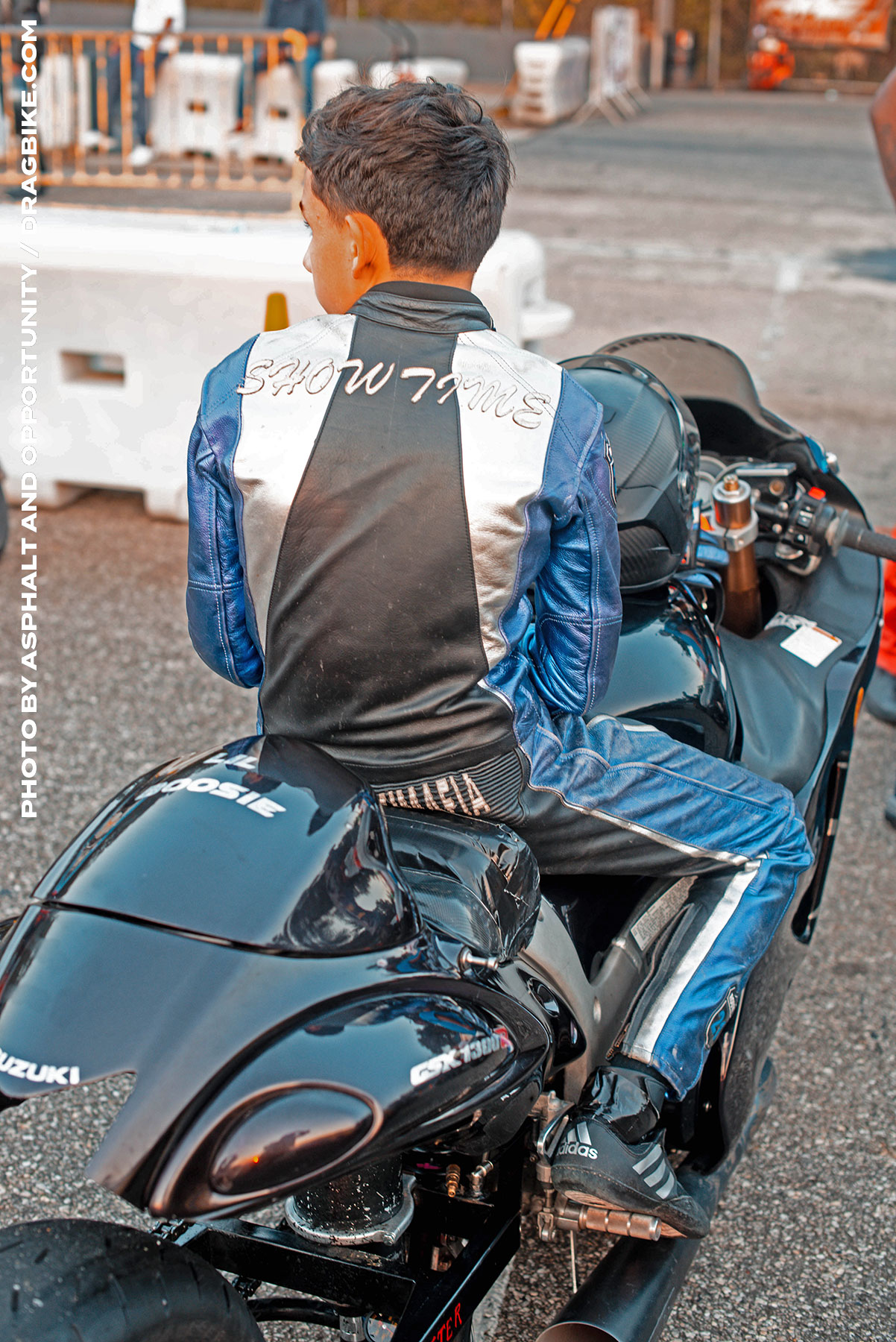 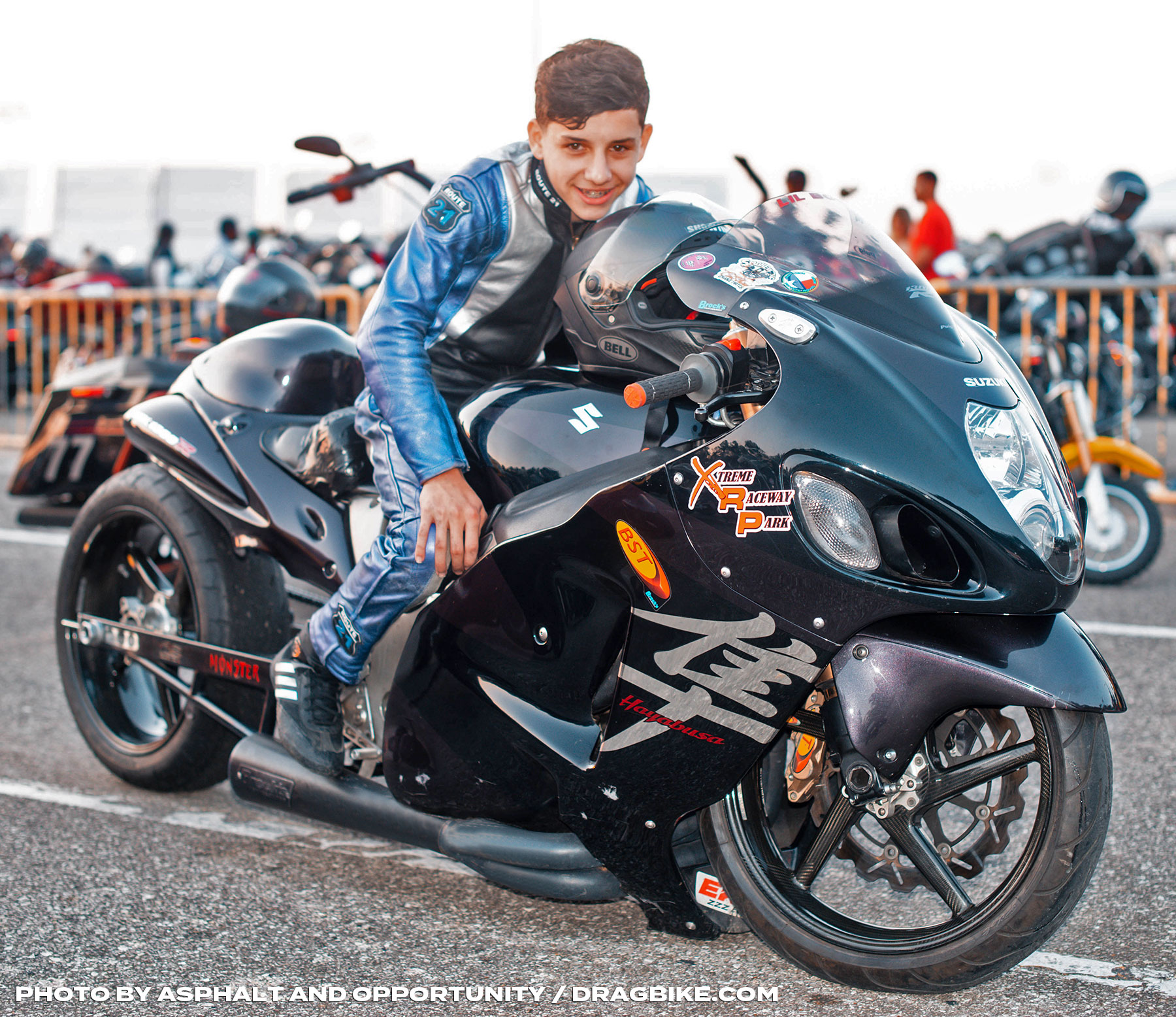 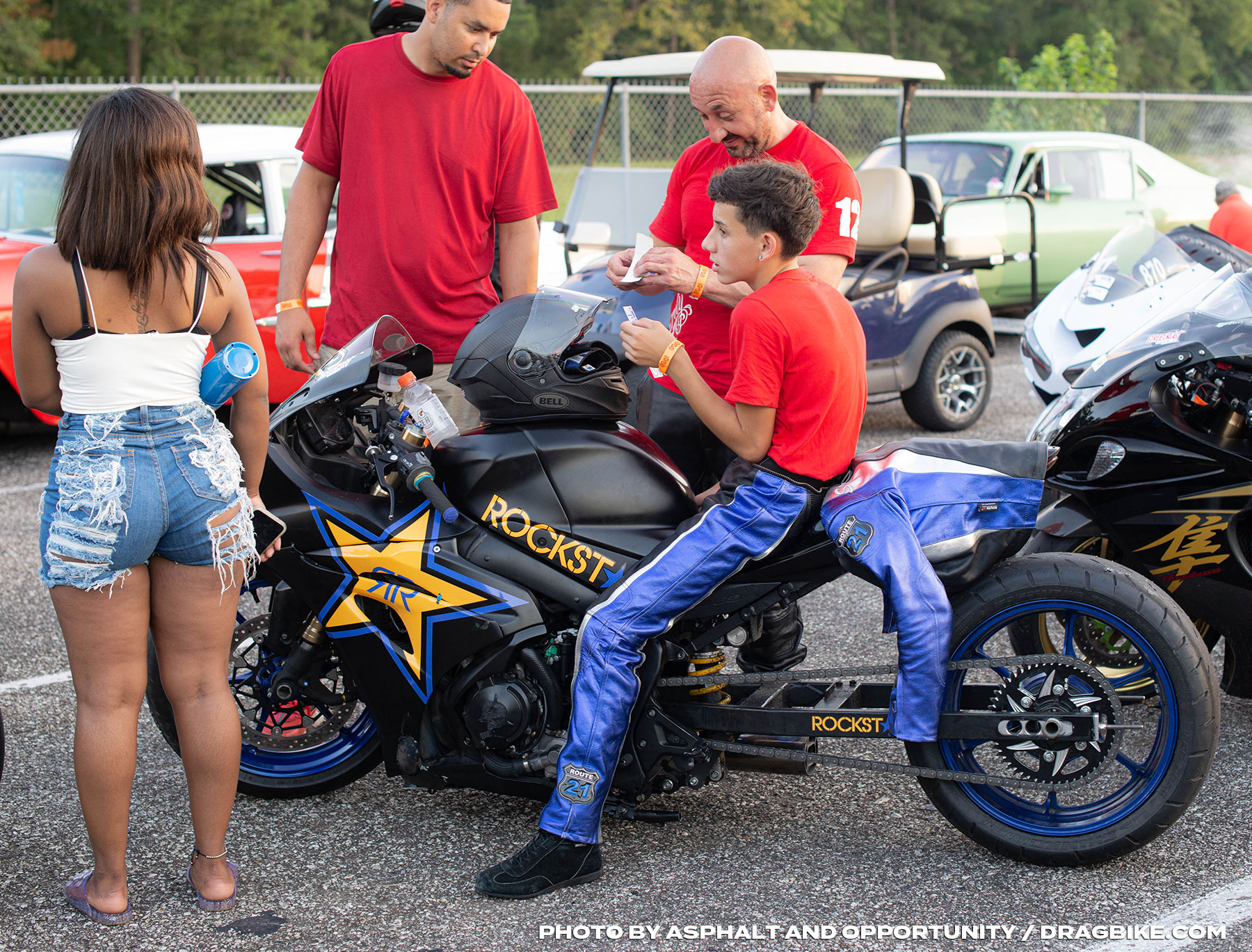 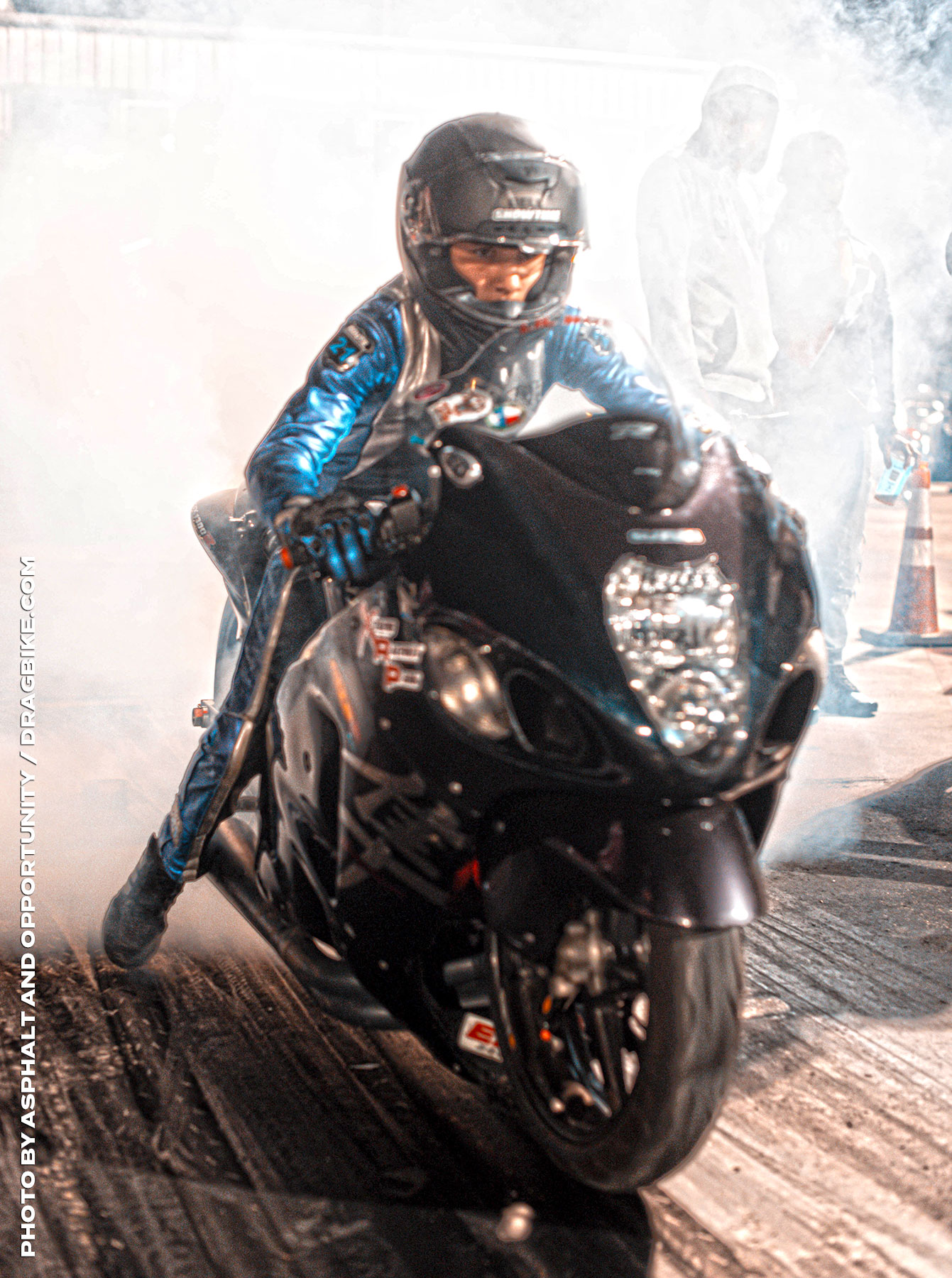