Home » Features & Columns » Candid Pictures of a Day at the Track: Prostar/Indy 04

Candid Pictures of a Day at the Track: Prostar/Indy 04

This is my second collaboration of an article
that included the help of my lovely and talented wife, Dianna. She was able
to take a different approach to the fine art of photography that I lacked apparently.
She took pictures of whatever she felt like, it didn’t matter if it had
framing or content or told a story. Yet, that was exactly what she did without
even trying. Then along comes myself. Here is my take on these photos and I’m
sure that my memory is fading on a ton of these shot’s so please be kind
to me. I feel lucky if remember my own phone number some days.

These first shots are usually the first glimpse
of racing activity when you come to a Prostar event, everybody lines up and
waits. Of course these volunteers happy smiles are contagious to say the least.
The Christian Motorcycle Association has always given a helping hand and I can
tell you all of us racers and vendors appreciate their time and efforts.

Here are some more happy faces you will encounter
when driving in to the track each morning.

Larry “Spiderman”
McBride Top Fuel racer gives way to my truck as I pull into the pits down Pro-Mod
row.

Here is a bird’s eye view of the Indy Pit
area. Can you spot your trailer?

One of the real concerns that the Prostar officials
have is the rule for those youngsters that ride on pit bikes. I think Rule 2.9.10
states it very explicitly! NO CHILDREN are allowed in the pits on any motorized
vehicle. Crewmembers excessively speeding or children riding in the pits are
subject to having their pit bike impounded for the day and are subject to a
$25.00 fine to reclaim it. If any child or unlicensed rider is caught operating
a motor vehicle of any kind, the team(s) associated with the vehicle and/or
operator will be subject to disqualification from the meet. A TEN-MILE PER HOUR
SPEED LIMIT WILL BE ENFORCED AT EACH EVENT. 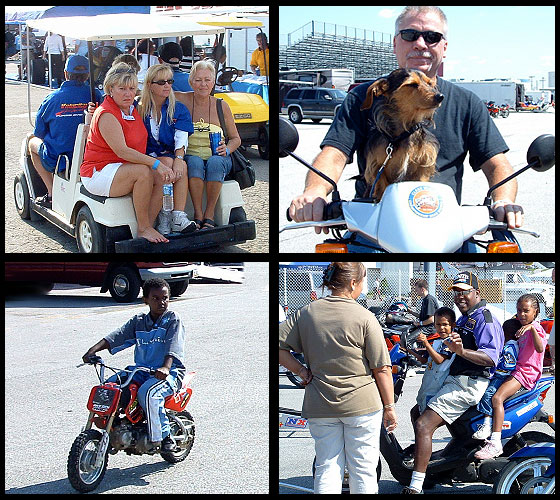 Can you spot the offender here?
Yes, the dog has a license in case you were wondering. 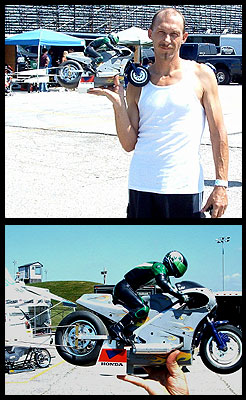 I saw this and just had to share it with you.
This thing came screaming by me at over 45mph. Don’t know who this guy
was or what he was holding, but it was awesome, a Handmade Radio Controlled
Dragbike. Who’d a thunk it. 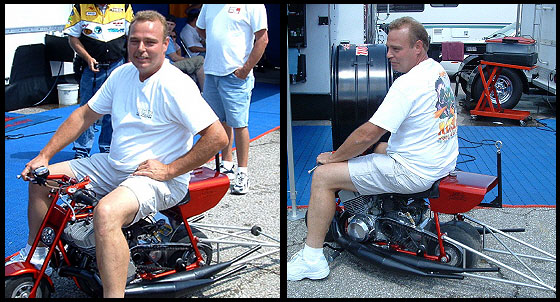 Now here is a pit bike that has some cajones.
It looks like a Kawasaki 500 triple, maybe a 750 with stinger pipes. I wouldn’t
want to twist the throttle on that one. Remember to keep it under 10 MPH! 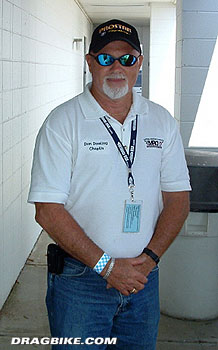 Here’s a guy who is always there at just
the right times. I have been coming to AMA/Prostar races for many years and
if I didn’t see this gentle man on site at every single event, I would
be dismayed. Our very own official Prostar Chaplain, Don Dowling. He holds a
non-denominational chapel call at every race on Sunday at about 8:15am and is
always walking the pits and track meeting and greeting. When you see Don, stop
him, shake his hand and say Hi. I will always welcome that man in my pit area. 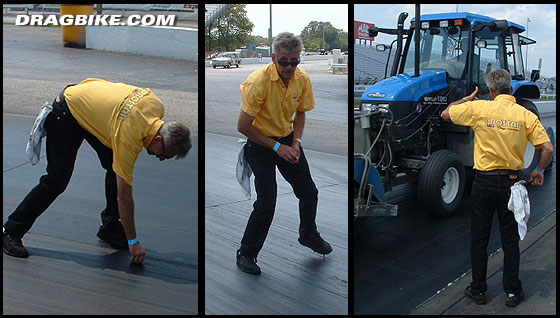 Here is another very special person from the
Prostar staff. Mr. Tony Williams the official starter for AMA/Prostar and if
you are a racer, you want this man in your corner. He is the last guy you will
see before you begin your trek down track. He not only is responsible for being
the last safety inspector before you launch, but also has to groom the track
and make it safe before every round. He supervises the track crew so that the
track is at it’s best. You wouldn’t want to be in Tony’s shoes
because he is the one that has the FINAL say so as to whether or not you are
allowed to go down his track. If Tony spots any malfunction what so ever that
could endanger you or your bike, he will not hesitate to pull you off of the
starting line. He is also responsible for making those very sensitive calls
that can drive a racer crazy. I wouldn’t and couldn’t do his job,
I know, I’ve tried. 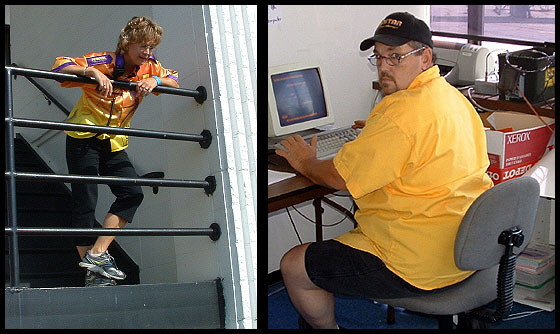 Since we’re
on the subject of Prostar officials, you can’t miss Nettie Damron who
is the Staging Lane Manager and at the Indianapolis event, she was the Race
Director. Being the Race Director requires that person to wear many hats with
bravado, sensitivity and kid gloves. I had the honor of being that person for
a few races and believe me Nettie deserves a big round of applause for pulling
off a very well run event. Another person no one ever gets to see is Tom Lachance.
Tom is Prostars resident statistician and computer guru. Without Tom at the
helm in the tower at every event, no one would know who did what at any of the
events past. Because of Tom, the Tower runs smoothly and efficiently. 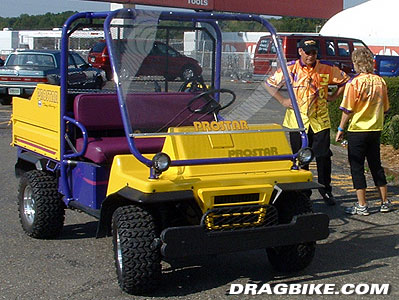 Of course, I see that Scooter Kizer, CEO of Prostar
and Nettie Damron are having a quick conference over race activities. The Race
Director usually prevails over track operations decisions, but the CEO will
always have the final say. 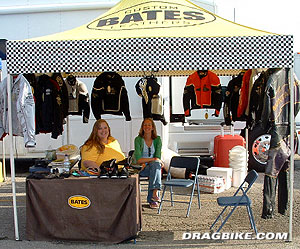 Dawn from Bates Leathers is seen here taking
a short break before sizing up another customer for custom race leathers. She
does a great job and Bates Leathers are known the world over for Custom fitted
Race Leathers as well as Street wear for the Motorcyclist. Whatever you race,
Bates will handle your leather needs.

Look what the cat dragged in, the Brown Brothers,
Pedro and Dan. Pedro has the handsome beard. Dan Brown was Crew Chief for the
S&K Racing Pro-Mod for many years and was named Mechanic of the year a few
years back. Oh my goodness, isn’t that Brian “The Fly” with
his son? Why yes it is. Brian was also out of the S&K Racing stables flying
on a Yamaha a few years back. Brian, come back, Yamaha needs you. 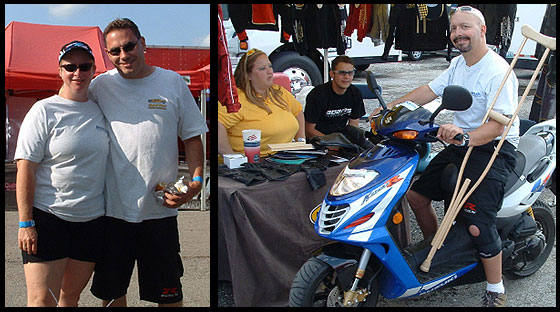 Here is Dave Owens and his wife caught sneaking
around the pits. Dave holds the Land Speed Record at Maxton for the Fastest
Aspirated motorcycle in the 1-mile. He ran 211MPH in just 1 mile on motor only!
Oh my, here is Brock Davidson on crutches? Brock explained he had a Torn ACL
and was unable to ride for a few months. Hurry and get well Brock, your team
needs you. Brock is also known for his Brock Generation III exhaust systems,
among many of his other successful aftermarket parts he sells.

You
probably know him as BDE, Brock Davidson Enterprises. He was also the first
man to put a street bike in the 7’s on his custom Suzuki Bandit.

Here is our own Dragbike.com Website hostess,
Brandi. She rides a very fast GSX750R and has been in many projects of late.
There is a rumor going around that she is being groomed to be the first woman
on a bike to break into the exclusive 200MPH Club at Maxton next year. Not only
will she have to go over 200MPH, but also she will have to break a record set
over 200MPH. I’m thinking she will have to go at least 211MPH to get in.
But I hear that Tiger Racing is taking her under their wing, I mean paw and
she is in discussions as we speak to ride the “Tiger” next year.
We’ll keep you informed on that one. 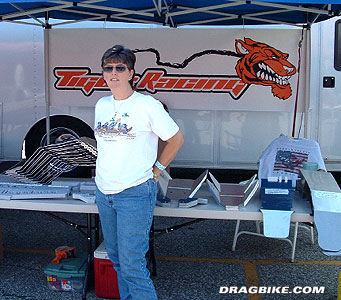 Here’s Mrs. Tiger
Racing, Dianna Caputo in front of her midway display next to the Schnitz
Racing trailer. 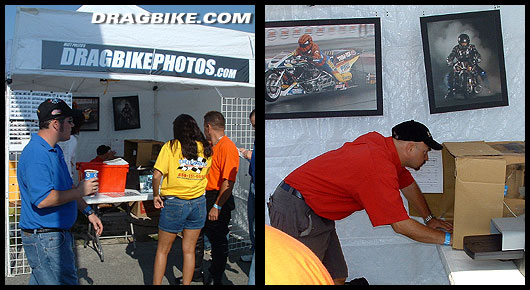 We caught the big Kahuna himself,
Matt Polito at his booth/tent, Dragbikephotos.com

If you were ever at a Prostar event
and wanted a picture of yourself on your bike, he probably has it on file somewhere.
Visit his website and you can view some of the coolest photo’s ever taken.
Order your favorite riders picture and have them autograph it for you. No one
does it better than Matt when it comes to Drag Bike Photo’s. 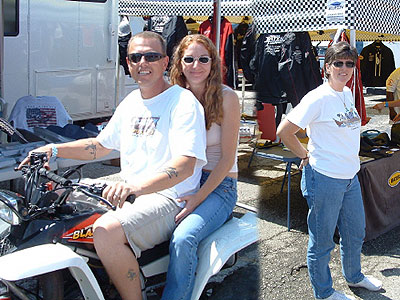 Don and Cindy from Extreme Racing
in Oregon, Ohio (my other wife…inside joke) and my real wife Dianna. How
did she get in here if she took all the pictures? 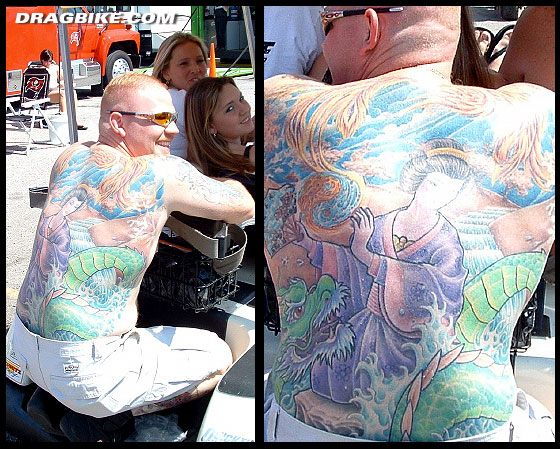 I just couldn’t resist showing you these.
This gentleman had a very colorful display on his back of a Japanese Geisha.
Sorry the photos were a little bright. 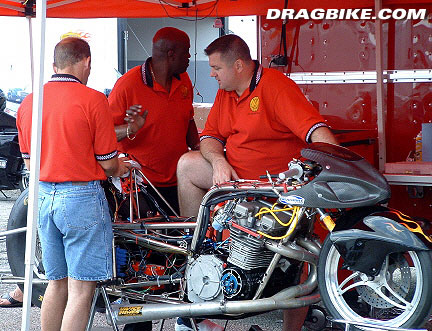 The owner of MRE from Florida contemplates his
next move for the MRE Pro Mod bike. 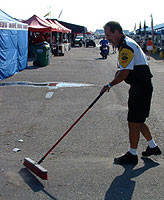 We caught Larry “Spiderman” McBride
using the push broom out in front of his tent. He said he was just doing what
he does at the shop, Push broom. I’m used to seeing Larry’s hair
on fire when he goes over 240MPH in the quarter mile on the Pingel Top Fuel
bike, not pushing a broom. 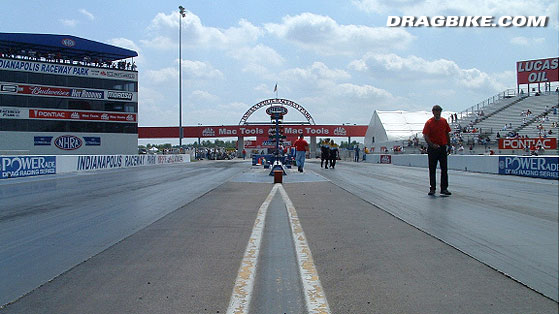 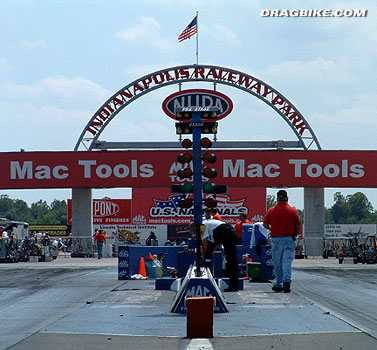 Here’s a view you don’t get to see very often, looking
back up track towards the staging lanes from center track. 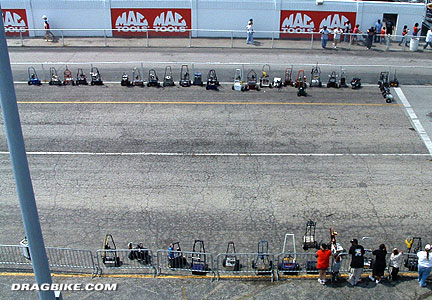 So that’s where they park all those little battery carts
when they’re not using them. I wonder how they know who’s is who’s? 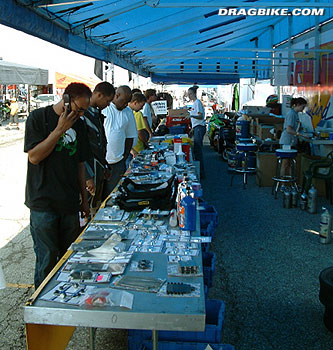 I need a chain. I want a battery. Do you have any nitrous jets?
The Schnitz Racing trailer is always a blur of activity in between rounds.
I’m going to just let you look thru the rest of these photos and enjoy.
I hope you find who you are looking for and if not, maybe next race.
Until next time, Safe Racing to All.

Guy Caputo can be reached at GuyCaputo@buckeye-express.com 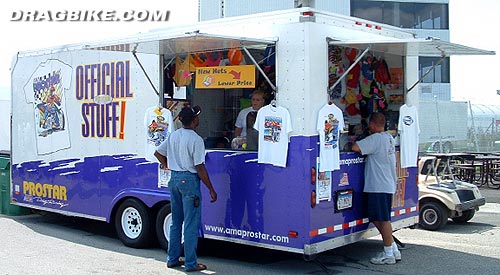 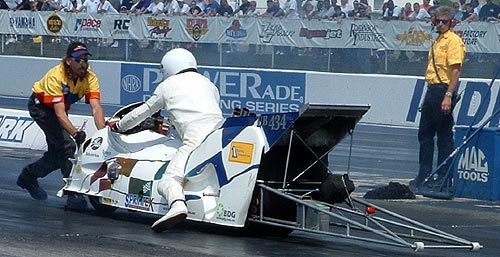 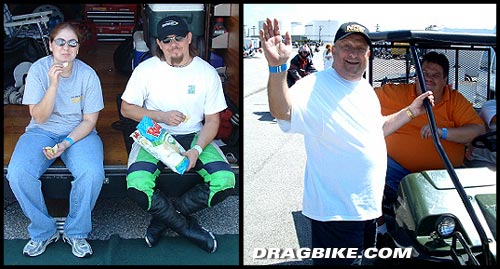 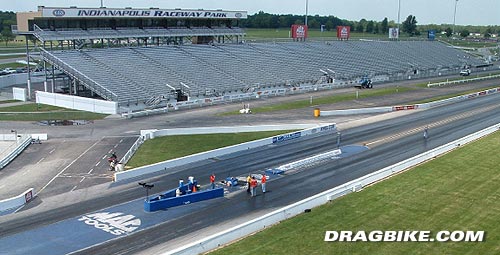 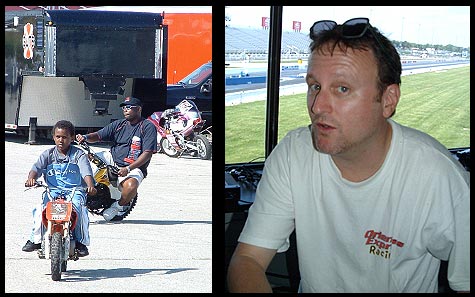