Larry McBride : I am Spiderman, not Superman 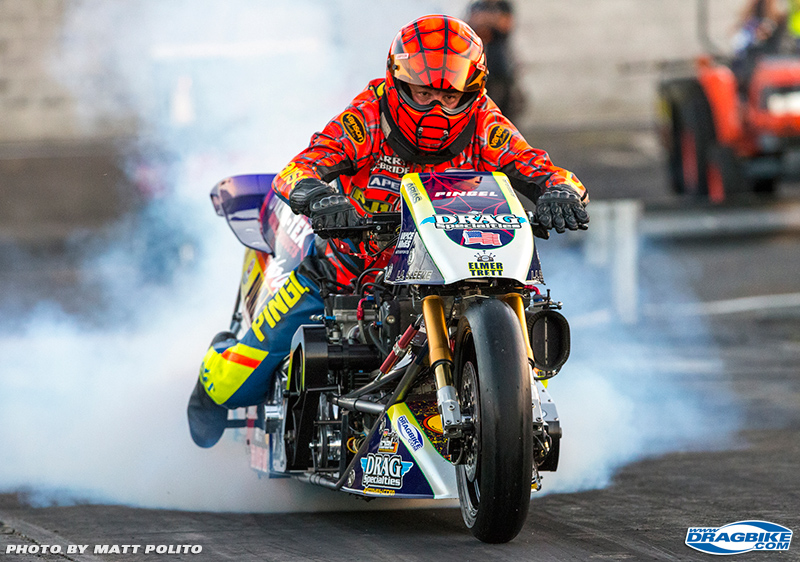 Catching up with Larry McBride

At the IDBL Orient Express US Motorcycle Nationals at Atco, Top Fuel Motorcycle legend Larry “Spiderman” McBride suffered a severe engine explosion during a match race with Dave Vantine.  The incident has been well documented.  Now a week after it happened we caught up with McBride to see how he is doing and what his plans are.  The phone call interrupted him as he was engaged in playing minecraft with his granddaughter, Emma.

This was actually the third time McBride suffered injuries in a racing mishap on at Top Fuel Motorcycle.  The first was in 1986 during a match race with Elmer Trett at Piedmont Dragway.  With no guardwalls in those days, McBride came off the racing surface, onto the grass and down into a drainage washout.  The bike tumbled and McBride went over the handlebars, breaking his wrist, hand and collarbone.

The second was in 1992 in Gainesville at the Prostar Sunshine Nationals.  After a full-throttle pass the bike was headed for an opening in the guardrail in the shutdown and McBride decided to “depart the motorcycle”. He came off the bike but only suffered a broken toe and some road rash.  The bike, however, was a write-off.

The 1992 crash provided the impetus to build his next bike, titled “Blue” which first hit the track in 1994.

Blue is perhaps the most historic machine in the sport of motorcycle drag racing.  McBride ran the first five second run in the sport on Blue in Houston on October 31, 1999 with a run of 5.99 seconds.  In the over two decades it ran, Blue brought McBride to 13 national championships.

During our conversation, the first thing McBride wanted to relay was his appreciation for the support he has received.

“I don’t what to say. I’m humbled.  I’m overwhelmed,” he said.  “There are no words for it.  I am just a racer. I’m no different than the folks racing their ET bikes.  It’s just that my motorcycle is faster. It is unbelievable how many people have reached out to wish me well.” 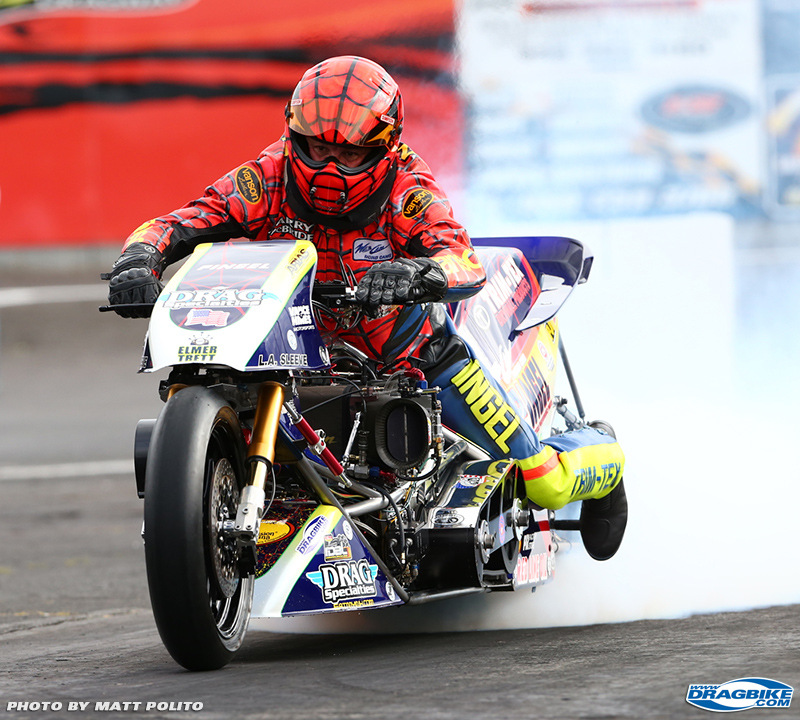 From there we got into the incident itself.  It happened during a Sunday run alongside Vantine.  Both riders smoked their tires and were on-and-off the throttle when a ball of fire and huge concussion came from McBride’s bike.

To set up the explanation of what happened, McBride made note of the amount of fuel, which is pumped into a nitro motor.

“In today’s top fuel racing we put more and more fuel into the bikes,” he said. “We are at the stage the top fuel cars are at.”

“It smoked the tire and I can usually get a way with peddling it,” he continued. “On that particular run it hydrauliced because of the amount of fuel we put into it. It actually happened when I came off the throttle. It was right around 1000 foot and probably about 180 mph. We didn’t get any computer reading because it burnt all my stuff up.”

(The term “hydrauliced” refers to a situation where a nitro motor is fed fuel which doesn’t burn.  The non-compressible liquid is sought to be compressed by the piston and something’s gotta give.) 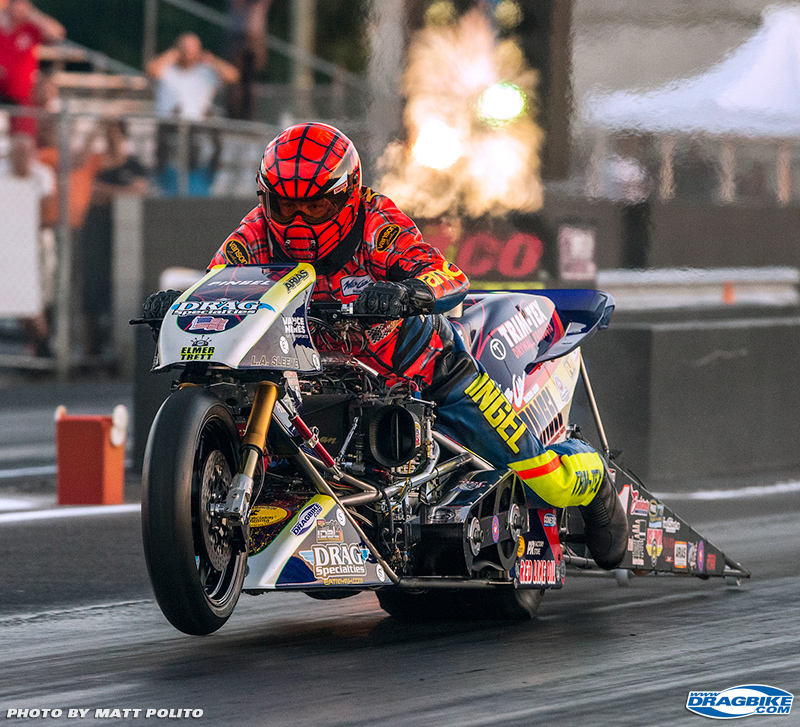 “When it initially happened the frame rail hit me in the chest the explosion was unbelievably loud. I knew I had to keep my composure to stop it bike.

“I saw the ambulance I said ‘I need to get to them’.   I locked the back brakes – I couldn’t use the front brake because the backbone [of the frame] was gone and the chassis would flex when I put the front brakes on.

“I dragged my boots and wore them down to my socks,” he said. “And the were a brand new pair of boots, too…”

“I got it stopped. I knew I had to get away from the bike and ran to the ambulance. They ran past me to put the bike out.  I said ‘Hey help me!’ I thought I was on fire.

“It didn’t hurt that bad because my adrenalin was pumping.” 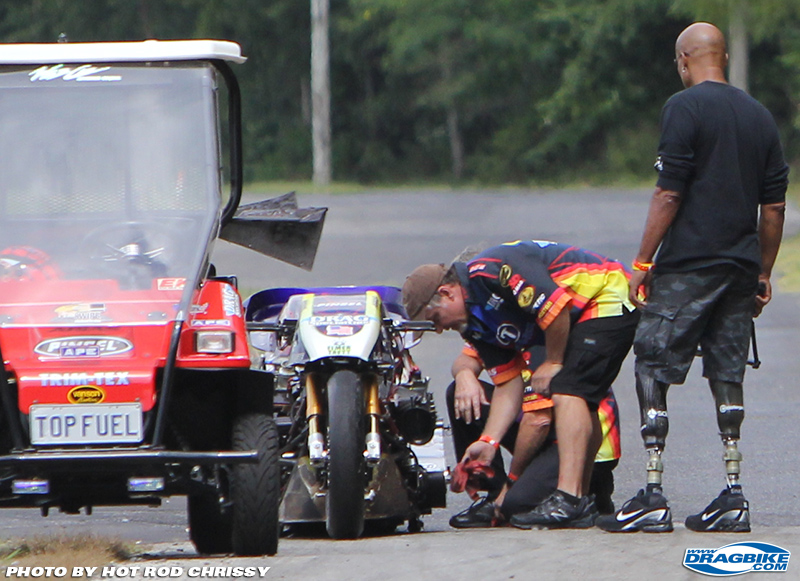 McBride suffered 2nd degree burns right calf, left thigh and left calf.  He noted that the rumor was not true, and his “man parts” were unaffected.  “I’m 57 if nobody else likes them I still do!” he said.

In one of the most noted moments of the day, the ambulance crew went to cut off his Elmer Trett t-shirt but it wasn’t going to happen.

Since McBride’s mentor, Elmer Trett, died in a racing accident at Indy in 1996, McBride has always worn an Elmer Trett T-shirt whenever he makes a run.  While McBride has several Elmer shirts given to him by Jay at APE, the one he was wearing that day at Atco was the original one, with the tatters and holes to prove it.

Larry asked the EMTs not to cut it but they looked like they were going for it anyway.

“Don’t do that!” said Vantine to the EMT with scissors in hand.  They must have seen the seriousness in Vantine’s eyes as they left the shirt intact.

In the ambulance it was determined that McBride would need to go to a burn center and since the closest one, at Temple University Hospital in Philadelphia, was a 45 minute ride, a helicopter was called in.

In the helicopter McBride had IVs in both arms.  One of the paramedics asked him to describe his pain level between 1-10.

The helicopter landed up top of hospital and McBride noted that when they got off the elevator “12 to 15” of the hospital staff were waiting for him. 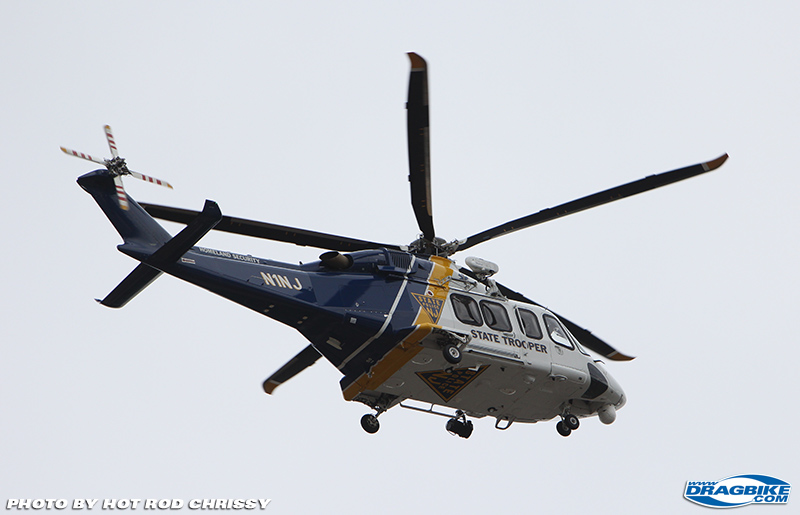 “I have never been treated so well in a hospital,” he said.  “These people were on top of it.”

His wounds were cleaned and dressed the wounds and the first thing McBride wanted was to get back to the track.

“I told them I wanted to leave to get back to the race track to let everybody know I was OK,” he said.

“People were texting me pictures and videos of the explosion. One of the doctors said they wanted a copy for training.”

Veteran racer and Philadelphia resident Reggie Showers volunteered to bring McBride back from the hospital to the track.

Showers, an Indy winner in Pro Stock Motorcycle, is a double amputee.  He lost his legs as a child when he was electrocuted while playing in a railway yard.

He is an inspiration to many and the perfect man to give the Spiderman a lift back to his racing family.

“Reggie picking me up was the coolest thing,” said McBride. “He has been through much worse than me.  He assured me it would get better.”

Back at the track McBride surveyed the damage to Blue. 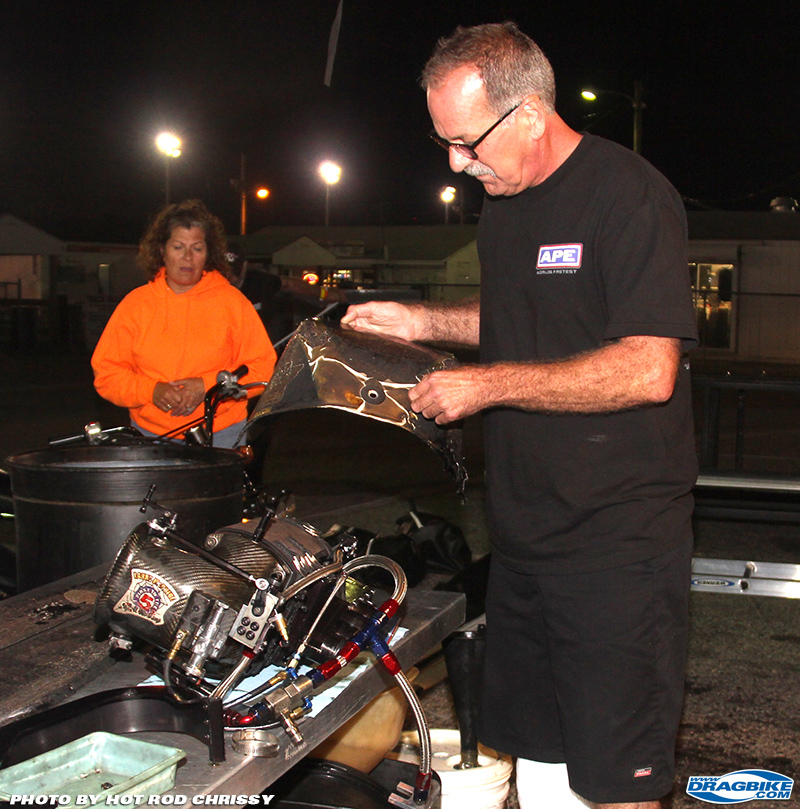 “It looked like a 100% loss,” he said. “The chassis was broken and bent, the engine was destroyed, the body was ruined, the computer and electronics were burned up.  The engine was literally sheared in half. In my 37 years of racing I have seen a lot of blown up motors but never one this bad.” 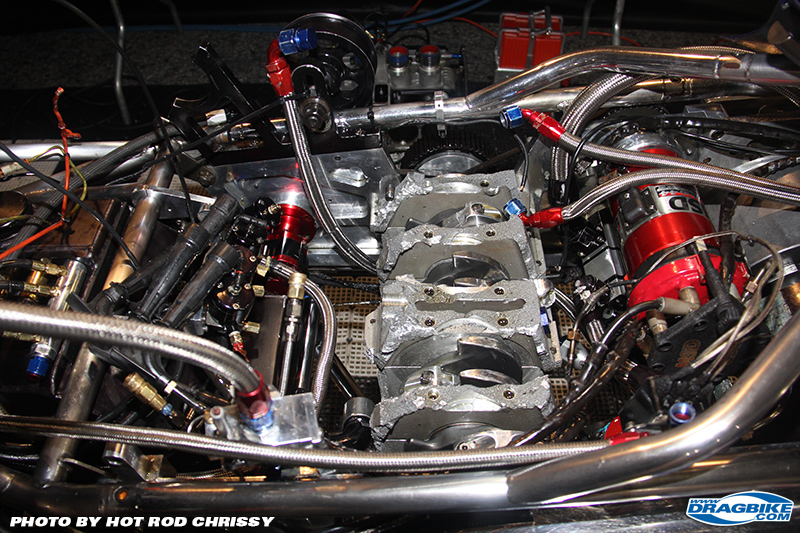 “When we got it home we decided to take a longer look at it.  We need to investigate and if everything thing is good my goal is to rebuild it and make one more pass on it. We have talked to several chassis builders and they generally agree that it was unlikely that the fire had weakened it to the point where it could not be run.  There are a few places where it is broken and bent but that can be repaired.” 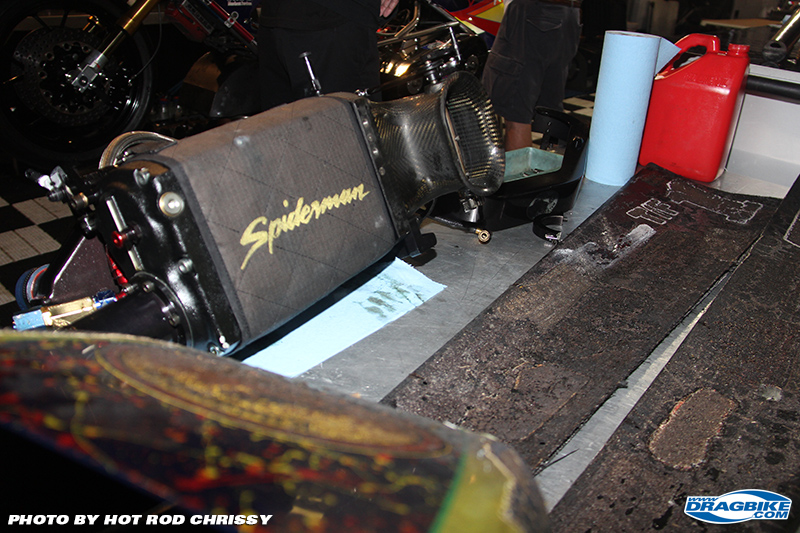 “We would like to take it to NASA [Langley Research Center] in Hampton VA and get them to check the metal to see if its been crystalized and to check the general integrity of the chassis.  It’s a lot of paperwork just to get it in there and I don’t know if we will be able to do it. 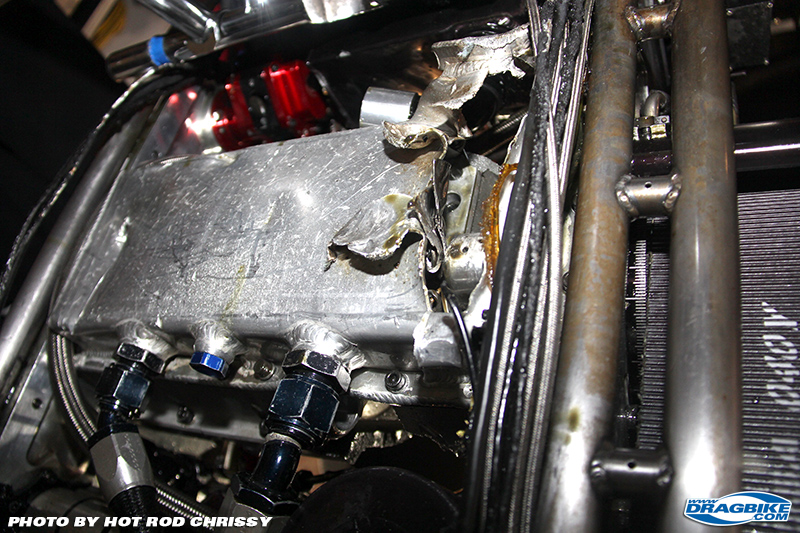 “Ultimately we would like to make one more lap on it so it didn’t go out in flames,” he said.

“Either way we are going to rebuild it and display it and eventually put it in a museum.  Everybody who donated will get their name put on the bike.” 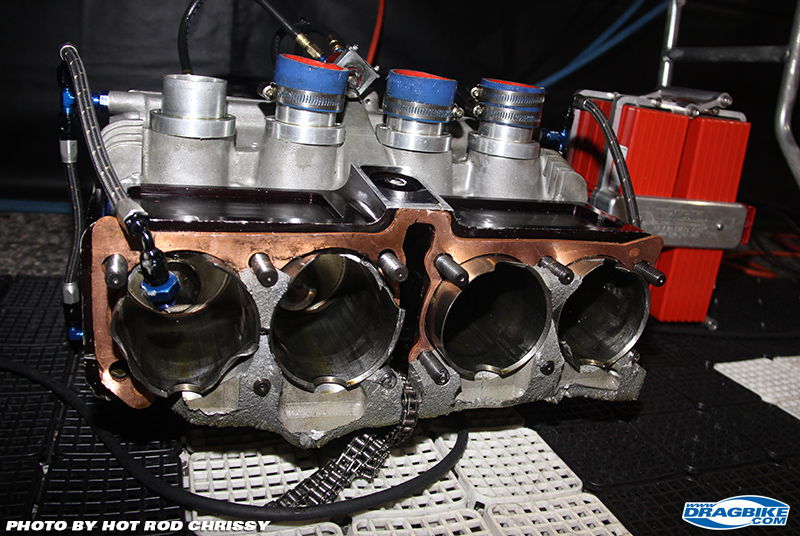 “It is practically ready, “ McBride said of the new bike.  “We just have a few things to do. It’s 95% complete. We actually fired it up four times.  After this last incident we are going to put more safety features on the new bike so it will take us a little longer to get it ready.  But if I am going to race I have to do it now.”

As for when it will be ready, McBride is giving no hard date. 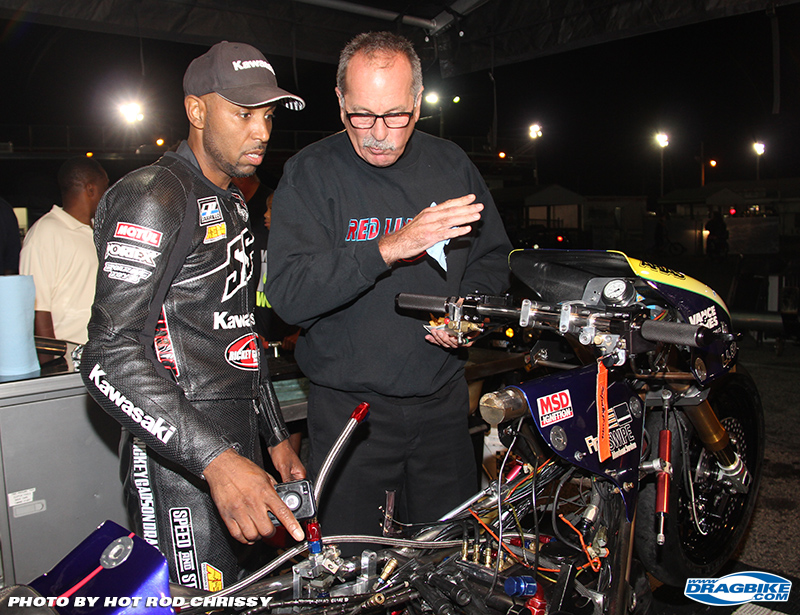 “I would like to go to the IDBL Finals but I don’t think I can be physically and mentally ready,” he said.  “The Man Cup finals is a possibility but I don’t want to do anything before I’m ready.”

Before we wrapped up McBride wanted to again thank the community that has been so supportive especially Jason Dunigan, Jason Miller, Dimey Eddinger for setting up the gofundme.com site which garnered over $20K in donations in conjunction with the social media efforts of Dragbike.com’s Brandi Neithamer.

“The support had been overwhelming,” he said. “I want to thank everyone that called or emailed or stopped by.  The motorcycle community has come together for me and it has been awesome. I can’t put in to words what it means to me. It is humbling”

As for coming back, no one would blame him for retiring after this latest incident but there is no keeping him down.

“I don’t have a death wish, motorcycle racing is just my passion,” he said. “I figured out that I am Spiderman and not Superman. But I am coming back.” 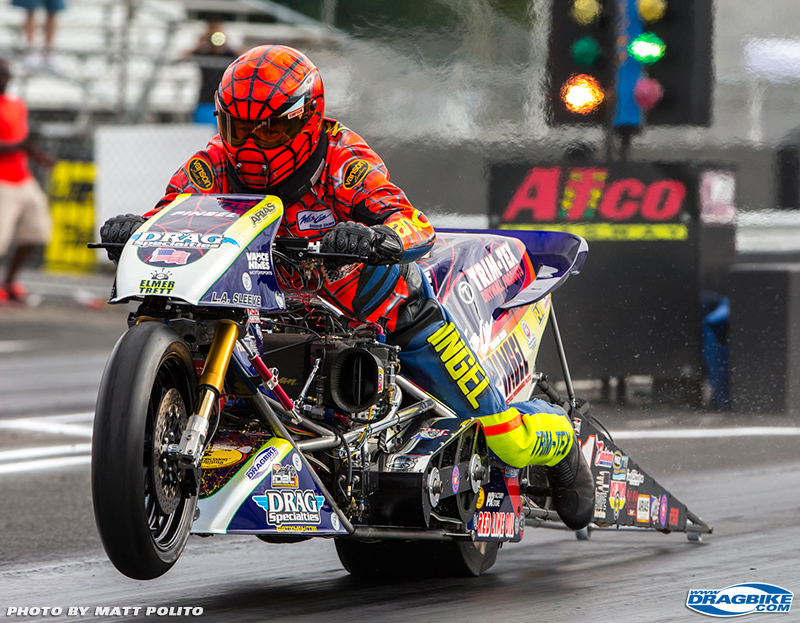