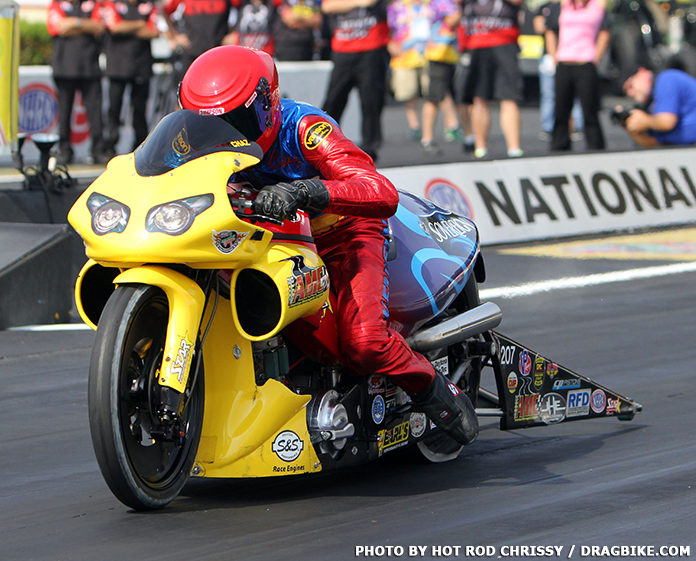 At first glance, Chaz Kennedy was nothing but smiles as he talked about making his first pass on a Pro Stock Motorcycle during last weekend’s Auto-Plus NHRA Nationals in Reading Pa. In reality, the 19 year old rookie was quite nervous about being the first rider to tackle the famed Maple Grove Raceway quarter-mile on a solo run. Kennedy acknowledged that the whole experience became very real as soon as they fired up his Sovereign/Star Buell.

Despite the butterflies, Kennedy is no stranger to racing as he already has three American Motorcycle Racers Association championships to his credit on a Harley V-Rod Destroyer, and was named the AMRA Racer of the year and AMRA Rookie of the year in 2011.

“I started racing when I was five years old on dirtbikes,” said Kennedy. “I raced [on dirt] until I was 15. My dad Chuck has won a couple of races and I always watched him race. I told him I wanted to drag race and when I was 15 they were doing a track day at Gainesville and one of his friend’s leathers happened to fit me. I jumped on his race bike and went down the track, and I’ve been doing it ever since.” 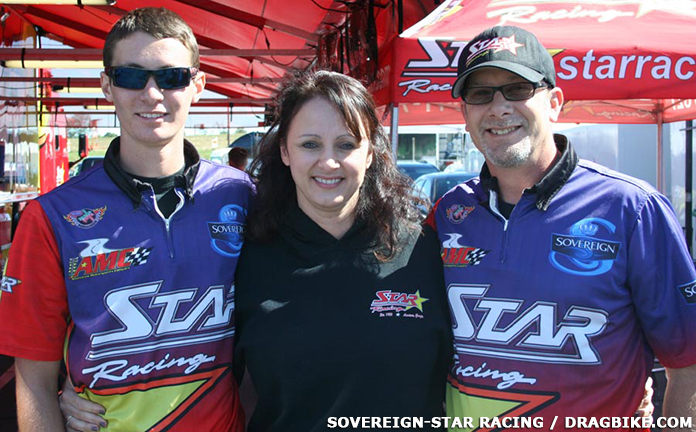 Chaz with his mother Peggy and father Chuck.

Following his early success, Kennedy has been on the radar screen of Star Racing owner George Bryce for the last several years and was added to the Sovereign/Star team as a development rider. Bryce, who has mentored his share of former Champions including John Myers and Angelle Sampey, was quick to recognize Kennedy’s natural riding ability and his calm demeanor.

“It’s great that he doesn’t have any bad racing habits,” said Bryce. “Hardly any at all because he started learning [the proper techniques] when he was brand new at racing bikes. His dad brought him to our school and he’s taken our class several times. We decided that he could possibly be a future racer for us so we put him on a development deal for 2013.” 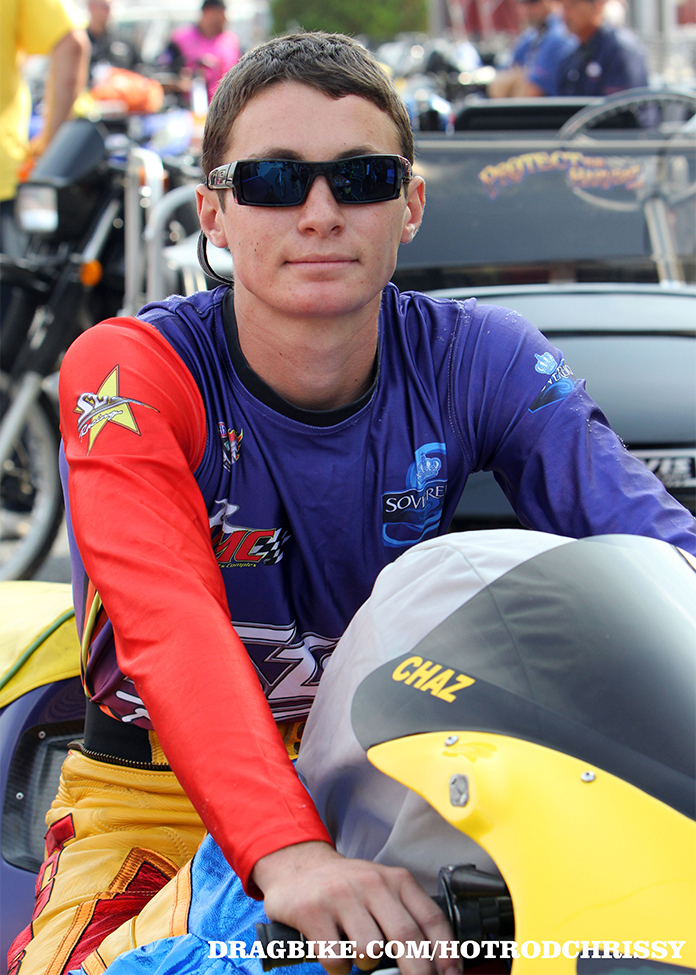 Bryce’s original plan was for Kennedy to race the team’s Suzuki at the final two events in Las Vegas and Pomona but that plan was changed following the unexpected departure of rider Scotty Pollacheck prior to the St. Louis event. With an open seat on one of his V-twins, Bryce elected to accelerate the time table and allow Kennedy to make his debut in Reading.

“After Scotty left us a couple weeks ago, we decided that we were just going to go out there and give it our best shot at Reading.” said Kennedy. “It really felt good to just jump on it and go. I was a little nervous because I had never ridden [a Buell] before and we really didn’t get an opportunity to test but everything went pretty well.”

Kennedy qualified 13th in his first NHRA debut which meant a first round match against championship points leader Matt Smith in first round. It presented the perfect opportunity for Kennedy to help his new teammate, Michael Ray, who is chasing Smith for the Championship but it didn’t work out as Kennedy fouled at the start and Smith went on to win his third event of the season. Still the rookie was hardly discouraged by his professional debut.

“I felt a lot better after I went through the finish line on my first pass,” Kennedy said. “I knew I could benefit from the experience and better myself every time to make me a better rider. I know that when we get to Las Vegas we will be turning better numbers and I’ll have better lights. Everything all around will work out a lot better.” 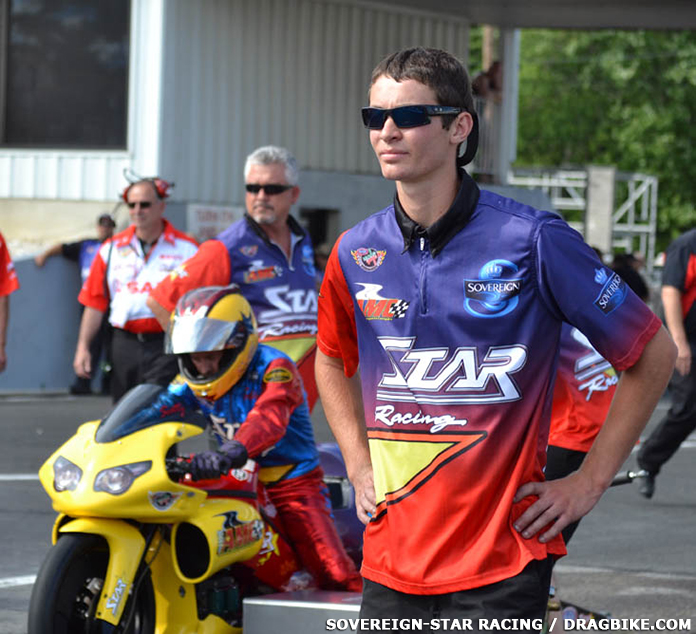 “My ultimate goal was to be the deal breaker and beat Matt in the first round but it just didn’t work out that way,” said Kennedy. “I was still trying to learn the new [NHRA] tree. Its different from what I’m used to and I just went a big red. He definitely got away with the points this week I really wanted to give Michael a shot to try to get number one. It just didn’t work in my favor. I did very well for my first time riding a Pro Stock Motorcycle. It was just an all-around good weekend for me.”

Bryce admitted that he was asking a lot of his youngest rider to throw him into NHRA’s premiere two-wheel class on short notice but he had nothing but praise for his performance thus far.

“I am hoping for him to pick up where he left off at the next race,” said Bryce. “He got better every run. He only got to make five runs and he did better than we thought he would. This is a pretty tough call to ask a 19 year old kid who had never ridden a six second bike before and jump out there in front of everybody at an NHRA national event to make a solo pass in front of everybody and he did really well.”

Kennedy was also impressed by teammate Ray, who figures to play a prominent role in his development for the balance of the 2013 season. 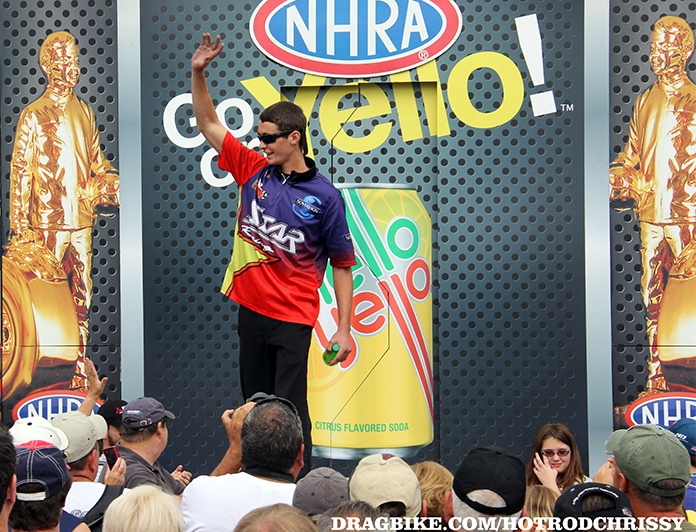 “Michael has been an awesome mentor to me to help me with anything I ask and he really talks me up a lot,” said Kennedy. “He thinks very highly of me and I really value his friendship and everything he has tried to help me with. He is just a really good guy all around I really appreciate it.”

When it comes to working with Bryce, Kennedy admits that he’s got big shoes to fill as the Sovereign/Star team has won national event titles with at least a half-dozen of the sports most successful riders. Bryce is well-known for his unique teaching methods but when it comes to advice, Kennedy is all ears.

“Its very good actually,” said Kennedy. “George is easy to work with. Personally I want him to critique me as much as possible because it drives me to be the best I can be all the time. You have to learn from your mistakes and make yourself a better rider every lap and focus on what you have to do.” 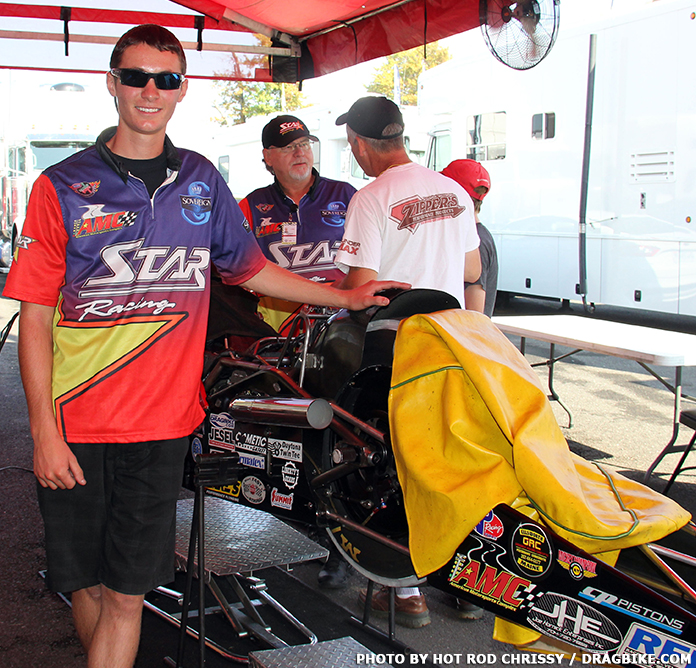 “You can tell Chaz was raised right,” Bryce added. “He is very respectful, he is a good worker, and he is learning everyday.”

With his debut out of the way, Kennedy can now focus on making better runs, and he believes the nervousness of his Reading debut is well behind him. For his second start in Las Vegas, Kennedy’s goals are short and sweet.

“To make better laps,” he said. “To make good straight fast passes and everything else will come along with that. That is all I can do.” 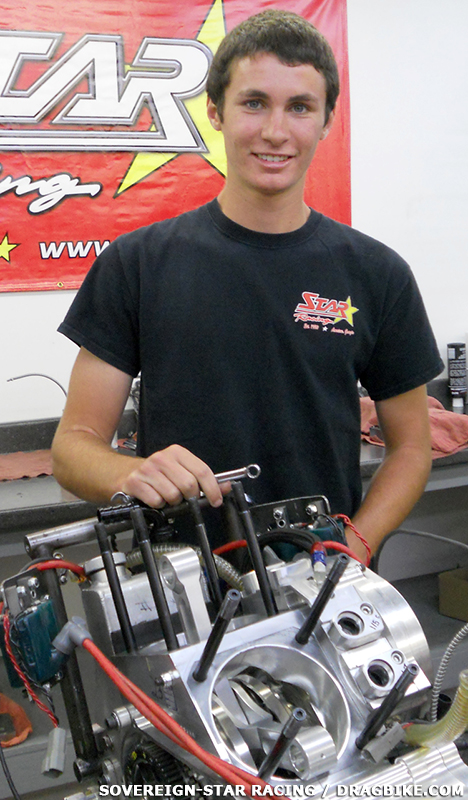 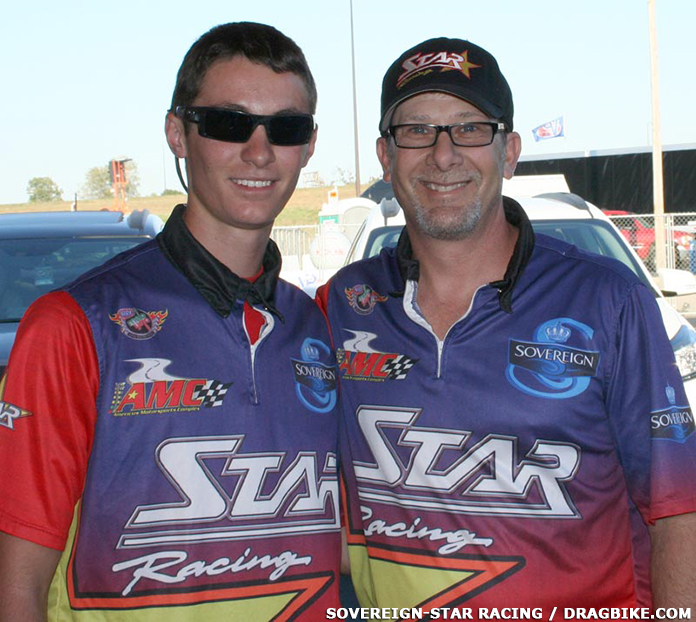 Chaz with his father Chuck 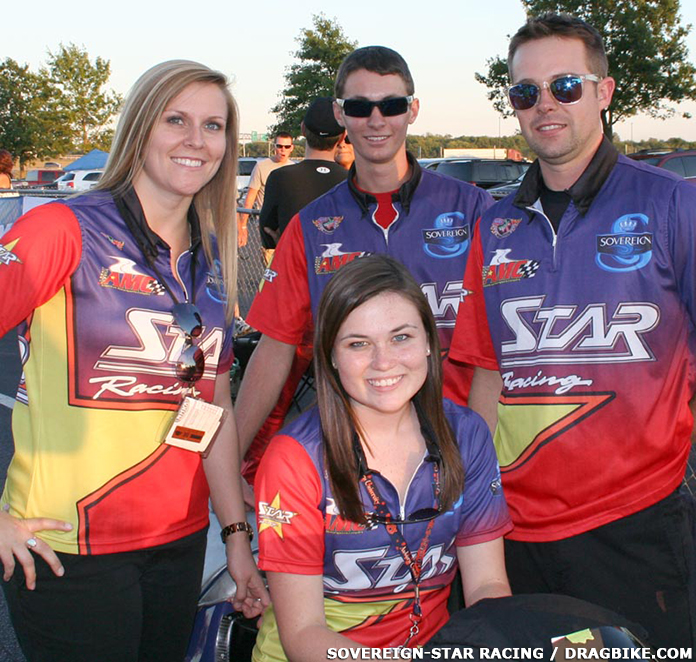 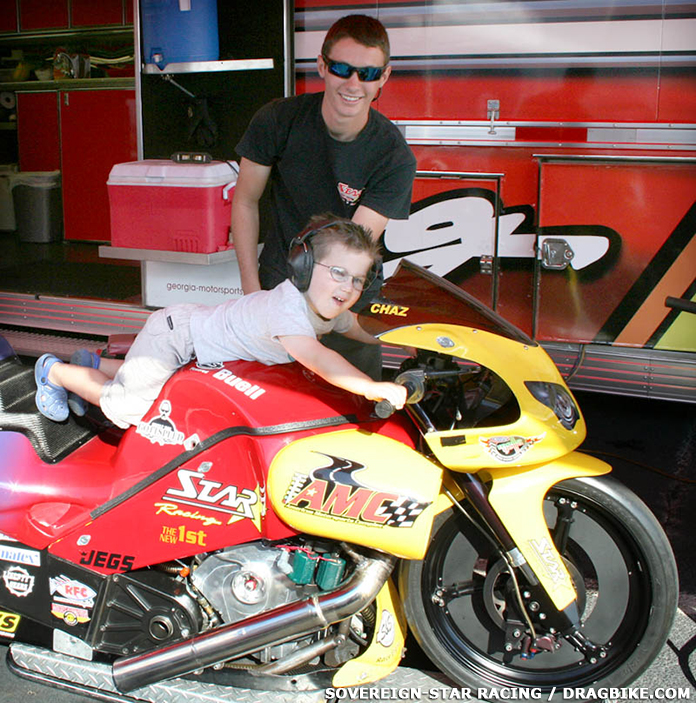 Looking Ahead: 2021 Motorcycle Drag Racing There is much to look forward to in the coming motorcycle drag racing season. There are no less than...
Read more