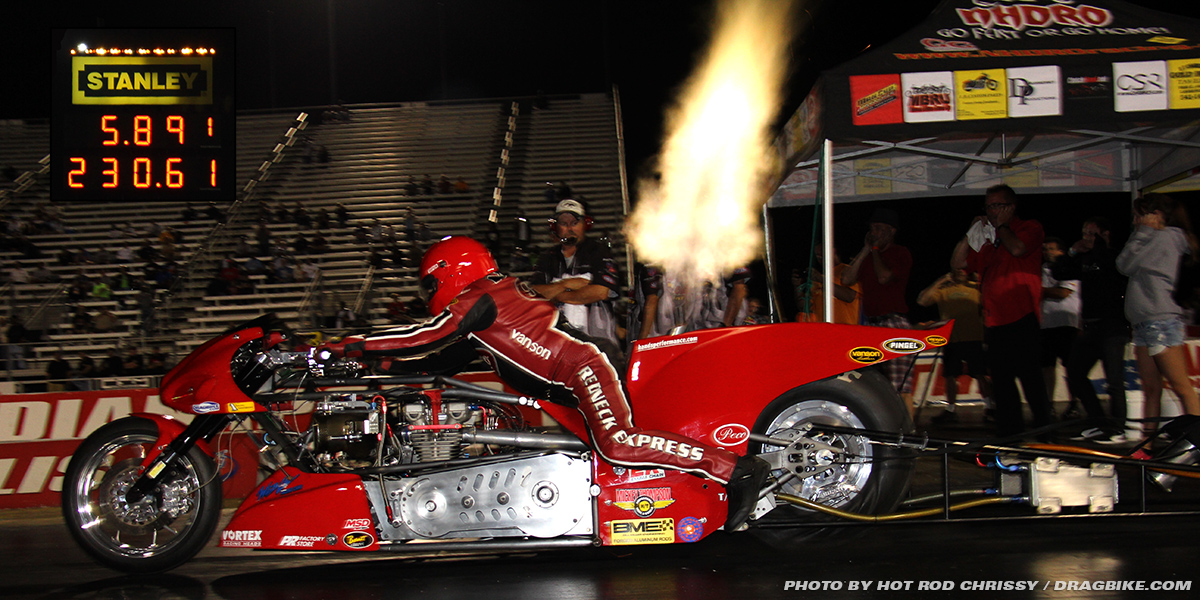 Being intimately involved with motorcycle drag racing for close to 25 years I’m a bit jaded. I’ve seen it all from the most thrilling of championships to the most devastating of tragedies. There are very few things that happen in the sport that make me upset that I wasn’t personally there to see.

Chris Hand making his first five-second run is on that very short list.

I read the news from the Man Cup/NHDRO Pingel Thunder Nationals at Indy and I got a chill. Chris Hand ran a five. And he didn’t just squeak into it, he smashed the barrier, recording a 5.89 at 230 mph all while shutting off at 1000 feet. Amazing.

Chris and Sharon Hand are universally loved in the community of motorcycle drag racing. Unassuming but with quick wit, Chris is one of the most approachable racers in the sport. He and Sharon put their heart and soul into their racing operation and to those of us that truly love the sport, they earned our admiration.

As drag racing classes mature they lose some of their soul. Rules start to dictate what can and can’t be done for the sake of “parity” and “close racing”.

“Close racing” is fine and all but the really compelling aspect of drag racing, what really gets a drag racer’s juices flowing, is ascending the mountain to the peak that is a performance barrier. Man and machine against the performance envelope.

For a Top Fuel Motorcycle racer, the Holy Grail is a five-second run.

Those who know Chris know that the five-second run is the thing that drove him the hardest. Sure he wanted to win races and, yeah, he wanted to beat Spiderman, but running a five was the top of his list.

The closest he came was a 6.041 second run in Gainesville in 2005. The clock was tripped just as he was coming off the bike in a horrifying moment. He survived the crash with minor injuries but an incident like that could end a career for an independent racer.

Not Chris Hand. He rebuilt and hit the track two years later. In 2008 he came close to his career best with another 6.04 and, as he would joke, this time he was actually riding the bike.

Then came years of frustration – financial setbacks as pretty new engines were blown up on the racetrack. In between there were miles of road and countless waffle restaurants. It took him five years and untold dollars to erase that last four hundredths of a second. If you asked him I bet he would say he wouldn’t have it any other way.

The long climb up the mountain makes reaching the peak so much sweeter.

Although I wasn’t there to see it, his accomplishment moved me from clear across the country.

I send out the most heartfelt congratulations to Chris, Sharon and the rest of the crew.

If you see him tell him I will be waiting at the Waffle King in New Jersey. I’ll give him a big hug when I see him.