Friday March 24, was our third test session before the 2017 Kings of Grudge event. First pass, the bike stayed on the ground and fifty-feet in front of the finish line. The bike wheelies and cracks a weld on the sub frame. BJ Humphries (builder/tuner), Joe Weindel (owner) and I quickly disassembled all the wiring and components. Then took the sub frame to a welder about thirty-five minutes away from the track. Joe Weindel drops his head, and I told him, “Sometimes it takes things like this to happen in order to make it to the winner circle.” Roughly an hour later BJ pulls up in our pit area with the sub-frame welded, ready to go back on the Red Bull bike. I suited up and we are back in the staging lanes ready to make pass number two. The bike laid down the sixty-foot time that we’ve been looking for. No wheelies and Red Bull stayed straight down the track like a bullet. From that moment I knew that we were going to be in the finals for the Big 8 race come race day. We made three more consistent passes after the first two. 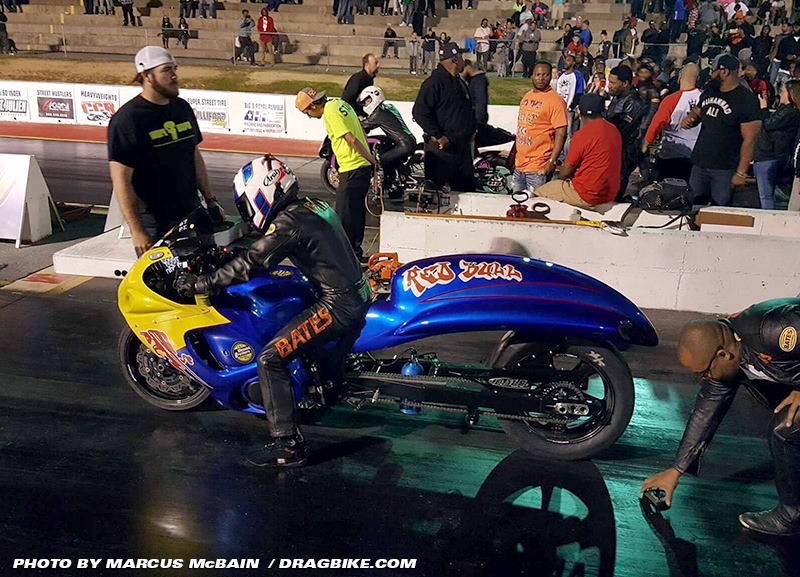 The bike was dialed in and Joe was ready to put the new body work on the Red Bull bike. Leaving the track about 12:00am. Everything that was on my mind far as a new bike, new rider, new team, Big race, home track, and my family was coming to show support. I told myself this was what you always dreamed of. The crowd, cameras, bright lights and the big stage. Waking up the next morning the word consistency popped in my head. I knew that as the rider if I remained consistent the bike would do the same. Saturday first pass off the trailer was our best pass by far. Second pass on Red Bull then became better than the first pass. From those first two passes I knew we were ready for round one. Track conditions were perfect, bike remained consistent as well. Before the race I watched and lined up my father Russ Fair who was racing his 2014 ZX-14R in Street E.T. From not racing a whole year he still looked like he never missed a beat. Also he won his second Street E.T. race considering he won a week ago at Carolina drag way.

Here we go round 1 Big 8 to the water box. Had to run my Florida buddy John Fernandez. I knew I had to cut a good light against him and stay out in front. Light’s drop, and again Red Bull made a clean pass then came on the win light. After making it back to the pits. Before my race, I watched my teammate Chris Moore go down to Billy Vose on that fast Ellameen Bike. Chris told me “man make sure you leave first”. No pressure, as Rasheem Clark Called Red Bull to the staging lanes for the final round. We rolled down and flip for lane choice. We lost and had to take the left lane. 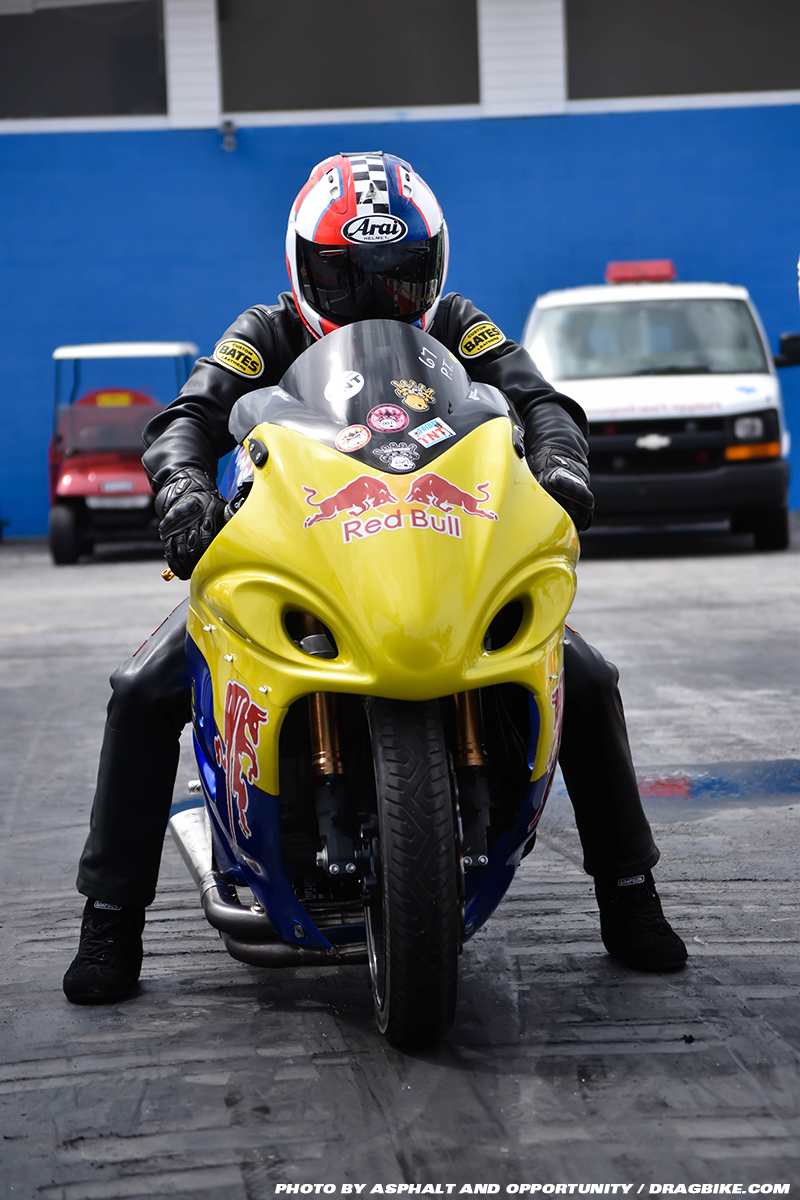 Only thing on my mind at moment was making sure we had the bike lined up straight. After the crowd made the track clear. Burnouts were made and I pulled up to the line. I could feel the crowd and every one around me watching. A rookie in his first Big 8 Final against a legend. BJ Humphries spurge the nitrous then patted me on the back. I rolled in, the lights dropped. For the people online that were not there at the race, Billy and I left together. 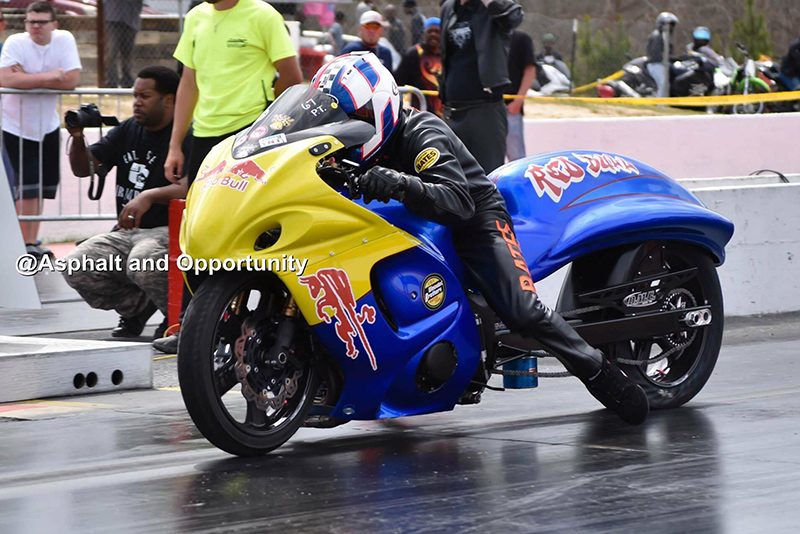 Red Bull stayed straight and there goes my win light. My mind was blank on what just happened. As my teammate pushed me down the return road, I started crying tears of joy. My teammates were cheering for me. I sat on the bike with my helmet on as if I lost the race. But that wasn’t the case. I won the race, my first Big 8 race. Joe Weindel and I kept talking all week from the first time I ever rode the bike that winning the first race would be a good start for our team. Never in life will I forget that moment, winning my first Big 8 race. 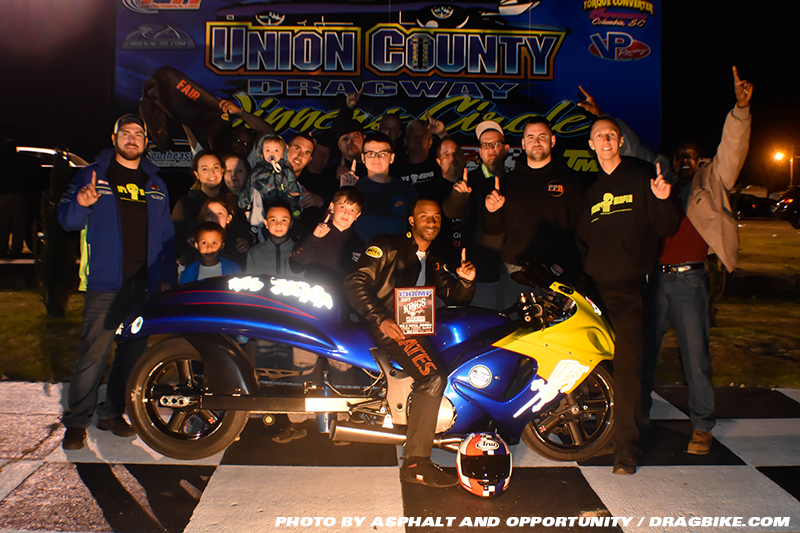 To my team Chris Moore, BJ Humphries, Joe Weindel, Anthony Weindel, Lance Weindel, Moore Mafia Family, and the Weindel Family. Thank you for choosing me and having faith in me for riding Red Bull. I’m truly humbled! For my father Russ Fair and myself. It was also our first time ever in the winner circle together as father & son. Thanks Asphalt and Opportunity, and Johnny Mapp/Bike Papaparazzi for the amazing pictures and footage you guys take. To our sponsors Bates Leathers, DME Racing, RC Performance, LLC, Montgomery Motorsports, RPS Manufacturing, & Moore Mafia. 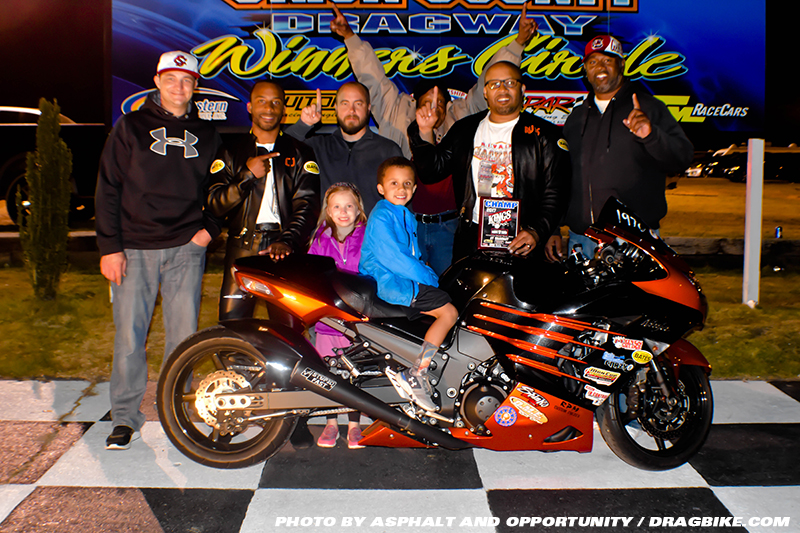