Henault Takes Second but Holds on to Super Street Lead

This season I am competing for my second year in “Super Street” which is a category where street bikes with limited modifications race in a heads up format.  The motorcycles in this category are required to run a street legal dot tire, can run power adders, are limited on electronic controls, as well as length based on rider weight. 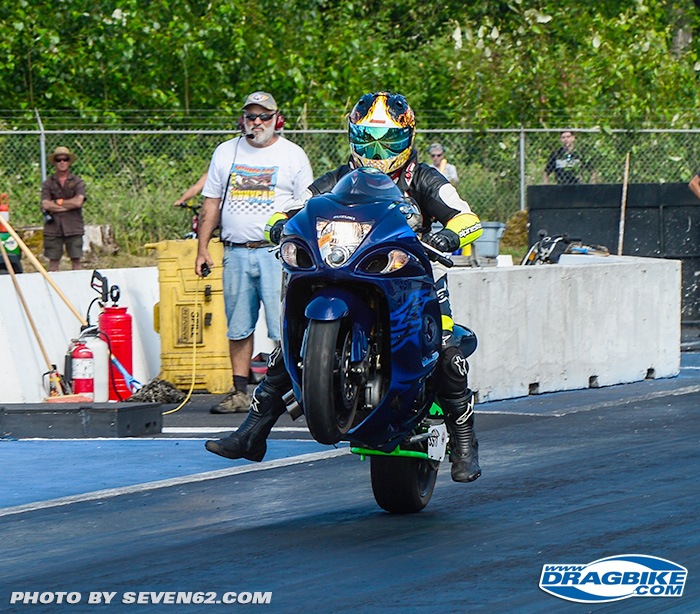 Precluding this event I began the season strong by qualifying 1st place, and then winning the first national series event in Medicine Hat, Alberta.  As this is my second year competing in Super Street, I did very minor modifications to the motorcycle over the winter time as I am still learning this setup.  After the event in Medicine Hat it was evident that I needed to push the bike harder as it seemed that I was overworking the clutch and not pushing enough power to the bike.  Also, the other competitors are capable of running just as fast as I did, so I wanted to try and push the limit of my motorcycle and myself.  I decided to increase the boost on the bike prior to showing up for Mission, BC.  During my first test and tune session, I felt there was something wrong with my pass.  I could even tell there was something wrong even when I did my burnout as the bike seemed to struggle to do a burnout.  When I pulled data, it was clear that the tune in the bike was running so rich, that I was barely keeping the bike running as my air/fuel gauge was completely bottomed out as soon as boost would log on the MAP sensor.  For the rest of the test and tune session I was pulling fuel after each run and I could feel and see that the bike was waking up and running stronger.  My MPH was climbing and my 1/4 mile time was decreasing.  This was also groundbreaking for me, as my previous tune was set perfect and no tuning was needed, so I was getting into the brains of the bike for the first time and really adjusting controls to optimize the performance of my machine.  At first I was struggling with this, as the bike seemed slow and it was frustrating, however once it started running better, my confidence came back.

Once qualifying came, I decided to run with what I had set up, which was far from where I want it as I’m just barely getting data on my A/F data.  On my second pass I ended up running my personal best of 8.92s at 161.78mph!  This qualified me in first place for eliminations the next day. 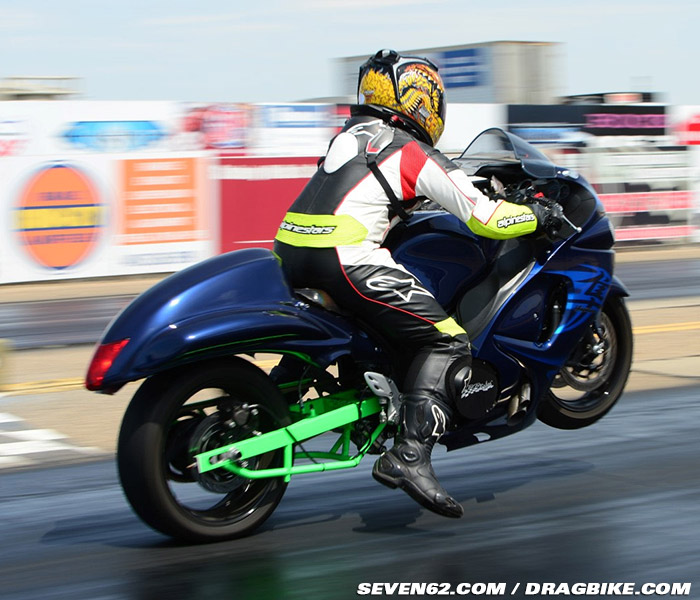 The next day was a completely different story for me.  The entire day I struggled with my 60′, and trying to keep the front end down.  The previous day, I was doing really decent with  my 60′ and the wheelies were none existent.  It was very frustrating and I ran all of my test sessions with the same setup trying to correct what I was doing wrong with my launches.  Going into eliminations, I had the benefit of having a by in the first round, which I used as a test session as well running a 9.09s.  Second round, my competitor pulled ahead of me at the launch, but I was able to reel him in at the top end.   Onto the finals.  As soon as the race began, the race was over for me.  I launched the bike way too hard, and ended up in a wheelie very high and climbing fast.  I tried shifting through the wheelie, however it was climbing too hard so I had to chop the throttle.  When I came down, I had actually drifted towards the centre of the track, out of the groove, close the the sensors.  I though about throttling back into it, however I looked at where my competitor was ahead of me and the possibility of me catching him, as well as my location on the track for grip.  It was then I thought I would be risking myself or my machine to try and get back on it, so I repositioned back into the groove and accelerated to finish the run.  Hats off to my competitor as he was running strong all weekend and had himself and his motorcycle in tune for that run.  I placed Second with a very large smile on my face as I love the sport and the people involved in it.  I am also still currently the points leader in the 2015 National Series for Super Street.  This event has brought to me immense learnings and a drive to do better.  I will return to the next event stronger, faster, and more consistent.

I would like to thank H Racing, my wife Victoria Henault, and all of my family for supporting me in this venture.  Victoria has been a huge part in the success of setting up the race season and ensuring that I am prepared for my events.

I would also like to thank my sponsors Functionally Fit CrossFit for ensuring I am in peak physical shape for my events.

The next event for the 2015 National Series is located in Edmonton, Alberta Canada for the Oil City Nationals on July 25th and 26th.

See you at the Track
-Gary Henault