Russ Collins Jr and David Collins have teamed up with Jerry Cooper of Cooper Performance in Byron, Ga to help bring the past into the future. Russ has been shipping pieces of his father’s famous Atchison, Topeka, Santa Fe, triple engine Honda Top Fuel bike to veteran Jerry Cooper for final assembly. “The Triple” as it is sometimes affectionately known, is a fuel injected nitromethane-burning Top Fuel Honda motorcycle with 3 vintage 1970-ish highly modified 750ccSOHC motors, hot-rodded to the max at about 1000cc’s each. 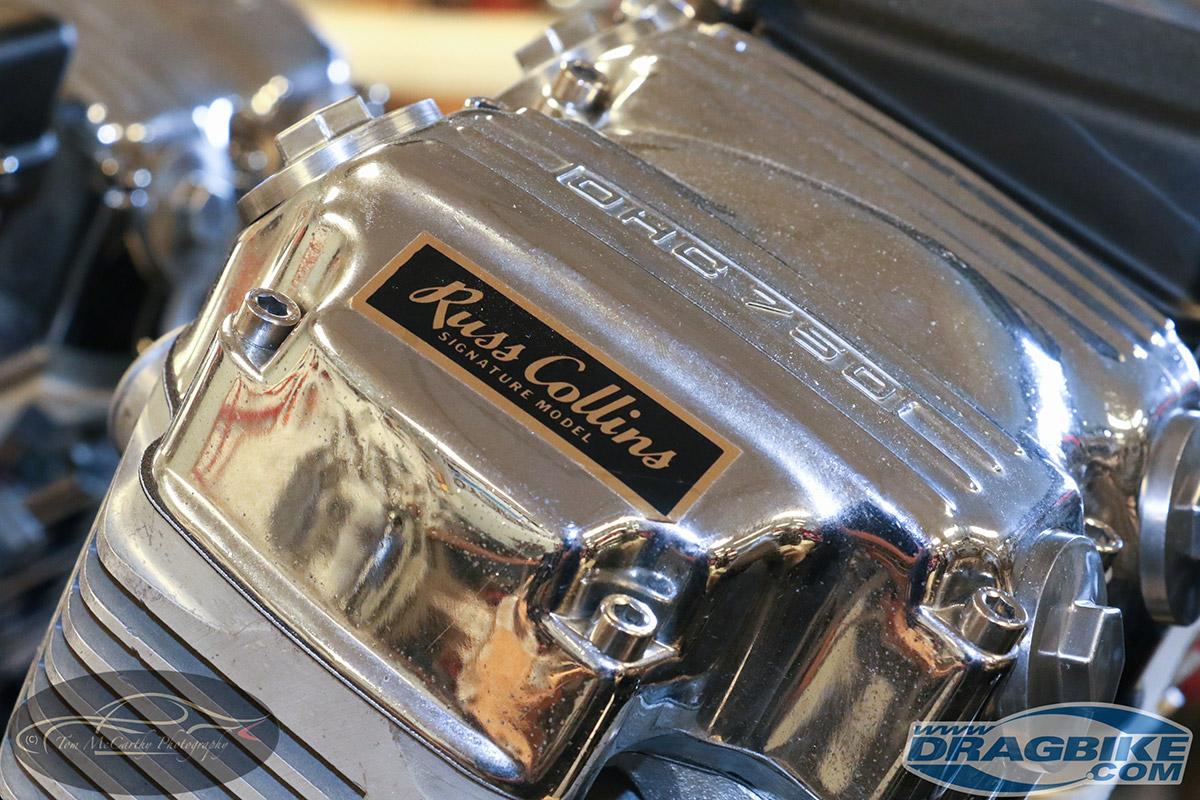 That’s 12 cylinders of fuel injected mayhem awaiting the twist of a throttle!

In 1973 Russ Collins and his staff at RC Engineering created the triple as their entry into Top Fuel motorcycle drag racing. This bike was state-of-the-art and was seen in most every motorcycle magazine coast to coast during the mid 1970’s. Right up until 1976 when Russ crashed the Triple in Ohio and was hospitalized. Then during his 9 months of recovery, starting from his hospital bed, Russ and his shop lead man Byron Hines, began designing and building his next Top Fuel motorcycle: the Sorcerer. 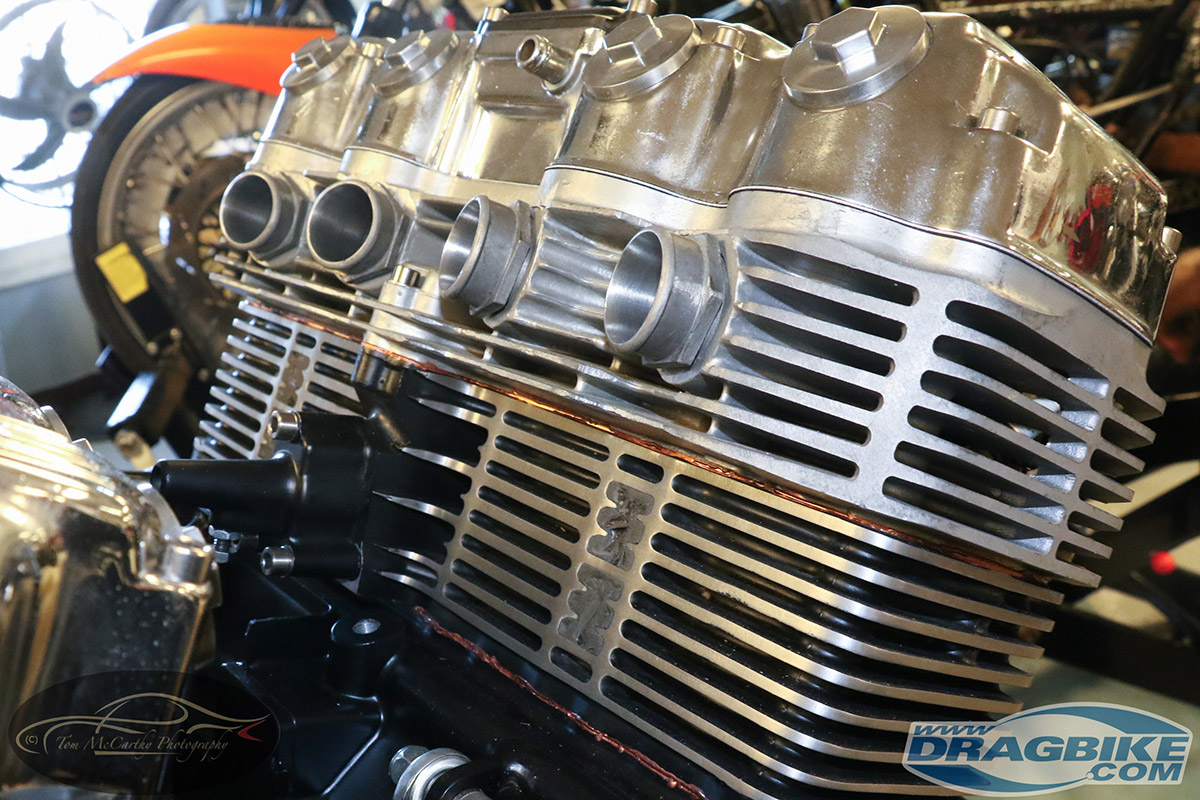 The Atchison, Topeka, Santa Fe, or Triple if you prefer, was never repaired after that terrible crash. In 2012, two years before his passing in May of 2014, Russ Collins gave his blessings to his sons, Russ Collins Jr. and David Collins, to bring the bike back to life. And not only did Russ give the ATS repairs a green light, but he also gave his blessings to the restoration of the legendary Sorcerer, the first bike to go 199.55 mph in the modern era. It was so close, but so far from the 200 mph mark, but get this: RC Engineering accomplished this in 1978! 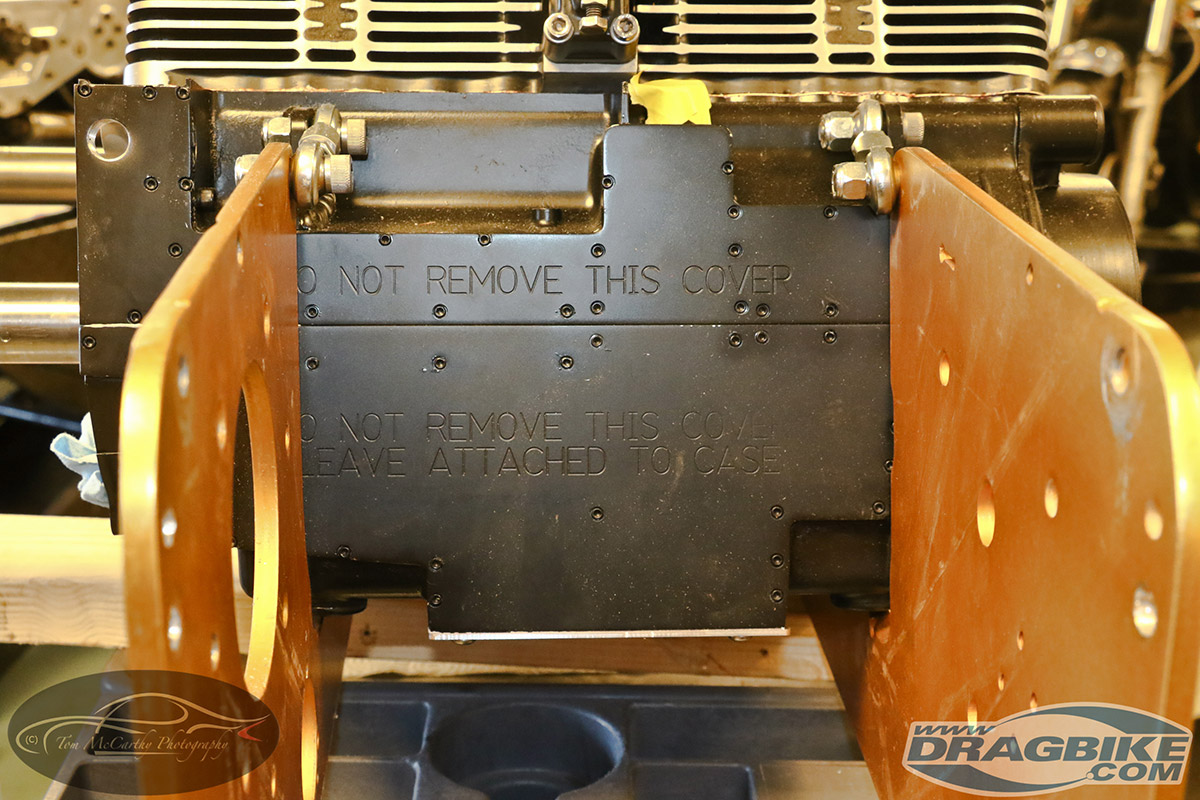 Now in 2019, after years of having the broken components sourced, fixed and replaced, the final assembly of the two historic drag bikes are well underway. Jerry Cooper in collaboration with the Collins brothers and a supporting cast of all-star-talent are restoring both The Triple and The Sorcerer. Both bikes are well along in their full restorations…with final assembly and tuning scheduled this summer and fall. 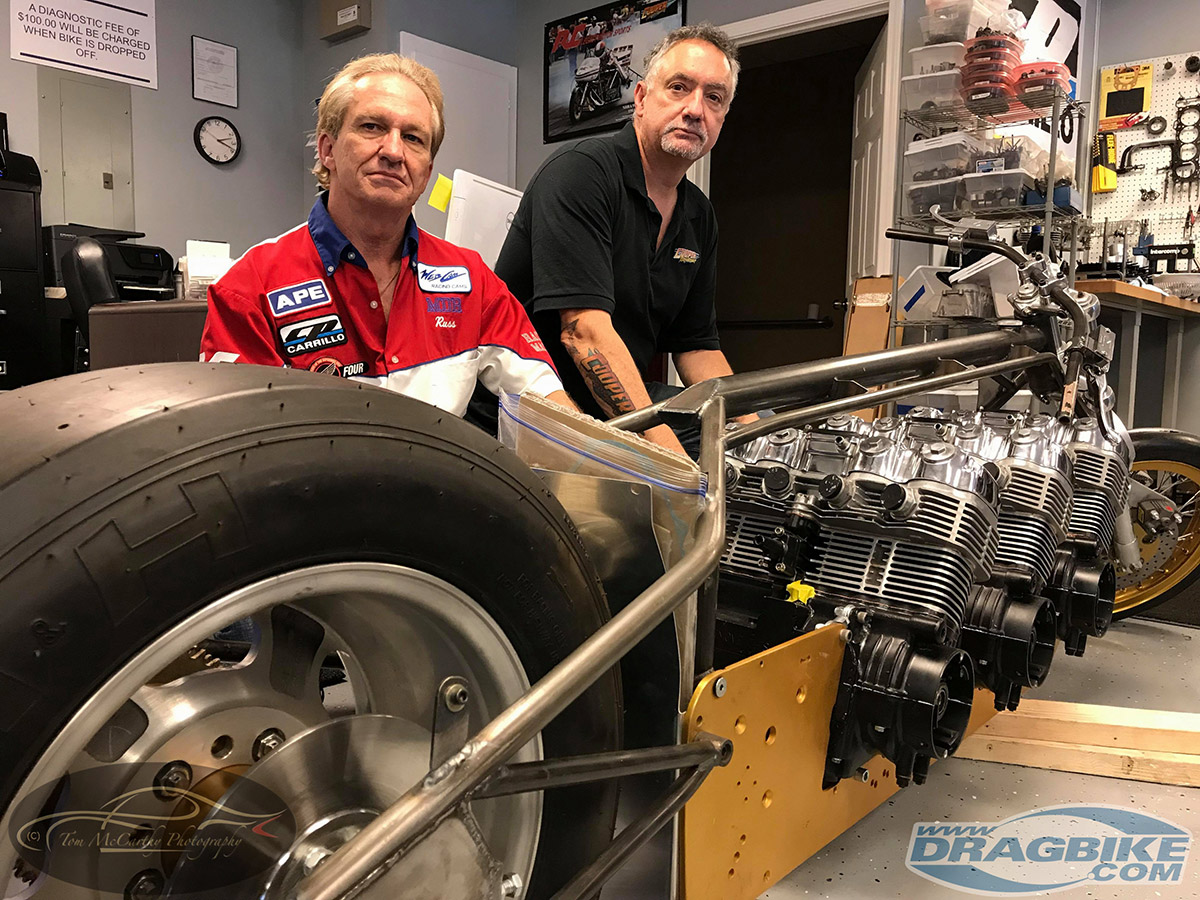 The hope is to get at least the triple done in 2019 and have it fire up at one of the biggest motorcycle drag races of the year, so that many racers and fans, worldwide can view and participate in the resurrections of these two historic motorcycles.

The Collins brothers have a substantial investment in this restoration project, now in its 6th year. Additional sponsorship from potential marketing partners will be welcomed and sought…in this final push. 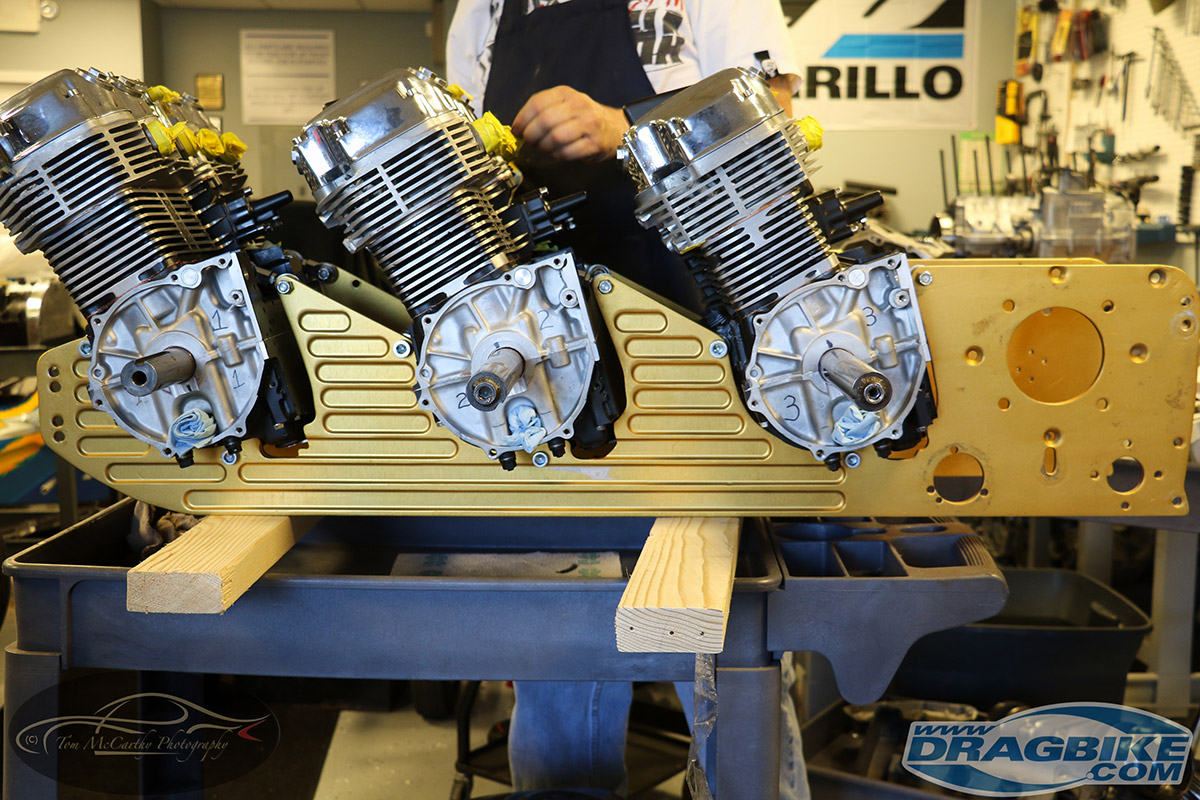 To support the rollout of these titans, a custom 40’ trailer was purchased to house them for transportation to events nationwide. This way, when motorcycle drag racing luminaries from all across the globe come to America, as they often do to races, they can not only see the world’s fastest and quickest drag bikes: but some of the most historic machines ever made as well.

Russ Collins Jr., in a recent interview commented this about having Jerry Cooper in on the final assembly, “Our first contact with Jerry was on the build of David Collins new Top Gas bike….after visiting his shop it became quite evident that this guy could build and tune just about anything. It wasn’t long before we were shipping everything we had to Georgia.” 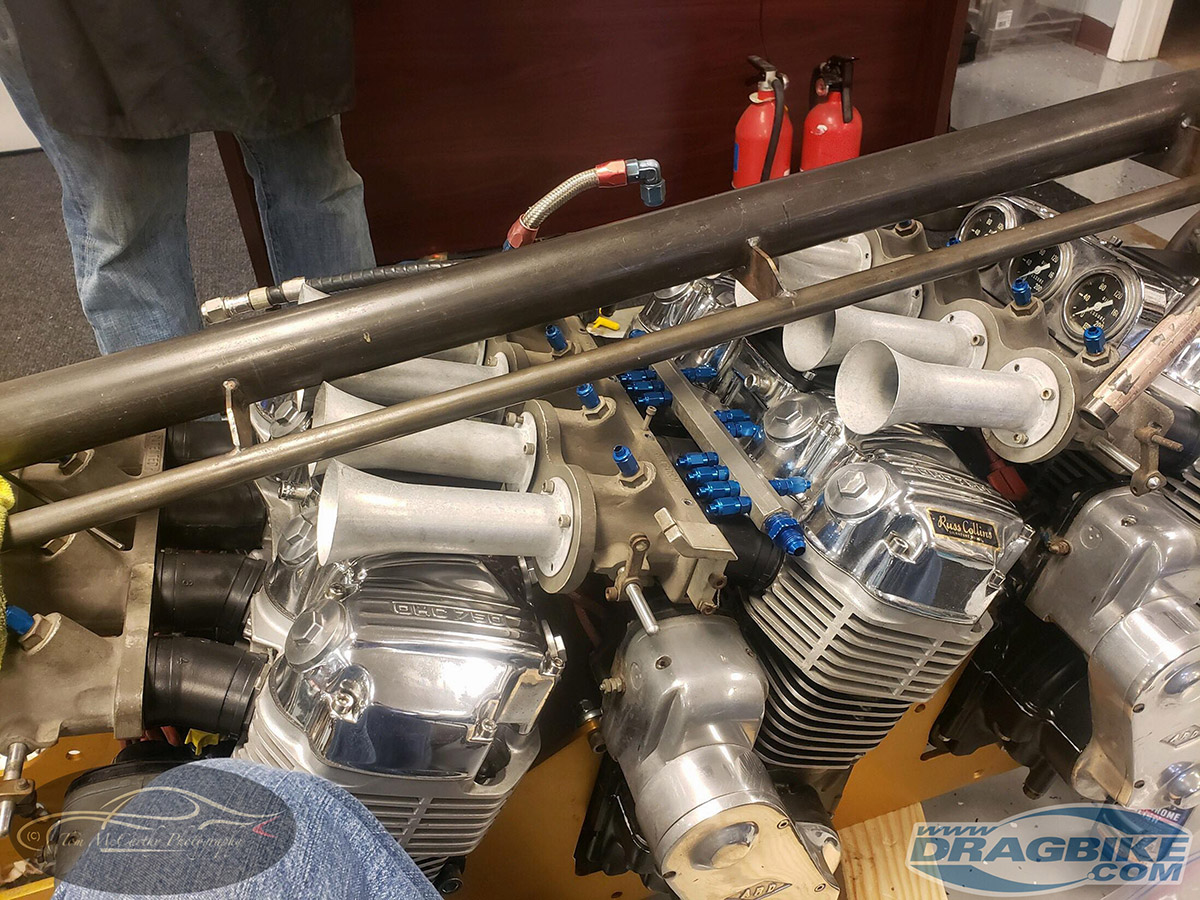 Jerry Cooper commented, “It’s quite an honor and a privilege to be chosen to play a role in the restoration of such a historic motorcycle. I am grateful for the opportunity to be a part of this. I’ve been doing this a long time and I remember as a kid, working on my drag bike, dreaming of having parts from RC Engineering to install in my own bike! I am thankful to the Collins family for allowing me to play some small role in this project.” 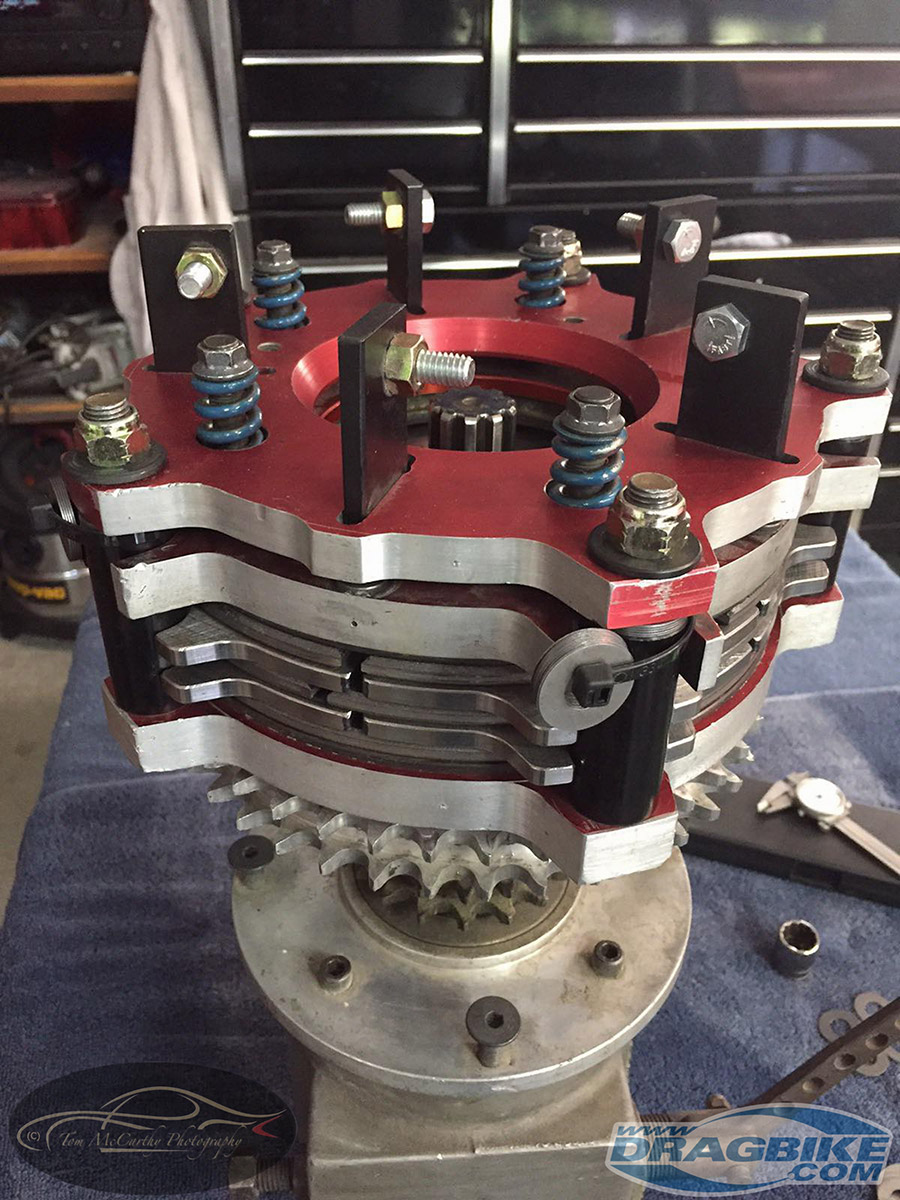 Jerry Cooper, of Byron, GA has been involved with nitromethane based drag bikes since the 1980’s. Jerry was deeply involved with the efforts of 7x Top Fuel motorcycle champion Tony Lang during Tony’s decade long efforts in the 1990’s, well into the New Millennium. 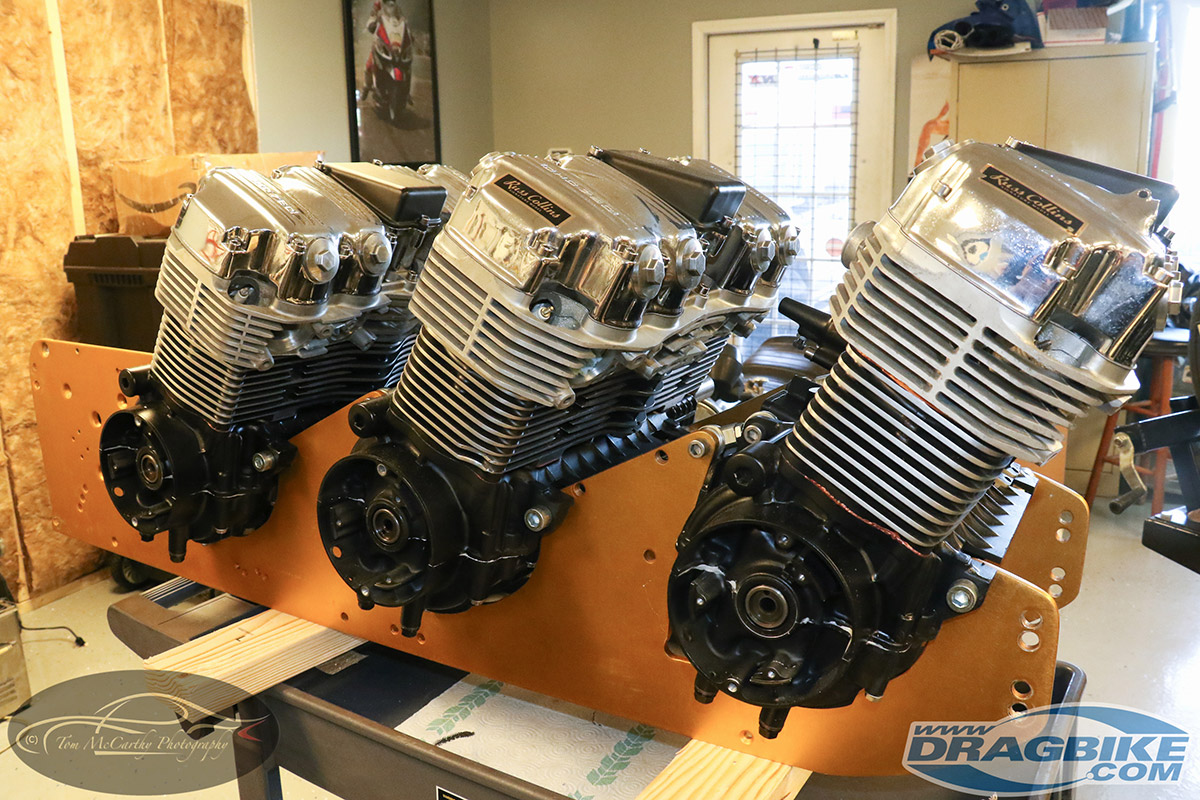 Anyone wishing to assist or see a marketing opportunity with the restoration of these famous drag bikes, please contact Russ Collins Jr via Facebook. The Collins brothers are doing everything they can to properly, fully restore – period correct – both of these old masterpieces of Top Fuel motorcycle drag racing history.

In total, with both bikes, there are 20 cylinders of nitromethane burning history here about to be unleashed… 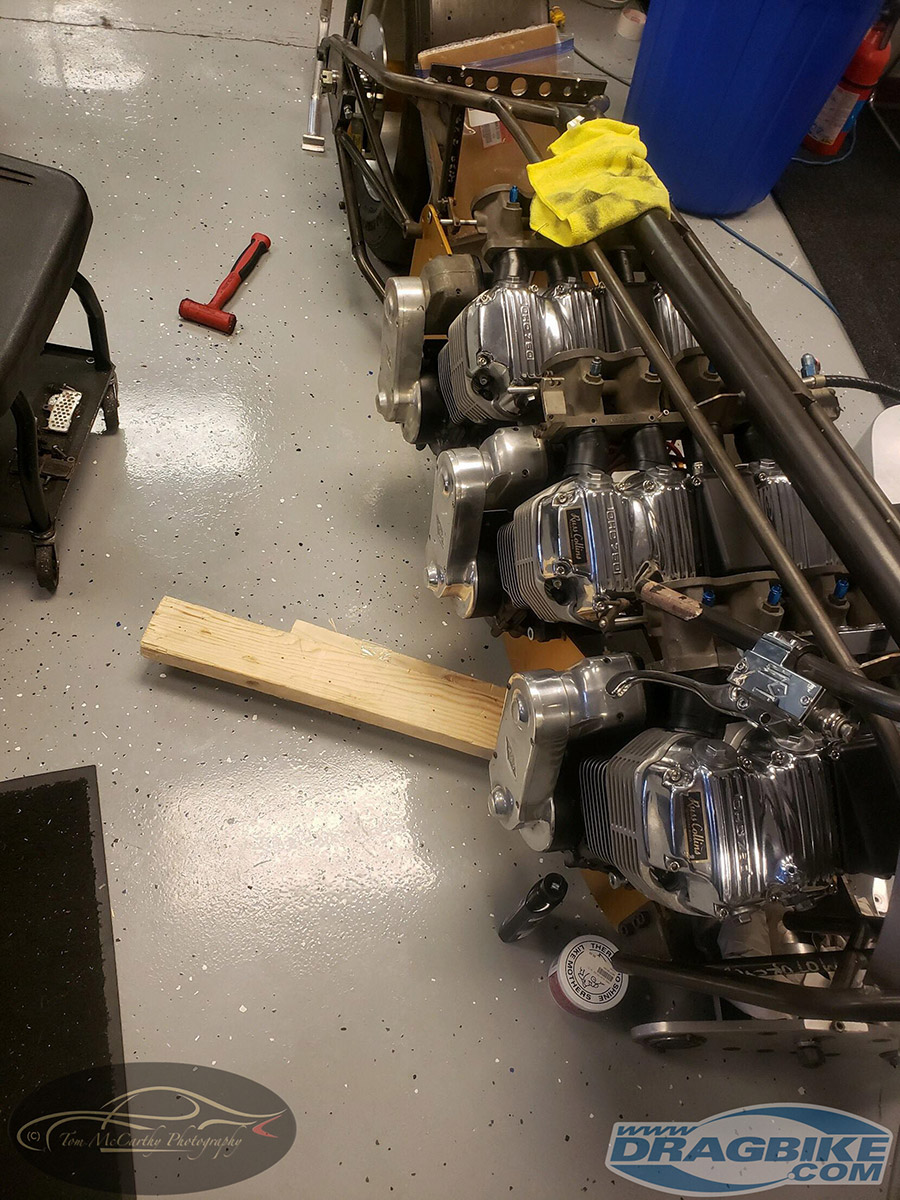