Damian Martini, of Melbourne, Australia, a drag bike pilot of many years, is set to debut his new Top Fuel motorcycle during the 2020 racing season. “This motorcycle has been in the works for quite some time now and we are ready to get down to business” he recently commented. “It’s been a long time coming but we were able to get in a test session last year to do a systems function check and all systems are a go!” 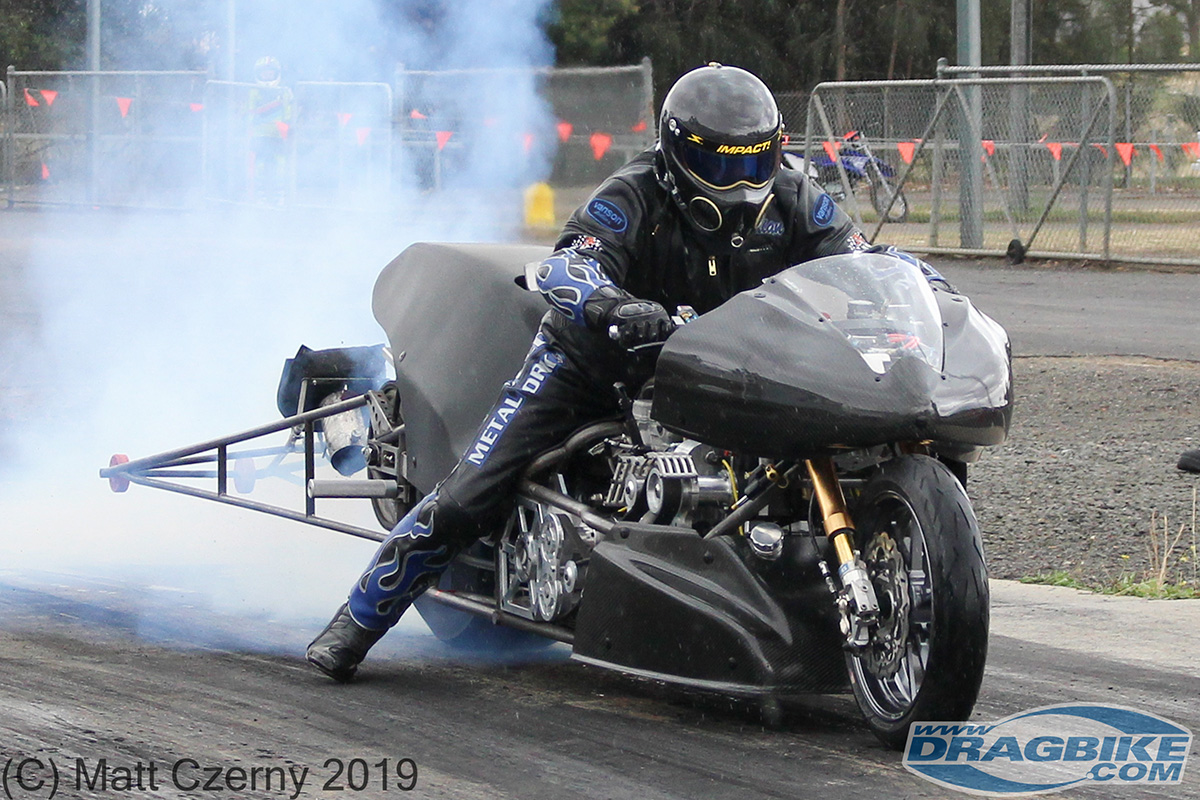 “We tested as a first outing at Heathcote Park and we were right pleased that everything worked correctly straight away. I can’t thank John & Chris Alwine enough for their help, they were instrumental in getting us started with the initial tune-up. I know I have much to learn about these bikes, we all have to start somewhere and well, here we are, up and running.” 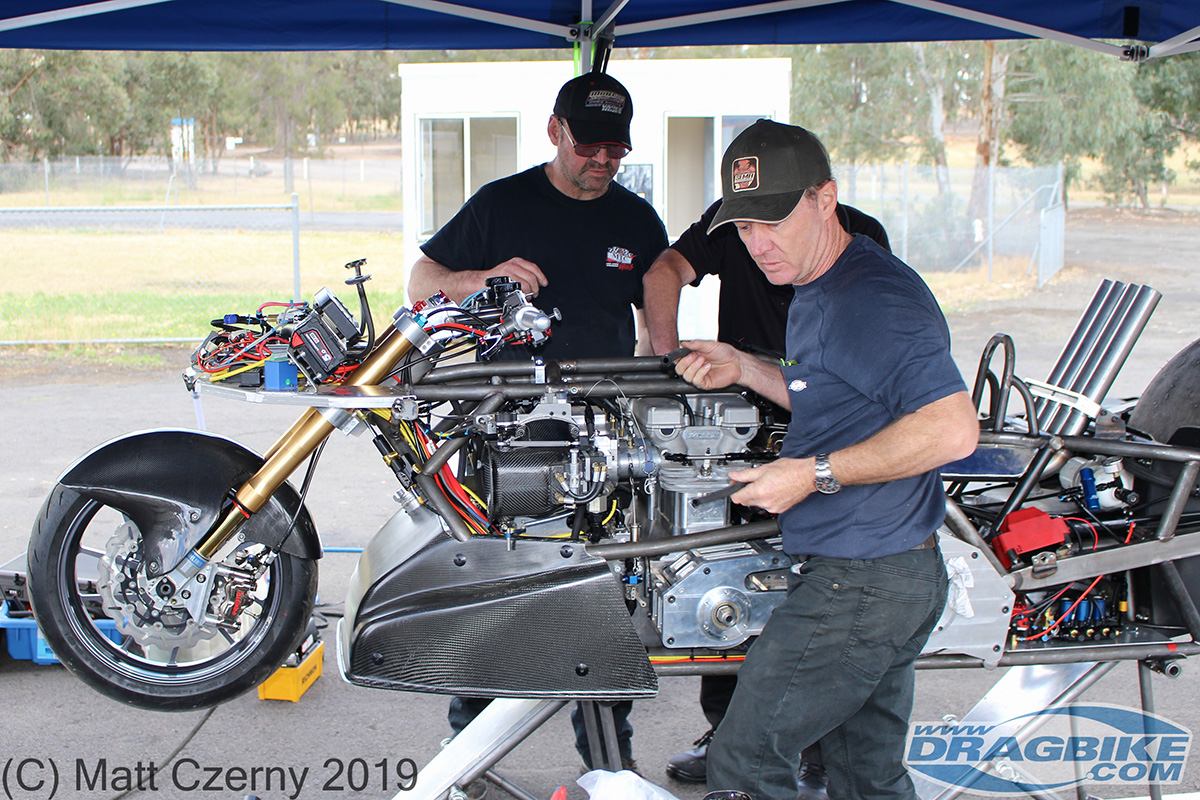 The new machine has a 1500cc Puma power source feeding a 2 speed Owens transmission sending the horsepower to an MTC Clutch set-up. The 102-inch chassis is a Sam Wills, Innovative Frameworks creation. This chassis was built the same time his current Top Fuel chassis was built.  The fuel system sports a Waterman pump and an MSD 44 Pro Mag with a grid controller. Once the team ventures out into competition they will have two motors with them ready to go. 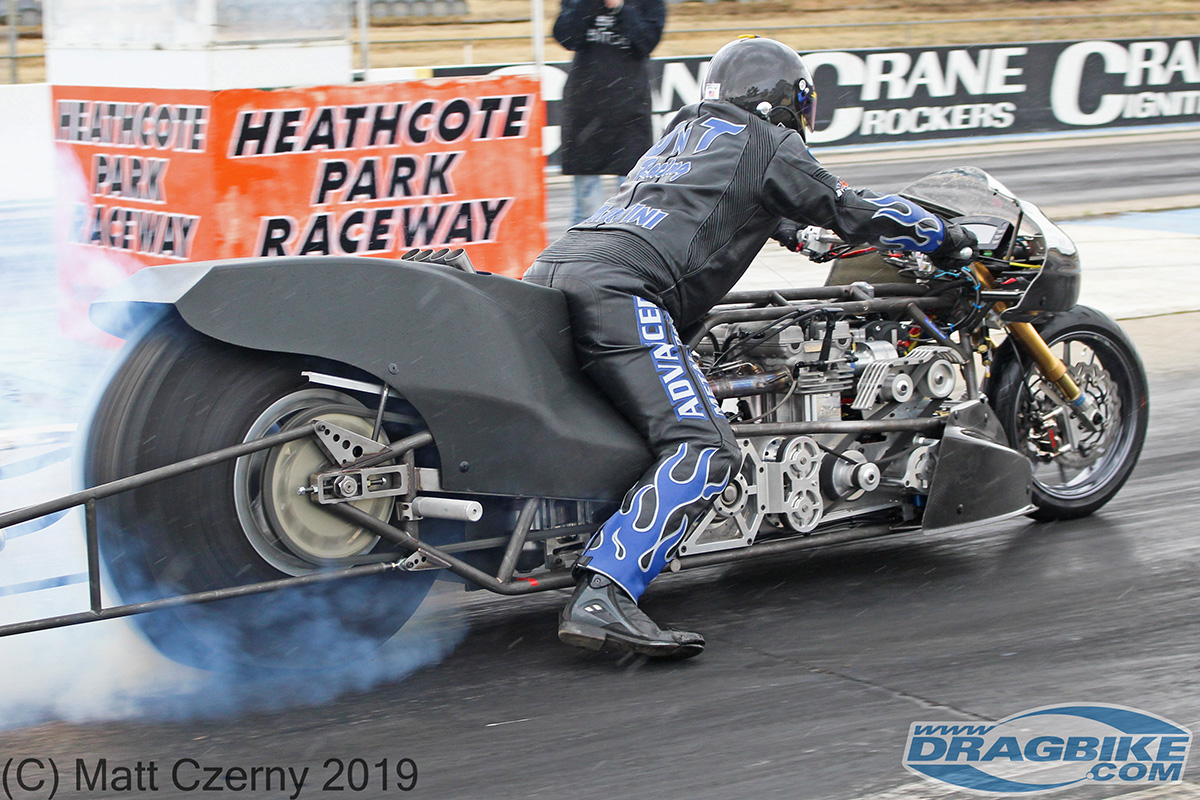 Damian, while new to Top Fuel motorcycle drag racing, is not new to racing high-speed drag bikes. “I started racing a modified stretched 84 katana in 1996. We set a national record of 7.55 @ 174.69 mph which stood for 15 years. It was a nitrous Pro Mod style bike. Home-made chassis built off magazine pics in 1999 with a lot of help from Bruce Van Sant.”

Damian chose well in seeking advice for his new venture. By calling upon the Alwine family, they are taking the advice from racers who’ve been there and done that. Damian commented “John has been at the top for a long time, and John has proven you can go quick and fast without a trailer full of motors. This is why I’m using his fuel and clutch management system; so he knows what I’m working with.” 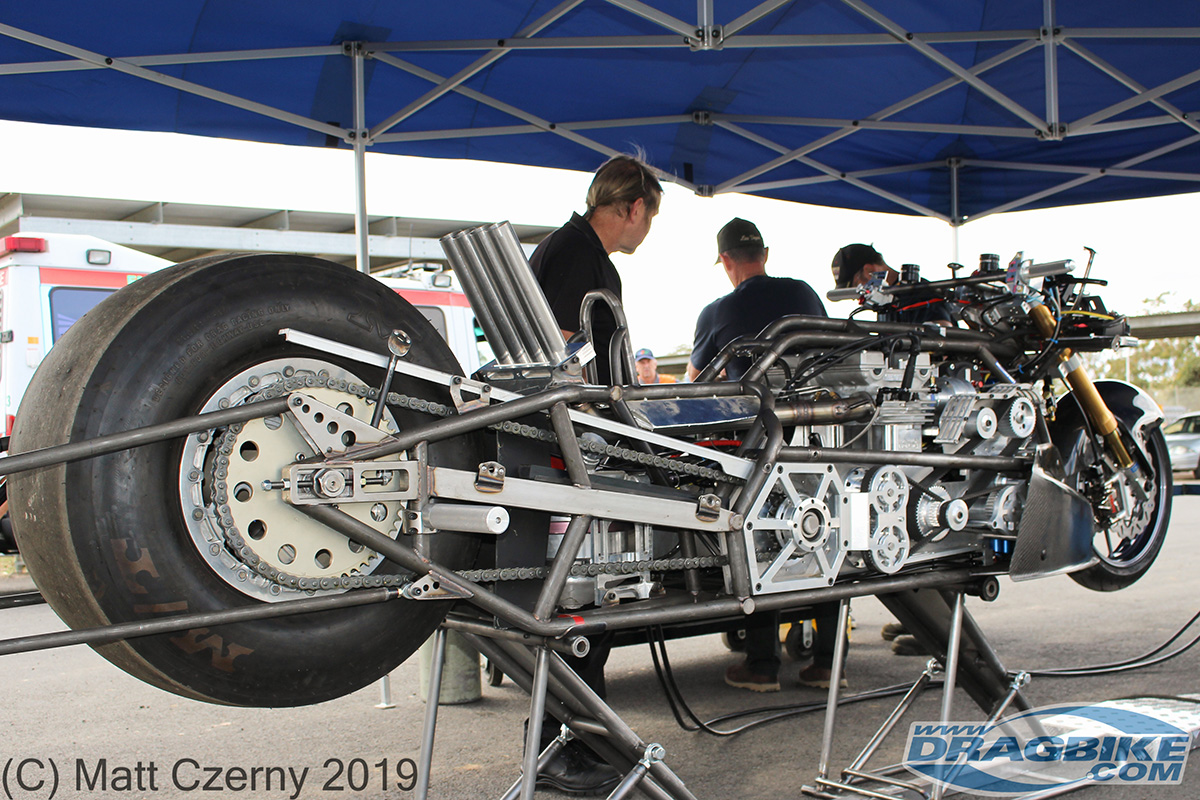 John Alwine commenting on Damian’s new effort stated “I have been helping Damian with the many aspects of assembly, the intricacies of engine building and setting up the fuel system. I’m doing my best to help him prevent damage during his learning curve. I may be taking a long trip in the not too distant future to the land down under.”

Damian has a very pragmatic outlook as a beginner in Top Fuel motorcycle drag racing “Primarily we aim to test during 2020, until we are comfortable with the bike and with myself as the pilot. This goes for my team as a whole. I simply won’t race until I’m comfortable I can ride the bike in a safe manner with respect to myself and for the rider in the other lane. If we are ready to actually race in 2020, only time will tell. We are under no false illusions as to the difficulty of the task at hand! Myself, learning how to pilot this beast and the team learning how to tune a new and untested combination; we know we have our work cut out for us. But there is a great measure of satisfaction in knowing we’ve achieved something a bit unique in building a bike with no previous experience with this class of motorcycle. So, of course, we expect some glitches along the way, that’s a given.” 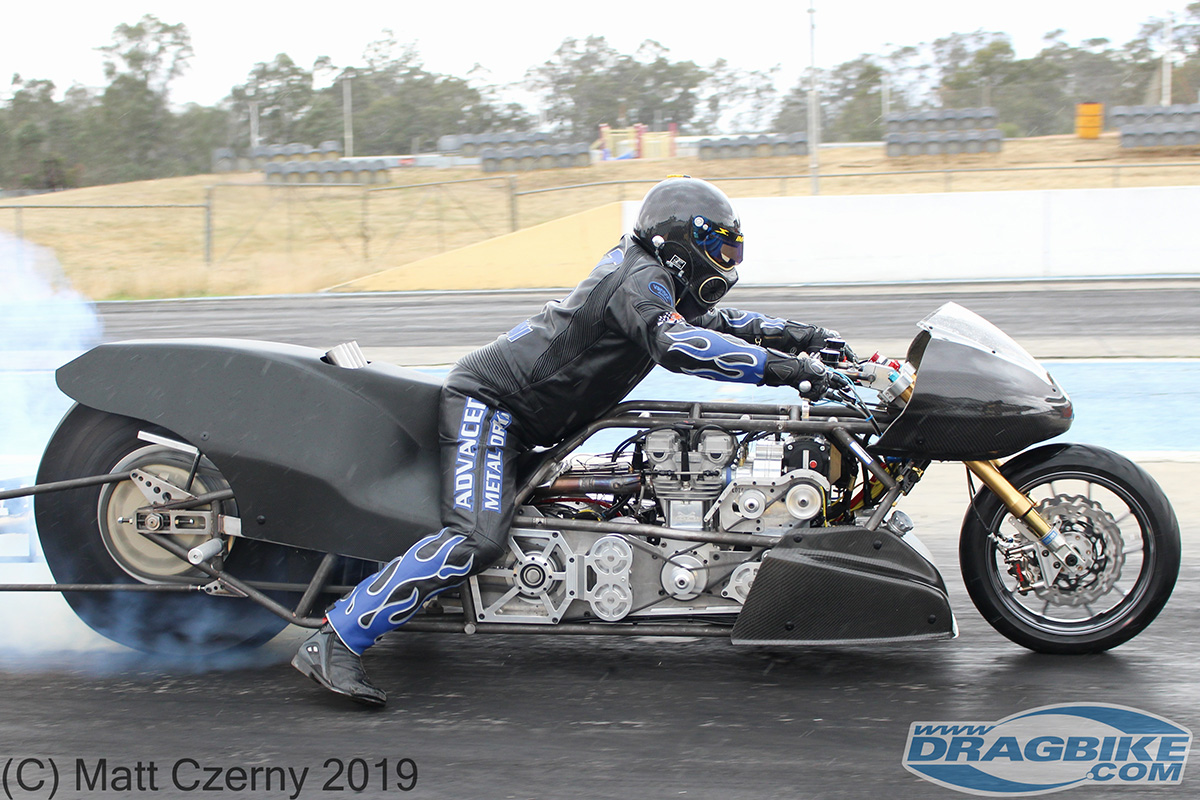 A bike this complex requires so many people with knowledge in many areas. Very few understand what it takes to build one. I have been uncompromising in the level of quality, many times making a component tow or three times until I was satisfied with the finished product. Even the top fairing, we designed it two years ago and made three different versions. It took six months to get to a final product.  There was no specific finished date, it was finished when it was finished. Without the help of all the people above, I could not have achieved what I did, in getting this far. 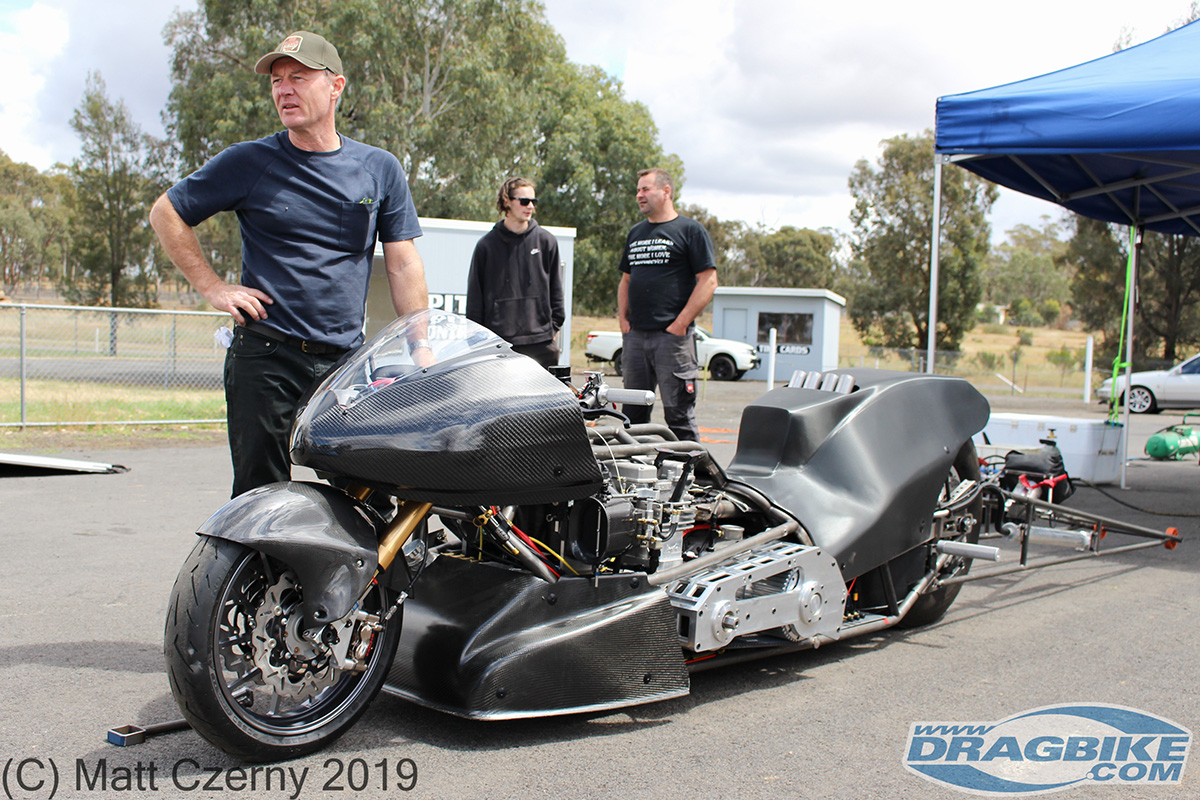 I would like to extend thanks to: First and foremost John and Chris Alwine, for their patience and willingness to be totally open with their knowledge and time. Without them, I could not have built this bike as I had absolutely no idea as to the task ahead and how to build it. In 2016 the Alwine’s and Hogan’s treated me like family at the Man Cup World Finals and gave me unlimited access to their operation.

A huge thanks to Eric Hochstetler at MTC Engineering for initially introducing me to John and for his help with his world-class products and knowledge. Leonard Azzopardi from Azzopardi Racing; for answering my constant questions and his support and help, also for the awesome machining he did on my bike. Travis Ayres with his CAD skills in designing many of the drive parts. Darren Carter at CRD Engineering for the billet sumps, and Mark Jenkin for building my motors and taking on the responsibility to teach me how to service them.

Catherine Kinder for helping get my parts to me from all parts of the globe.

The following have all helped with advice and help and their time in many ways: Darren Brinkman, Chris and Sharon Hand, Ian King, Marius van der Zijden, Mitch Brown, Sam Wills, Peter Wileman, Brian Cavlin, Jim Lukas, Mark at Kilmore Panels, Rod Clark. Rikard Gustaffson, Maurice Allen, Russel Clark for the use of his racetrack for our initial test. Paul Bushell for his time and assistance on our first test. Matt Czerny for taking the photo’s on our test day. 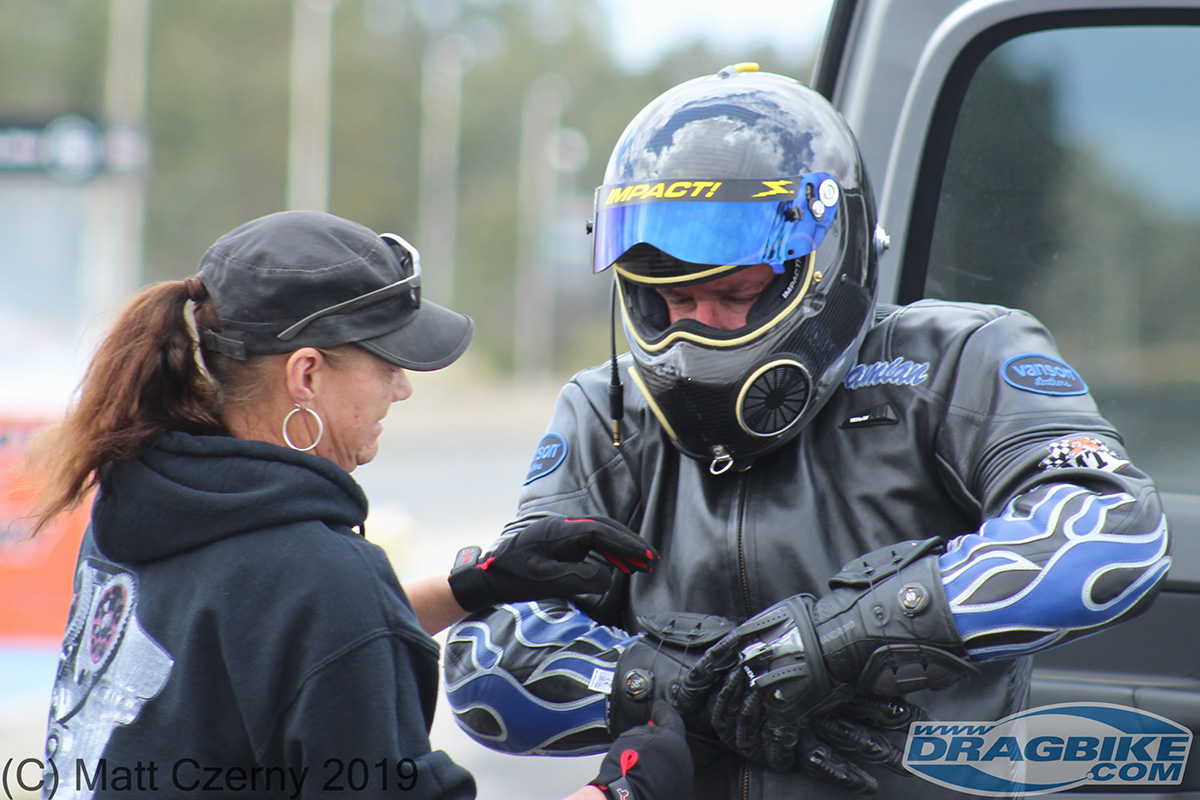 And lastly but most importantly my deepest thanks to my partner in this journey Tracy Stratford, for her unending support and faith in our dream. This is our bike and our journey.