Driving down Highway 151 through Darlington, South Carolina, you pass two pieces of history that played an important role in making motorsports what it is today. These spots are evidence of how one man’s idea and vision of a speedway grew in 1951 and helped shape stock car racing. The sights and sounds still come to life once a year when the stars of NASCAR attempt to win at the track known for being “Too Tough to Tame”.

A self-made entrepreneur, Harold Brasington had the necessary knowledge for excavating and grading the land for a speedway. Upon completion of Darlington Speedway, Brasington partnered with the LG Dewitt family to build another speedway just across the border in Rockingham, North Carolina. During this time, Brasington was approached by Bill Land with the idea of a speedway which would attract a different type of racer and fan. Under the guidance of the International Hot Rod Association’s President Larry Carrier, the Rockingham Dragway was constructed adjacent to the speedway and became a reality, opening in 1970.

Brasington’s interest continued to grow as he sought out new markets to house a world class drag racing facility. He was quoted in a local Florence paper saying, “I looked around Virginia, North Carolina, and upper Georgia for a site. Every time I would always wind up back on Highway 151 west of Darlington…”. After years of searching and efforts to raise funds, Brasington partnered with local businessman Woodrow Hall and began construction of a dragway just five miles from the place where Brasington made history 20 years earlier.

During the 1970’s, drag racing only had a few purposely built facilities across the country. As word spread about the dragway being built, sanctioning bodies across America jumped at the opportunity to partner with what was to be the “Bellagio” of tracks at the time. Wally Parks, founder of the NHRA approached Brasington about forming an alliance but the two were unable to come to an agreement. Larry Carrier of IHRA stepped in, and having worked with Brasington on construction of Rockingham Dragway, the two were able to settle on a seven year sanctioning agreement, including the guarantee of one major IHRA sanctioned race each year.

Once the contract was signed, it was official that Carrier and Brasington would work on the design of the track together. Looking at the track today, you will notice similarities to Rockingham and Bristol. This is no coincidence as the spectator viewing area and racer pit area are identical in all three tracks. The idea was to accommodate the racer with comfort while giving fans the best vantage point for watching the race.

One major difference debuting at Darlington was a separate tower to accommodate corporate America. The two- tower design would also have a major impact on how fans viewed the start of racing while accommodating the sportsman and professional racer in a way that would be beneficial for both. The new tower design allowed the professional racers their own set of staging lanes, eliminating congestion and confusion between racers during a hectic, fast-paced race day. Fans would hear the cackling of Top Fuel Dragsters and Funny Cars coming to life even before seeing them. Having the drivers come from between the two towers enhanced spectator viewing to the point that most tracks built after 1980 have a similar design.

Construction of Darlington Dragway was completed in 1976 with the anticipation of the IHRA Summer Nationals scheduled to take place in June. With unpredictable weather, the race was rained out only to be rescheduled to another rainout event. It seemed the track was destined for doom as bills began piling up and money running out, so Brasington and Carrier sat down to discuss future plans of the dragway. Knowing the weather in the south was not as harsh as other parts of the country, the two decided that by having the race in the early part of the season, more racers and fans would be attracted. Starting with the 1977 race season, IHRA would kick off its National Event Circuit at Darlington Dragway with the Winter Nationals.

The stage was set to see how well this new racing facility would handle the mass of racers and fans after the long awaited official start. Newspapers from across America came to Darlington and met with Alan Miller who was appointed as the official media relations chair. The race would come through in dramatic style attracting nationally recognized names such as Don Garlits, Connie Kalitta, Kenny Bernstein, and Bob Glidden. As crowds flocked to the event they would be greeted by local professional drivers such as Roy Hill and Ronnie Sox who were based just up the road in North Carolina. The event made a tremendous impact and would become a permanent spot on the IHRA National Event Tour.

Darlington Dragway’s tremendous popularity would attract the largest sportsman drag racing crowd above any other National Event on IHRA’s circuit and would spawn IHRA’s All-Sportsman National Event called the Pro- Am Nationals. Local “weekend warrior” Larry Stott would win his first National Event in the first-ever race he entered. Many other sportsman champions would eventually stake their claim of victory at Darlington including multi-time NHRA Champion David Rampy, Mike Boyles, and Curtis Smith. For many IHRA sportsman racers, the timing of both the National and Divisional Events were critical in making or breaking a championship so it carried the same prestige of winning NHRA’s famous race as the US Nationals.

Now in its 37th year of operation, Darlington Dragway still continues to host the most heavily attended sportsman crowd than any other track throughout the year. The Labor Day IHRA Pro-Am Race is still critical in deciding Division Champions each year while providing many of the older sportsman drivers a chance to travel down memory lane. Ronnie Siders, current owner of the facility, hosts a weekly bracket program along with a similar sportsman version of the former Winter Nationals. While the sights and sounds of the Top Fuel and Funny Cars may be gone the track remains a fond memory in the hearts and minds of many racers and fans.

The Track is currently under renovations, including the removal of armco guardrails with a new concrete wall. Visit Darlington Dragway’s Facebook page for more updates! 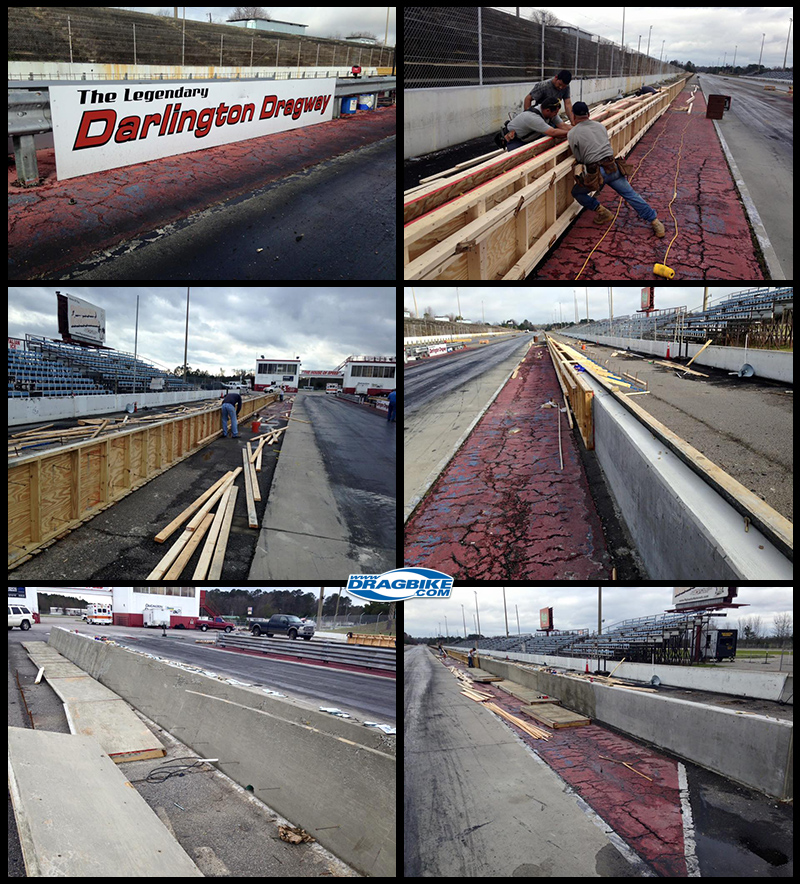