Team DME Racing set out two weeks ago for grueling back to back races. The first stop would be in Memphis, TN for the Man Cup event. Terence Angela and Joey Gladstone would be leading the charge in Memphis as Jason Dunigan would wait to join the crew the following weekend in Maryland. With the track melting temperatures of the weekend it would most likely turn into a “tuners” race as Gladstone and Angela would have to tiptoe down the tricky track conditions. However, that was thrown out the window during

With the track melting temperatures of the weekend it would most likely turn into a “tuners” race as Gladstone and Angela would have to tiptoe down the tricky track conditions. However, that was thrown out the window during first qualifier as the teammates laid down 6.88 and 6.92 passes to go number one and two. The brain trust of Andy Sawyer, Dimey Eddinger, and Skip Gladstone would continue to prepare and tune the bikes flawlessly throughout the day and both riders would improve to remain at the top of the field. Joey would stay number one with an impressive 6.83 pass and Terence would improve to a 6.87. Gladstone also qualified number one in the Real Street category with a 7.83. 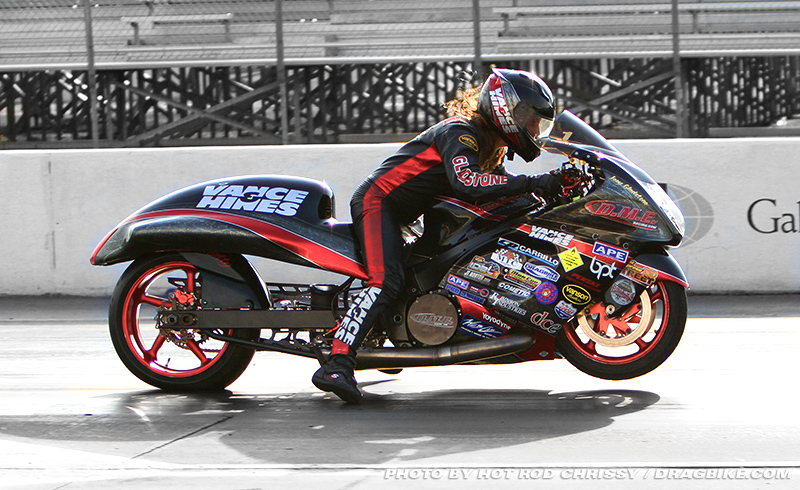 Race day would arrive with even hotter temperatures, but that wasn’t going to slow up DME. With a first-round bye, Sawyer loaded up an all-out assault to see what the bike would hold for Gladstone and hold it did. Ripping off an event leading 6.78 showed that the team was ready for the field. Angela made a solid pass in his matchup winning with a 6.96 to advance to round two. Gladstone would easily dispatch his second round opponent with another jaw-dropping 6.78 pass in the heat of the day. Hoping for similar results, the crew decided to lean on Angela’s bye pass and the result was a multiple wheelie 6.95 pass.

The semi-finals would see Terence face Bud Yoder and everyone braced for an epic race. It started off that way but around 330, Angela’s bike went into a huge power-wheelie causing him to get out of the gas to regain control. That gave Yoder the win, however, it cost him his engine in the process. Which in turn would give Gladstone a broke bye for the final round. But Team DME would not settle to just break the beams, they put on a show for the fans who braved the heat and Joey finished off the event with a 6.80 pass. 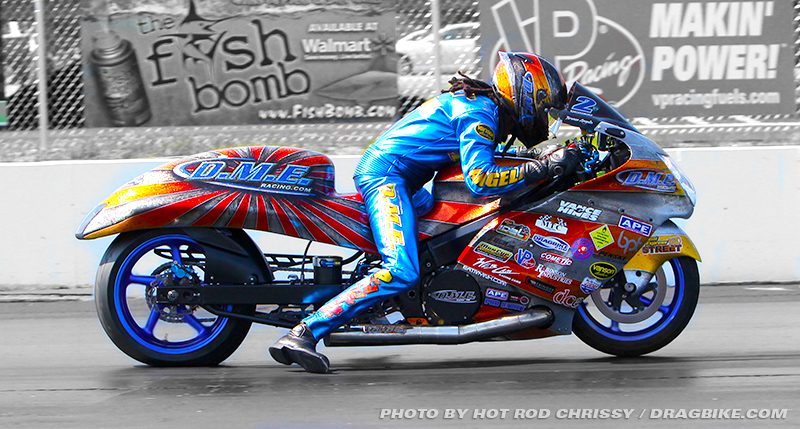 With a light field of Real Street racers, Gladstone only needed to make three clean passes to complete the double-up he’s been chasing. With two identical 7.82 passes for rounds one and two he found himself in the final against long-time class veteran Jason Herron. Alas it wasn’t to be though, as a hiccup with the clutch lit the red-light giving Jason the win. And although Joey was unable to double-up, he did regain the points lead in Pro Street for Man Cup.

With a win, runner-up, and semi-final appearance the team loaded back up and headed to North Carolina for a few days. With such a tight time frame it took the usual TEAM effort as everyone around the shop worked hard to get the bikes ready for IDBL. Lead engine builder Skip Gladstone made sure the bullets were ready for another weekend of abuse while everyone hustled around the clock to get things ready. 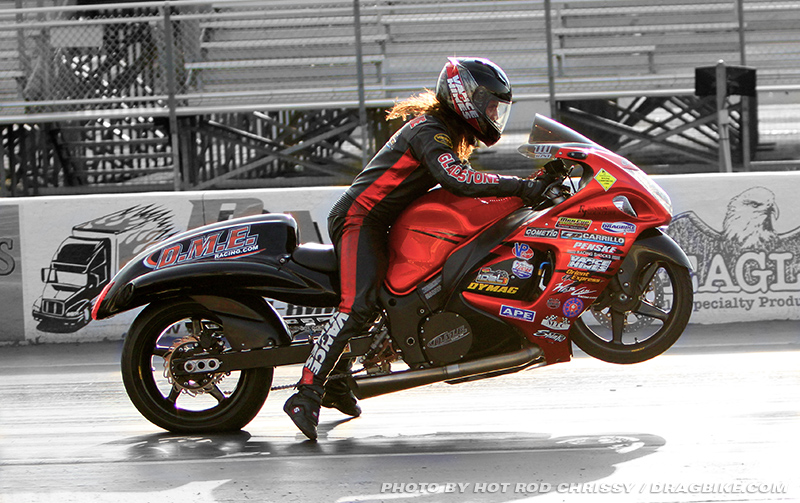 The team arrived at Maryland ready for another long hot weekend of racing. Some scattered showers threatened the event throughout the weekend but also brought a small reprieve from some of the heat. Saturday qualifying was shortened due to the rain, but after the two sessions, Gladstone and Angela had once again went one and two. Jason Dunigan put up a respectable 7.09 for the fourth spot, which actually kept him from facing a teammate during round one. Rounding out the DME qualifying efforts were Gladstone once again taking the Real Street top spot with an impressive 7.76 pass on his all motor Hayabusa.

Of course part of the perks of being the number one qualifier are getting a first-round bye if there are an odd number of bikes. Gladstone would earn that in both classes and get the free pass straight into round two. Dunigan would have his hands full in his first-round opponent of Tony Ficher who qualified third with a 6.90. Team DME gave Dunigan all the power he needed and unfortunately a little too much. Around the 330 foot mark, Jason would overpower the track with a crowd-pleasing (but race losing) 45-degree wheelie. Angela would move on to a second round bye after his winning 6.96 pass. 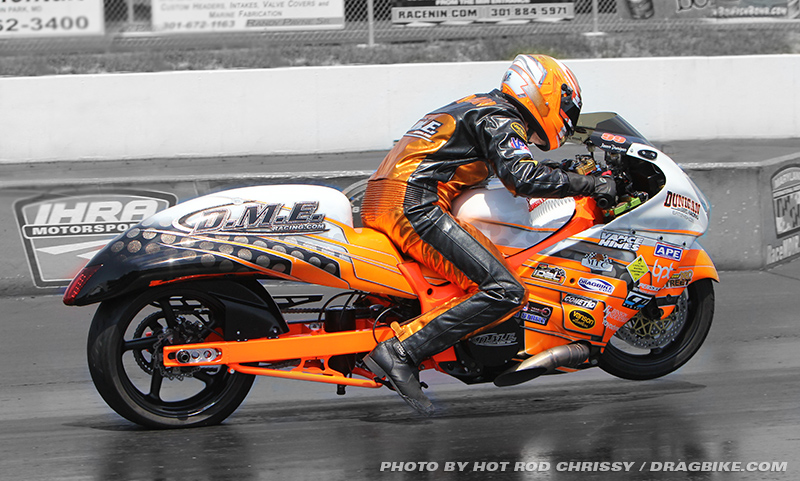 Second round matchups for Gladstone would yield two good races. Fighting off a top end charge of Richard Diggs nitrous ZX-14, Joey prevailed in Real Street to reach the final round yet again. In Pro Street he would be the chaser, as he used some riding prowess to overcome some issues early on in his run to blow by Ficher at the finish line.

Looking like déjà vu from the weekend before, Gladstone had yet another chance for a double up. This time he would face his teammate Terence Angela for the Pro Street crown. Both riders got off the starting line fine, but both also could be seen rolling off and on the throttle furiously as they battled traction down track. But Gladstone would make it to the stripe first, his 7.01 just barely edging Angela’s losing 7.04.

With no time to celebrate, Joey rushed back to take on Anibal Merced in the Real Street final. Facing yet another nitrous bike he knew Merced would be charging hard on the top end. When the tree dropped both races were clean and green and the race was on. But in a reversal of the weekend before (where he went red), Gladstone would actually suffer a holeshot loss as Merced kept his starting line advantage all the way to the end.

But you can’t win every race, every time, so the team was extremely pleased with their two-race efforts. Trophies were won and fun was had.

Dimey Eddinger and Andy Sawyer will now pack up and head to Aruba with Terence Angela and Chris Connelly. The duo will be representing DME Racing in the Pro Bike class for the One Cool Summer event at Palo-Marga Raceway. 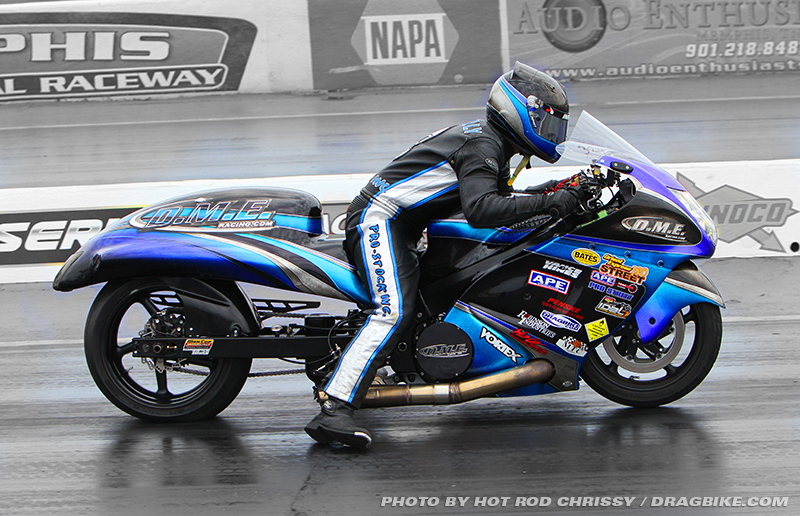