HomeTeam ReportsDME Racing takes 2 Records and a Win at the U.S. Nationals

DME Racing takes 2 Records and a Win at the U.S. Nationals

DME Racing takes 2 Records and a Win at the U.S. Nationals

The DME Racing Team experienced an unusual outcome during the 46th Annual Orient Express U.S. Nationals IDBL race. But then again, the whole weekend’s race was an unusual event. The IDBL staff once again proved why they are at the top of their game as intermittent showers threatened the event on both full days of racing. With almost 700 entries the staff worked tirelessly (seriously, sleep was at a premium) to get all the racing finished. 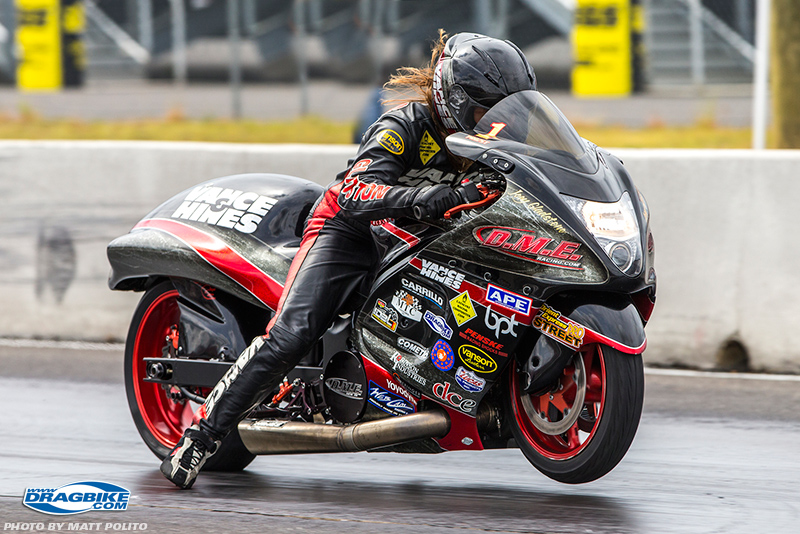 Saturday’s first qualifier went off without a hitch at the scheduled 1pm time slot and was the first of many surprises of the weekend. Gladstone and Angela ripped off almost identical 7.05 passes to qualify 3rd & 4th, while Dunigan fought wheelies early on to land in the 8th spot. Just minutes after making his Pro Street pass, Joey was quickly back in line for Real Street. The team made a flawless pass to stun the crowd on their unique all motor combination and take the #1 qualifying spot by over seven hundredths. Unfortunately Mother Nature stepped in throughout the remainder of the day causing a change in plans which resulted in only one more qualifier being given to take place on Sunday morning. The team worked late into the night as they always do in order to improve their starting positions.

As the sun came up on Sunday morning everyone readied themselves for a long day and the final qualifier that was coming up quick. Taking advantage of the cool morning conditions, team boss Dimey Eddinger gave Andy Sawyer the go ahead to turn the bikes up. The results were no less than Joey grabbing yet another #1 qualifying effort with a lightning quick 6.864 pass. Meanwhile, Terrence was able to move up to the #2 spot but in the process he reset the Pro Street mph record by virtue of his insane 216.51 mph pass. Last, but certainly not least was the beautiful orange bike of Jason Dunigan who was able to improve upon his qualifying position and time with a much more controllable 7.19. Gladstone was able to maintain his #1 spot in Real Street as no one else could match his previous 7.82 pass. 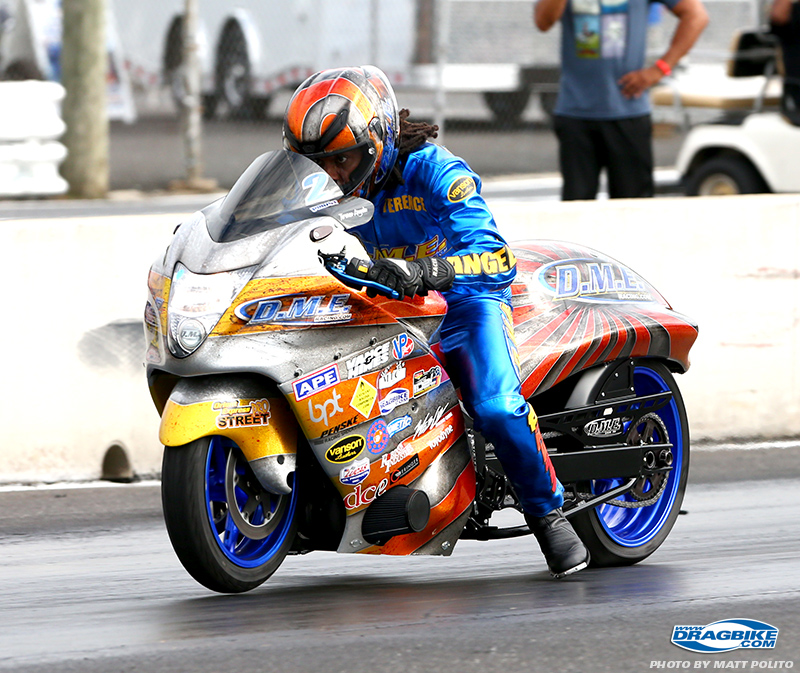 First round of Pro Street eliminations certainly kept the saga going. Joey took a first round bye to start things off for DME and then Jason Dunigan pulled off a season best 7.025 pass to win first round over Tony Ficher. The excitement was evident after Dunigan’s pass; however that was quickly squashed with the unfortunate first round exit of teammate Terrence as he battled issues down the track. Riding the roller coaster of drag racing emotions the team quickly went to retrieve their riders at the top end and get Joey back for his Real Street pass. Taking a broke bye this time, Joey went on to give the Atco fans a treat with the first 7.7s pass on an all motor Real Street bike. Stopping the time clocks at an incredible 7.775 at 175.02 mph gave the young Gladstone yet another accolade to add to his resume.

With no time to spare the team quickly went back to work to prepare for the second round of eliminations. The constantly changing weather conditions were proving to be quite a headache for head tuner Sawyer, but the “brain trust” got together and devised a plan for round two. Out the gate they experienced a nail biter as Joey was able to overcome a starting line disadvantage and drive around Richard Gadson in round two. Facing red hot Ehren Litten (who had recorded several 6 second passes over the weekend) Jason Dunigan knew the team would have to step up to the plate and told them to “go for it”. The tune up was there and had the bike not lost traction early on in the run it would have been a very close race. As usual Dunigan was still in high spirits and is eagerly looking forward to the final IDBL event. Joey backed up his Real Street record during his competition single in round two with a stellar 7.76 pass. 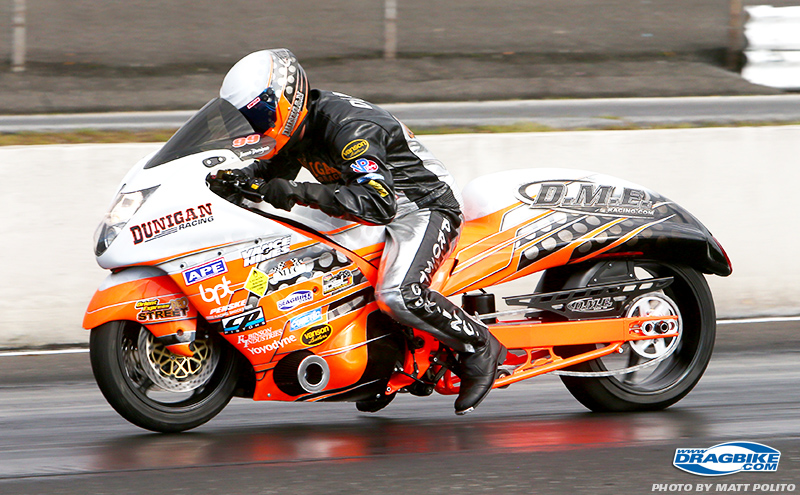 All the team members were on deck as they now chased another milestone in an attempt to win both Pro Street & Real Street at the same event. With three competitors left on the ladder in Pro Street Joey faced off against Justin Shakir and needed his proven DME horsepower to overcome early traction issues. This would put them into the final round against Ehren Litten. As fellow competitors awaited Gladstone to return for his Real Street pass the IDBL announcer reiterated the significance of potentially winning both Pro classes. In what would be his closest race of the weekend, Gladstone used a starting line advantage to help stay in front of another all motor combination in Del Flores. This punched his ticket for his second final round matchup.

Their roller coaster ride continued on for the weekend as the excitement was quickly squashed once again. As the team quickly worked to turnaround the bikes for the final rounds it was discovered that the Pro Street bike had suffered severe engine damage…. After much deliberation and considering the time constraints the team had no other choice than to forfeit the final round to Ehren Litten as they would be unable to make the call. However, the team quickly dismissed the bad news and got ready for their matchup against Rickey Gadson. Despite a starting line disadvantage Joey quickly made it up and marched down the track to become the first all motor bike to win a Real Street race. Gladstone had this to say about his first Real Street win, “This is something that Dad (Skip Gladstone) and I have been chasing for years. We were so close a few years ago with our turbo GSXR-1000 and I don’t think either of us would have ever imagined we would be standing here with an all motor combination holding this trophy. Of course I have to thank our amazing team and great sponsors, but this is extra special for me and dad for all the hard work that’s gone into this bike.” 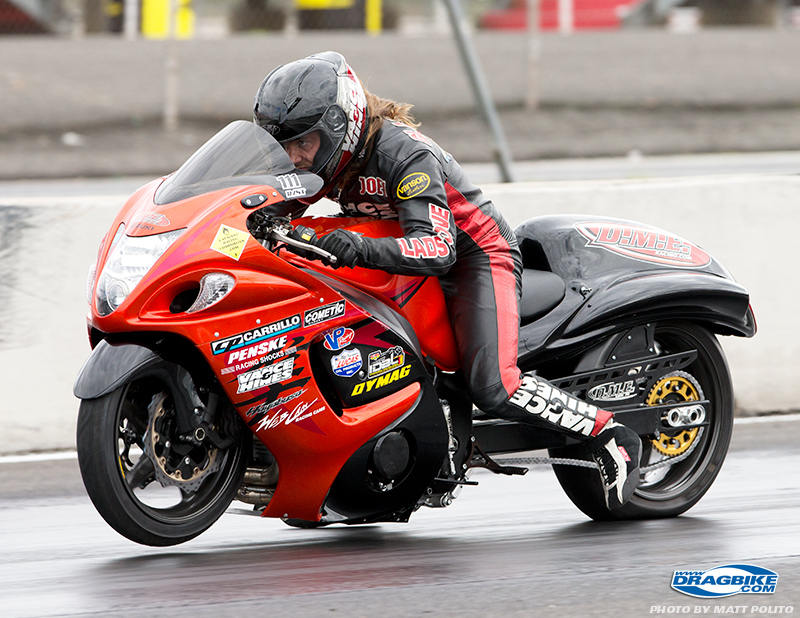 This crazy, wild, roller coaster of a weekend was one the team will certainly not forget anytime soon. From the new records by both Joey and Terrance to the season best for Jason the team really came together on this particular weekend.