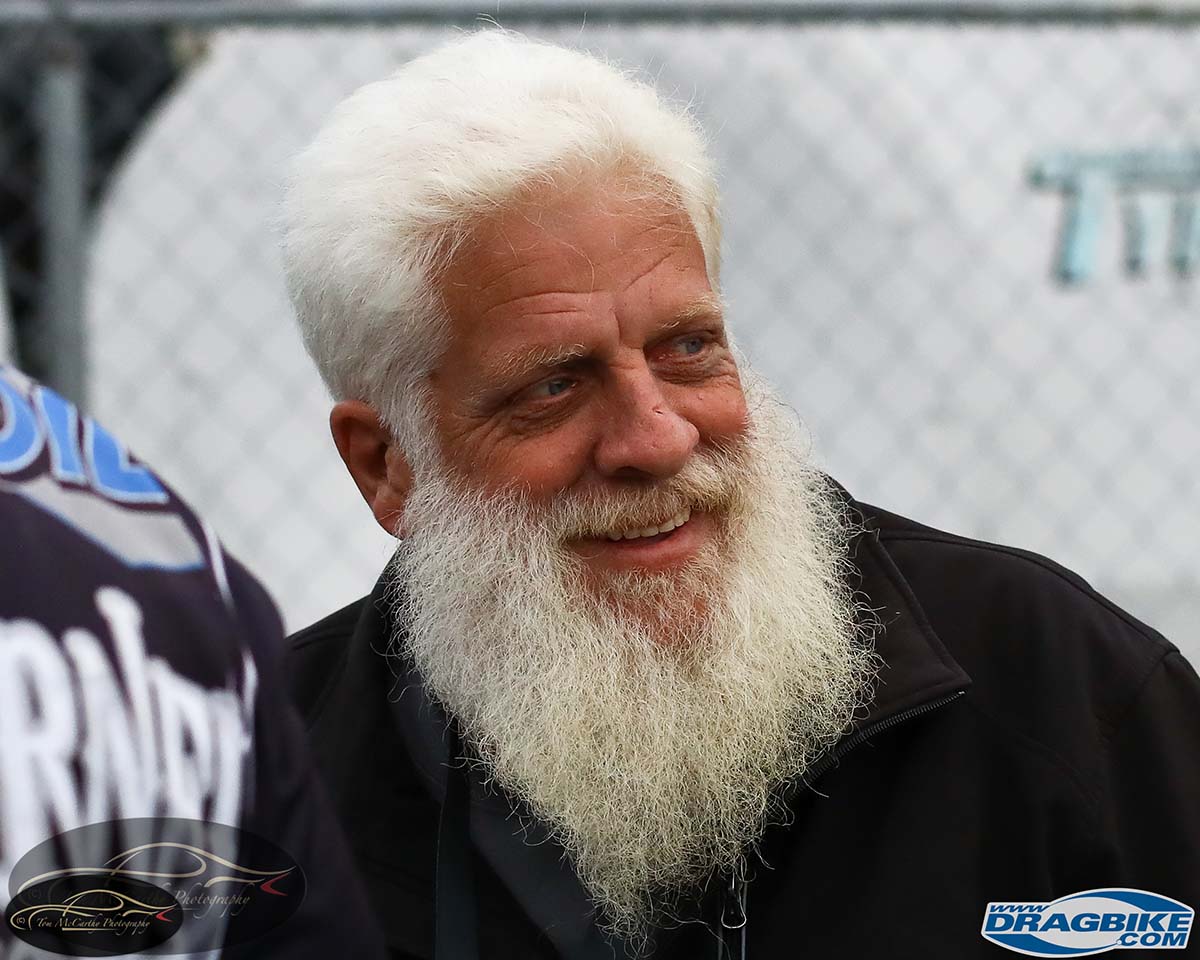 On Saturday evening, January 15, 2022, the heart of Donald “DJ” Jonson, stopped beating while he was with friends in DeLand, Florida. Don was at the home of Kirby Apathy, visiting Kirby & Lana at the time he started not feeling quite right. Late in the afternoon, he asked for them to call EMS, which they did. But before emergency medical services could arrive, DJ passed on with Kirby holding him in support.

While DJ became a tune-up artist, crew chief, and bike builder for many, he was best known for his decades of racing with another nitro-nut from Nutley NJ, Larry “Drums” Brancaccio. DJ and Drums began their nitromethane-fueled association close to the 1990-time frame when Drums was bitten by the nitro-bug. DJ taught Larry the ropes and for close to two decades Drums & DJ were a force to be reconned with at any MC drag racing event where Nitro Harleys would be performing. 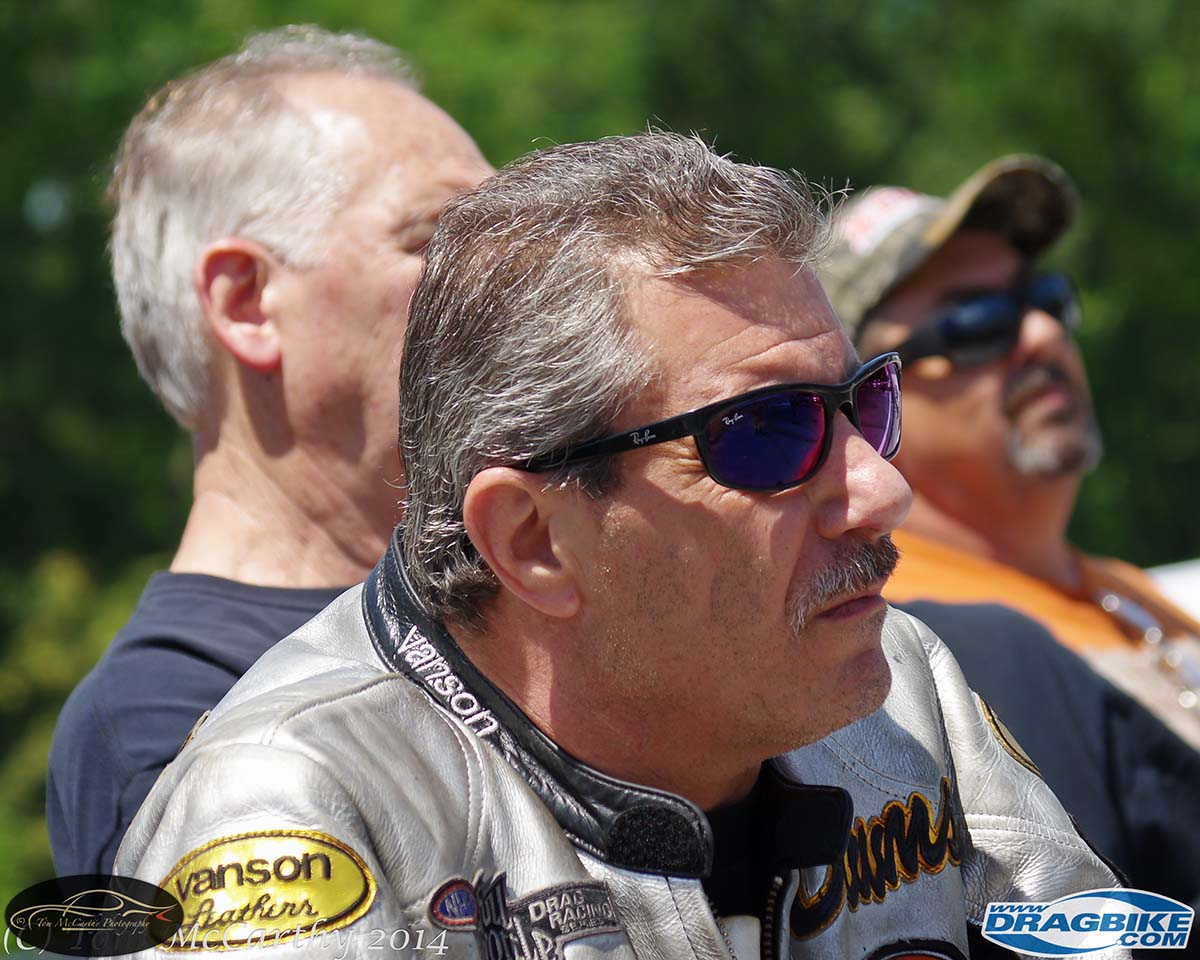 From his shop in NJ, DJ learned to not only assemble the motors and build the bikes, but DJ went on to build complete, turn-key fuel bikes from the frame rails up. Don could not only build but tune the bikes and he built many a fuel bike chassis from Pro Fuel to Nitro Funny Bike, to Top Fuel Harley. DJ has many a chassis out there still today, handling the 1,000 HP Top Fuel Harleys that run deep in the six-second elapsed time zone at over 230 MPH.

DJ’s great work with Drums led him to a fateful relationship with another great racer, c of Japan. DJ and Tak teamed up when “Crazy Tak” decided to take on the task of racing Top Fuel Harley drag bikes. DJ taught Tak, just as he mentored Drums.

Tak and DJ decided around the 2015 time frame, to begin the march to go for the first 5 second ET in V-Twin, Top Fuel Harley racing. Together they created a blown TFH and they came within a breath of doing exactly that. On 17 November 2017, Tak and DJ were in competition with the Man Cup motorcycle drag racing sanction and they stunned the world with a 6.0129 elapsed time. Still today this is the quickest pass ever by an NHRA Top Fuel Harley. That drag bike was built and tuned by the Nitro Santa his bad self: DJ. 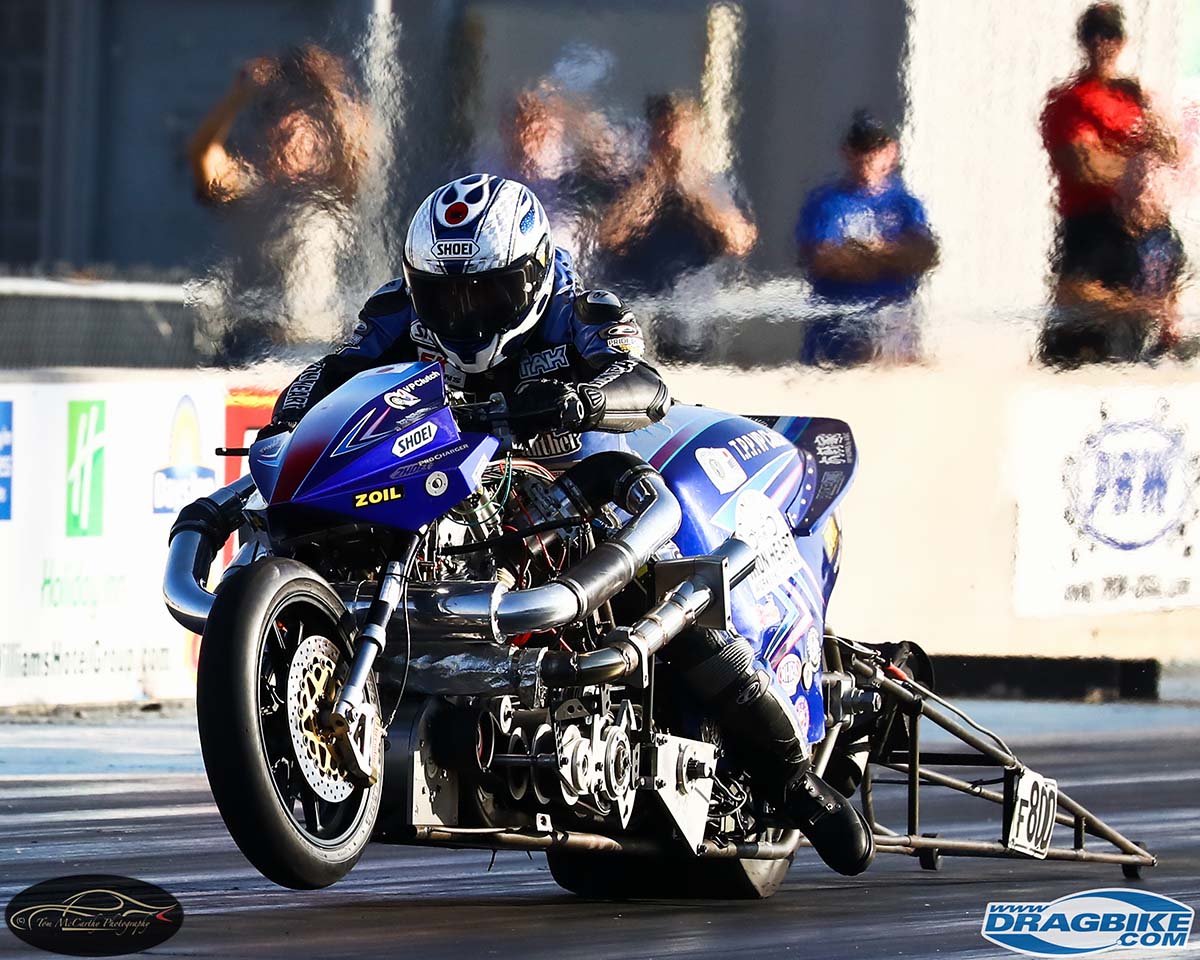 Of the many things DJ accomplished during his near 4 decades of Nitro Harley drag racing, to the benefit of all: it was what DJ gave that mattered most. He helped many a budding Nitro pilot get their baptism of fire with CH3NO2. DJ was instrumental in the careers of many, too many to mention, who’s comments now flood social media sites remembering this significant historical figure.

Approximately ten years ago, DJ left NJ for the warmer climate of Florida and to get closer to where the year-round racing action was. He first settled in with racer Paul Kelly for a few years, then when Paul moved, DJ acquired a motorhome and took up residence nearby his close friend Kirby Apathy. 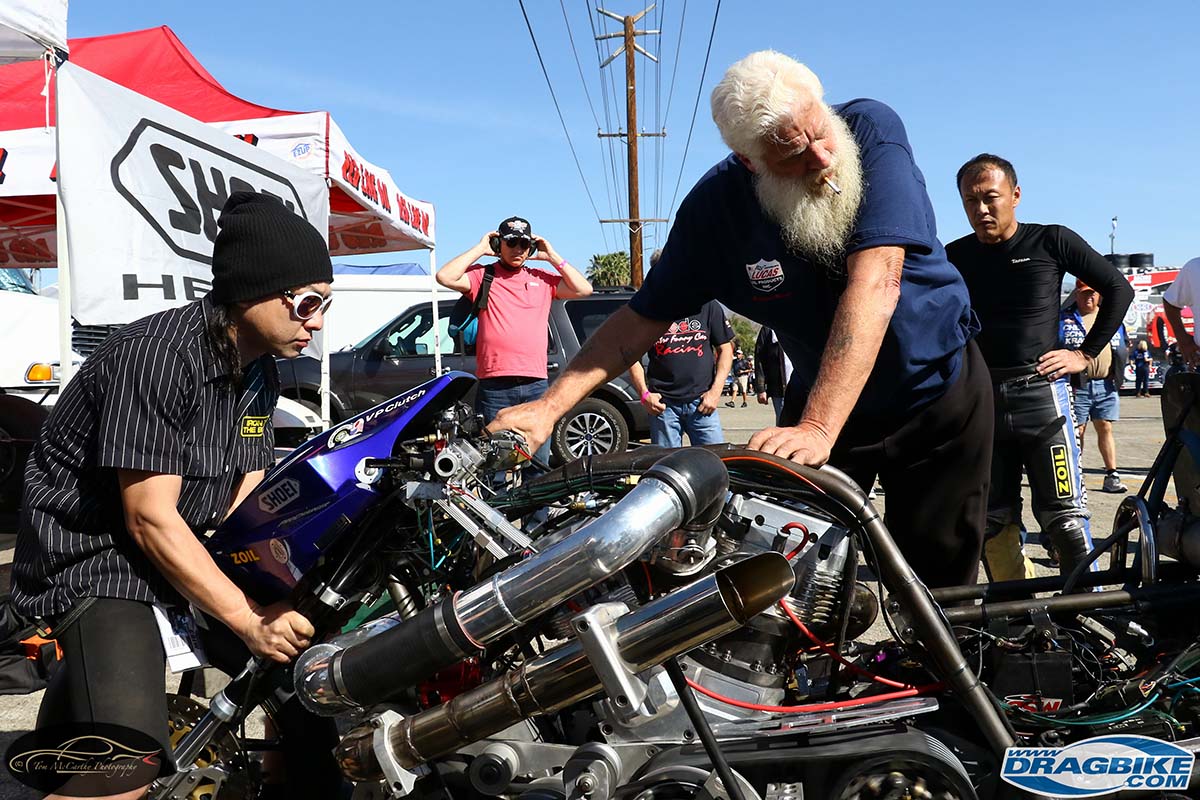 Kirby and DJ became inseparable friends in the past five years and while DJ helped Kirby with his racing program, DJ and Kirby spent countless hours in Kirby’s shop together attending go-fast needs of the various Nitro Harleys they both were working on.

Tak Shigematsu’s Top Fuel Harley racing plans, like everyone else’s, took a big hit in 2020, due to the emergence of the Covid-19 Pandemic. Only recently, with 2022 just beginning, have the international travel restrictions been easing up and the Tak DJ team were targeting at least five or more events in 2022. Tak is heartbroken at the loss of his friend and their racing plans – dashed.

With DJ’s passing and as he now joins his good friend Drums in the great beyond, the world of motorcycle drag racing is again a little less colorful, minus these two characters. DJ has been a fixture at motorcycle drag races featuring nitromethane burning for so long it’s hard to imagine a Nitro Harley event happening and DJ not being there. 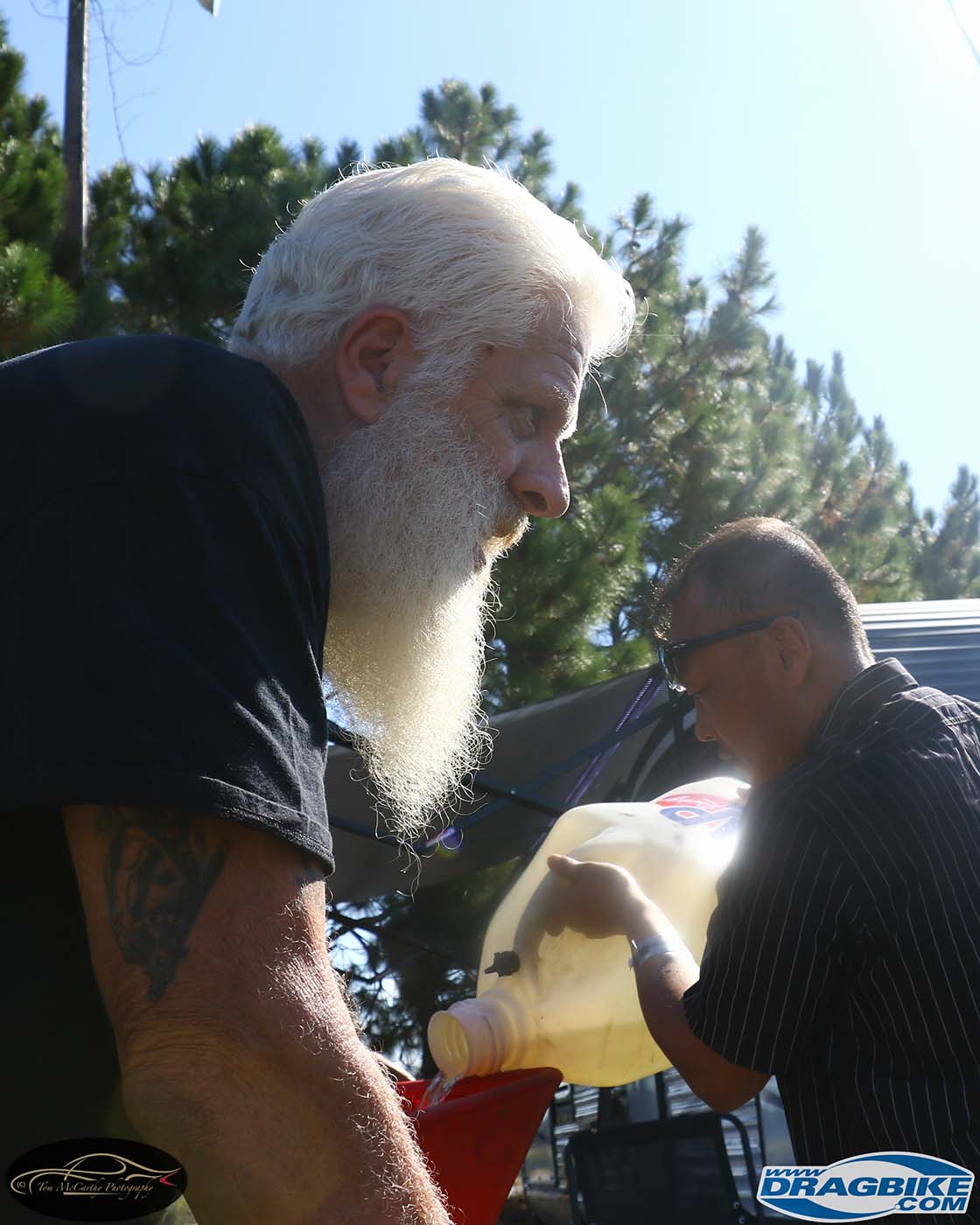 With his signature full long white beard, the Nitro Santa will, from his departure date forward, be lurking in the shadows intently watching all that unfolds with the nitro bikes. He may be gone from this earth, but his spirit, his passion for fuel-burning nitro Harley’s will never die, for he has passed that on to many motorcycle drag racers.

Services for DJ, when appropriate, will be announced by his family, sometime in the future. Till then, say a quiet prayer please for this nitro-warrior.