Historic Past is Present

If you’re looking for something to do this summer and you’re headed out to Sturgis, South Dakota, for Bike Week, don’t miss your opportunity to stop at the Harley-Davidson Museum, in Milwaukee, Wisconsin, and see their exhibit on drag racing.  Aptly entitled “Drag Racing: America’s Fast Time” this exhibition is a salute by the Harley-Davidson motor company to NHRA drag racing, the exhibit is excellent in both scope and presentation.

This museum exhibit is a collaboration between the Harley-Davidson Motor Company and the National Hot Rod Association giving visitors a look at five decades of drag racing. Together with great effort, they have brought NHRA drag racing, including motorcycles, to the American public. Not everyone can make it out to Pomona, California, to the NHRA’s museum on drag racing, but with the new HD – NHRA exhibit in WI, some truly great and historic elements of the sport are now on display until September 5, 2016.

For NHRA race cars, the Stone, Woods and Cook, 1941 Willys, “Swindler B”, and Don Garlits “Swamp Rat 13” are in display in all their glory. For historic drag bikes; Ray Price’s Funny Bike, Chet Herbert’s “The Beast”, Tator Gilmore’s double, Clem Johnson’s “Barn Job,” E.J. Potter’s “Widow Maker” and the amazing R.C. Engineering T/G Honda once ridden to prominence by Terry Vance is there too. From the modern era, a Vance & Hines NHRA, P/S motorcycle is also part of the exhibit.

NHRA Top Fuel car driver Doug Herbert, whose dad was the creator of “The Beast” was more than pleased with the presentation when he traveled to Milwaukee to see the exhibit. Doug owns The Beast and loaned it for the exhibit. He was also a bit surprised to see a large photo of his famous nitro Top Fuel car explosion from the 1999 NHRA World Finals in Pomona on display in the museum. Yes, the whole history of NHRA drag racing including Harley drag bikes, are given their due in this presentation to the public. 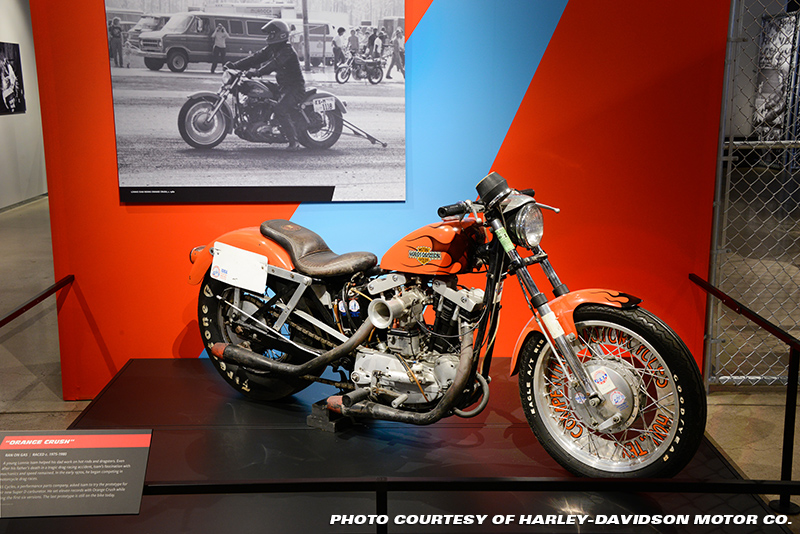 Tom Riser’s “Super Sportster” on display is a fantastic example of a Harley Davidson drag bike from the early years of motorcycle drag racing. It’s sleek, fast looking, light weight and powerful in it’s presence. The bike is super clean and there is not a component on the bike it that doesn’t scream “For racing only.”

As with every good museum display, attention to detail is of great importance. One of the items on display currently is the front motor drive sprocket off one of Tator Gilmor’s fuel bikes. It was returned to him by a fan who happened to see it fall from the sky after one of Tator’s high power launches tore it off the bike, sending it skyward. Fortunately, for all concerned, the drive sprocket landed in front of the fan walking in the pit area and not on him.” Such is the power of these thundering Harley Davidson drag bikes. 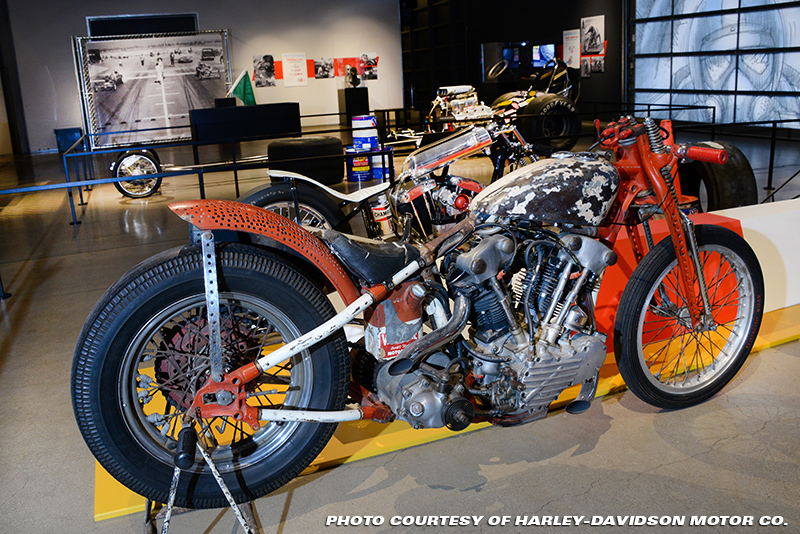 That Ray Price’s F/B is on display is a great tribute to a great Harley Davidson drag racing legend. Ray drag raced only Harley Davidson motorcycles from the 1960’s until his passing in December of 2015. To his last breath, the man who raced Harley Davidson drag bikes is not only the father of the Funny Bike class, but was also the founder of the Top Fuel Harley Racer’s Association.

And in keeping with featuring Harley Davidson NHRA drag racing greats as part of theme, the exhibit boasts the presence of an impressive painting by renowned motorcycle artist David Uhl of Harley Davidson drag racing legend Joe Smith. The painting on canvas depicts Joe piloting his Kunckelhead powered drag bike, left hand on the shortened jockey shift stick, ready for the next gear. Right hand on the throttle full open, you can feel the thrill of Joe winding out the motor as the bike thunders down the track. All the details you’d seek in such a painting are there from the mouse-trap clutch component to the dual Linkert carbs feeding the motor from the left side of the bike.

Motorcyclist’s heading out to Sturgis for the bike rally this year would do well to stop at the HD factory “garage” and check out this exhibit. Believe me, it’s worth the effort if you love Harley Davidson drag bikes and have a place in your heart for drag racing.