It has been stated by men much wiser than me, that safety rules are often written in the blood of others. That’s a high price to pay in motorsports, but until performance barriers are breached, racers can’t fully comprehend what’s on the other side until they get there.

For example, prior to drag bikes going in excess of 200 MPH in the quarter-mile, no one knew that aerodynamics would necessitate getting the air stream off a rider’s hands. Once drag bikes began traveling at speeds in excess of 220 MPH, upper air dams became utilized universally making driver blow-offs nonexistent, thankfully. 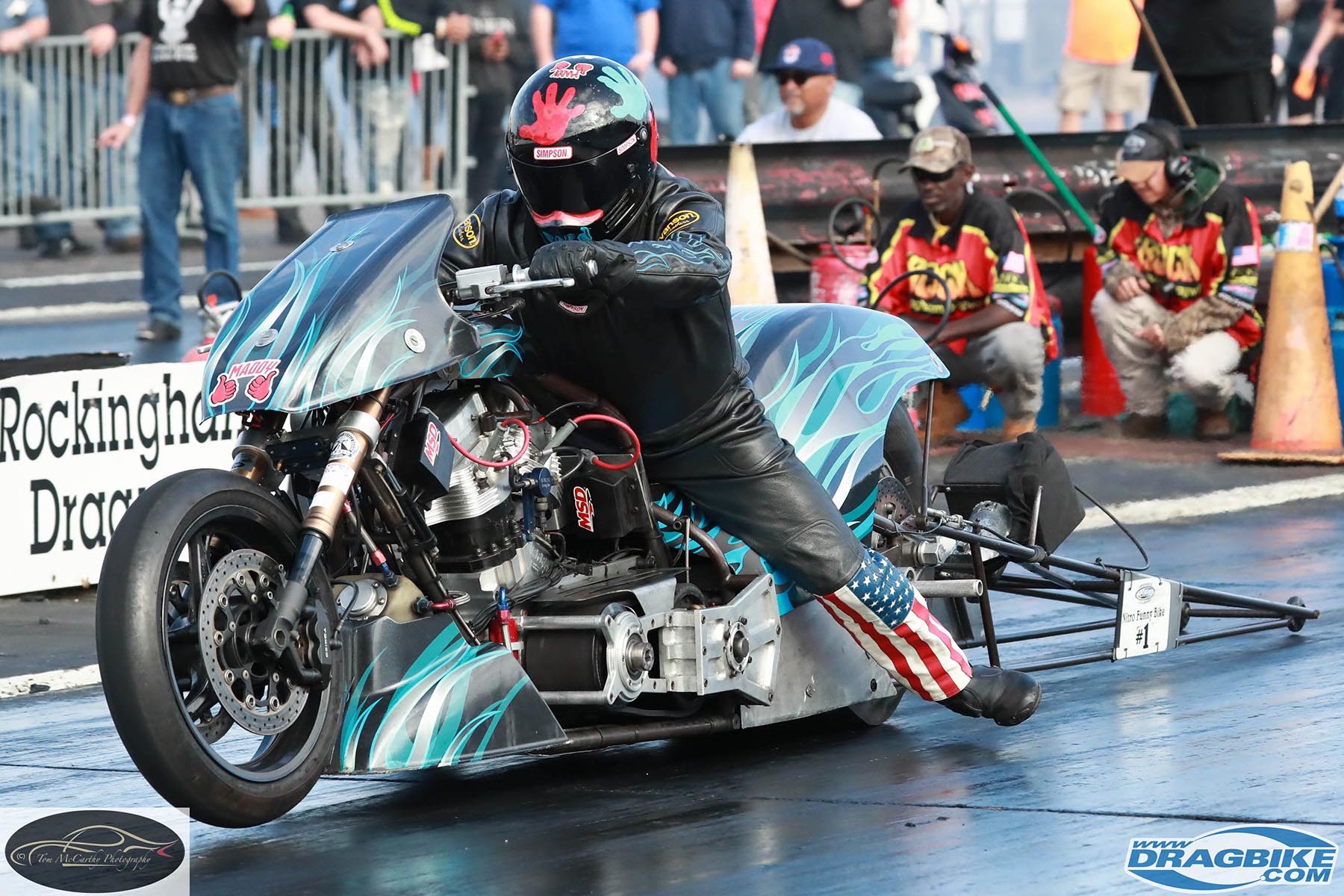 Now the time has come to be on-guard for better chain guards for motorcycle drag racers as a recent lesson has taught us just how damaging a drive chain failure can be. The sport of motorcycle drag racing has a wake-up call and this safety article is written for exactly that reason: to highlight the need for all chassis builders and racers to take chain guard fabrication a bit more seriously, before disaster strikes.

On Saturday August 21, 2021, at a sanctioned racing event, a nitromethane-powered drag bike suffered a broken drive chain during its pass down the quarter-mile. This is not the first time this has happened, but this is the first time it has happened with this level of catastrophic damage imparted to the chassis that this author is aware of.

Nitro Funnybike champion Chris Smith was racing during a qualifying session while piloting the Nitro Funnybike of Ryan Peery. He was in the left lane of Bristol Dragway and launched hard, looking good on his pass with a 60-foot time of 1.17 and a 330’ of .298. It’s important to note his previous 330’ was a .298 as well. In fact, the previous run was a 6.78 at 202 MPH, hot, straight & true.

The eighth-mile MPH numbers on the pass in question showed a 117 MPH; indicating power transmission to the rear wheel failed prior to the eighth-mile mile. From there, veteran racer Chris Smith had his hands full.

“Suddenly the bike just jerked and bucked like a horse” he recalled. “It started to skid as the rear wheel locked up, then it broke loose, then it locked up again. It was bouncing up and down on the soft big rear tire and I had all I could do to keep the bike upright. I had no idea what was going on back there.” Chris did an amazing driving job of keeping the bike upright and in his lane. Eventually, the bike came to a stop close to the finish line as emergency vehicles rolled out. 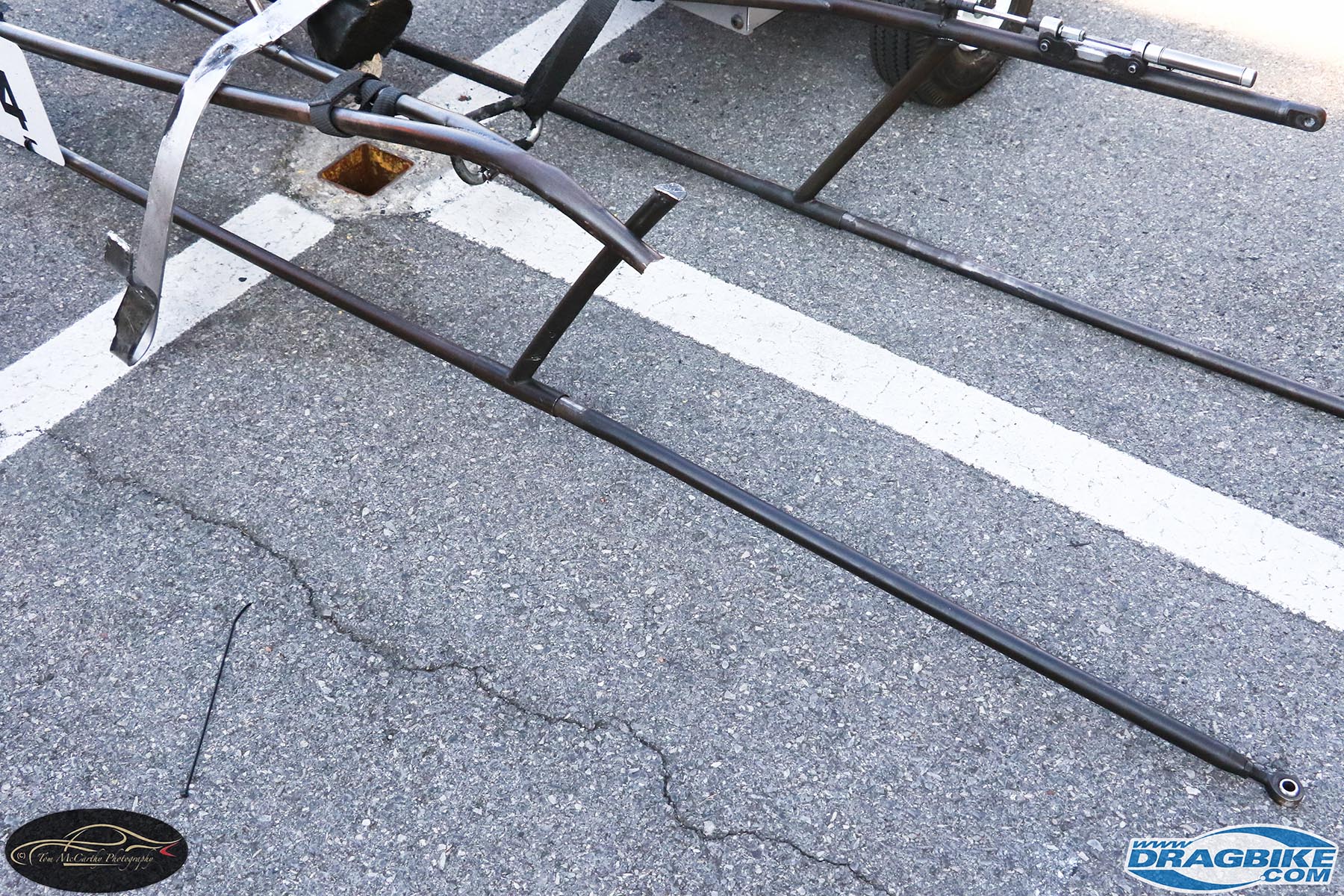 Bristol Dragway emergency services were there quickly and Chris did his job brilliantly. All parties performed perfectly as they should have. Thankfully, because this chassis was so well made and the driver did his job, those factors combined with the grace of God – Chris Smith was okay. The bike, not so much. 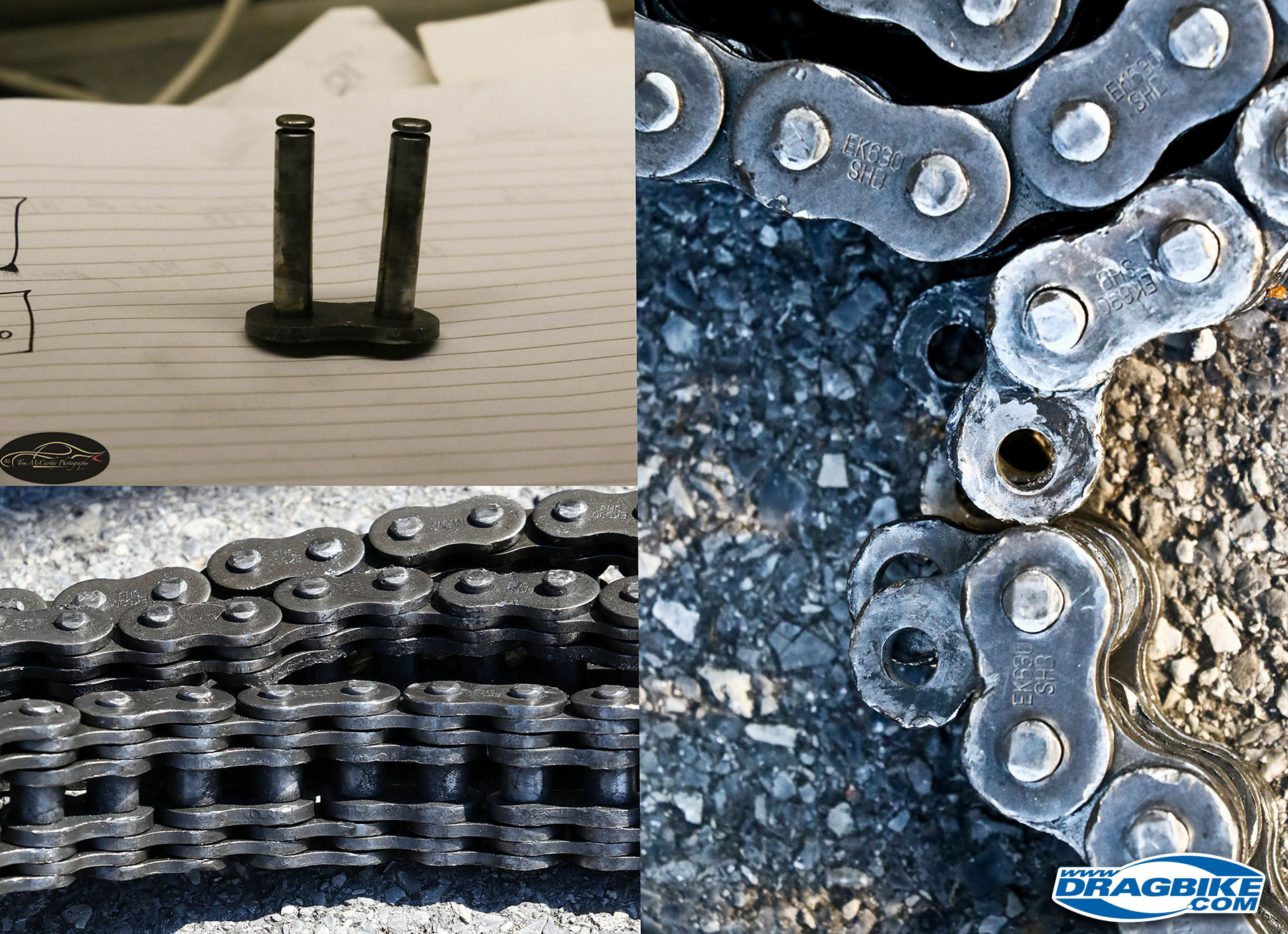 What happened was at some point after the 330-foot mark of acceleration, the keeper of the master link came of its retention placement. This allowed the side plate to come off and the master link to back out of the drive chain. The spread of the two link pins clearly indicates this as they are no longer parallel. 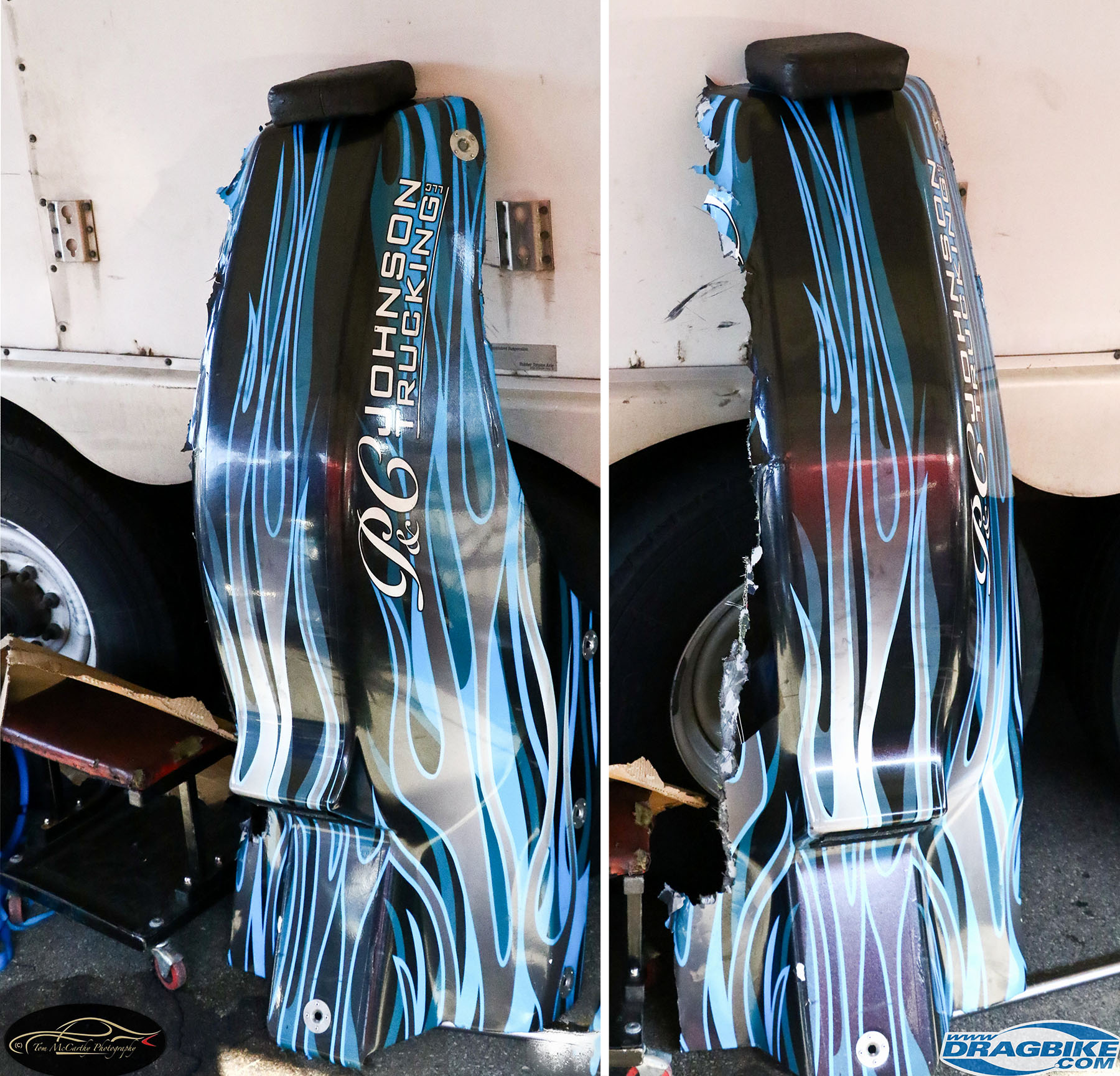 Once the drive chain came apart, all hell broke loose. The drive chain on a high horse-powered drag bike is a double-row chain, twice the weight, and is exponentially stronger than a conventional drag bike chain. 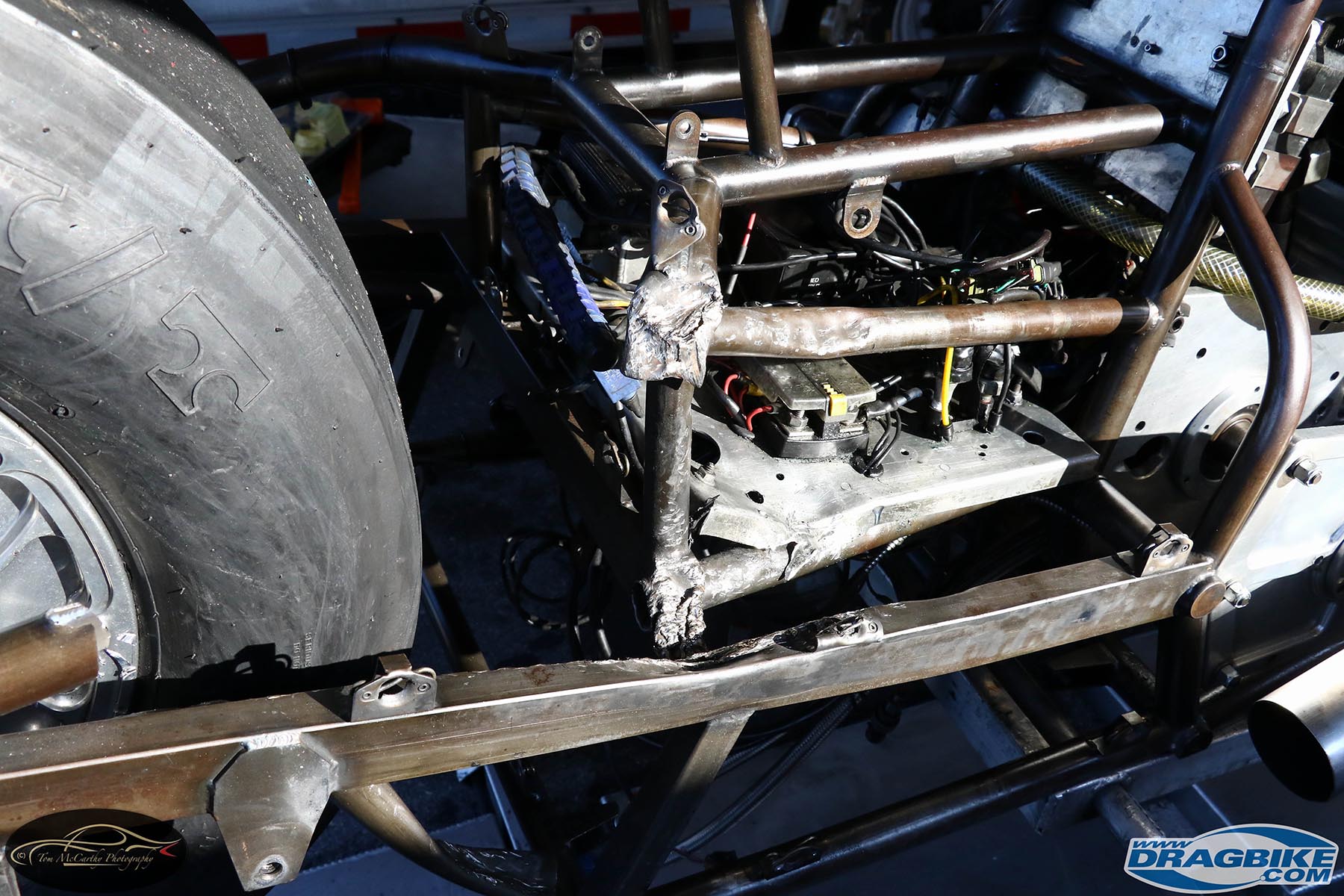 It weighs fifty pounds for 120 pins in length. Imagine a fifty-pound high-speed flailing chain whip with destructive power that will cut through almost anything on contact. 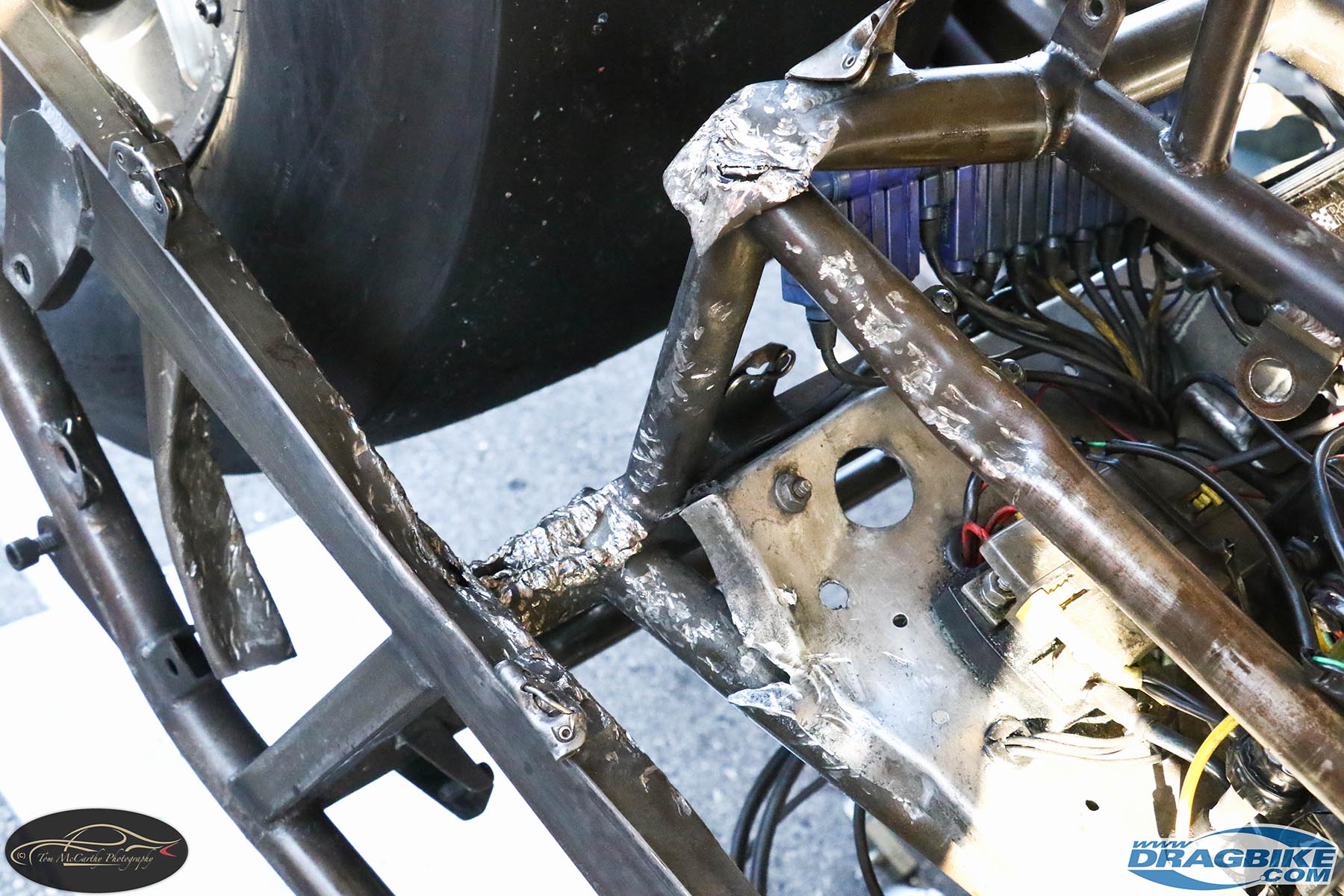 In this instance, the chain ripped off the entire right side of Ryan’s NFB rear section bodywork – the sizeable segment going airborne briefly. 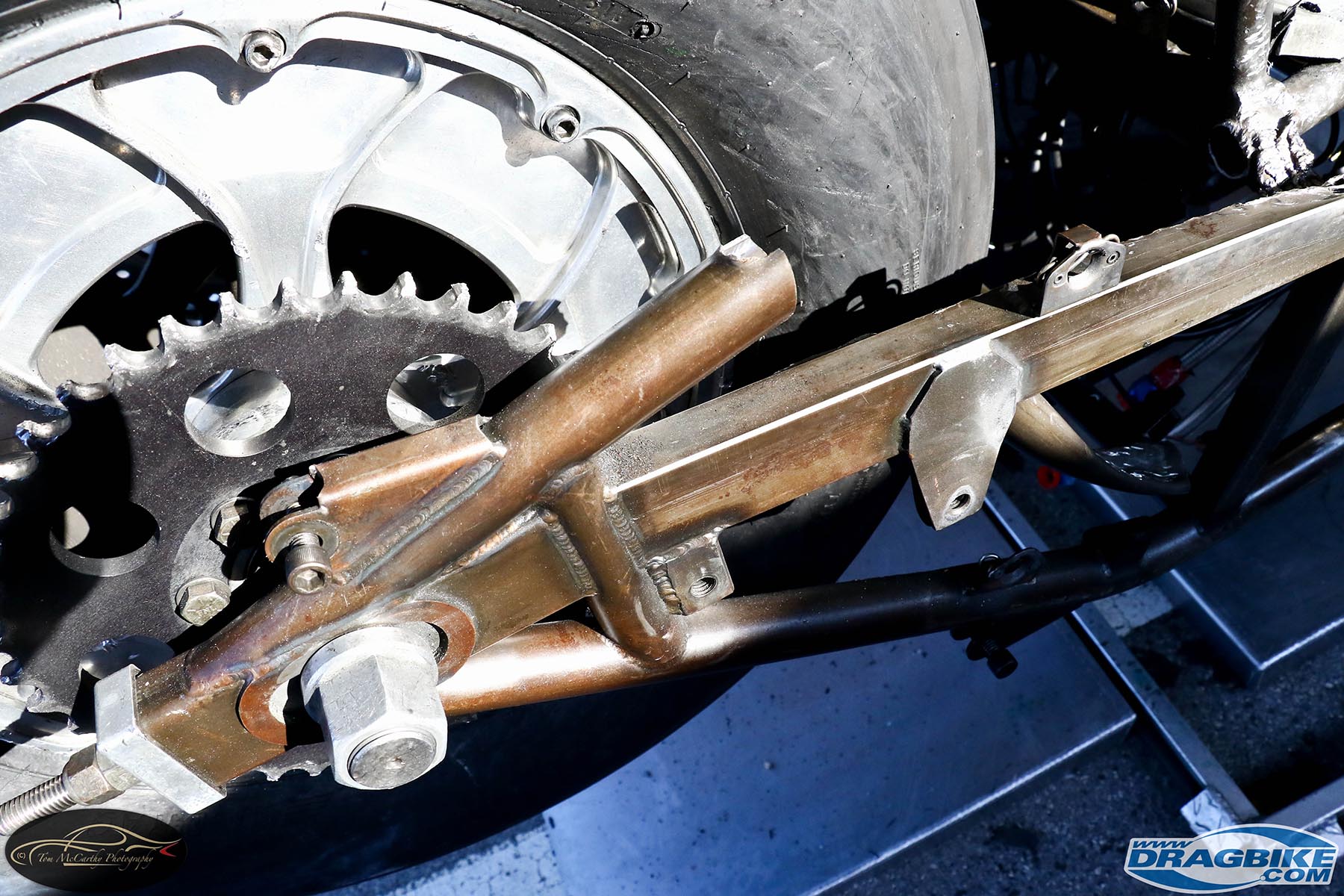 In the flailing process; the chain removed sections of chrome-molly tubing it came in contact with, tearing chunks right off the bike. Aftermath photos tell the tale best.

What is important here is that excellent chassis construction and placement of components, conspired to help keep the racer safe and his machine in a drivable condition. This was essential to help avert disaster. By examining the components, of this destruction, the lesson becomes self-evident for chassis builders and Tech Department personnel. 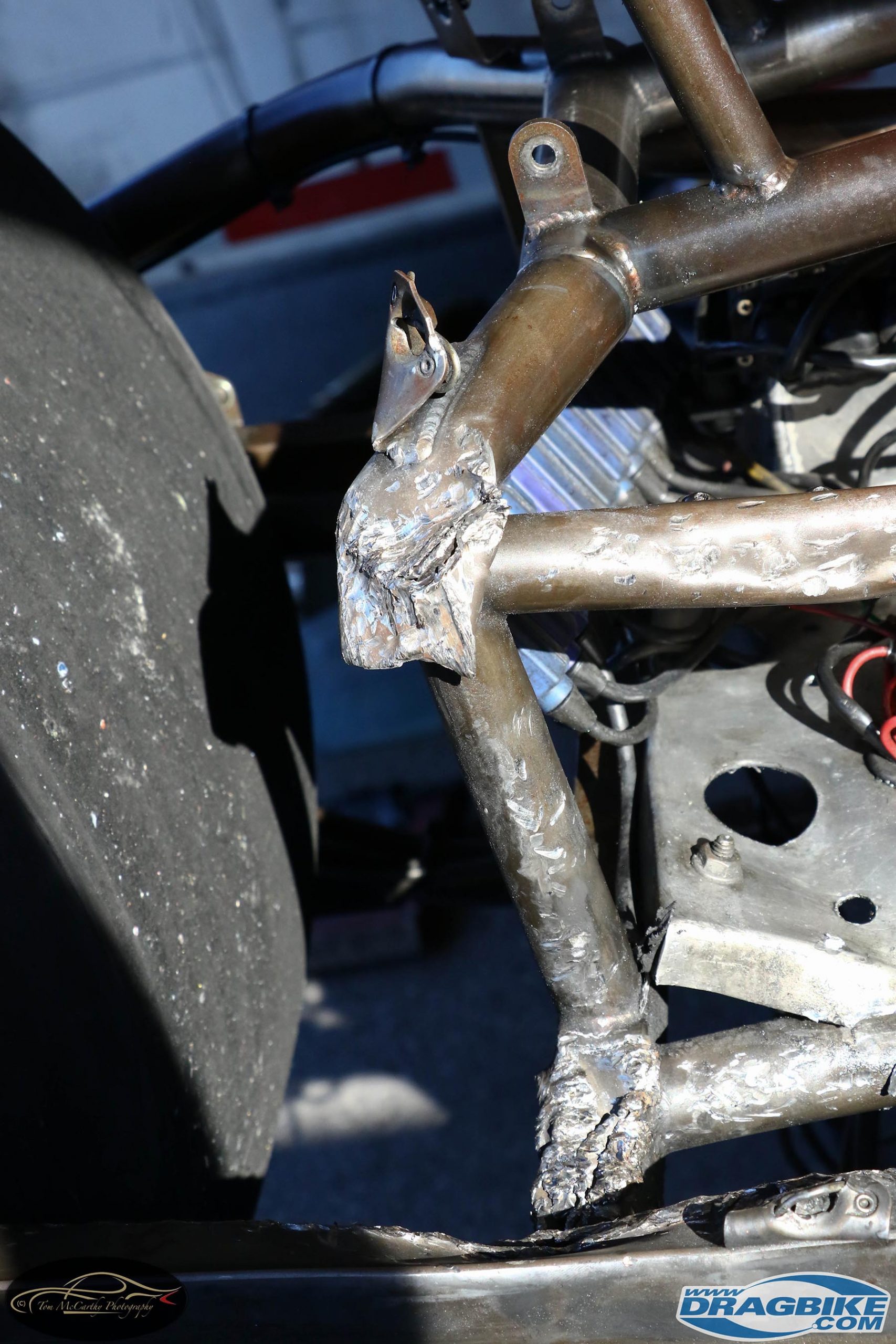 We here at Dragbike.com value all racers equally, worldwide. We want everyone to see this carnage and we encourage chassis fabricators around the globe to exchange ideas and collaborate to help keep each other safe.

Next time you build a chain guard for a drag bike – remember what it can do when something goes wrong.

Let’s be careful out there.
– Tom McCarthy