HomeRankings / AwardsBAMF - 2015Dragbike.com BAMF : Dustin Lee IS the baddest in the Land!

Dragbike.com BAMF : Dustin Lee IS the baddest in the Land!

Dragbike.com BAMF : Dustin Lee IS the baddest in the Land!

Year two of the Dragbike.com BAMF is in the books and this year turned out to be a monster for Dustin Lee! Dustin Lee has always been a fierce sportsman competitor at his local track of Cherokee Raceway Park and any sanctioned event he shows up at. But he came into 2015 with a mission, and that was to win the Dragbike.com BAMF. In 2014 Dustin finished the BAMF points in the 29th position having to miss a lot of races in the preparation of his first child, baby Harper. And Dustin wasn’t quiet about wanting to win! While his friends laughed every time he said he just wanted to finish in the top five, his actions spoke like a champion. He ran all three of the big sanctions, IBDL, Man Cup and NHDRO not missing a chance to earn points. 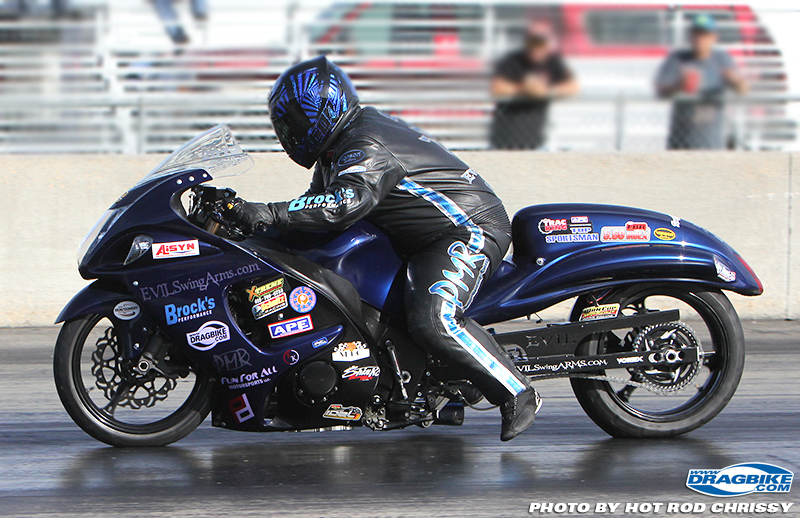 While teammate Ben Knight once again kicked off the year leading the points, it didn’t take long for Dustin to take the reigns from him and put them in a heated battle at the beginning of the season with Kevin Adams, Donnie Huffman and Shayne Proctor. By mid season Dustin had a firm hold on the points lead. He was starting to look uncatchable as Knight starting missing events and his biggest rival of Donnie Huffman was only running one sanction, AMRA.

And by September Dustin had accumulated more points than last years champion Jeremy Teasley by passing the 31 points mark with several races left. When Dustin rolled into the final event of the year, the Man Cup finals, he was unbeatable! Despite having the championship tied up and the trophy with his name on it already, we has aiming to hit 50 points to finish off his year of domination. Unfortunately for Dustin the event was ended uncompleted which denied him his 50 point goal. He ended the season with 46 total points accumulated by 11 wins, 7 runner-ups and 4 championships! This year Dustin won more rounds than some racers will win in a lifetime of racing.

Donnie Huffman who ran all of the AMRA events accumulated 32 total points to take second place in the Dragbike.com BAMF standings. Unfortunately for Donnie, he won a few races at AMRA that could not be counted because they did not meet the 16 bike minimum. Had those been counted we would have seen a real battle at the final event of the year. Donnie showed up in South Georgia Motorsports Park knowing he could not win the BAMF but still wanting to show he was a fierce competitor outside of the AMRA races. He took the V-Twin win on Saturday ending his 2015 BAMF season with 8 wins, 4 runner-ups and 3 championships!

With these kind of numbers, there is no disputing who the best sportsman racers in America are! Hands down these guys worked hard and deserve our respect on the track!

The Dragbike.com BAMF series will continue in 2016, but will being the 2015 BAMF be a curse for Dustin Lee or will he come back fighting for another win? Stay Tuned to Dragbike.com to find out. 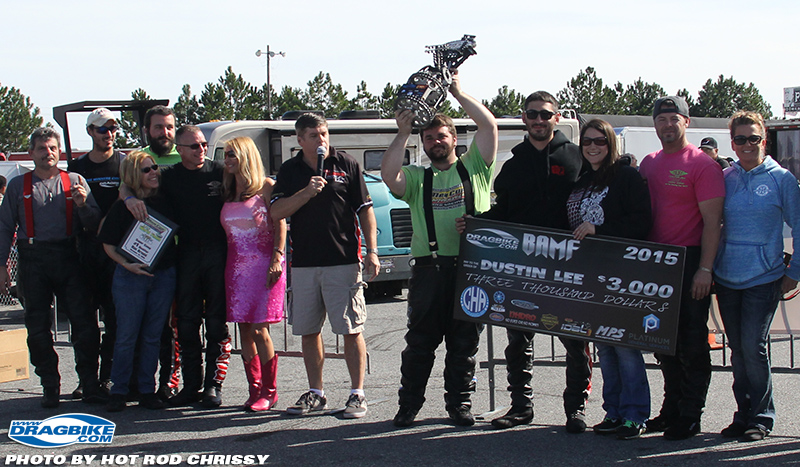 And we can’t thank our 2015 sponsors enough for making this program happen and getting more racers to more events to help grow our sport! Thank you to Ralphie Navarro of Platinum General Services, Dan Rudd of MPS Racing, Jason and Chris Miller of IDBL, Brian and Niki Welch of NHDRO, David Poague of Interstate Specialties, Dimey Eddinger of DME Racing, Guy Caputo of Tiger Racing, Dave Conforti of Worldwide Bearings, and Eric Hochstetler of MTC! Special thanks to Tom and Amanda Patsis of Cold Hard Art for the creation of our unique trophies!

If you are a sportsman and you need parts, please call our sponsors first! They are the reason Dragbike.com can run these sort of programs!

As 2016 approaches there is only one requirement to be in the chase for the Dragbike.com BAMF, put the Dragbike.com decals on your bike! If you need decals, send an e-mail to editor@dragbike.com with your address and we will mail them to you. Pretty easy!