Fontaine Sparrow is one of the few hired riders in the sportsman category, with two paid rides over the last ten years. Currently, he is the rider for Freddie Binger’s, Fast Bike Cycle Shop. They campaign a Top Gas and a Pro Mod bike at select events. FBC is a full-service shop focusing mostly on drag bikes,  although they also do engine work for a Nascar Truck team. Freddie gets a lot of business from performing well at the races. And that’s where Fontaine comes in, he rides the team bike while also being the test rider for completed work. 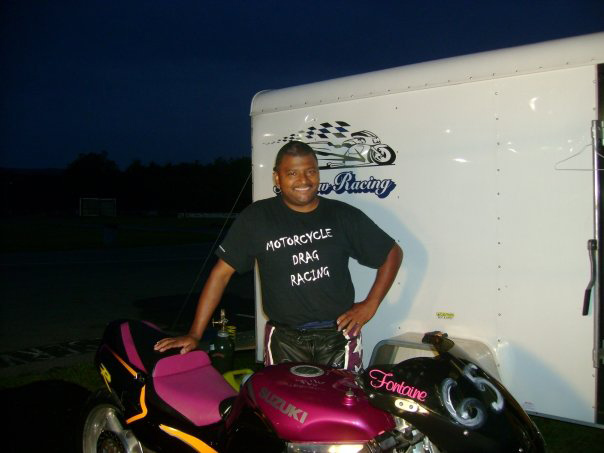 “I absolutely love this role because I get to ride a bunch of different bikes in different combinations,” said Sparrow. “One week, he may have me on a big tire drag bike with a 1-2-3 and the next job may be a street legal Busa with a dry nitrous kit. That being said, we also race. We are definitely are on the same page when it comes to racing. I don’t care about chasing points at this point in my career. I’ve done that since I was 16. These days we just go wherever we get a hankering to go. If Piedmont Dragway has a big event, we’ll go there because their drag bike culture is top notch. That being said, if VMP is having an all bike event we’ll go there. It’s kinda hard to run points at one track while taking a week off here and there.”

The cool part is, not only do we hit some featured events, we’ll just take off and go to a track that we’ve never been to and make some new friends while competing with them. Brainerd Motorsports Park (not Minnesota) in Ringold Georgia has some super nice people there. The same can be said for Crossville Dragway in Tennessee and the I64 Motorplex in Owingsville, KY. I am an Over-the-road truck driver by trade and average 130,000 miles a year so, driving 8 hours to race is nothing. In fact, a while back we made a trip to Walt Timblin’s shop (Baxley, GA) to pick up a chassis and drove straight back to Central Virginia. That was a twenty-one hour round trip. We actually did THAT twice. 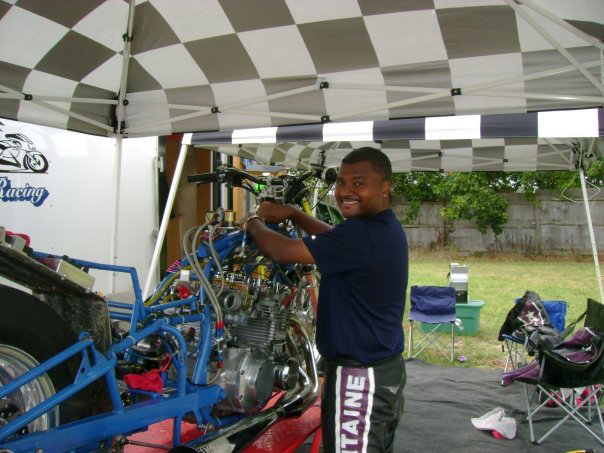 What are your plans for the 2018 race season?

More of the same. However, we do plan to focus more on the hot 4.60 classes in the XDA, Man Cup series, and the IDBL sportsman event.

The 4.60 class has great fields and we look forward to getting to mix it up with those guys, so it’s a no-brainer for us to go in that direction. I must say, my state mate Boo Brown is a tough competitor and did a masterful job last year on his way to becoming the “FO-Sixty King”.  We have a Pro Mod Kawasaki that is a solid 4.30 machine. In fact, the very same combination we’re running has been 4.21 with Billy Vose riding Darryl Hollins’ bike. That being said: 4.20 and 30’s won’t get the job done when Eric, Tracy and those guys are laying down 4.0’s on the regular basis. We will have to figure out the best way to detune the bike, but right now we are just excited to be part of the most exciting class in motorcycle drag racing since outlaw pro street.

I have some great partners for 2018. I will again be flying the Frito-Lay colors and Fast Bike Cycle. I am Super excited to welcome ARO customs to the FBC Sparrow Racing family. 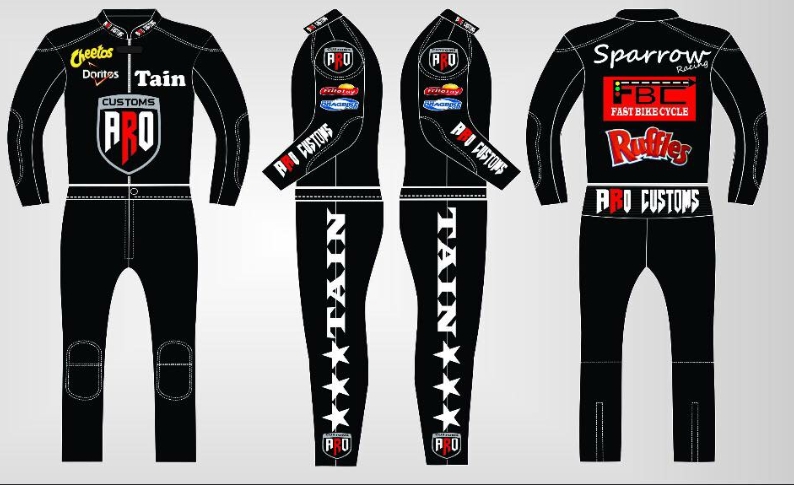 DBC: How did you get started racing?
My father and uncles raced, so that gave me the initial race fever. As I got older you realize your family and all your friends are at the race track! It’s a great community to be a part of.

DBC: Who are your heros or influencers
In the hero department, I guess most kids’ heroes are their dads.  The same can be said for me but these days,  my hero is my son Senior Airman Zachary Sparrow (USAF). He’s currently on orders at Travis AFB in the Bay Area of Northern California and is well on his way to being a better man then I.

As for racing, the heroes I had as a kid are the usual suspects for someone in my age group. Terry Vance, Larry McBride, Superbike Mike, etc. The weird part is when you become actual friends with them, the dynamic changes a bit, but for the better. There was a time when I had Dave Schultz posters on my wall as a teenager.  Fast forward to 1997, and he and I are riding bicycles together in Maple Grove, PA down the road from the track before the race. Some people don’t like getting old, however, I have embraced it and enjoy looking back. Seems like yesterday I was at the US Nationals in 2001 and asked George Bryce “How’s the baby?” – Well, that kid got married last month.

I got off on a tangent, but the racer that I admire the most is Mike Konopacki, hands down one of the best sportsman racers of all time. 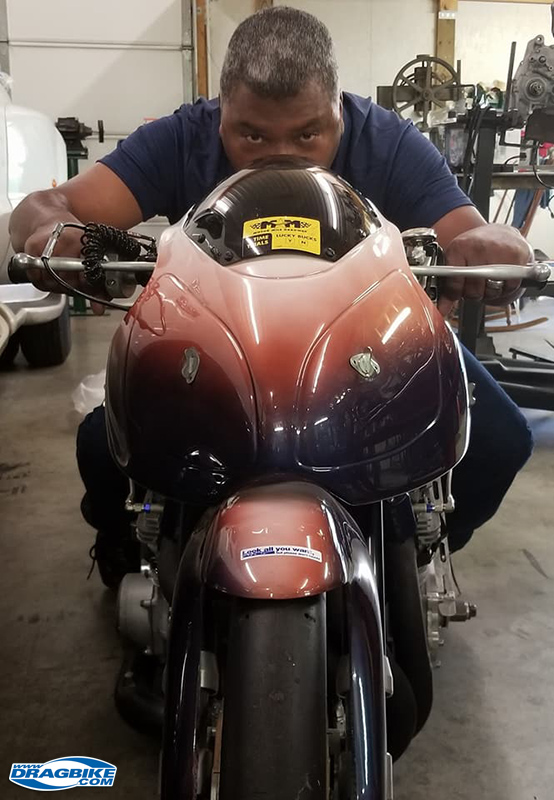 There was a time when I was riding for Phil Spinner’s “Hustler Racing”. I was fresh out of the Navy from Operation Desert Storm and had just got my first hired rider gig. The bike class at my home track (New London Dragstrip) was massive. After 3 rounds of qualifying, they actually pulled the top qualifiers and ran a “Quick 16”. The other class had another 20 entries. Somehow I lost track of time and was over on the fence line signing some little kid’s shirt and then I hear the bike owner, Phil, yelling TAIN! TAIN! TAIN! I turned around and they already had the bike in the water. I had to run up there, put my kill switch on and make the pass. I guess you had to be there, but it was so funny and I was so oblivious. Ohhh to be in my 20’s again.

I really wanna go to one of those tracks where they run bikes against cars!  I’d really like to eat a meal with Victor Martinez! I’ve spent time with him and the beautiful and talented Lea “Dream Catcher” Martinez, and Vic and I plan on going to “Georgia Bob’s” someday and let the silverware do the talking! 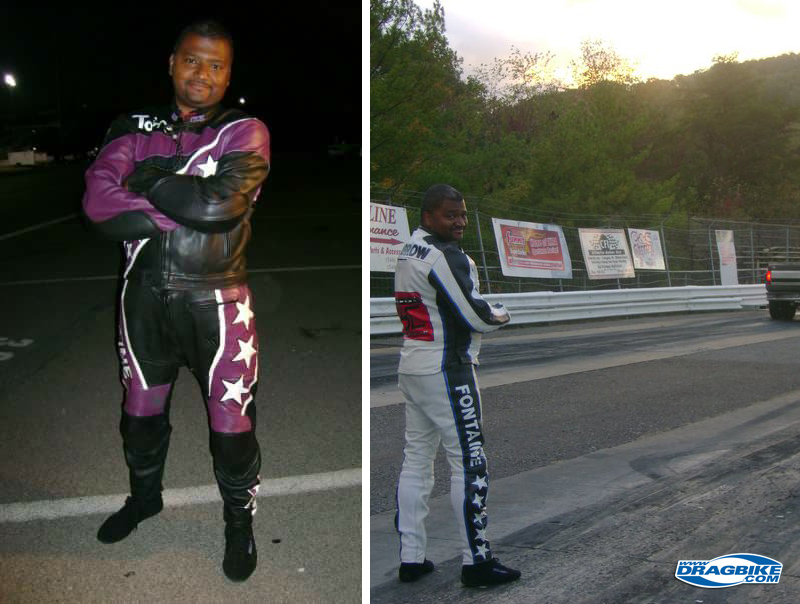