As the summer months are now upon us, as of the first week of June 2020, things are starting to heat up in the motorcycle drag racing world here in the USA. While most drag racing facilities nationwide began opening up for private testing in the COVID-19 Pandemic era, in most cases the openings were partial in the month of May. A few tracks were open for business as usual, but most were only functioning for private testing only. This began to change in June of 2020.

This weekend should have been a full-blown NHDRO event, however, pandemic restrictions in Indiana have limited the event to a Test and Tune event with a limit of 100 people on the property. NHDRO is expecting that their next event on June 27-29 will be a full race with no limitation on race entries. Spectator participation has yet to be determined. Get more info at www.nhdroracing.com 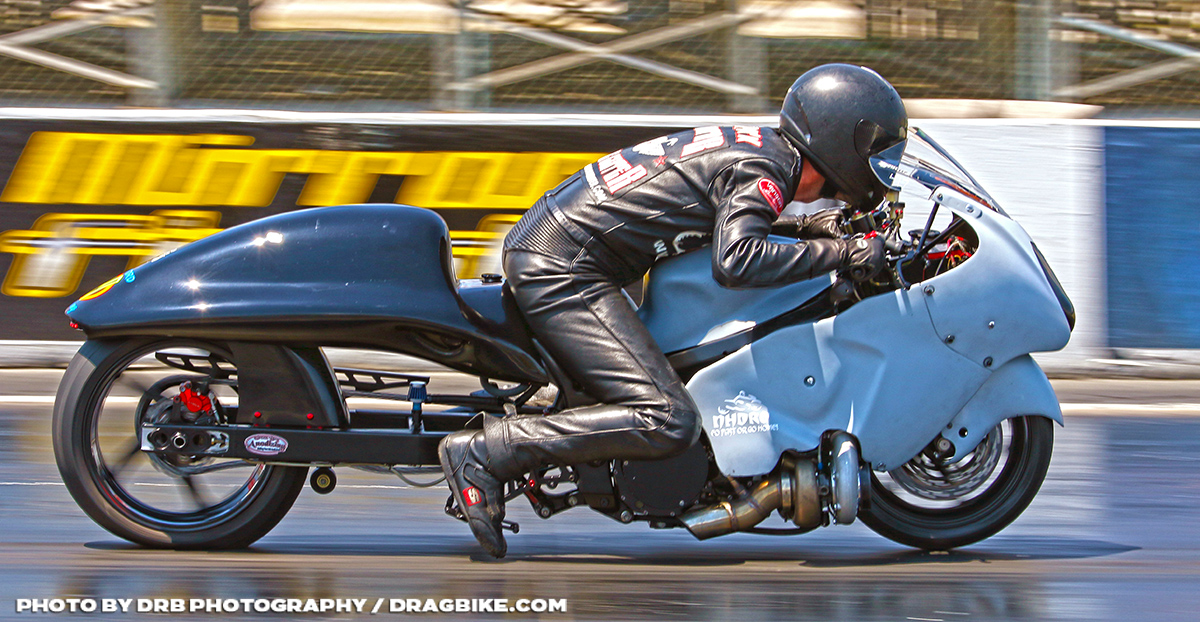 Also this weekend at 710 Dragway, in Rowland, NC., promoter Paul Watson launched an event he calls the “All Harley World Shootout.” Competition classes will include Extreme Bagger, Draggin Bagger, 6.90 and 6.20 Index, Street ET, Quadzilla Wars, and Outlaw Grudge. This event will also host some match racing between the Pro Fuel nitro Harley teams of LSR and Kirby Apathy. Other Top Fuel Harley teams may be present making passes too as there has been no Top Fuel action since the NHRA Arizona Nationals in February, and many of the Top Fuel motorcycle teams are getting restless. 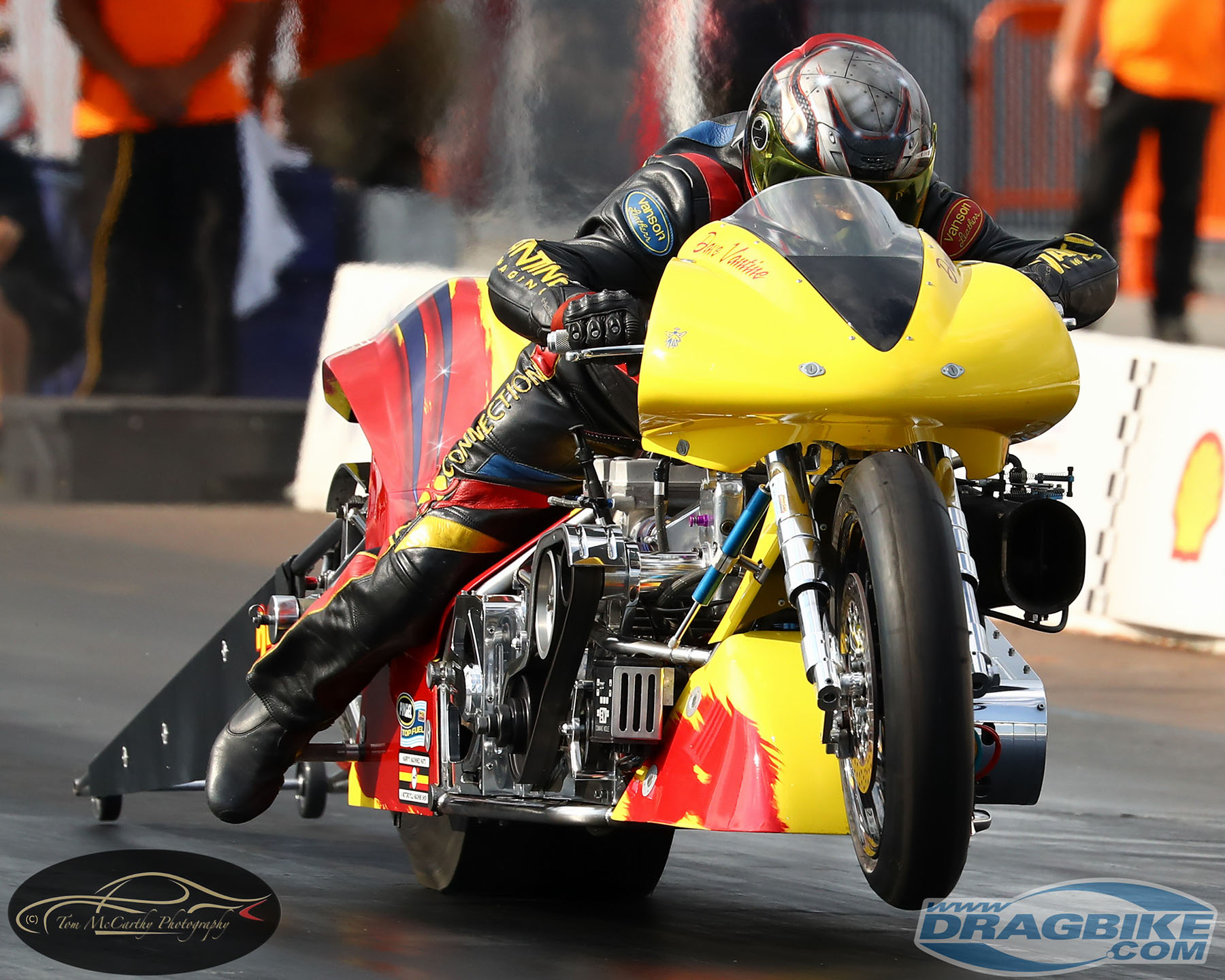 To add to the discomfort of the thundering Top Fuel motorcycles, on May 30th, the announcement was made that the annual Night Under Fire event set for August 8th, has been canceled at Summit Motorsports Park in Ohio. This event was to feature this year, for the first time, Top Fuel motorcycles, which at night would have been a great treat for the fans at “America’s Racetrack.” Larry McBride, Dave Vantine, Mitch Brown, and Sam Wills were slated to appear, with other Top Fuel motorcycle luminaries under consideration. This was a great disappointment for thousands of Top Fuel motorcycle fans who are now hoping 2021 will be the year they get to see ‘The Spiderman’ and company light up the night. 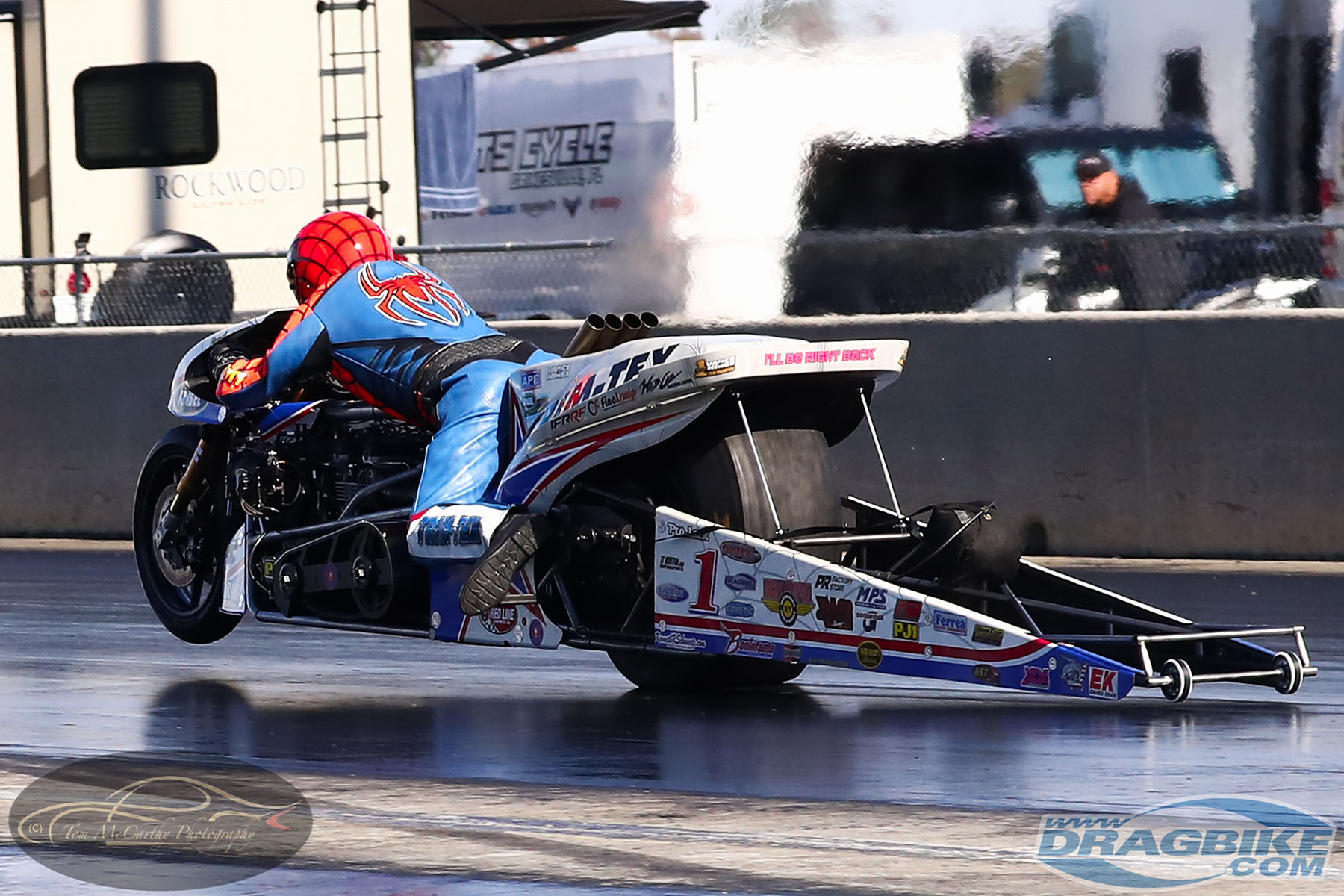 For Larry McBride personally, his last pass on his Top Fuel bike was November 25, 2019, when he defeated Ian King of the UK with a 5.929 for Spiderman and 5.924 for Ian, with the win-light lit for team McBride. Larry took the win on a hole-shot, .199 to .212 were the respective reaction times in a great drag race.

The Kings of Grudge serious last May event also fell victim to Covid-19 restriction where they had to turn their event into a limited Test and Tune at the last minute. But on June 12-13 they will be holding the Hunt Fest at Huntsville Dragway for the fastest Grudge Bikes in the country. Many big names are already locked and ready for the competition For more details, visit www.kingsofgrudge.com 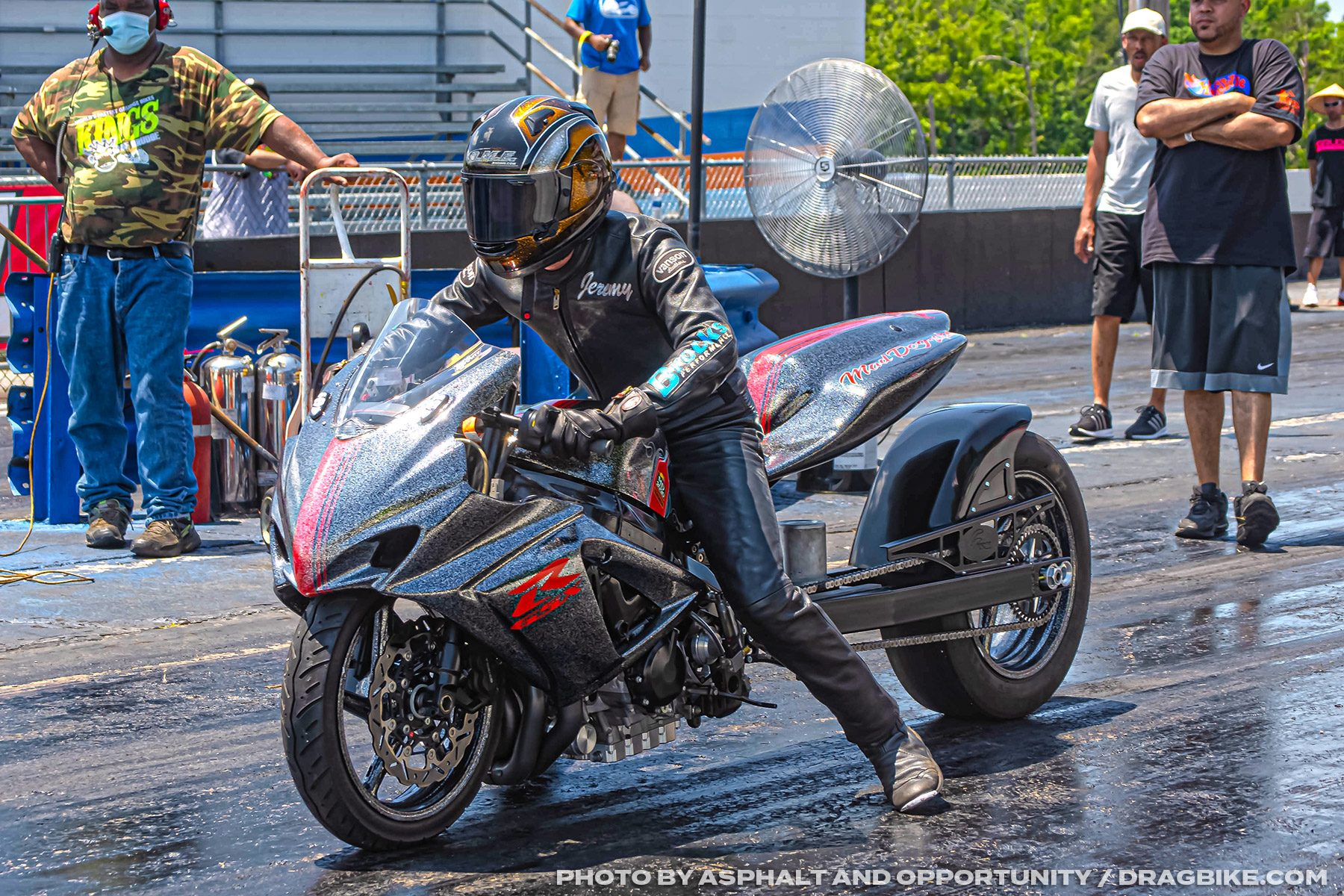 As the month of June unfolds, the Southeast Drag Bike Association will host race #2 of their inaugural season at Crossville, TN on June 19th and 20th. They had a great first event in Ringgold Ga. To start off their year and they are hoping for a good turnout for this next race. Sonny Vick and Brian Dale, who head-up SDBA, have a fledgling sanction under development and they are hoping this race goes as well as the last event, if not better. For details on this event, click here. 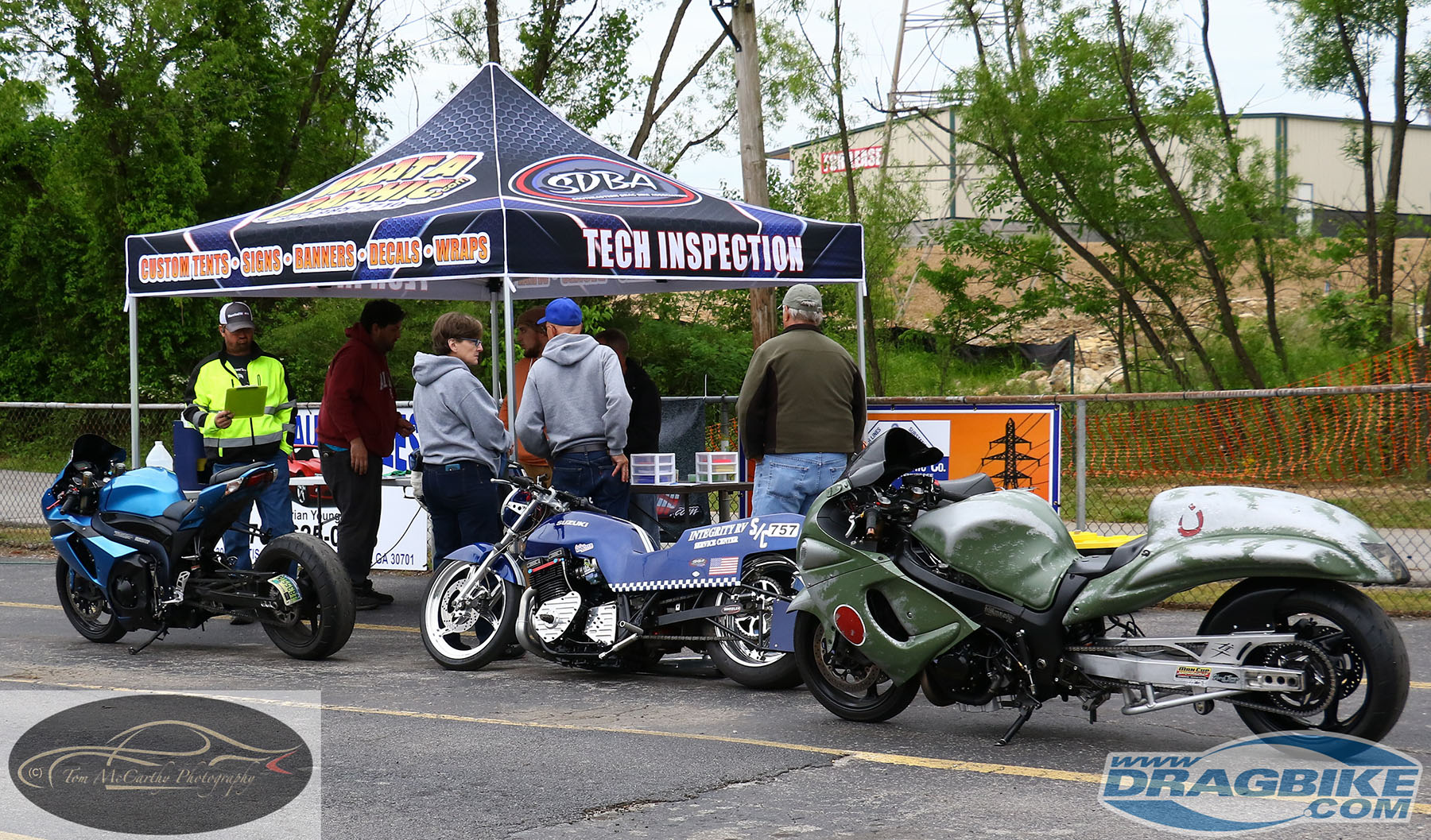 On that same weekend, Roger Edgerton, who is the frontman for new sanction “Hog’s Gone Wild” has contacted me and due to circumstances beyond their control, on June 3, Wednesday evening they were notified that the East Vs West Hog’s Gone Wild event, set for June 19-20 has been canceled. The race is now officially moved to Reynolds, GA, for the same race dates. “I know this is hard on us all, but at least we have a place to race on the same weekend. Silver Dollar Raceway stepped up and was there for us. I hope everyone can still attend.” For details on this event, click here. 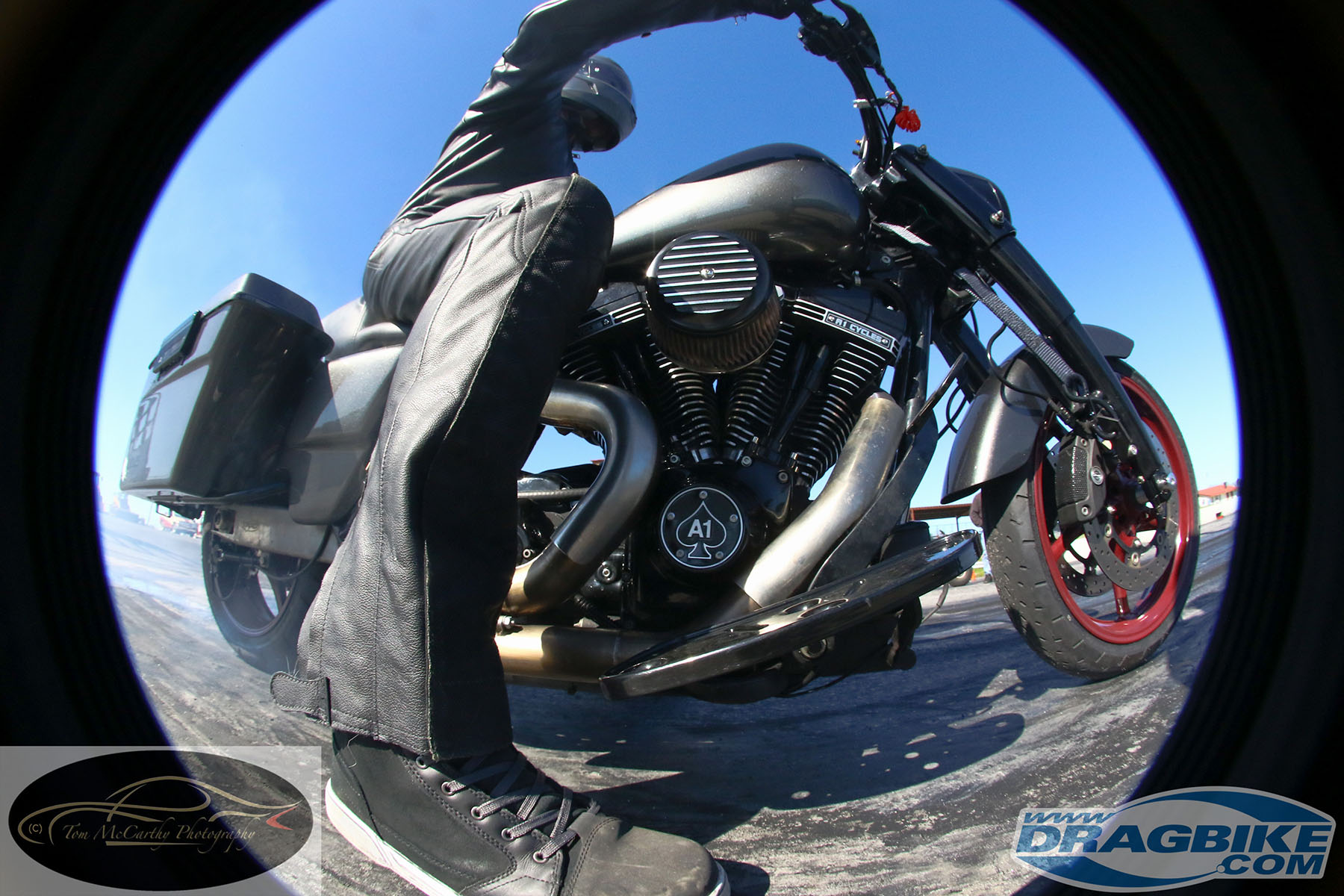 Also happening on the weekend of June 19-21 will be the three-day event, hosted by the XDA at Maryland International Raceway (MIR), “the XDA FuelTech Superbike Showdown.” The Xtreme Dragbike Association is excited to unleash their first event of 2020 and drop the hammer on this big race and get this party started for the season. Their first two events, April 24-26 and May 15-17 were scrubbed due to the complications of the COVID-19 Pandemic. 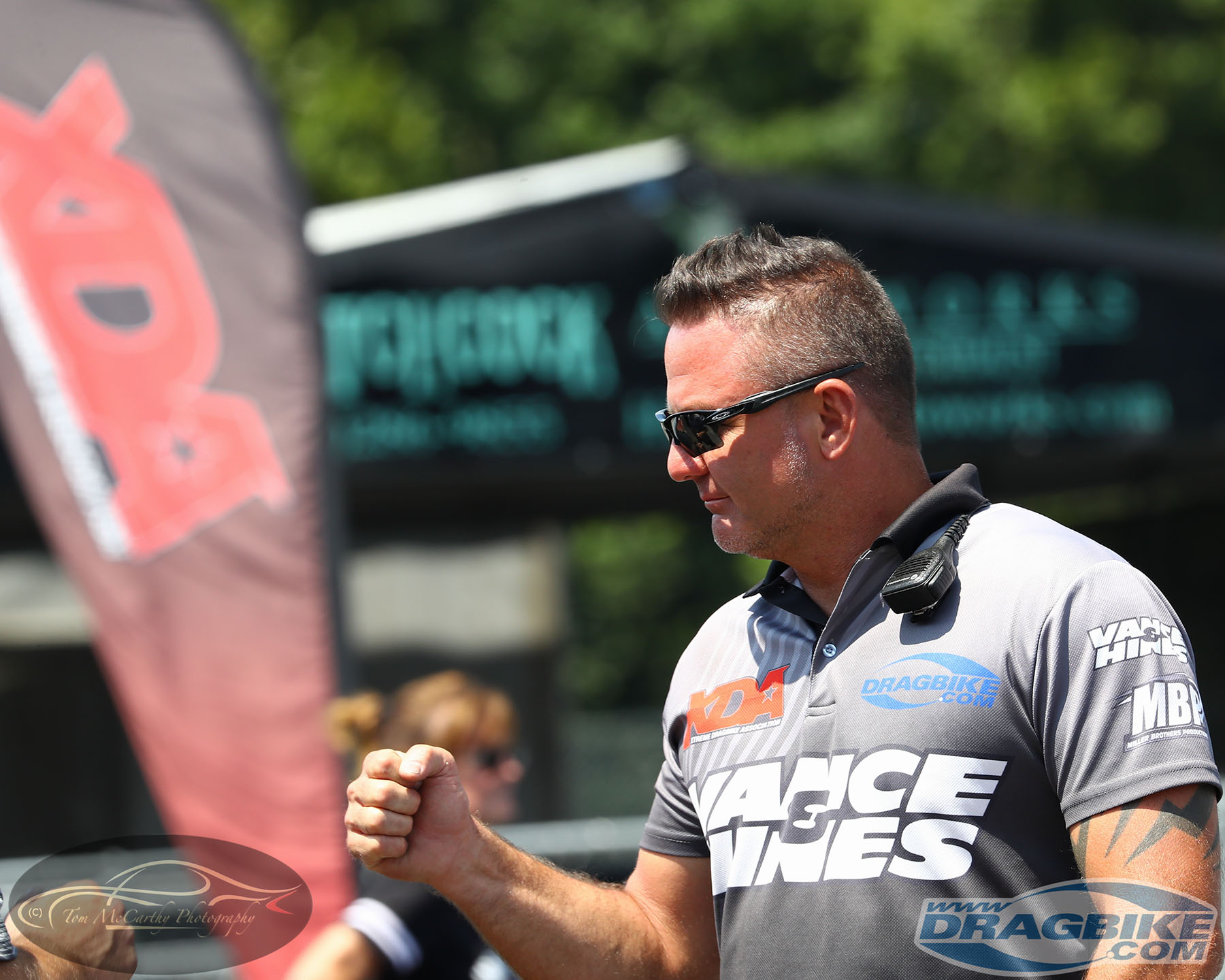 But now that the racing facilities operational green light is lit to resume operations, the Miller Brothers Productions sanction is eager to begin motorcycle drag racing operations. The world’s quickest and fastest Pro Street motorcycles will be pushing the envelope that weekend looking to see who can get back into the 6.30’s or better the number this year. After an unnatural lay-off of many months for motorcycle drag racers, it is expected the XDA event will be JAMED with hundreds of rabid racers, and the MDIR staff are more than capable of handling whatever the racing community brings their way. www.xdaracing.com 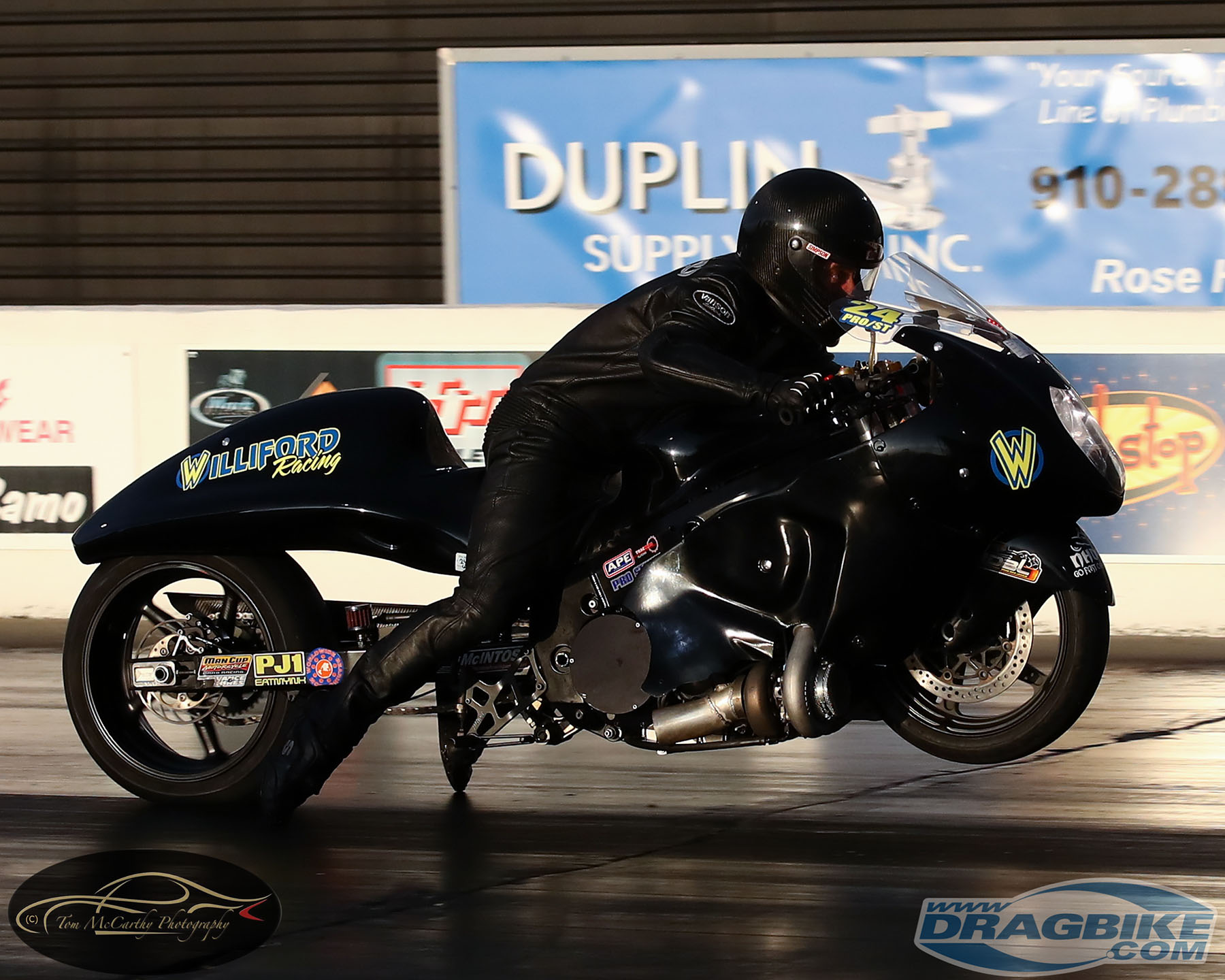 As for the “All Harley” racers, their much-anticipated event of June 27-28 at Beech Bend is canceled and there are no other All Harley events for the month of June. AHDRA is due to be back in action July 3-5, for the first All Harley Drag Racing Association event since 2012. This race is set for Cordova, IL, and will herald the much-awaited return of the AHDRA, which is now under new leadership, headed by Bill Rowe, of PA. Bill is a veteran of decades of Harley drag bike racing and is doing all he can to see the AHDRA return to its former glory years. (www.). Also July 31-August 2: AHDRA returns to Rockingham Dragway! Get more info at www.raceahdra.com 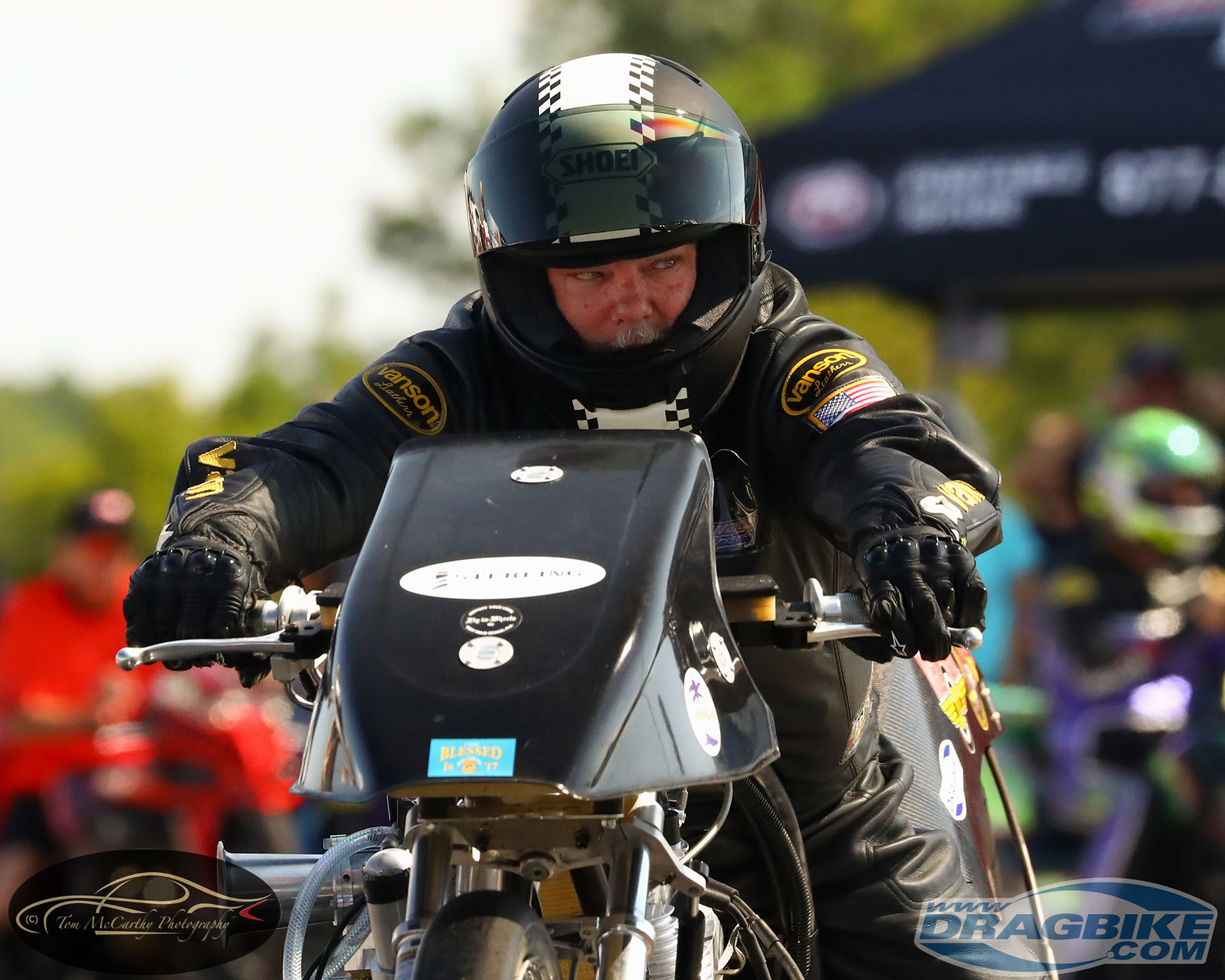 Adding to the Harley racing scene, the AMRA also has no event for June but is looking to be back on track July 25-26 at US 131 Motorsports Park, in Martin, MI. The American Motorcycle Racing Association and it’s racers are chomping at the bit, to get back to normal racing operations. Please visit the AMRA site for details 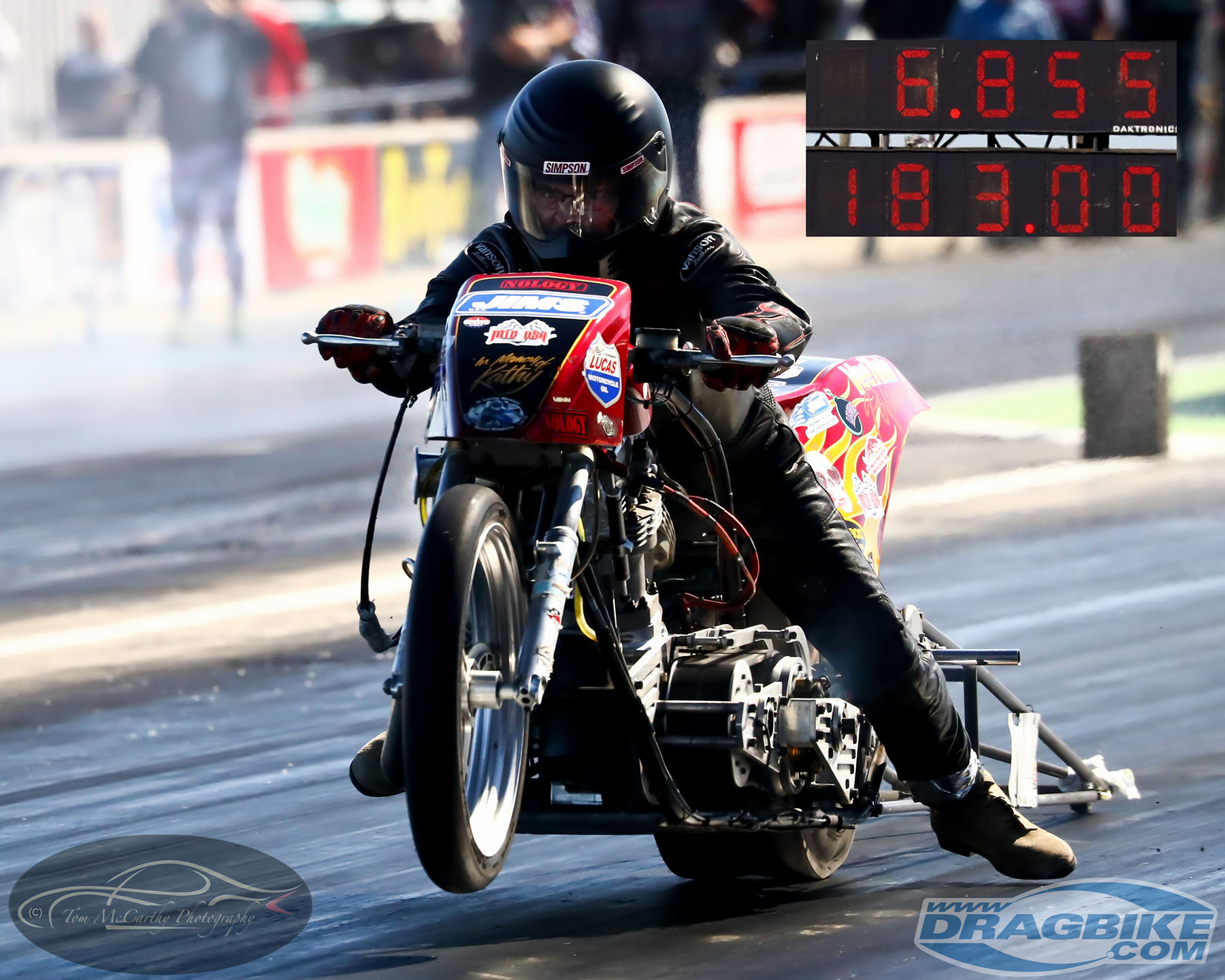 The Man Cup motorcycle drag racing sanction is ready to rock with its first race of 2020 due to launch on July 10-12 at Dragway 42, in West Salem, Ohio. Their first two events of this year were canceled due to the Pandemic, just as XDA’s first two races were victims of state-mandated shutdowns. Man Cup will have announcements prior to the event, please be sure to watch for them on their website at mancup.info. 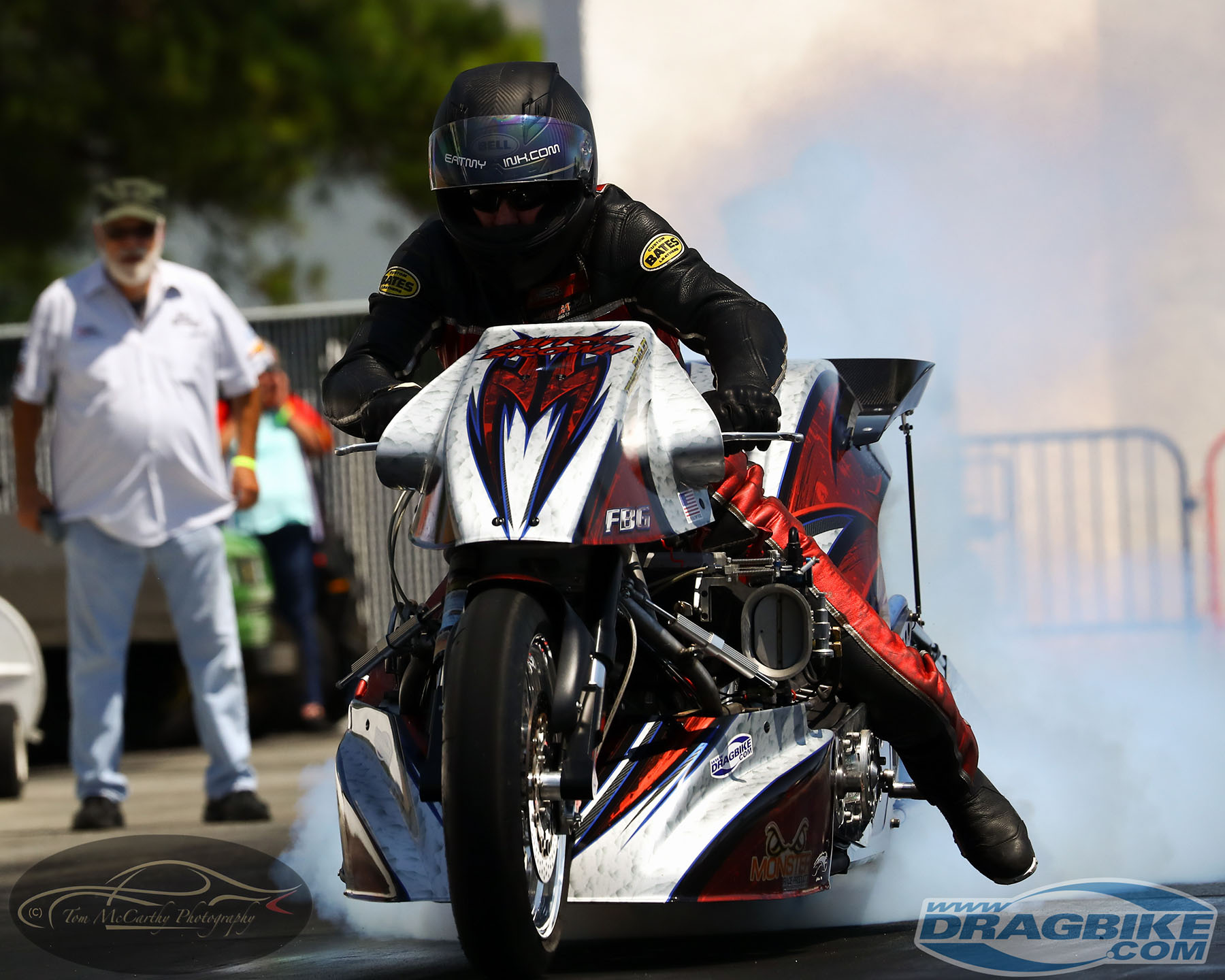 Be sure to monitor the sanction websites of your choice and keep an eye on Dragbike.com for future developments. Event dates are likely to change the rest of the year.