Mark Drew dropped some quick passes on the Top Fuel Motorcycle field to earn victory in the opening round of the ANDRA Drag Racing Series.

Drew however expected more out of the nitro twin following his defeat of Mark Ashelford, 6.65 to 6.75, after an earlier 6.48 pass.
“The bike was really good, we ran the 40, but I’m still at a loss as to why we ran a 60 in the last one. I’ll have to go through all the data tomorrow and work it all out,” he said.

“I’ve normally got my finger on it, when something happens I know what I’ve done. I might need a bit more timing and bit more fuel in the first stage. When I got to the end I was pretty surprised we only ran a 60.”

Ashelford came through for an emotional Top Fuel Motorcycle victory on the second night of the event. He ran a 6.58 to defeat Chris Porter who frustratingly crossed the centre line.

Ashelford said he was more than happy with the win after finishing as runner up on Friday night, dedicating the win to his mother.
“My dear old mum recently passed away so this weekend was for her,” he said.

“Last night I had a shakedown and it was my first two full passes in a couple of years. Tonight I had a hiccup in the seeding round and was lucky to get in the field. I faced Drewy again who I raced last night for the final and then Chris Porter, he’s not the Australian champ for nothing so I really had to put my A cap on.” 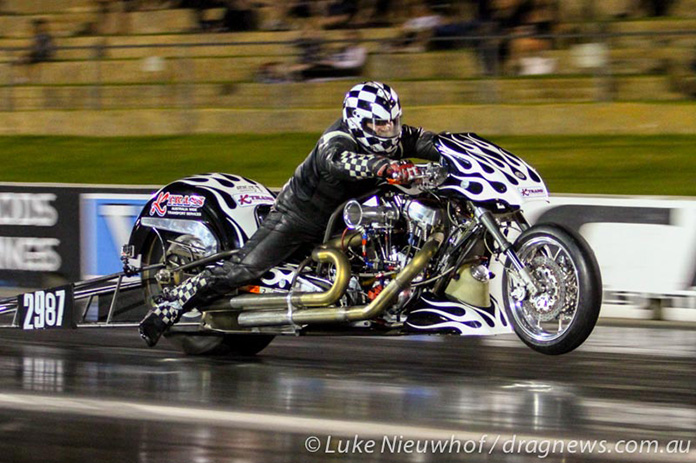 Mark Drew turned in some thundering passes on the K-Trans nitro Harley including an elimination round 6.48 that was underneath the national record for the v-twins. He defeated Mark Ashelford 6.65 to 6.75 in the final round. 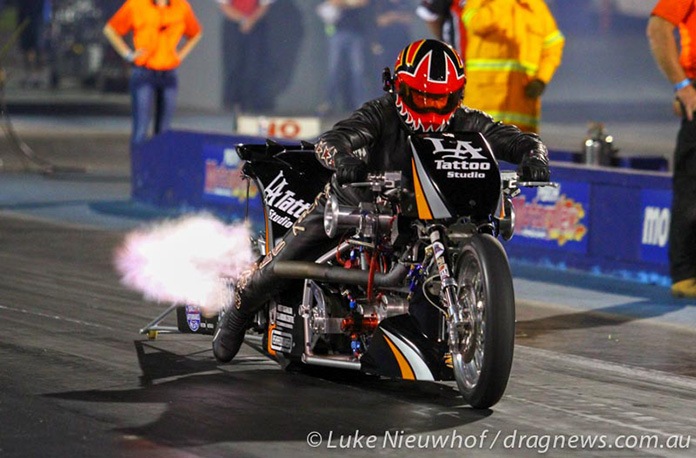 Mark Ashelford’s return to racing in Australia was quite successful and the nitro flames out both sides of the Attitude Racing bike were spectacular. 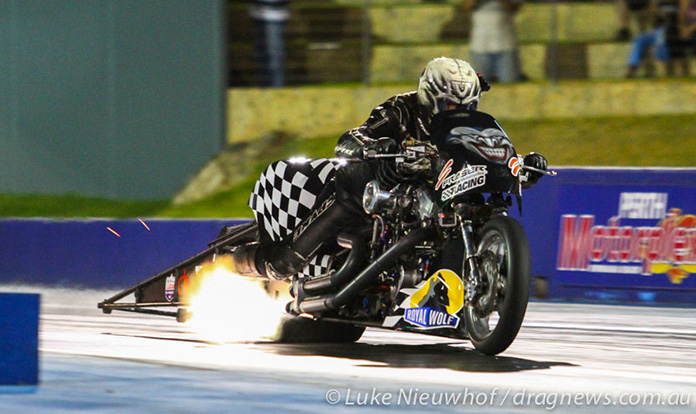 Chris Porter missed making the final but a B Final win ensured he still began his championship defence in okay fashion. A 6.91 in the final got by Greg Durack. 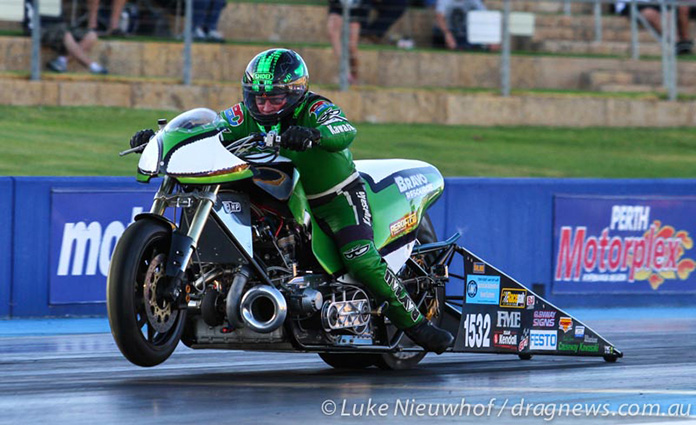 Greg Durack’s perfect winning record in Top Fuel Motorcycle stayed alive when he defeated Dennis Grant in the elimination round but Porter brought it to an end. 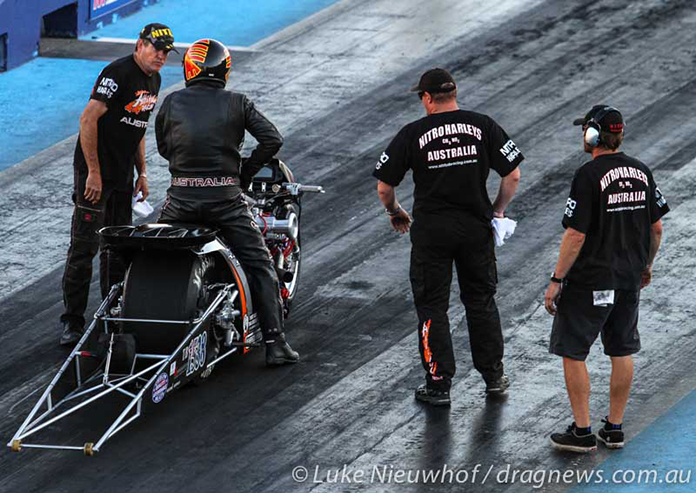 Mark Ashelford had early dramas with the bike misbehaving in the compulsory qualifying session but things came good with a win against night one winner Mark Drew in the elimination round and then a 6.58 in the final for victory. 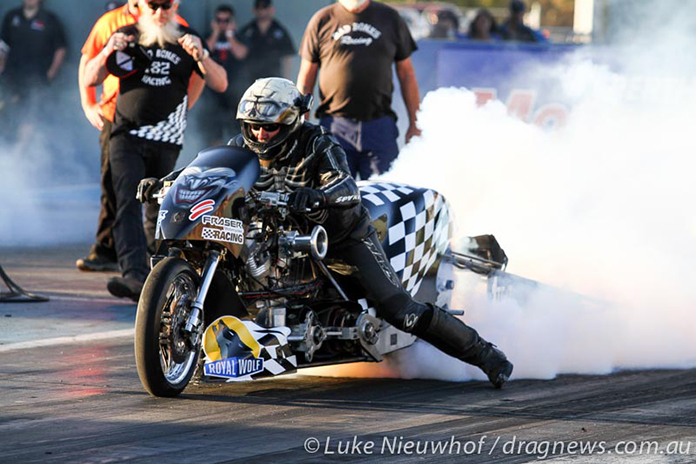 Chris Porter crossed the centre line in the final, settling for a runner up position. 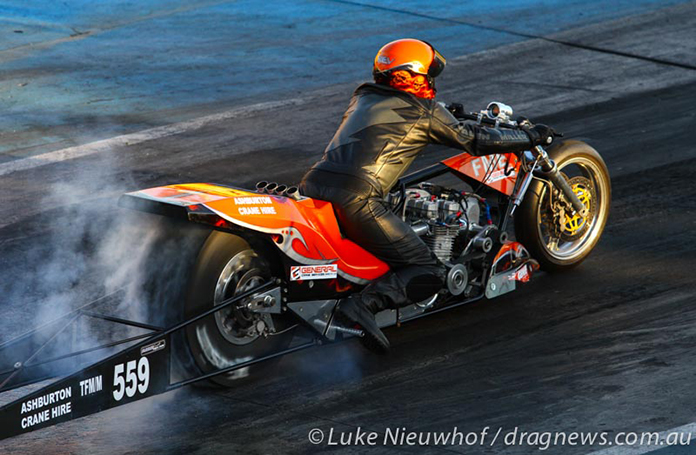 Kevin Gummow took a single in the B Final when Gordon Crawford was unable to front. It was consistency proving a winner for the team with mid seven second runs across the day. 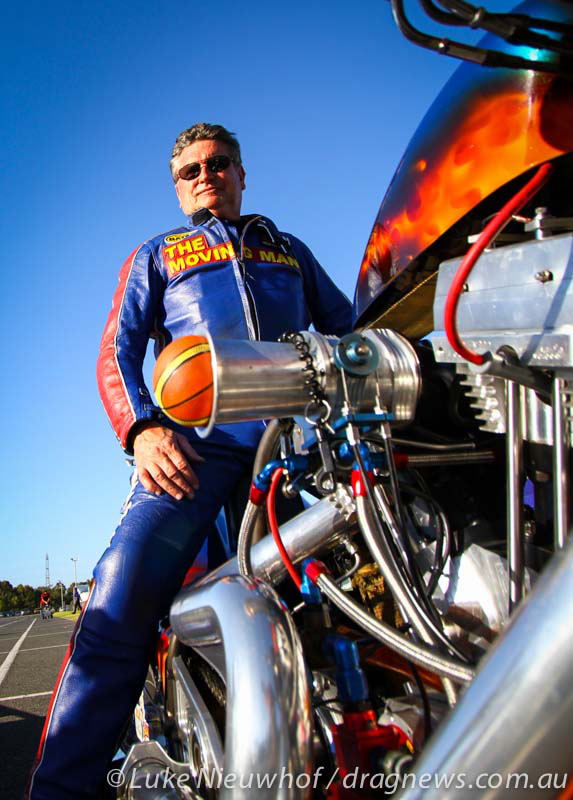 Gordon Crawford was due out for the B Final after a 7.35 win against Terry Burnett, but never made it to the start line.
“We were about to fire up there against Kevin, but we had some major electrical dramas,” he said. 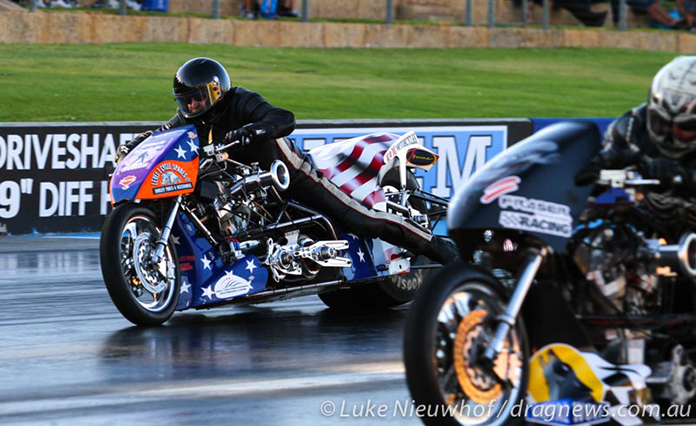 Dennis Grant had handling dramas across the weekend on his nitro Harley. 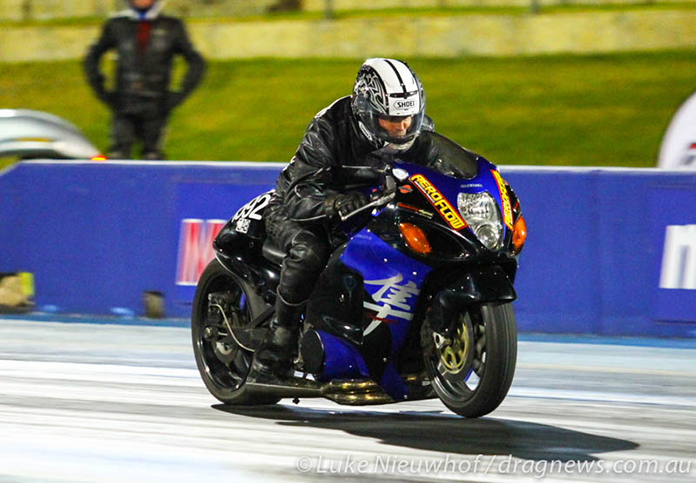 Ross Smith’s move to C/AB from A/SB appears to have been a very successful one, taking out the win in Competition Bike on his Suzuki Hayabusa. 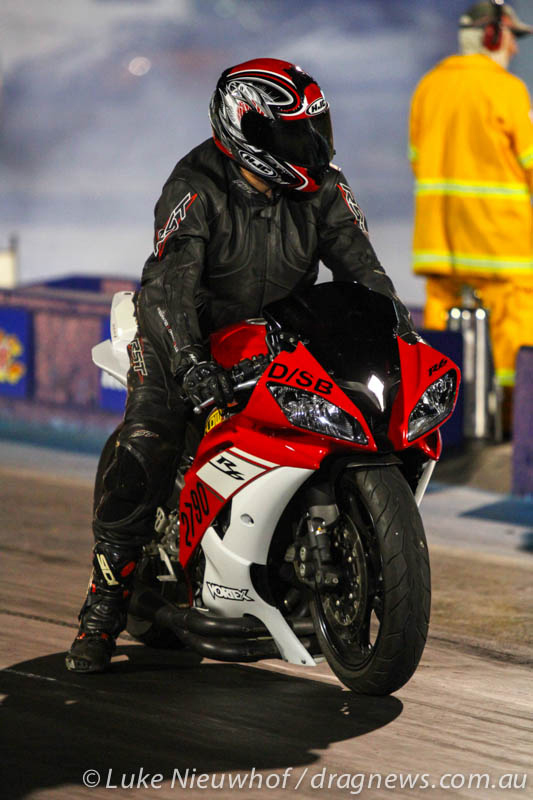 Stan Lisle didn’t have the outright performance of other machines in the bracket but went all the way to a runner up spot. 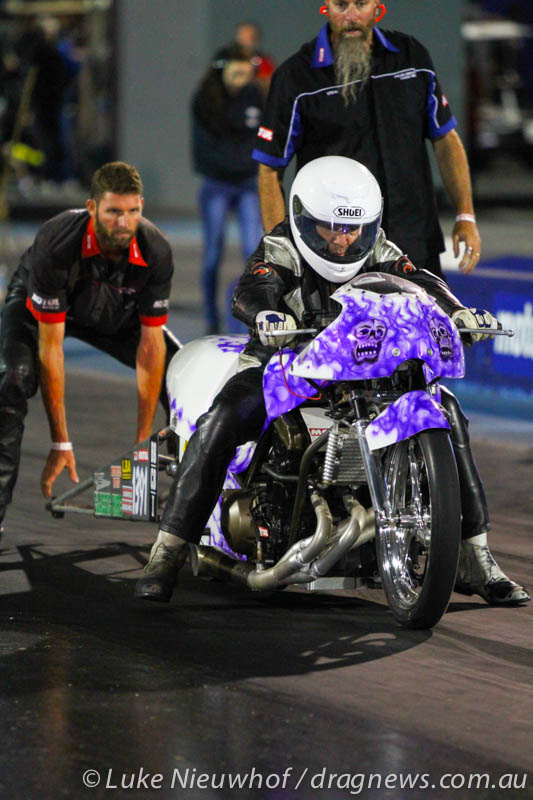 Ross Townson gets a helping hand from son Justin to line up in qualifying. 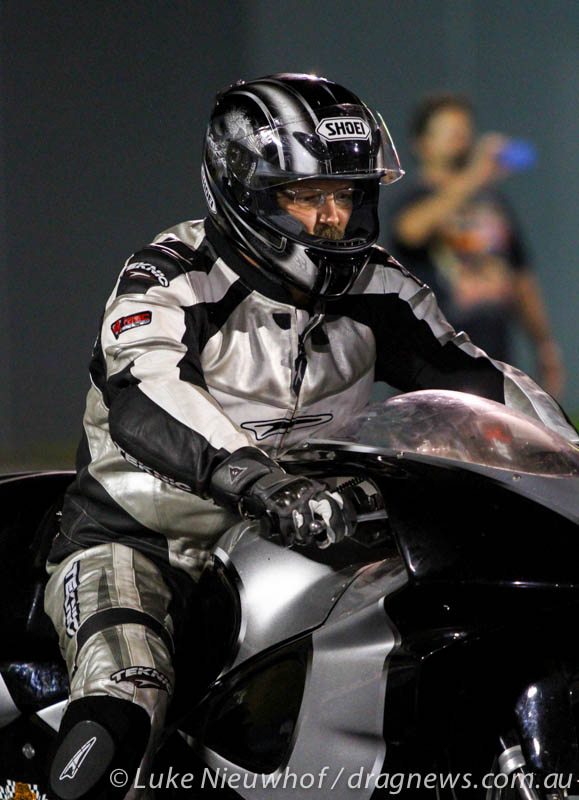 Terry Jongen had gearbox woes that prevented him from making it to eliminations. 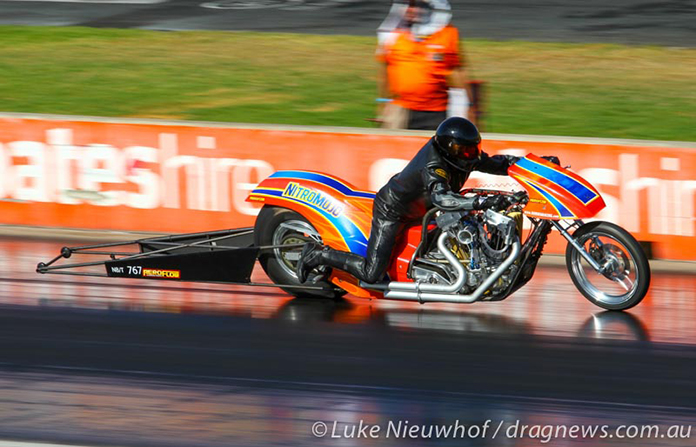 Les Holden became the first rider to compete in the new NB/T class, but this first round run got close to the wall. 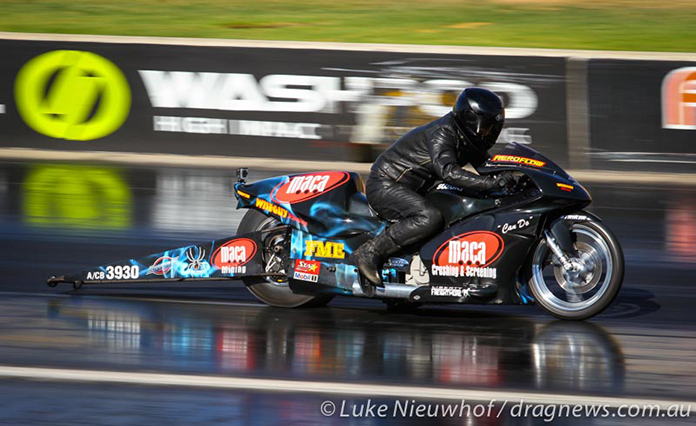 Ryan Learmonth qualified second but an oil line issue in qualifying and then tyre spin in round one hampered the team’s efforts. 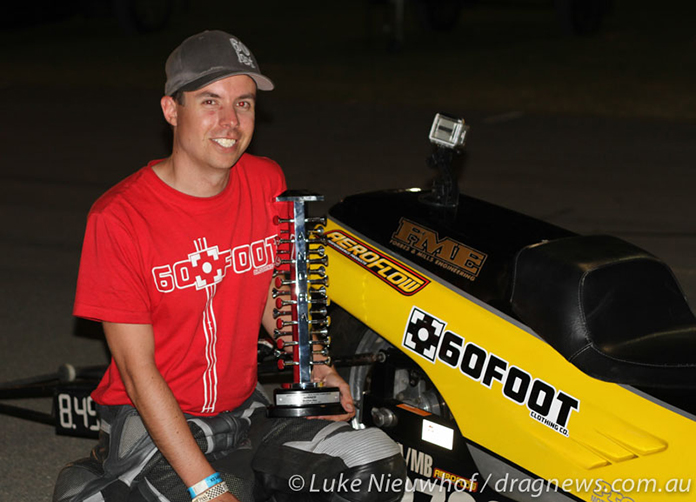 Luke Nieuwhof earned a silver Christmas tree in Modified Bike, with a lucky win in the final. Opponent Justin Townson broke a chain on the line while Nieuwhof’s 60foot Kawasaki misfired to a nine second run on an 8.45 dial in. 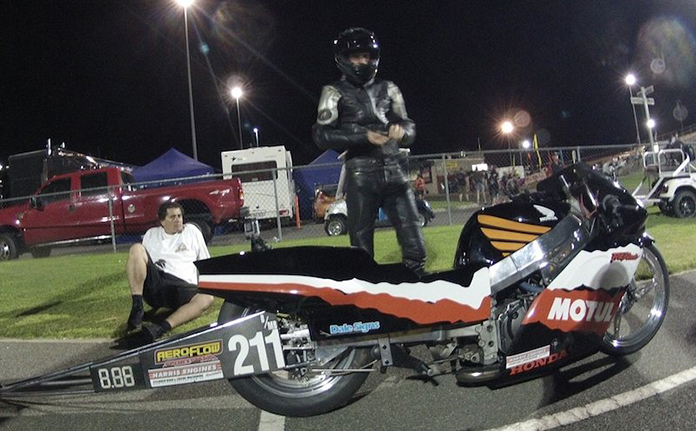 OK so we’re going to go with onboard shots here as a Canon 7D was a little too hefty to carry on the bike with me – here’s Justin getting ready. 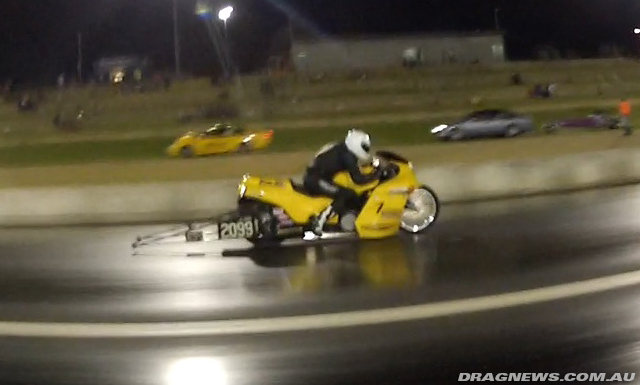 And here’s Roger Harris next to me on the track. All for you, dear readers.

Detailed Round results can be found on ANDRA