At the rate she’s going, Janette Thornley may soon have to change the name of her motorcycle drag racing team from Dream Chaser Racing to Dream Catcher Racing.

When she is crowned the 2017 American Motorcycle Racing Association Pro Fuel champion this week at Rockingham Dragway, it will be the third major title in three years for the Statesville grandmother whose end game is one day to race in the Ray Top Fuel portion of the Jim McClure All-Harley World Finals contested this week for the 26th time.

In the meantime, she has become the most feared rider in a Pro Fuel class in which nitromethane-burning motorcycles reach speeds of up to 185 miles per hour in just 1,320 feet of concrete and asphalt.

Thornley, who grew up in Oregon, got a late start on her unlikely career as a motorcycle drag racer. This is just her sixth season as a pro racer and already she has won two championships in the NHRA Harley-Davidson Drag Racing Series (2015 and 2016) and is on the verge of winning her first AMRA title.

The first woman to win a championship of any kind on a nitro motorcycle, she has done so racing against the best in her profession including fellow Carolinian Johnny Vickers of Millers Creek, whom she succeeded as champion in the NHRA series.

Vickers, a legend in motorcycle drag racing, is the two-time defending Pro Fuel champion at the McClure Finals as well as the AMRA national record holder. He is one of those who mentored Thornley early in her career.

Another who offered encouragement was the late Ray Price himself. In fact, Price’s Raleigh-based Top Fuel team maintained and transported her original fuel bike. That makes her quest to compete in the Nitro Top Fuel class all the more compelling. 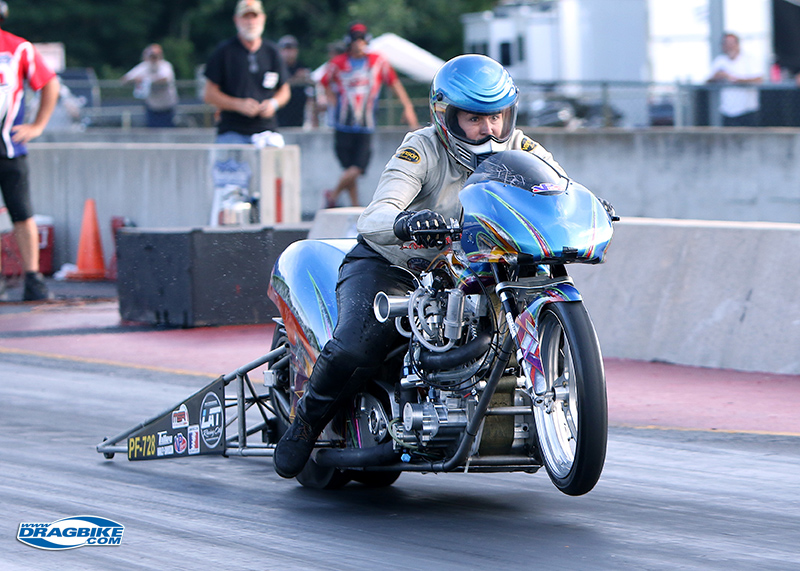 While Thornley and Vickers battle Gary Stroud of Valparaiso, Ind., Rocky Jackson of Youngsville, La., and others for the Pro Fuel title, another Carolinian, Julian’s Jay “Bulldog” Turner, is favored to win the Ray Price Top Fuel Challenge astride a bike on which he hopes to break the current AMRA records of 6.197 seconds and 231.67 miles per hour set at Rockingham in 2013 and 2015, respectively.

The three-day Harley festival will begin with a test-and-tune session on Friday although the track will be open Thursday for early parking. Pro qualifying begins Saturday at 10 a.m. with single elimination finals Sunday beginning at 11 a.m. Adult admission is $45 for all three days or $20 per day. Children six and under are free when accompanied by a ticketed adult and parking is free in Rockingham’s main lot.