Awards Continue to Pile Up for Rockingham Dragway Owner and President

Rockingham Dragway owner Steve Earwood, who next March will be inducted into Don Garlits’ International Drag Racing Hall of Fame as the 2016 recipient of the Founders Award, picked up some additional hardware at last week’s Performance Racing Industry (PRI) show in Indianapolis where he was recognized as the Professional Drag Racing Association’s 2015 Promoter of the Year.

Earwood, National Media Relations Director for the NHRA during that organization’s biggest growth period, fulfilled a dream when he bought Rockingham Dragway from the L.G. Dewitt family in 1992 and transformed it from a drag racing facility that ran only two events a year to one of the most active tracks in the nation. 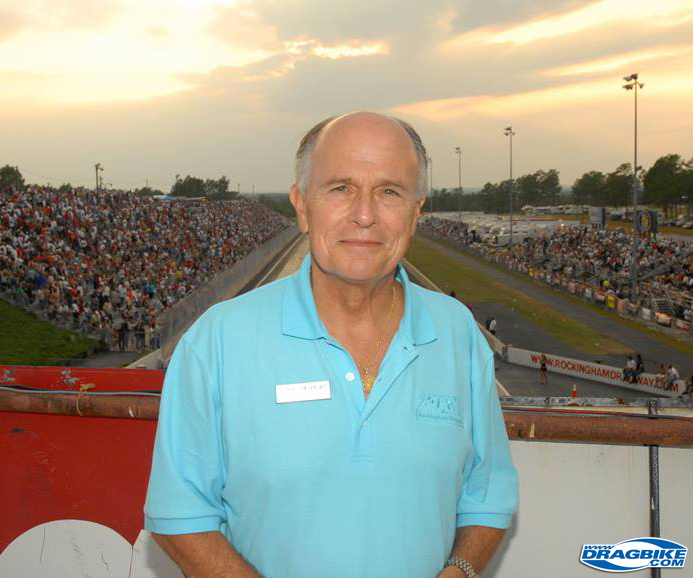 The PDRA is just the most recent organization to recognize Earwood’s promotional skill. He twice was named the IHRA’s Promoter of the Year (2001 and 2008) and his work in building the NHRA’s Winston Invitational into the most successful all-star event in the sport’s history was a key element in his induction into the NHRA’s Southeast Division Hall of Fame.

A founding member and current chairman of the North Carolina Motorsports Association, Earwood also serves on North Carolina’s Governor’s Motorsports Advisory Council and is a voting board member of the National Fire Protection Association, which was responsible for drafting document 610 that serves as a fire safety guideline for all forms of motor racing.

A member of the board of the Richmond County Chamber of Commerce as well as of Racers for Christ International, Earwood managed NHRA’s national media relations program from 1975 through 1982. Subsequently, he served as Marketing Vice-President of Billy Meyer’s Texas Motorplex, Vice-President, General Manager and co-owner of Atlanta Dragway and as a Public Relations consultant to Raymond Beadle’s Blue Max NASCAR Racing Team when it won the Winston Cup championship (with driver Rusty Wallace) in 1989.

The PDRA, which contests season championships in three different outlaw Pro Mod categories, will return to Rockingham Dragway April 7-9 for the third annual PDRA Spring Nationals. The Rock will open informally on Feb. 28 for an all makes test-and-tune session. It officially will open March 5-7 with the annual Racers Appreciation free entry bracket race.