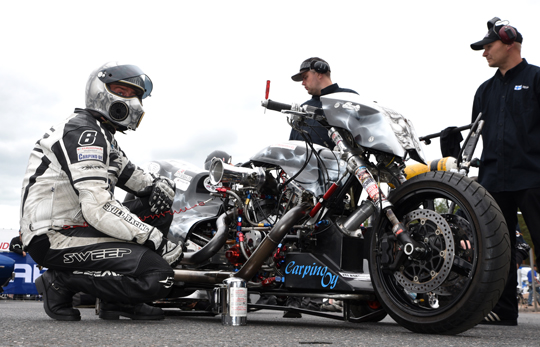 After the spectacular season kick off at Tierp Arena, the EDRS Pro Nordic Motorcycle Championship travels to Alastaro Circuit for round two of the championship. The Tierp Internationals were blessed with excellent racing, tough competition and stunning elapsed times with numerous personal bests, a promising prospect for the rest of the season, not least for Alastaro. Vesa Lipponen, Rikard Gustafsson, Mathias Bohlin, Thomas Lysebraate Olsen, Ulf Fridolfsson and Jami Oksanen are the leaders in their respective categories, and as two of these riders are from Finland and with several other countrymen among the favourites, the Finnish fans will have plenty to cheer for. 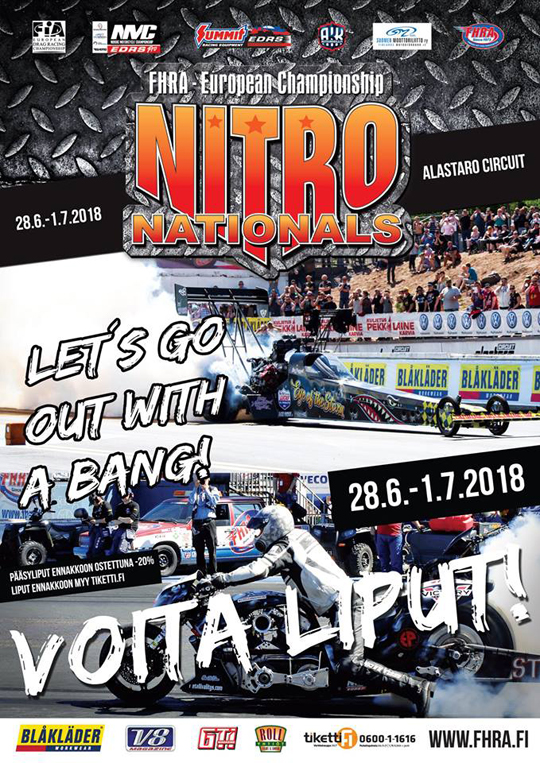 With the FHRA Nitro Nationals at Alastaro Circuit the EDRS Pro Nordic Motorcycle Championship visits the second country in the four race schedule. Alastaro, the dragstrip situated in the middle of the forest, is always a special stop for the teams and riders. But this time it is even more special, as it’s the last time the EDRS Pro Nordic MC will visit Alastaro. From 2019 the new track in Kauhava will be the new home for the FHRA Nitro Nationals. Alastaro will be missed, but a new facility also opens new possibilities and chances. Qualifying for the FHRA Nitro Nationals will start on Thursday 28th June (Super Comp Bike and Super Gas Bike), and will continue on Friday 29th and Saturday 30th June. Almost all eliminations will start on the morning of Sunday 1st July. 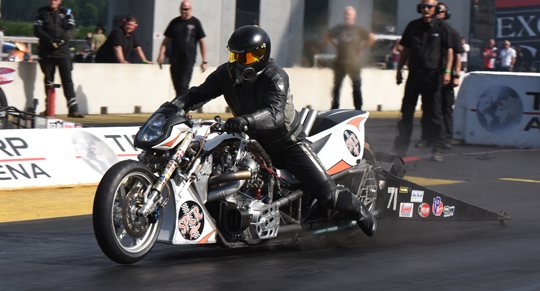 Finns are Favourite
The Tierp race was one of the best ever in the spectacular Super Twin Motorcycle category, with stunning elapsed times, a record bump spot and close racing. Vesa Lipponen claimed the victory and with a Finnish leader in the championship, it makes the Alastaro race even more interesting for the Finnish fans. But Lipponen is accompanied by eight more Finnish riders, making the chance of a home win for Finland even bigger in the competitive 15-bike field. Jaska Salakari will be back in action at his home track, and the Finn who surprised the Super Twin world at the end of last year with stunning elapsed times is one of the favourites. 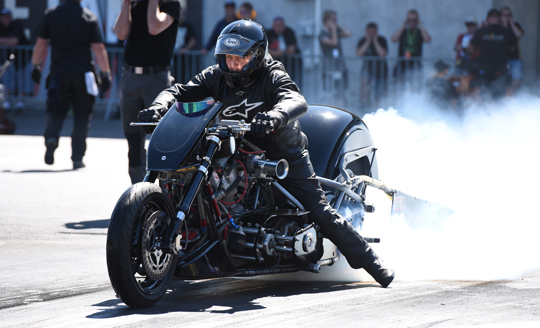 But the same is true for former champion Samu Kemppainen and Lasse Leponiemi, who showed his great form at Tierp. Harri Piensalmi will join the tour in his home country and as they proved last season, Teemu and Torsti Kettula can surprise as well. Maybe not among the favourites are Aku Lantto and Jukka Kuuru, but in eliminations everything is possible. 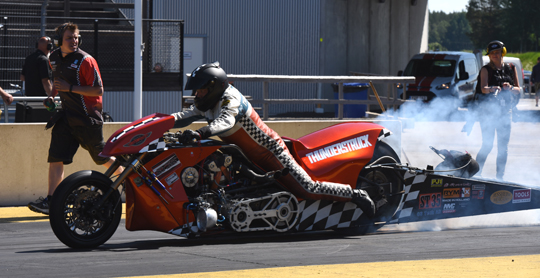 From Norway come Hans Olav Olstad, who surprised in qualifying at Tierp and already won a race in England, Svein Olav Rolfstad, the quickest man in the first round of eliminations at Tierp, and Kristin Hegre. Sweden is represented with two riders at Alastaro. Greger Johansson had a difficult weekend at Tierp, but Anders Hörnström was both quick and consistent and is the number four in the championship, only 16 points short of Leponiemi. 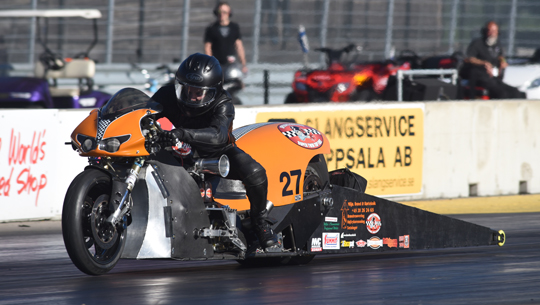 Last but not least there is Marcus Christiansen, as it looks right now the most important challenger for the Finns this season. The Dane is the number two in the championship, was the runner up at Santa Pod and Tierp and is very consistent. On the evening of Sunday 1th July, after the traditional dunk in the water barrel, we will know more. 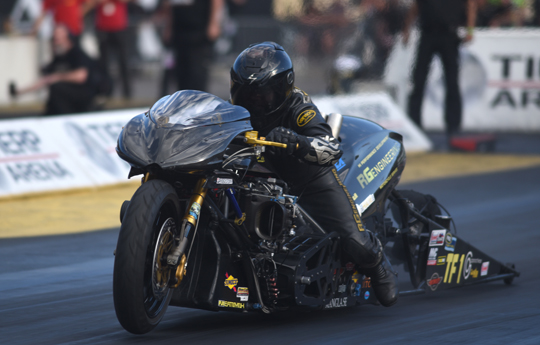 How quick can Rikard Gustafsson be in Finland?
Rikard Gustafsson’s runs were of course the highlights in Top Fuel Motorcycle at Tierp. It’s a pity that Sverre Dahl and Jan Sturla Hegre will not be in Finland to give the Swede some more competition. Thomas Pettersson will challenge Gustafsson at Alastaro, but he will need the consistency of his Funny Bike to beat the RG Engineering machine. And that will be difficult, as Gustafsson proved at Tierp that his Top Fueler is consistent as well as quick. 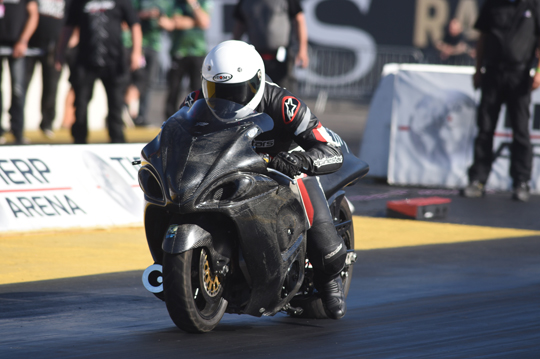 Revenge for Mogens Lund?
Super Street Bike had an excellent and exciting competition at Tierp, and with fourteen riders from five, or do we have to say six (Åland), different countries, it’s the most international field. One rider comes from Denmark, six from Sweden, two from England, one from Norway, two from Finland and two from Åland/Finland. 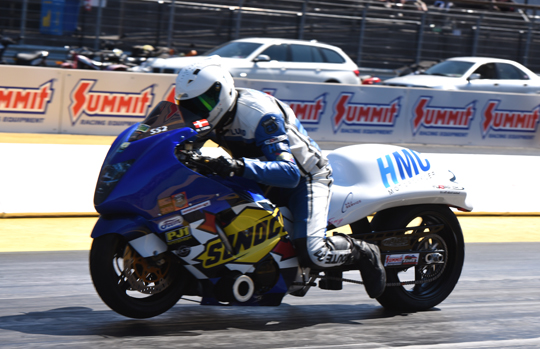 Mogens Lund from Denmark was the quickest man at Tierp, but was defeated in the final by an also very quick Mathias Bohlin. Lund will be out for revenge, especially after he ran his first 6-second pass at Tierp. Robert Nilsson stepped up in eliminations and is the number three in the championship. 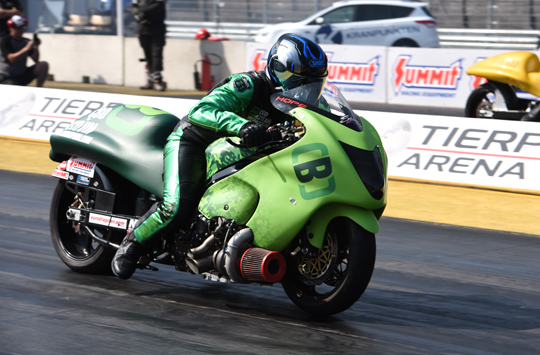 Maybe the biggest improvement in eliminations at Tierp was for Alex Hope, as the British rider reset his personal best to 7.25 seconds. Hope is the number four in the title race. Vesa Ruhanen is the home favorite and after his number two qualifying position at Tierp, the Finn improved his elapsed times with runs in the 7.0-second zone during testing at Alastaro one week ago. Ruhanen might be the man to watch! 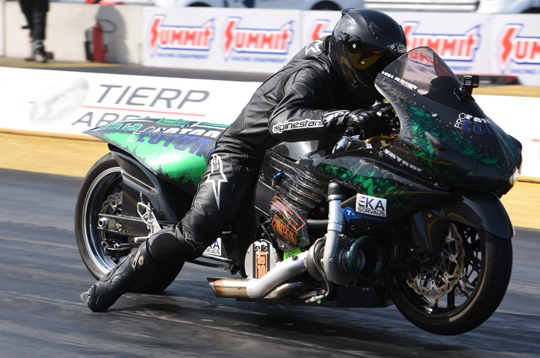 Kimmo Pulakka is the second Finn on the entry list, while Mark Hope might surprise as he made some major progress at Tierp. Anders Blanck is the number seven in the championship. The rider with the Norwegian license was quick in qualifying and the first round, but Blanck was defeated in the quarterfinals at Tierp. Bianca Nilsson proved at Tierp that the former Super Comp Bike champion is a real asset to the SSB class, as she ran her first 7-second pass with a 7.6 seconds as her new personal best. Also from Sweden come Micke Ölen, Roberth Häggblom and Arvid Gerdtsson. 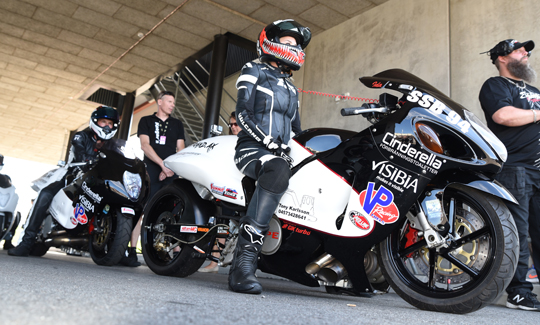 Last but not least from Åland come Kim Hilander and Ida Zetterström. The teammates were defeated in the first round at Tierp, but with the elapsed times they recorded earlier this season and last year, and knowing that Hilander was the number four in last year’s championship, they can easily go rounds and surprise. 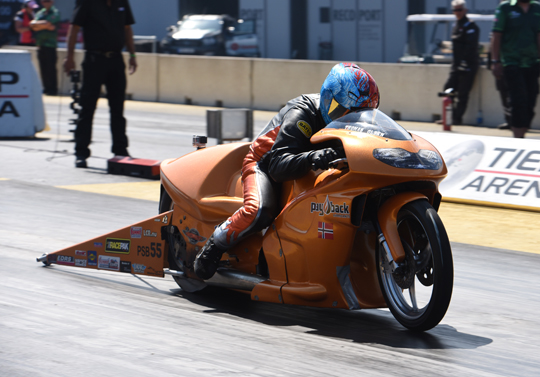 Pro Stock Motorcycle duel
The start of the 2018 season is not the best for Pro Stock Motorcycle. At Tierp, even before the event had started, the 5-bike entry list was reduced to two and when Kenneth Holmberg suffered gearbox problems, Thomas Lysebraate Olsen was the only competitor left. At Alastaro the reigning champion will again have only one competitor. Timo Savolainen will start his season at his home race. The number two from last season will definitely give the Norwegian rider some tough competition. As is looks right now, some more Pro Stock Motorcycles will join the championship in the second half of the season. 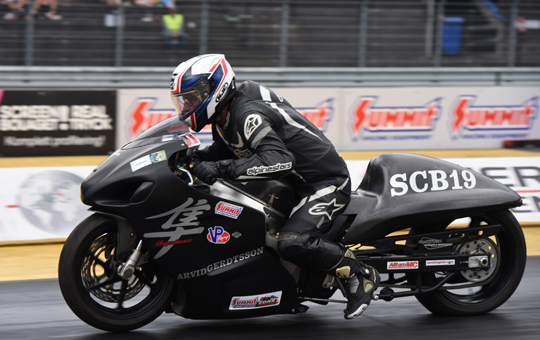 New winner
There are eleven entrants in Super Comp Bike, two from Sweden and nine from Finland. Ulf Fridolfsson was the winner at Tierp and as the rider from Sweden is not in Finland, the 8.5-second index category will have a new winner. Anders Gerdtsson was the runner-up in Tierp and with a good result in Alastaro he can be the leader at the halfway point of the season. Peter Östlund is always among the favorites for a race win and Finland has a favorite in last year’s runner-up Kimmo Rantala. 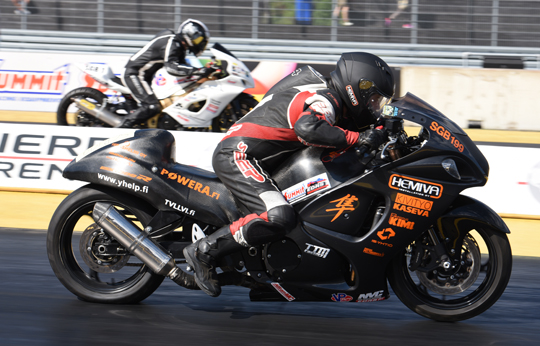 A repeat from Tierp?
Super Gas Bike has eleven entrants as well and with nine from Finland and two from Norway, the home country dominates the 9.5-second index category. With the top four from race one, winner Jami Oksanen (Finland), runner-up Ellen Ødegaard (Norway), reigning champion Iiro Reinola and Jani Blom all present, the fight for the number one position in the championship will be interesting. But there are also some new names we haven’t seen before, and that a good sign for this entry-level category and the sport of motorcycle drag racing.