Coverage of Tierp by Marcus Möller

Tierp Internationals 2018 where held at the famous Tierp Arena located just an hour north of Stockholm from the 7th to the 10th of June. The weather was relatively hot, about 80-84 degrees F in the air during the days. It was the first round of four in the EDRS Pro MC (European Dragracing Series Pro Motorcycle Championship).

Top Fuel Bike had 5 participants, both the mainly blown and nitro-powered bikes and turbocharged Funny Bikes. Sverre Dahl from Norway made a stunning new personal best straight off the trailer, 5.92 and 209 mph wich made him top qualifier after that round with Rikard Gustavsson right after with a 6.17. That 6.17 run by Rikard was about to be his highest ET when the event was over! Rikards following qualification runs: Q2 5.84, Q3 5.81, Q4 5,94! Thomas Pettersson became the quickest Funny Bike with his 6.73/191mph. Jan-Sturla Hegre had a good weekend of testing out big changes on the bike but got defeated on a holeshot by Thomas Pettersson in the first round of eliminations. Sverre Dahl had to shut of in E1 and Peter Andersson got a bye run. In the final round of Top Fuel Bike where Rikard G faced Peter Andersson and his Funny Bike and Rikard ended up as the winner with 6.06 to Peter’s 7.36. Rikard got a real jackpot, top qualifier, new nordic backed up ET record and winner of the event!

Super Twin Top Fuel Bike had 14 participants who fought about 8 spots! Wich went into a real battle in the very first round of qualifying with 3 riders in the 6’s from start! Hans-Olav Olstad 6.31, Marcus Christiansen 6.56, Lasse Leponiemi 6.66. In the second round young Marcus Christiansen from Denmark improved to 6.47 and 221mph on his Pro Stock Bike-stylish Top Fuel Harley! Anders Hörnström got the third spot with a strong 6.50/208mph. Our tall ‘flying finn’ Samu Kemppainen kept his front wheel in the air down to the 1000-ft and took the fourth spot with a 6.65/201mph! Trond Hoiberget from Norway hired a seat by Juha Hintukainen on the bike that Jim Page has been competing within the USA recently. Q2 was Trond’s and Juha’s first run with Trond as a new driver on a new track but that didn’t seems to bother at all, a smooth and strong 6,90/175mph gave them the sixth spot! In Q3 Samu and Trond repeated their previous runs, just slightly slower. Anders improved to from his 6.50 to 6.48.

Greger Johansson has been building a complete new bike with a new stronger frame and Q4 was the first actual run with the new bike, not very straight and feathering the throttle and lift off before the 1/8th ended up in 8.13/161mph and at the 1/8th the clocks stopped at 5.26/136mph. 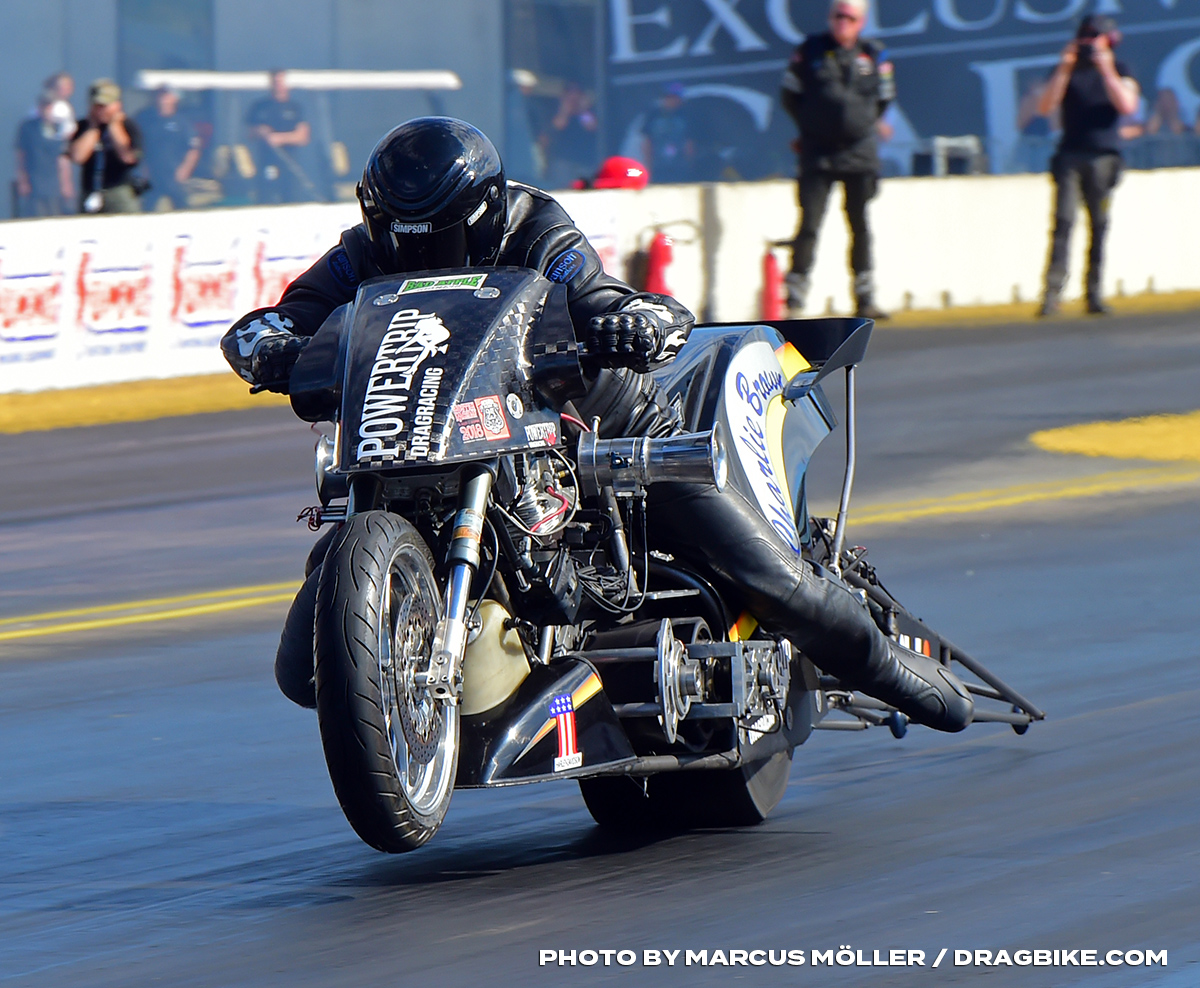