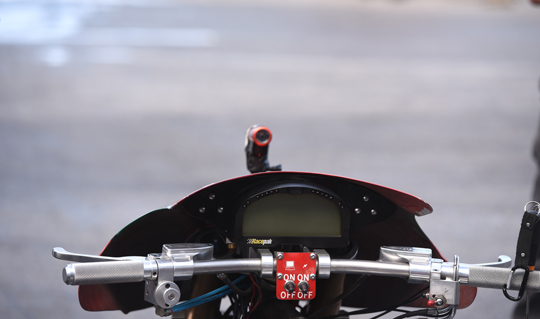 Jan Sturla Hegre (Top Fuel Motorcycle), Marcus Christiansen (Super Twin Motorcycle), Robert Karlsson (Pro Stock Motorcycle) and Mathias Bohlin (Super Street Bike) were the winners in their respective categories at the Dico Internationals, but only Hegre doubled up by winning the title as well. In Super Twin Motorcycle a record breaking Tommy Grimes clinched the title with a runner-up finish, while in Pro Stock Motorcycle and Super Street Bike 2017 multiple race winners Thomas Lysebraate Olsen and Mogens Lund secured the title with a semifinal finish at Tierp Arena. In Super Comp Bike Emil Östlund doubled up with a win and the title, while in Super Gas Bike Micke Ölen was the winner, but the title went to Iiro Reinola. With six champions from five countries, the EDRS Pro Nordic Motorcycle Championship titles were well distributed.

The 2017 EDRS Pro Nordic Motorcycle Championship ended in style, as after all eliminations were completed in the first three races, the fourth and final race, the Dico Internationals at Tierp Arena, was record breaking, exciting and also finished with great finals.

Tommy Grimes and Marcus Christiansen
In Super Twin Motorcycle Roman Sixta entered the Dico Internationals as the leader in the championship, but the rider from the Czech Republic knew he would meet tough competition from Gardermoen winner Tommy Grimes, riding Per Bengtsson’s ‘The Beast’. And that was exactly what happened at Tierp Arena, as the American rider dominated qualifying with a stunning 6.31 seconds to clinch the number one qualifying spot.

Samu Kemppainen was back to form with a great 6.53 seconds and was the number two qualifier. Marcus Christiansen’s third qualifying spot and 6.58 seconds elapsed time might have been a surprise for many, but the Dane showed what he was capable of a week earlier at Hockenheim.

Lasse Leponiemi had a good qualifying as well with 6.72 seconds and was the number four, with championship leader Sixta only fifth. Tierp Internationals winner Anders Hörnström was the last one to qualify in the 6-second zone and was in sixth position, with Petri Mattsson and Ulf Ledström seventh and eighth in the 8-bike elimination ladder.

Greger Johansson, the number three in the championship standing, was a surprise non-qualifier and the same was true for Ismo Mäenpää, Jaska Salakari, Svein Olav Rolfstad and Alastaro winner Teemu Kettula. But Johansson got a second chance when Matsson had to withdraw from eliminations after problems in qualifying.

In the first round of eliminations there was a major upset when Kemppainen was once again hit by mechanical problems and couldn’t start, handing the win to first alternate, Johansson. Leponiemi had problems as well and with a win, Sixta kept his championships dream alive. Grimes and Christiansen proved their qualifying form once again by defeating Ledström and Hörnström with great 6.36 and 6.51 seconds elapsed times respectively.

In the semifinal Grimes had to face Sixta and the winner would take it all, as he would also secure the 2017 EDRS Pro Nordic MC Super Twin Motorcycle championship! It was Grimes who took it all, as ‘The Beast’ stormed to a stunning 6.29 seconds, far too quick for Sixta, who ran into problems with 7.9 seconds. In the second semifinal Christiansen impressed with another 6.5-second to defeat Johansson and advance to the final.

Grimes was of course the clear favourite to win the final, but the Dane was away first, ran 6.597 seconds, and although Grimes seemed to catch up with Christiansen during the run, but the newly crowned champion ran into problems, recorded 6.599 seconds at only 276 km/h and was defeated by the Dane.

It was the first win for Christiansen in the EDRS Pro Nordic MC. In the championship Sixta finished in second position, with outgoing champion Kemppainen third and Johansson fourth.

In Top Fuel Motorcycle Jan Sturla Hegre entered the final race of the season as the number one in the championship, with reigning champion Thomas Pettersson only 12 points behind. Hegre’s Top Fueler might be quicker, but Pettersson’s consistency with the Funny Bike could be more important in eliminations.

In qualifying Sverre Dahl once again produced a 5-second run with 5.98 seconds to secure the number one qualifying position, with Hegre (6.14 seconds) in second position and Pettersson third. Peter Andersson and his namesake Peter Andersson ended qualifying in fourth and fifth position.

As expected, Dahl, Hegre and Pettersson advanced to the semifinals, where Hegre had a bye run. Dahl had to face Pettersson, but the Norwegian rider had to shut off his bike with a problem, handing the win to Pettersson.

In the final the winner would take it all, as the race winner would also clinch the title. While Pettersson was waiting in the lineup for the final, Hegre’s crew worked hard to get the bike ready in time after the Norwegian rider suffered mechanical problems in the semifinal. With only a few minutes left, Hegre arrived and gave the team what they deserved, the race win and the title. In the championship Pettersson finished second, with Dahl in third position.

Robert Karlsson rules, but title goes to Thomas Olsen with a personal best

Thomas Lysebraate Olsen was leading the championship after three consecutive victories, but the Norwegian rider had to work hard after he suffered severe engine damage at Hockenheim, the week before the Dico Internationals. The work paid off as Olsen ran a great 7.14 seconds in qualifying, good enough for the number four position, just in front of Timo Savolainen, the runner up in the championship after three races.

The top three at Tierp was both extremely quick and close together. In his first run former EDRS Pro Nordic Pro Stock Motorcycle champion Robert Karlsson stormed to 7.01 seconds. Karlsson had to leave Tierp after that run, as he had other racing obligations in a long distance car race at another track.

Kalle Lyrén was immediately back to form at his comeback, as the Veidec Lyrén Motorsport rider recorded a great 7.01 seconds, handing the outgoing champion the number three qualifying position.

In the first round of eliminations Olsen and Savolainen had to face each other and as the Norwegian rider defeated the runner up in the championship, the 2017 title was clinched for Olsen. Alex Hope, the number six qualifier, advanced to the semifinals when Lyrén pulled a 0.01-second red light.

Karlsson proved he was the man to beat on race day with an stunning 6.98 seconds in the first round. In the semifinal Karlsson even improved to 6.97 seconds to defeat Hope. In the other semifinal Olsen impressed with a new personal best of 7.10 seconds, but that was not enough to beat Fredlund, as the Finn recorded 7.02 seconds.

With Fredlund and Karlsson, the Dico Internationals had its dream final. And what a great final is was. Both riders had an almost identical reaction time, and while Karlsson stormed to his third consecutive winning 6.9-second of the day with 6.974 seconds, Fredlund was not far behind with 7.01 seconds.

In the championship Savolainen remained in second position, with Hope third and Karlsson, despite only taking part in two of the four races, fourth.

In Super Street Bike Mogens Lund was the clear favourite to win the title, as the Danish Sunoco rider won two races, finished runner up once and recorded stunning elapsed time during the season, coming closer to his first 6.9-second elapsed time almost every race.

In qualifying Lund needed the second day to jump into the number one position with 7.07 seconds, 0.01 seconds quicker than Friday qualifying leader Garry Bowe from England.

Lund had a bye run in the first round of eliminations and defeated outgoing champion Henri Kolehmainen in the quarter finals to advance to the semifinal. From that moment, the 2017 EDRS Pro Nordic MC Super Street Bike title was safe for the Dane. In the semifinal Lund had to face Blanck, but suffered clutch problems and had to shut off his bike, handing the win to Blanck.

On the other side of the elimination ladder there was a major upset in the first round when Bowe ran into mechanical problems and was defeated by number 15 qualifier Dag Wagenius. Bohlin and Ruhanen both did extremely well and with 7.2-second runs they defeated Nilsson and Wagenius, to advance to the semifinal, where they had to race each other.

Bohlin was the winner of that close race (7.32 for Bohlin and 7.36 for Nilsson) and had to face Blanck in the final. But the final was an anticlimax as Blanck suffered an oil leak in the burn out, handing the win in a bye run to Bohlin. It was the first EDRS Pro Nordic MC SSB win for the Swede. In the championship Blanck ended in second position, with Ruhanen third, Hilander fourth and Friström fifth.

Emil Östlund entered the Dico Internationals as the leader in Super Comp Bike, and the Swede made his intentions loud and clear by claiming the number one qualifying position. Peter Svensson ended qualifying in second position, with Tomas Jonsson third and Kimmo Rantala, the number two in the championship, in sixth position.

Östlund made no mistakes, defeated outgoing champion Bianca Nilsson in the quarter finals on a holeshot, to advance to the final after a bye run in the semifinal. On the other side of the elimination ladder Jonsson saw his championship dreams disappear after a first round exit against Björn Linde.

Svensson and Rantala advanced to the semifinal, where Svensson defeated the Finn on a holeshot. In the final it was another holeshot win as Östlund’s reaction time was so much quicker, that even Svensson’s 8.55 seconds elapsed time was not enough to defeat Östlund, who doubled up with a win and the 2017 championship.

Behind Östlund, Rantala ended the championship in second position, with Jonsson third and Peter Östlund fourth.

Iiro Reinola was the favourite to win the Super Gas Bike title, as the numbers two and three in the championship standing, Heikki Koskinen and Jari Malinen, missed the opening round and could not be awarded with the bonus points for attending all four races.

In qualifying it was Magnus Pollack who claimed the number one qualifying position, with Reinola second, Malinen third and Koskinen behind Micke Ölen fifth. Pollack had a bye run in the first round, while Reinola ran under the 9.5-second index and was defeated by Ölen.

Koskinen won his first round against Malinen, but was then defeated in the semifinals by Pollack. The final was decided on a holeshot as Ölen had a far better reaction time than Pollack and took the win.

As expected the title went to Reinola, with Koskinen in second place and Malinen third.

More photos from the Dico Internationals can be found at: www.edrspro.com, photo galleries, August, Tierp Arena 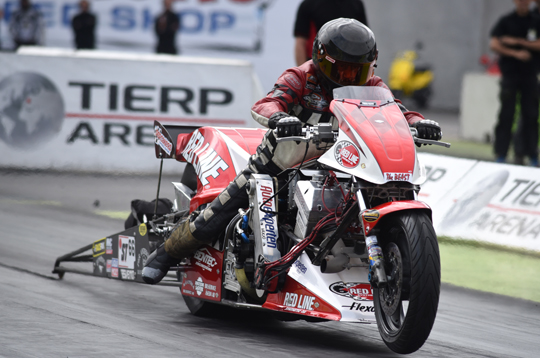 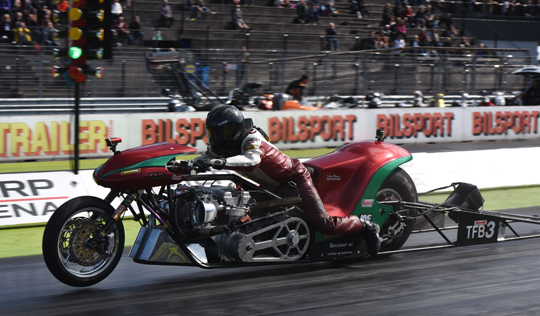 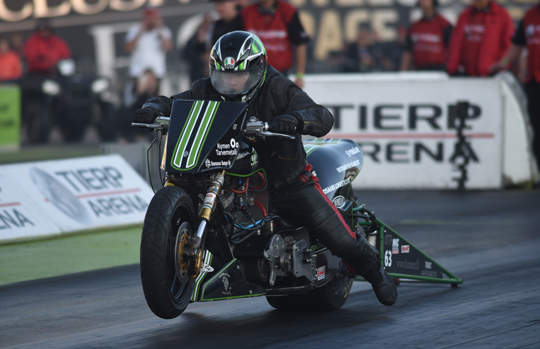 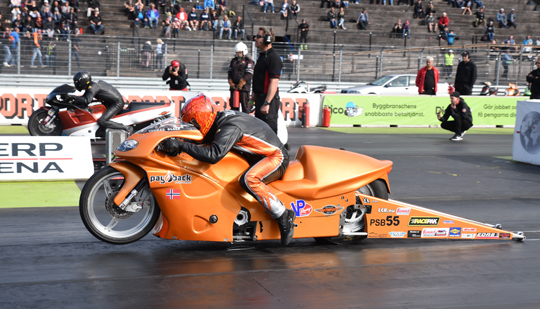