Record-Breaking Drag Challenge in the heat of Gardermoen Raceway 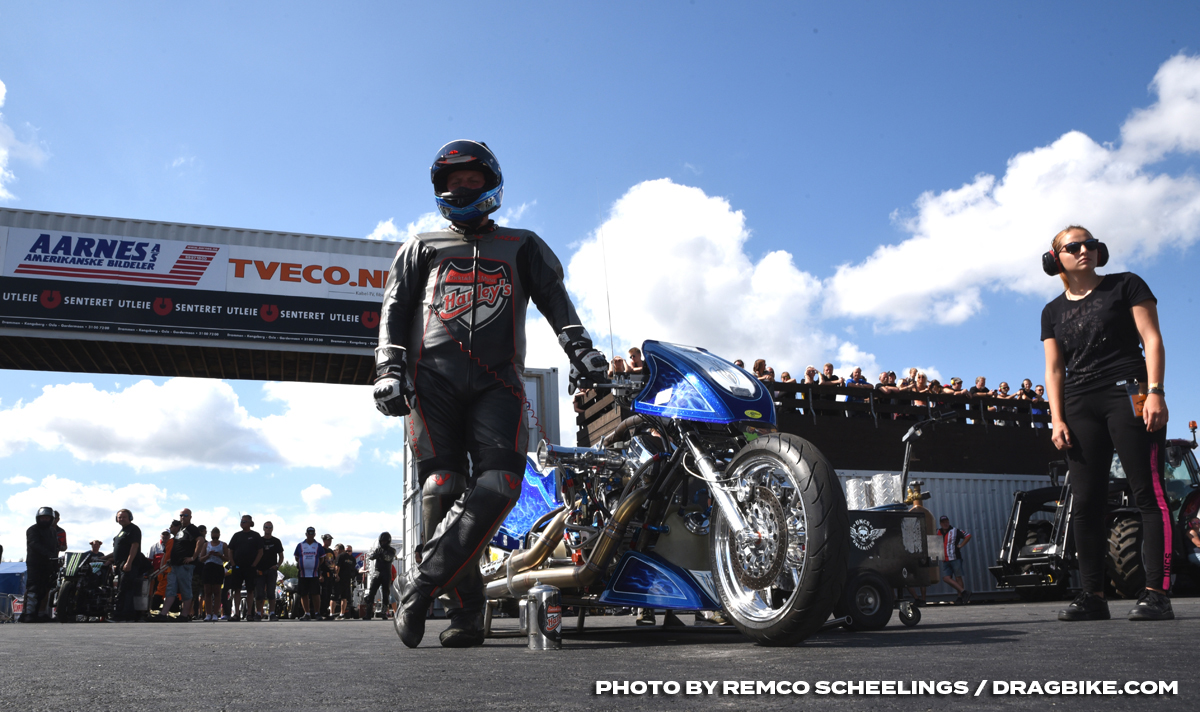 The 2018 Drag Challenge was in many ways record breaking. That the temperature exceeded 33 degrees was only one of them, but even more important were the record-breaking performances in all classes of the EDRS Pro Nordic Motorcycle Championship. Sverre Dahl, Marcus Christiansen, Kalle Lyrén and Mogens Lund were the winners in their respective categories, but Svein Olaf Rolfstad and Mathias Bohlin were also the stars of this great third round of the EDRS Pro Nordic MC. All qualifying and eliminations results and championship standings can be found on the Dragracingeurope.eu website. In this article, we give a short review and pay attention to some other highlights and notable events that happened during the Drag Challenge at Gardermoen Raceway. 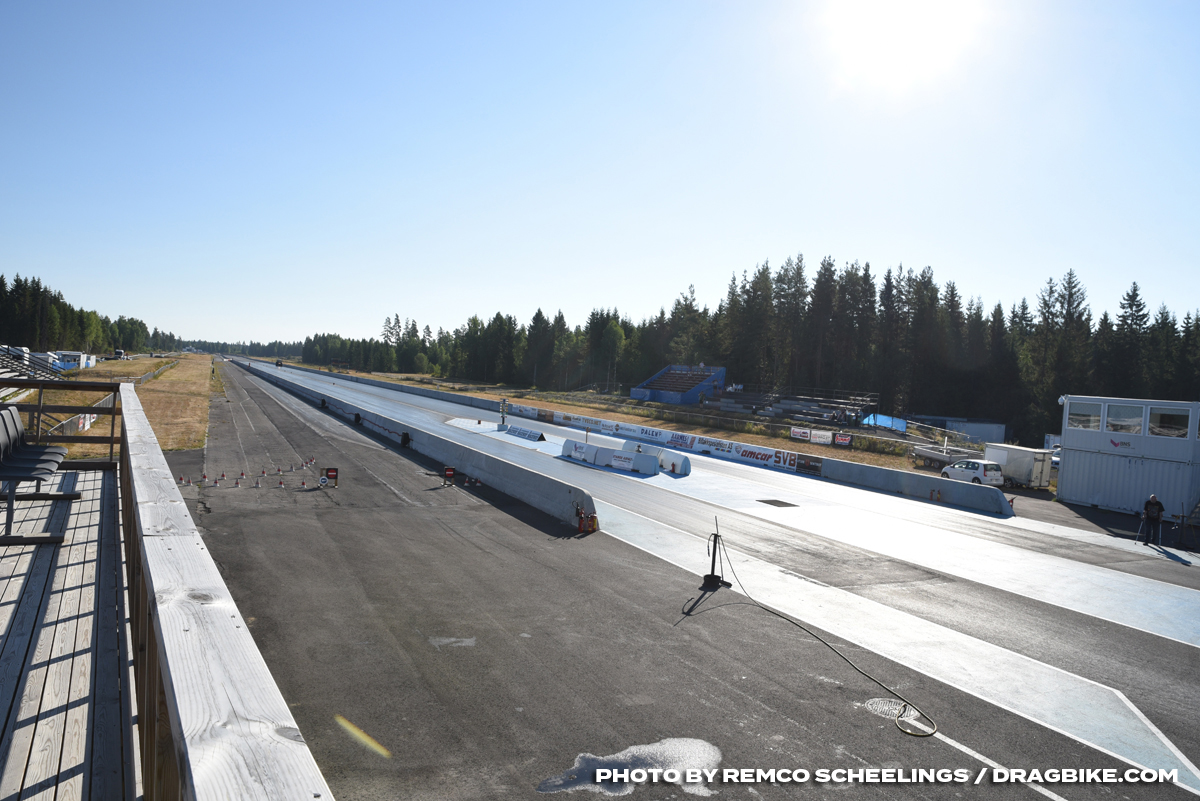 The 2018 Drag Challenge, round three of the EDRS Pro Nordic Motorcycle Championship, is in many ways definitely an edition all people who were at present at Gardermoen Raceway will still remember for a while. First of all many credits have to go out to the hard-working track crew. Air temperatures exceeding 33 degrees and track temperatures that are even exceptional in the USA, together with bad air for engines that need as much oxygen as possible, made it almost impossible to expect good traction and great elapsed times. 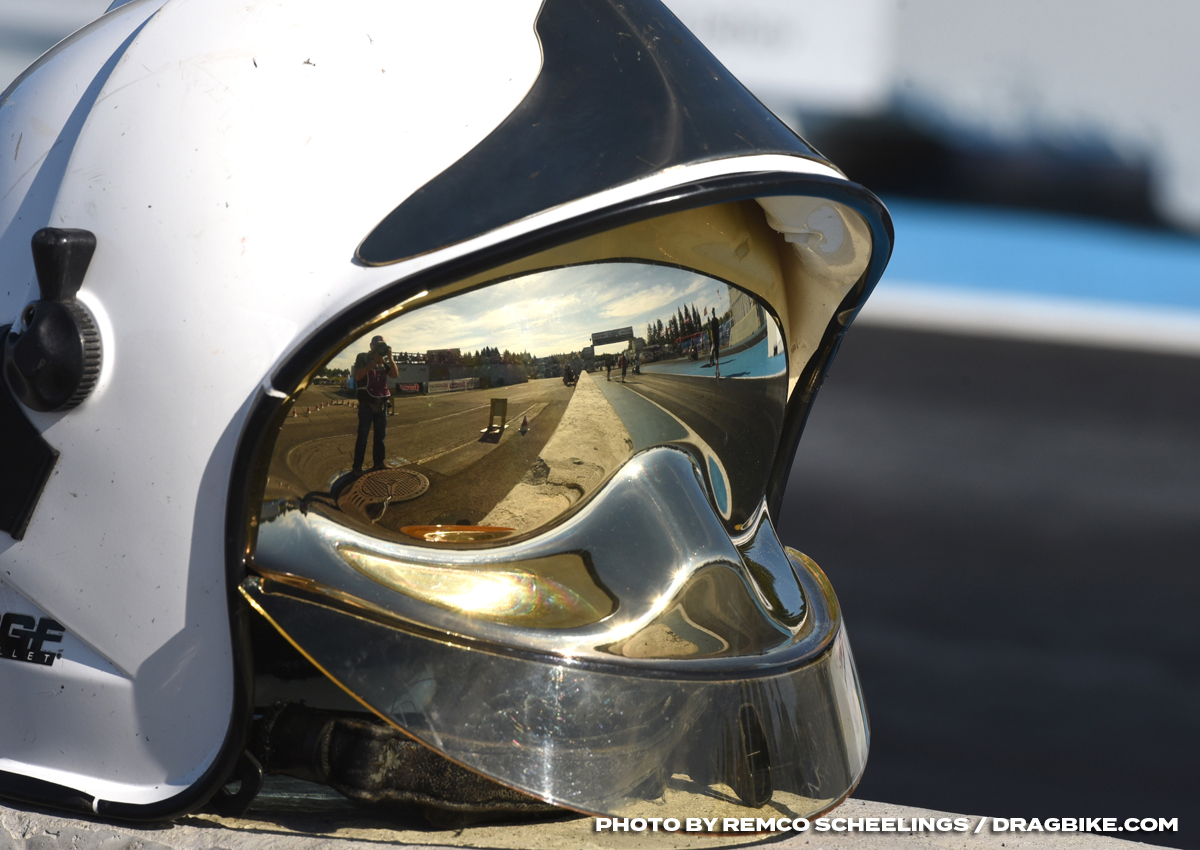 But the track crew overcame these difficult conditions and once again proved that Gardermoen Raceway is one of the best tracks in Europe. The rain on Saturday evening and the better temperatures and air on Sunday made the final push to make eliminations record-setting and to give the track crew the credits they deserved.

Sverre Dahl into the 5.8

Sverre Dahl was the leader after three qualifying runs on Friday with 6.38 seconds. On Saturday Rikard Gustafsson bounced back with 6.12 seconds to take over the number one position, with Dahl second and Jan Sturla Hegre third. Qualifying was also the end of Hegre’s Drag Challenge weekend as the team had to withdraw from eliminations with engine damage.

As expected it was impossible for Thomas Pettersson’s Funny Bike to match the elapsed times of the three Top Fuelers and the Swedish rider was in the fourth position.

In eliminations, Dahl had a bye run in the semifinals but impressed with a stunning 5.94 seconds. In the other semifinal Gustafsson defeated Pettersson, thus the two quickest Top Fuel Motorcycles had to face each other in the final. In a great run, Dahl improved to a spectacular 5.896 seconds, a new personal best and track record and too quick for the also impressive 6.01 seconds of Gustafsson. 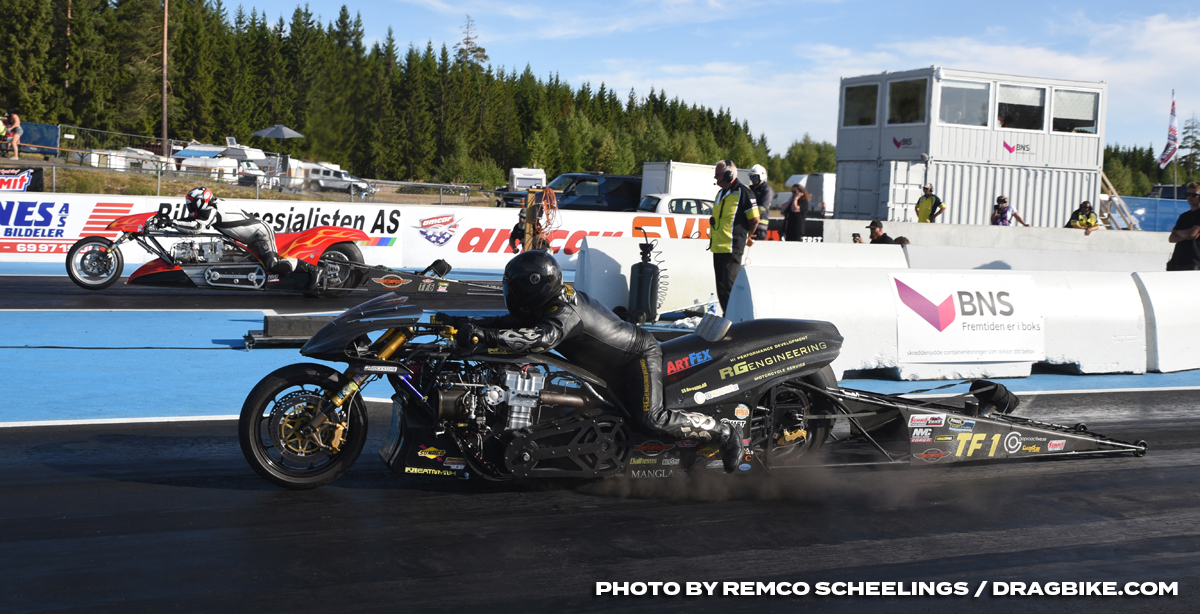 Two in a row for Marcus Christiansen

Marcus Christiansen was the leader after Friday qualifying in Super Twin Motorcycle, but the Danish championship leader was upstaged by Svein Olav Rolfstad on Saturday as the home favorite stormed to an unbelievable 6.23 seconds, one of the quickest Super Twin runs ever in Europe.

Roman Sixta was back in the third position but had some problems on Saturday with crossing the center line. Harri Piensalmi improved to 6.91 seconds on Saturday to claim the fourth position. Anders Hörnström needed the Friday to repair his engine, but one run on Saturday was enough to record 6.95 seconds and secure the fifth spot on the elimination ladder.

Samu Kemppainen was the last rider with a 6-second run, while Trond Höiberget and Lasse Leponiemi completed the 8-bike elimination ladder. Gregor Johansson was the first alternate while Kristin Hegre ran a great 7.72 seconds, but even that was not enough to make the top ten in the 14-bike field.

In the first round of eliminations, Christiansen escaped with a holeshot win over a quicker Höiberget and had to face Kemppainen in the semifinal, as the Finn was back to form in the quarter-finals with a 6.52-second win over Sixta. Rolfstad couldn’t come close to his 6.23-second qualifying pass, but 6.93 and 7.49-second runs were enough to defeat Leponiemi and Hörnström, who was too quick for Piensalmi in the first round. 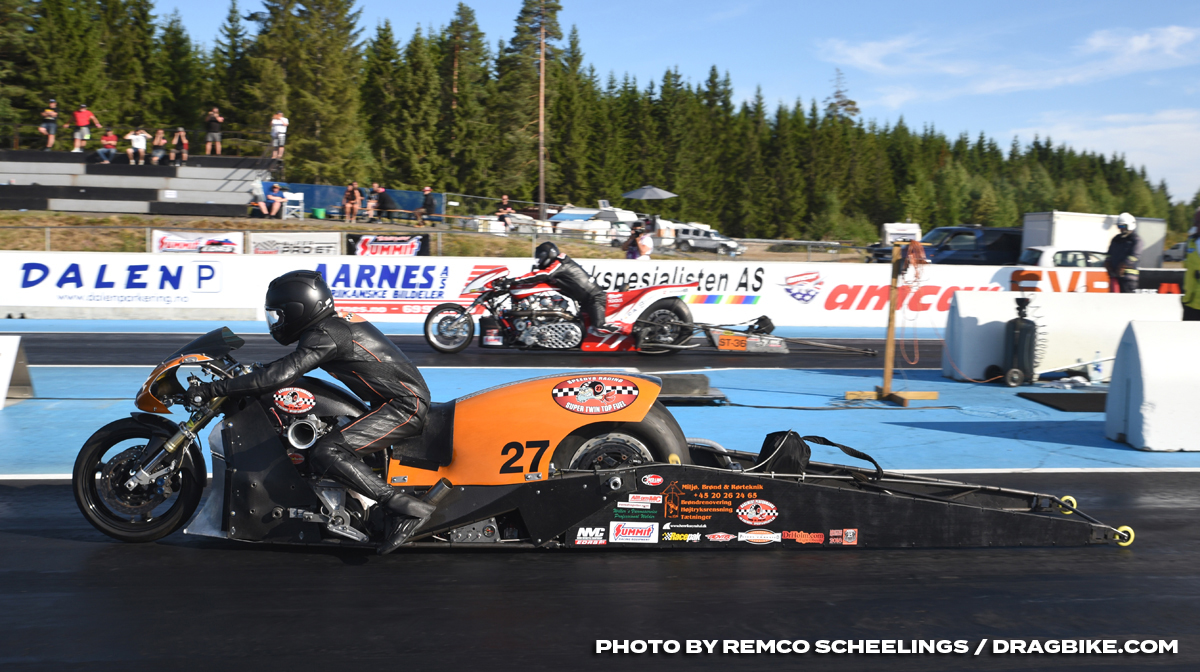 Just like in Top Fuel Motorcycle with a Norwegian rider and the numbers one and two qualifiers in the final, the Drag Challenge had the final it could only have dreamed of. But this time there was no Norwegian winner as Christiansen saved the best for the last and improved to a winning 6.38 seconds, while Rolfstad suffered serious engine problems immediately after the start. After winning at Alastaro, it was the second consecutive victory for the Danish championship leader.

Comeback with a win for Kalle Lyrén

Kalle Lyrén had to skip the first two rounds of the championship due to lack of parts, but the former champion was back at Gardermoen in commanding style. In qualifying Lyrén was both quick and consistent as he started with 7.15 seconds, to record two 7.09 and two 7.08-second runs in the next four rounds. Reigning champion Thomas Lysebraate Olsen claimed the second qualifying position with 7.20 seconds. Timo Savolainen was third, but the Finn suffered severe engine damage and had to withdraw from eliminations. Norwegian rookie Tobias Steen was fourth and Bo Thorselius fifth and first alternate.

Lyrén was also in a class of his own in eliminations. The Swedish rider stepped up to a stunning 6.999 seconds in the semifinals to defeat Steen. In the final Lyrén was supposed to face Olsen, but the home favorite suffered electrical problems when he fired up the engine in the semifinals, handing the win in a bye run to Thorselius.

In the final, it was Thorselius who suffered problems and couldn’t start. In a bye run, Lyrén stormed to a great 6.990 seconds and scored a well-deserved win in a flawless weekend.

Mathias Bohlin and Mogens Lund in the spotlight

After his Tierp and Alastaro performance, it was not a big surprise anymore that Mathias Bohlin stormed to the number one qualifying position in a great 7.09 seconds. Reigning champion Mogens Lund improved during the weekend to claim the second qualifying position with 7.179 seconds.

Vesa Ruhanen was only 0.001 seconds behind in third. Robert Nilsson was in 14th position Friday evening, but the Swedish rider improved to 7.24 seconds on Saturday to claim the fourth spot, with Alex Hope fifth with 7.46 seconds. Anders Blanck completed the top six.

But Saturday qualifying was completely overshadowed by the horrific top-end crash of Kim Hilander. The Finn broke his upper leg in three places, but looking at the speed of 300 km/h and the way it happened, it could have been far worse. Svein Ove Brändhagen was in the other lane and also involved in the incident, but although his bike was damaged, he escaped without injuries. We wish Kim Hilander a speedy recovery and hope to see him back on track as soon as possible. Ida Zetterström had to go through a horrific time as well as she was waiting in the line-up when she saw her boyfriend crash. On Sunday Zetterström was back at Gardermoen and made two runs out of the competition. It was great to see her run a new personal best, an impressive performance.

In the first round of eliminations Mark Hope, the number nine qualifier, defeated number six qualifier, Blanck. Ruhanen, Lund and Alex Hope had no problems to advance to the quarterfinals, while Roberth Häggblom and Robert Nilsson had a bye run in the first round.

Bohlin had a bye run as well, but the Swede suffered severe engine damage and had to swap engines before the start of the quarterfinals.

Bohlin proved that his second engine was at least as good as the first one as he stormed to a stunning 7.019 seconds, a new personal best and track record. A 7.06 seconds in the semifinals was enough for Bohlin to defeat Alex Hope after the British rider took an upset win in the quarterfinals over Nilsson in a great 7.27 seconds.

Lund stepped up to 7.04 seconds in the quarter and semifinals to defeat Häggblom and Ruhanen, after the Finn had beaten Mark Hope in the quarterfinals. Thus in Super Street Bike the numbers one and two qualifiers also had to face each other in the final. 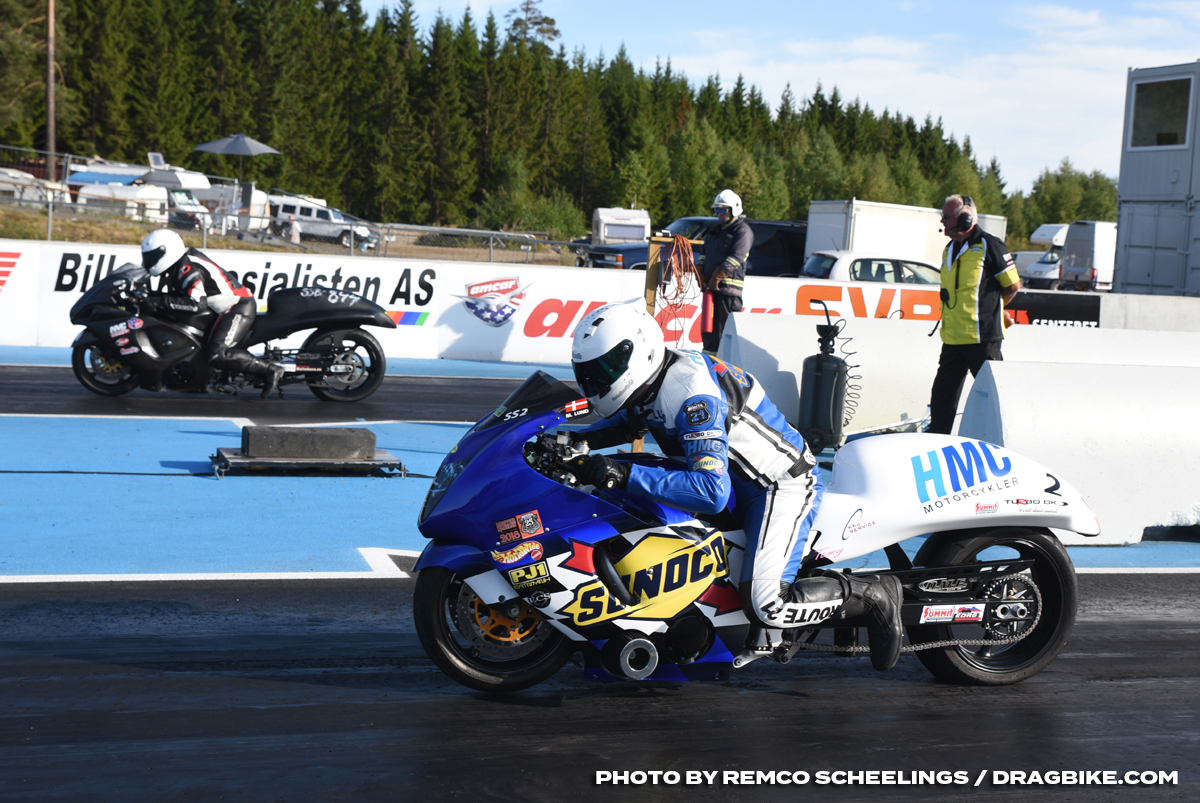 Bohlin was away first, but was a bit too quick and pulled a red light, handing the win to Lund, who stormed to a great 7.03 seconds, his best run of the weekend.

Super Comp Bike and Super Gas Bike had their first qualifying runs on Thursday and in three days of qualifying the 8.5 and 9.5-second index classes completed no fewer than ten runs! In Super Comp Bike Tony Anderson was the number one qualifier with an almost perfect 8.502-second run. Peter Östlund was second and Tomas Jonsson third. In eliminations, Andersson was defeated in the quarterfinals by Emil Östlund, who on his turn was beaten by Jonsson in the semifinals. 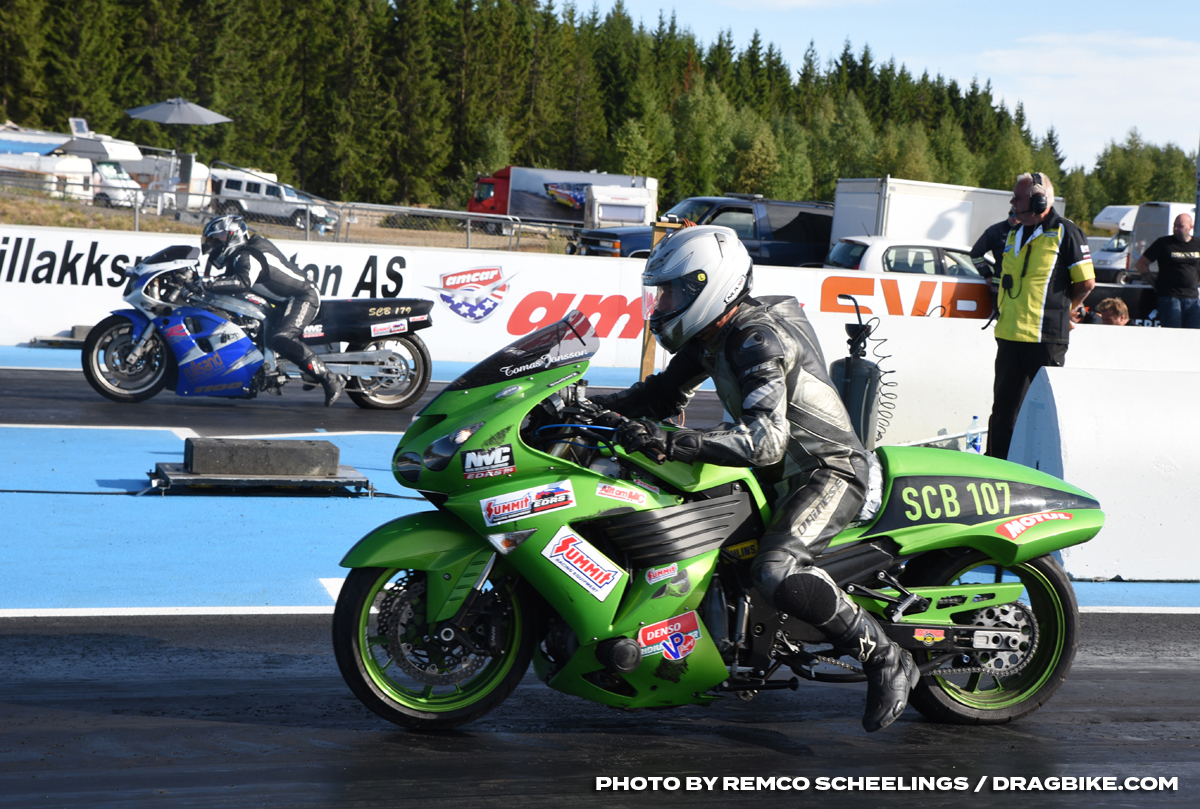 Peter Östlund didn’t make any mistakes and advanced to the final, where the numbers two and three qualifiers had to face each other. After almost identical reaction times, Jonsson had the better run and took the win in this 8.5-second index category.

In Super Gas Bike Jomar Larsen recorded a great 9.504 seconds to claim the number one qualifying position, with Mikkel Jensen and Ellen Ødegaard second and third with exactly the same elapsed time. But in eliminations, the numbers six and seven qualifiers, Jami Oksanen and Jenni Pekkarinen proved their championships form.

Oksanen recorded the perfect 9.500-second index time to defeat Larsen in the first round and advanced to the final after a win over Iiro Reinola in the semifinals. Pekkarinen, the winner at Alastaro, made it an all Finnish final after winning her three elimination rounds. In the final Oksanen had the better reaction time and although Pekkarinen had the quicker run, Oksanen took his second victory of the season after he was also the winner at Tierp. 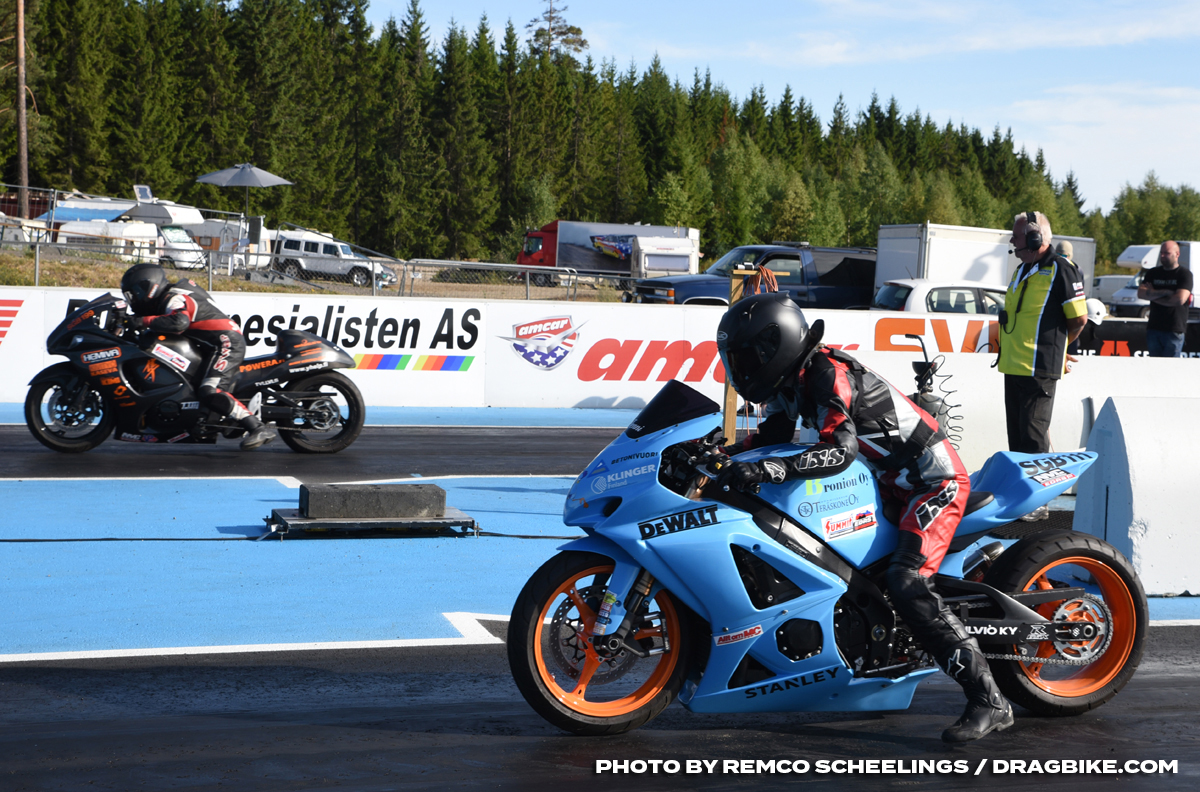 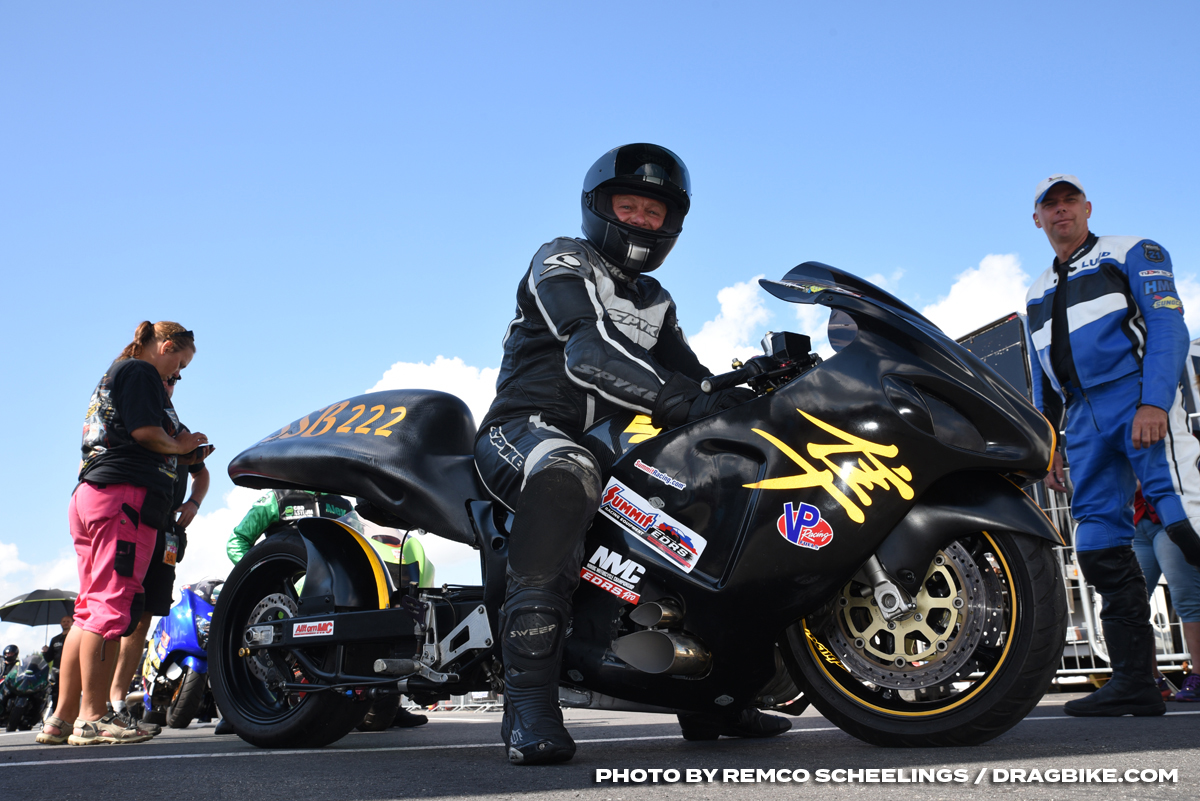 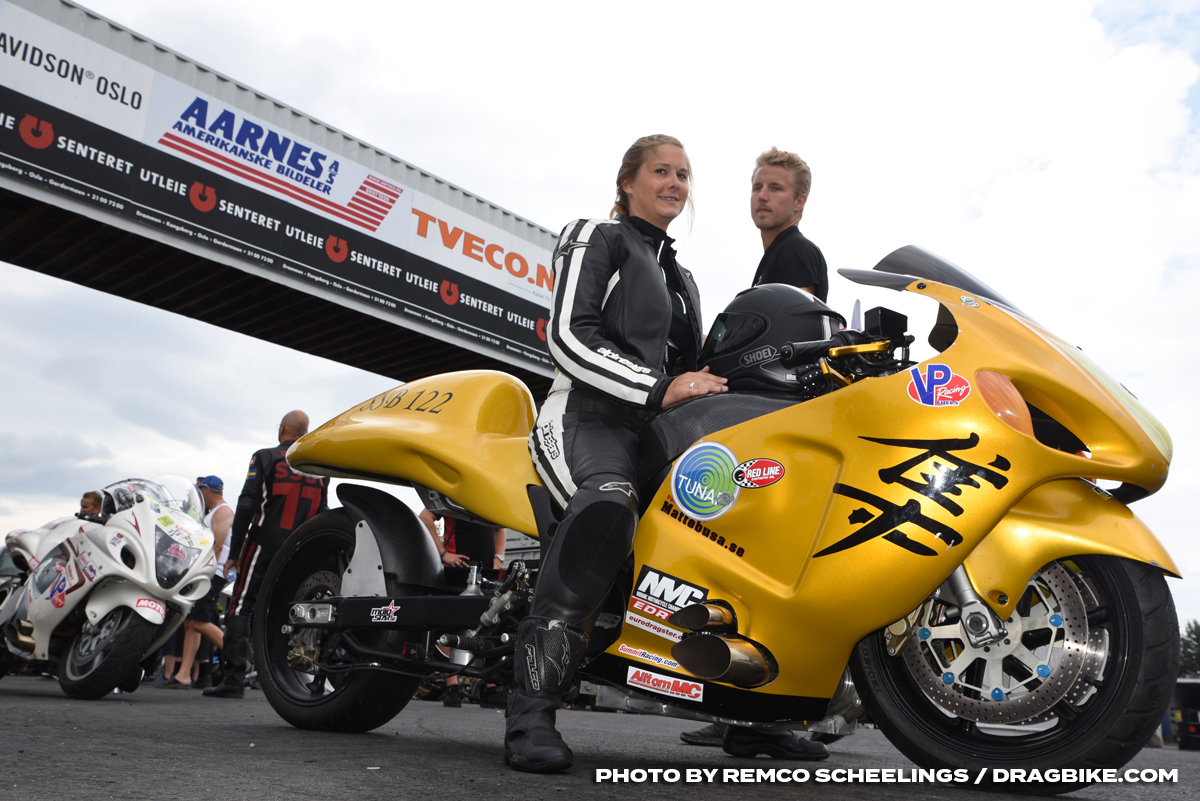 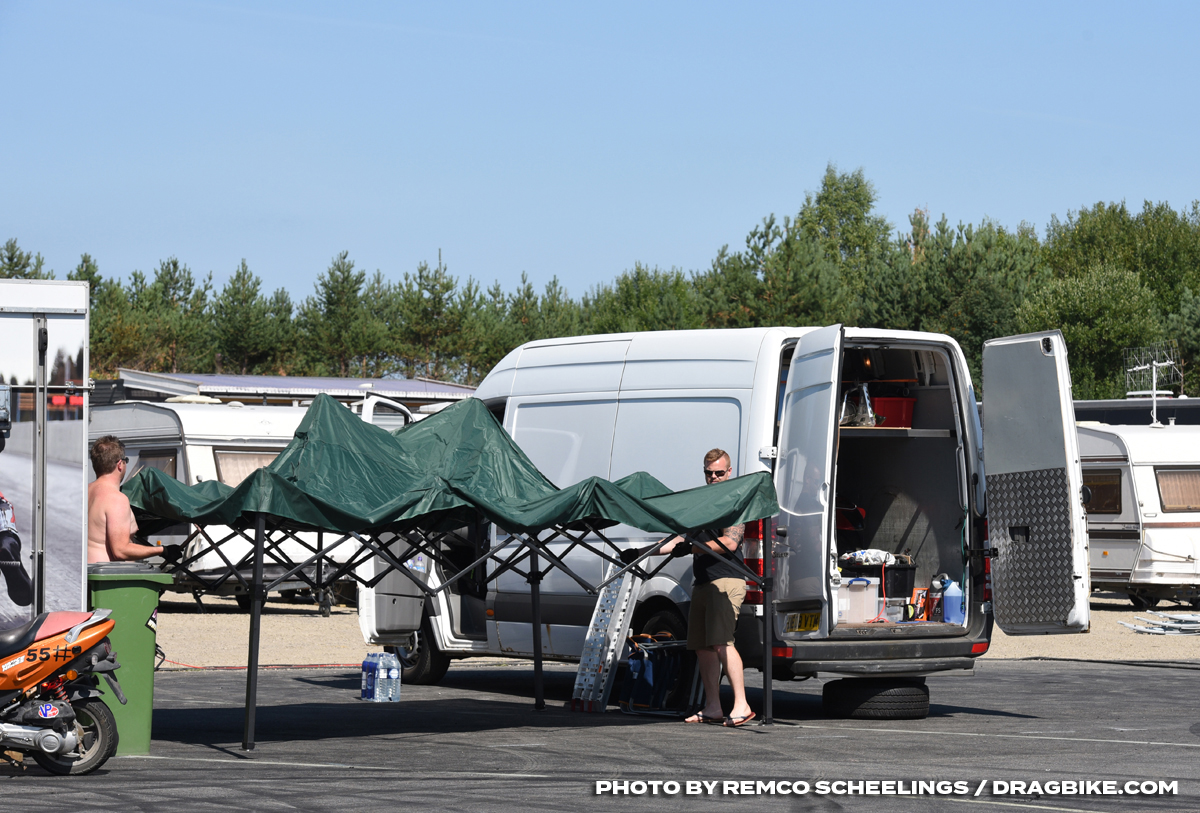 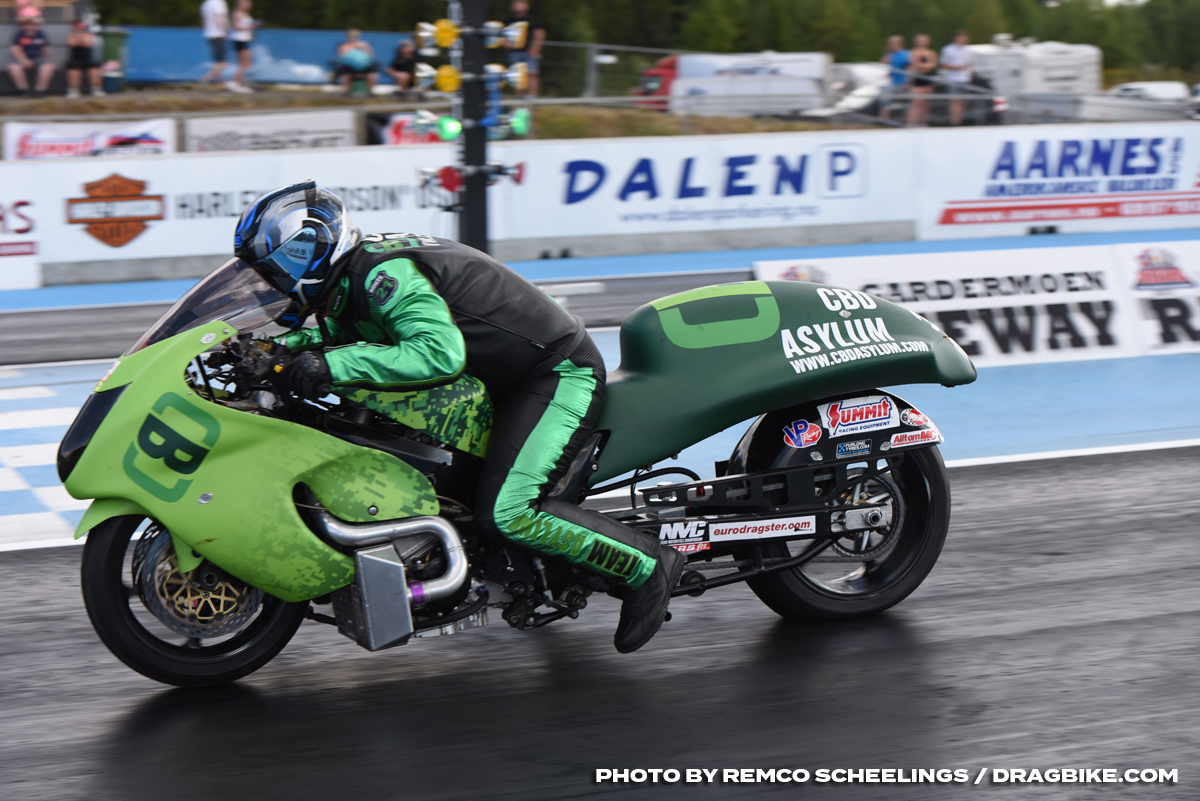