Filippos Papafilippou raced to victory in Top Fuel Motorcycle at a record-setting season-opening round of the EDRS Pro Nordic Motorcycle Championship at Tierp Arena. 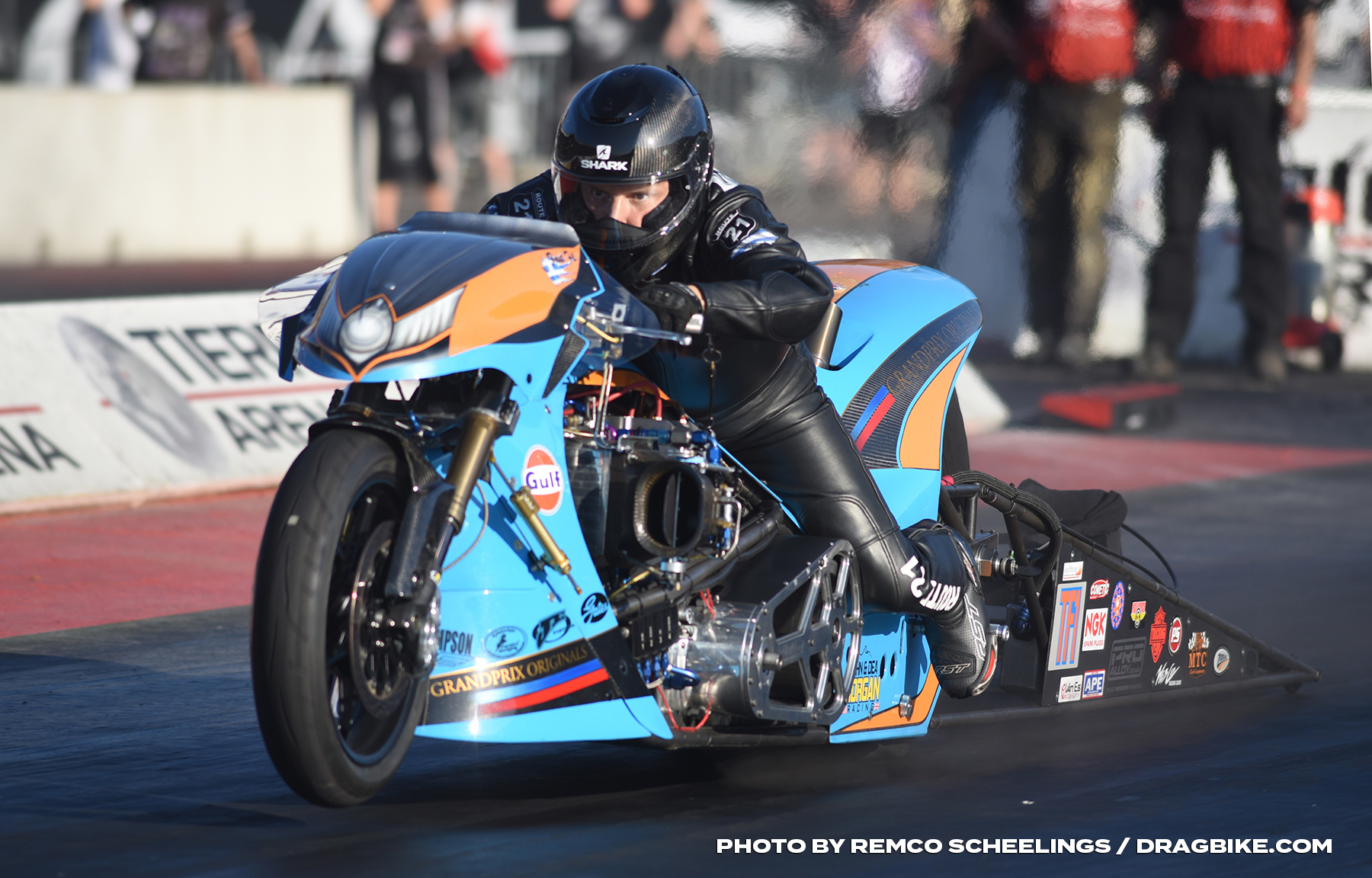 After resetting the European Top Fuel Motorcycle record to a great 5.783 seconds, the rider from Greece surprised Rikard Gustafsson in what looked like a lost final. In Super Twin Motorcycle reigning champion Marcus Christiansen started his title defense with a win in the final over Gert-Jan Laseur, while Kalle Lyrén reset the European record and defeated multiple European champion Fredrik Fredlund to take the win in Pro Stock Motorcycle. In Super Street Bike Vesa Ruhanen bounced back from the number five qualifying position to win the opening round of the championship.

Although some rain showers in the afternoon interrupted the racing program, the hard working crew of Tierp Arena made it possible that the Tierp Internationals, the opening round of the EDRS Pro Nordic Motorcycle Championship, could be completed including the finals.

In Top Fuel Motorcycle the numbers one and two qualifiers Filippos Papafilippou and Rikard Gustafsson carried on from where they left off in qualifying with record-setting elapsed times. Papafilippou defeated Jan Sturla Hegre to reach the final, while Gustafsson was too quick for reigning champion Thomas Pettersson. In the final the Greece rider lost traction immediately after the start and it looked like Gustafsson would take the win.

But the Swedish rider ran into problems as well and so Papafilippou was able to bounce back and take the win in 6.6 seconds. Papafilippou recorded the quickest elapsed time in the first round with a stunning 5.725 seconds, but the European record was reset to 5.783 second as the Greece rider was not able to back up his quickest pass.

In Super Twin Motorcycle number one qualifier and reigning champion Marcus Christiansen was both quick and consistent and defeated Samu Kemppainen in a very close semi-final.

On the other side of the ladder number two qualifier and 2017 champion Tommy Grimes stunned with a great 6.19 seconds in the first round, but had mechanical issues in the semi-final, handing the win to Gert-Jan Laseur. In the final it was once again Christiansen who proved his form with a great and winning 6.48 seconds. 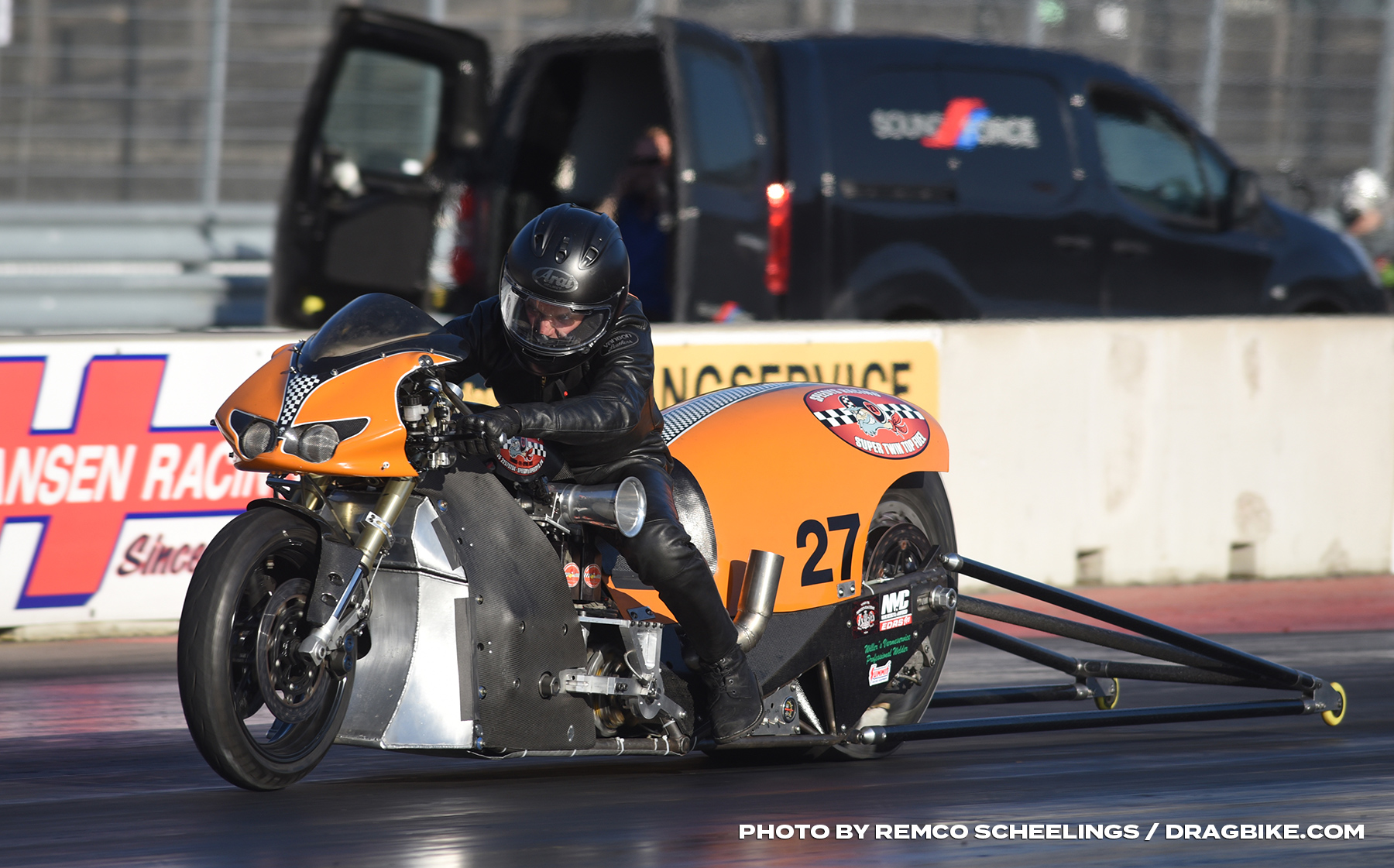 In Pro Stock Motorcycle it was the expected close fight between the numbers one and two qualifiers Kalle Lyrén and Fredrik Fredlund. Lyrén reset the European record in the semi-finals to 6.969 seconds, while Fredlund reached the final after a win over Bertrand Maurice. In the final Lyrén had another perfect run and recorded a winning 6.98 seconds, while Fredlund had to lift when his bike almost crossed the centerline.

In Super Street Bike there was a major upset in the first round when number one qualifier and reigning champion Mathias Bohlin lost traction immediately after the start and was defeated by Dag Wagenius. Number two qualifier Ida Zetterström advanced to the semi-finals after a win over Nichlas Sverin, but was then hit by traction problems and was defeated by Anders Blanck, who recorded a great 7.20 seconds, after the Norwegian rider had recorded a 7.17 seconds in the first round. On the other side of the ladder last year’s runner-up in the championship Vesa Ruhanen improved his elapsed times in almost every run. 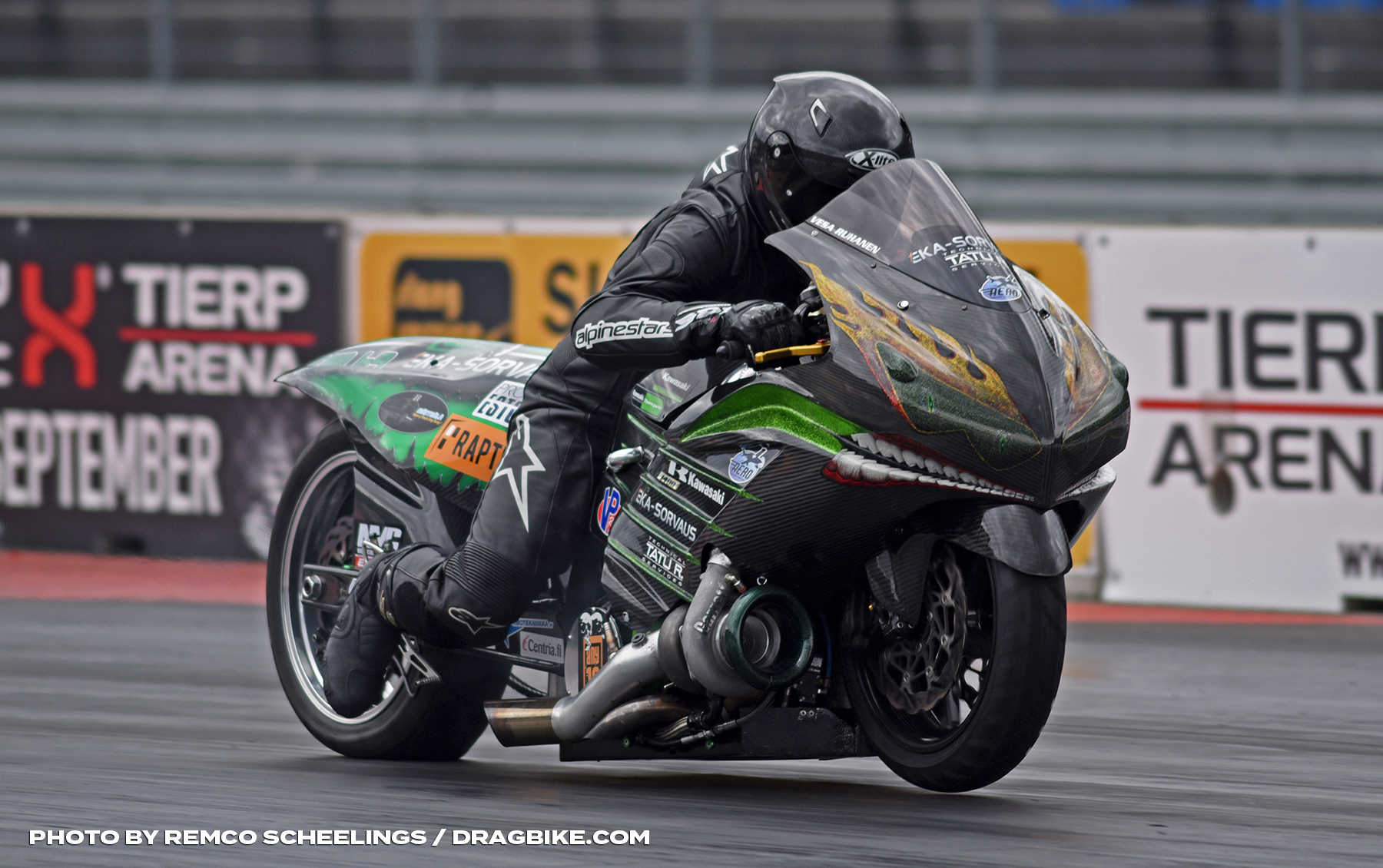 Starting from the number five qualifying position the Finn defeated Wagenius in the semi-final to advance to the final. The final was an anticlimax as Blanck suffered mechanical problems in the burnout and couldn’t make his run, handing the win to Ruhanen.

In Super Comp Bike Rasmus Östlund, the number three qualifier, was the winner after defeating number four qualifier Peter Svensson in the final. 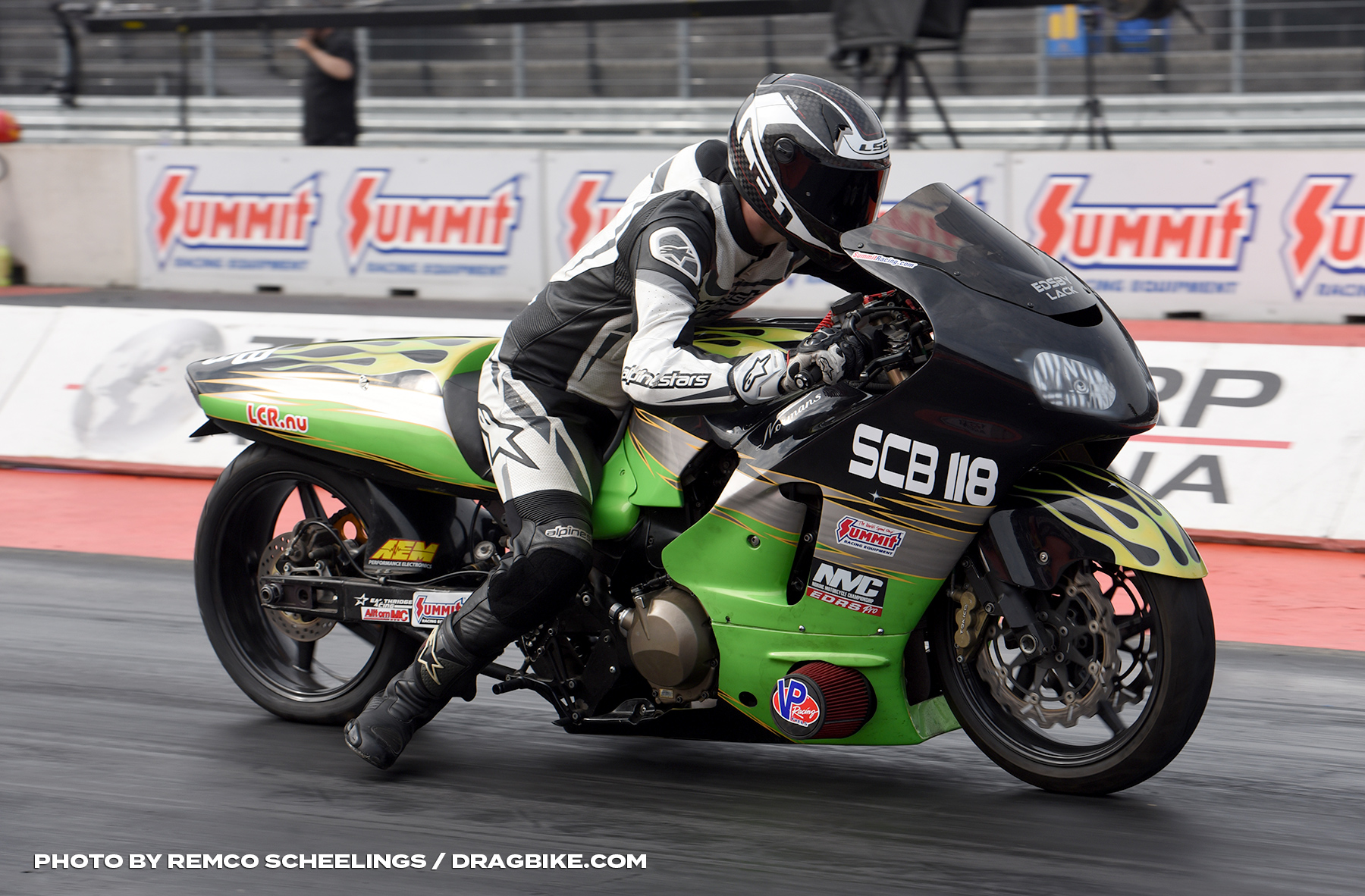 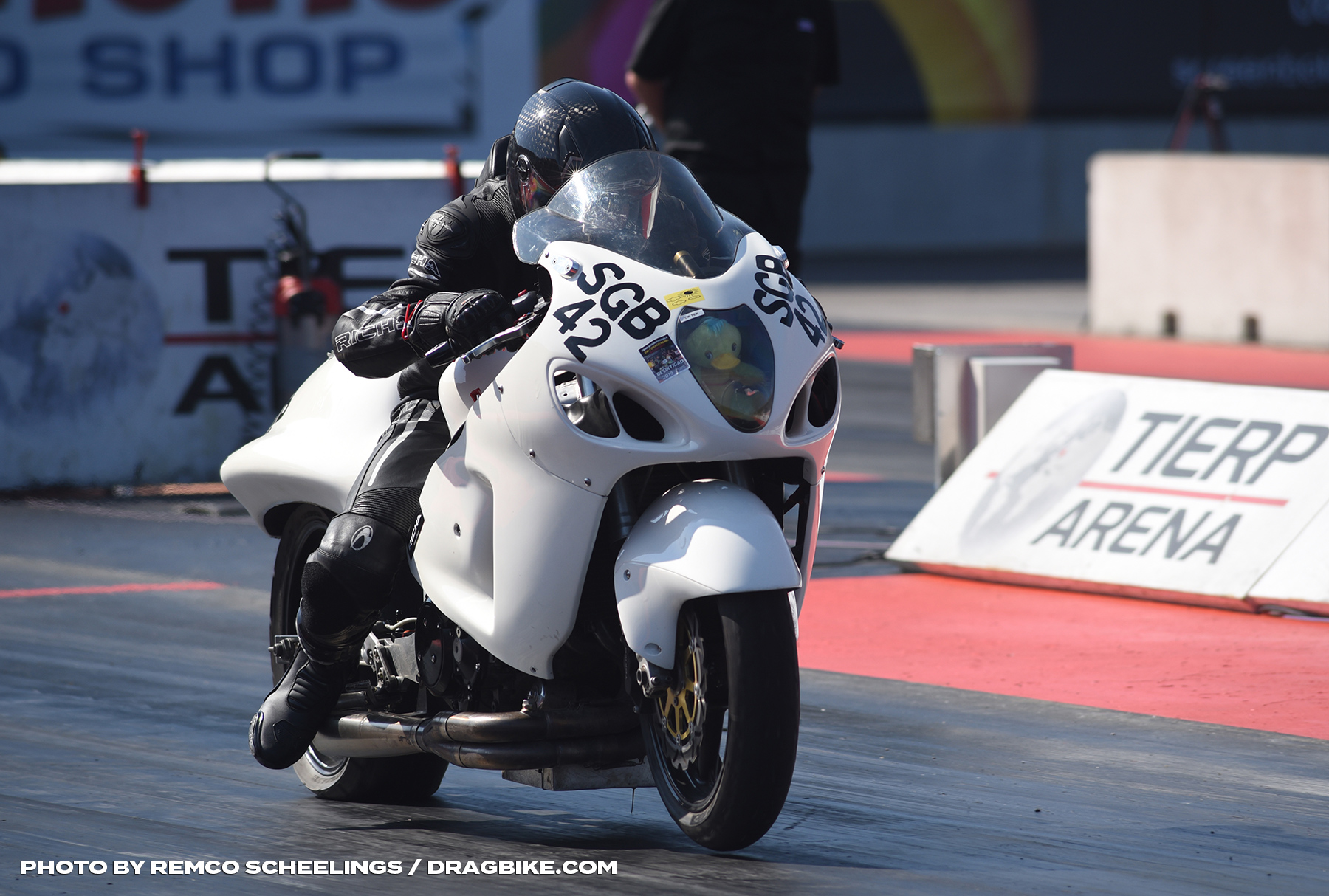 The points standings and more photos from the Tierp Internationals can be found on other parts of the website: www.edrspro.com