Ida Zetterström made history by claiming the victory in Super Street Bike at the Drag Challenge at Gardermoen Raceway, round three of the EDRS Pro Nordic Motorcycle Championship. Zetterström is the first female rider to win a race in the EDRS Pro Nordic MC Super Street Bike category. In Super Twin Motorcycle Greger Johansson won his first race of the season after defeating Torsti Kettula in the final, while in Top Fuel Motorcycle reigning champion Thomas Pettersson claimed the win at Gardermoen.

The Drag Challenge at Gardermoen Raceway in Norway was the third round of the EDRS Pro Nordic Motorcycle Championship. After some great racing in qualifying, eliminations were exciting and surprising as well. 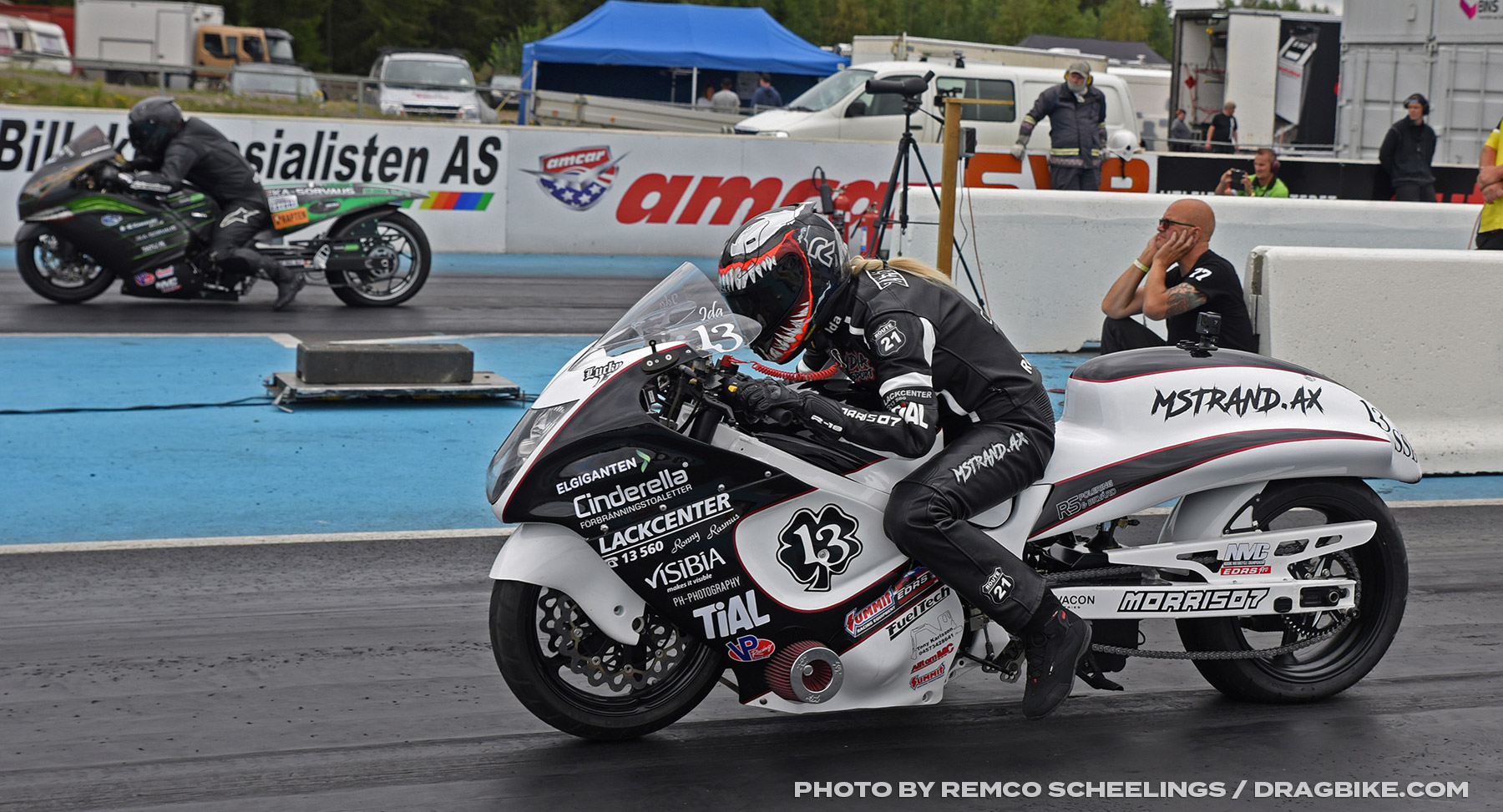 In Super Street Bike the numbers one and two qualifiers, Mathias Bohlin and Ida Zetterström didn’t make any mistakes and had to face each other in the final. Bohlin, the reigning EDRS Pro Nordic MC champion, defeated Björn Friström in the semifinal to advance to the final. Zetterström was too quick for Dag Wagenius in the quarter-final and then had to face Vesa Ruhanen. The number one in the championship standing impressed in the quarter-final with a stunning 7.01 seconds to defeat Kimmo Pulakka. In the semifinal, Ruhanen suffered some wheelspin while Zetterström stormed to a winning 7.28 seconds. 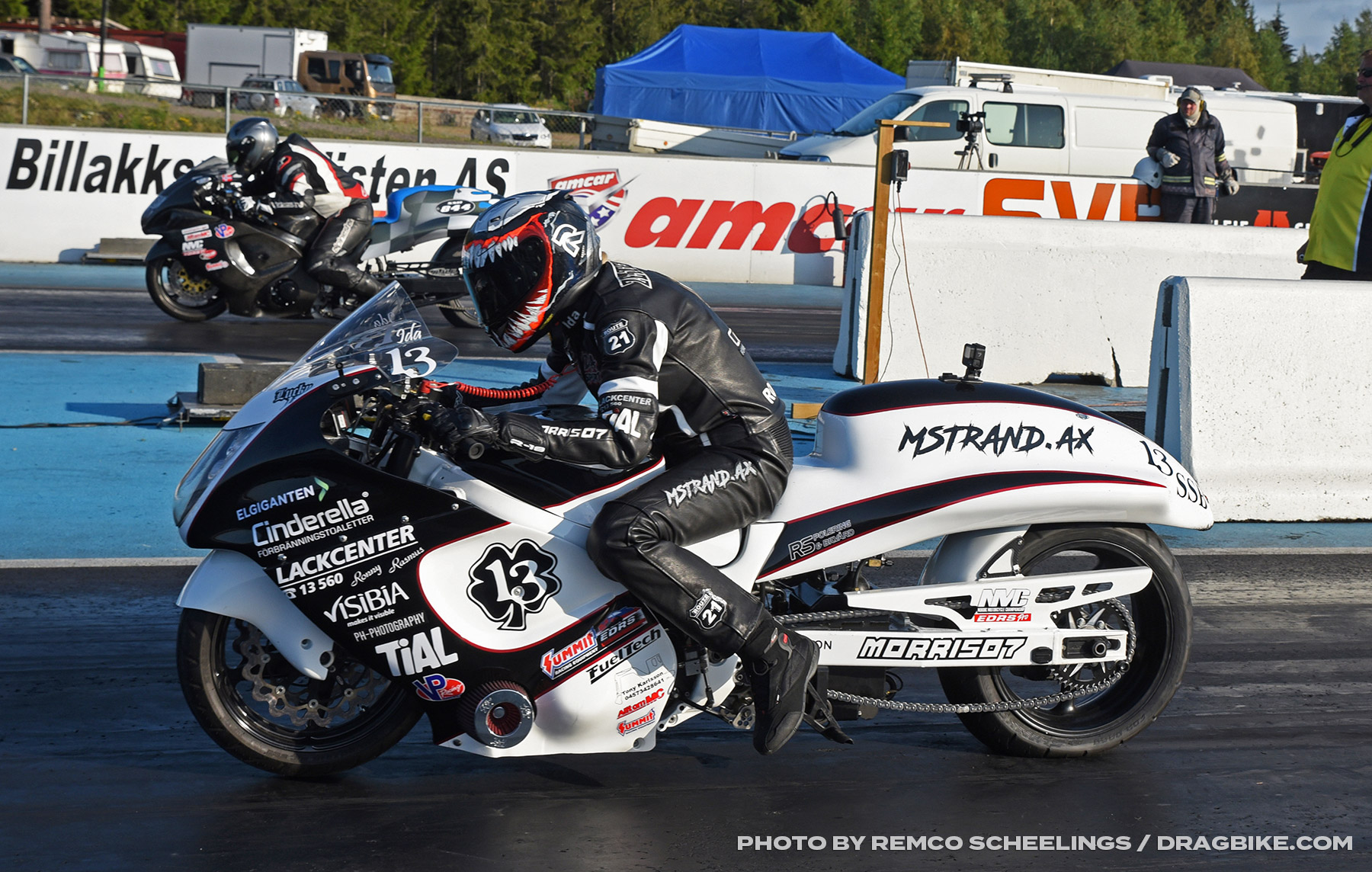 And Zetterström saved the best for the last, as in the final the Finnish rider stormed to a new personal best of 7.10 seconds to defeat Bohlin (7.18 seconds). Zetterström is the first female rider to win a race in the EDRS Pro Nordic MC Super Street Bike category. With her win Zetterström reduced the gap in the championship standings to Ruhanen to 15 points. 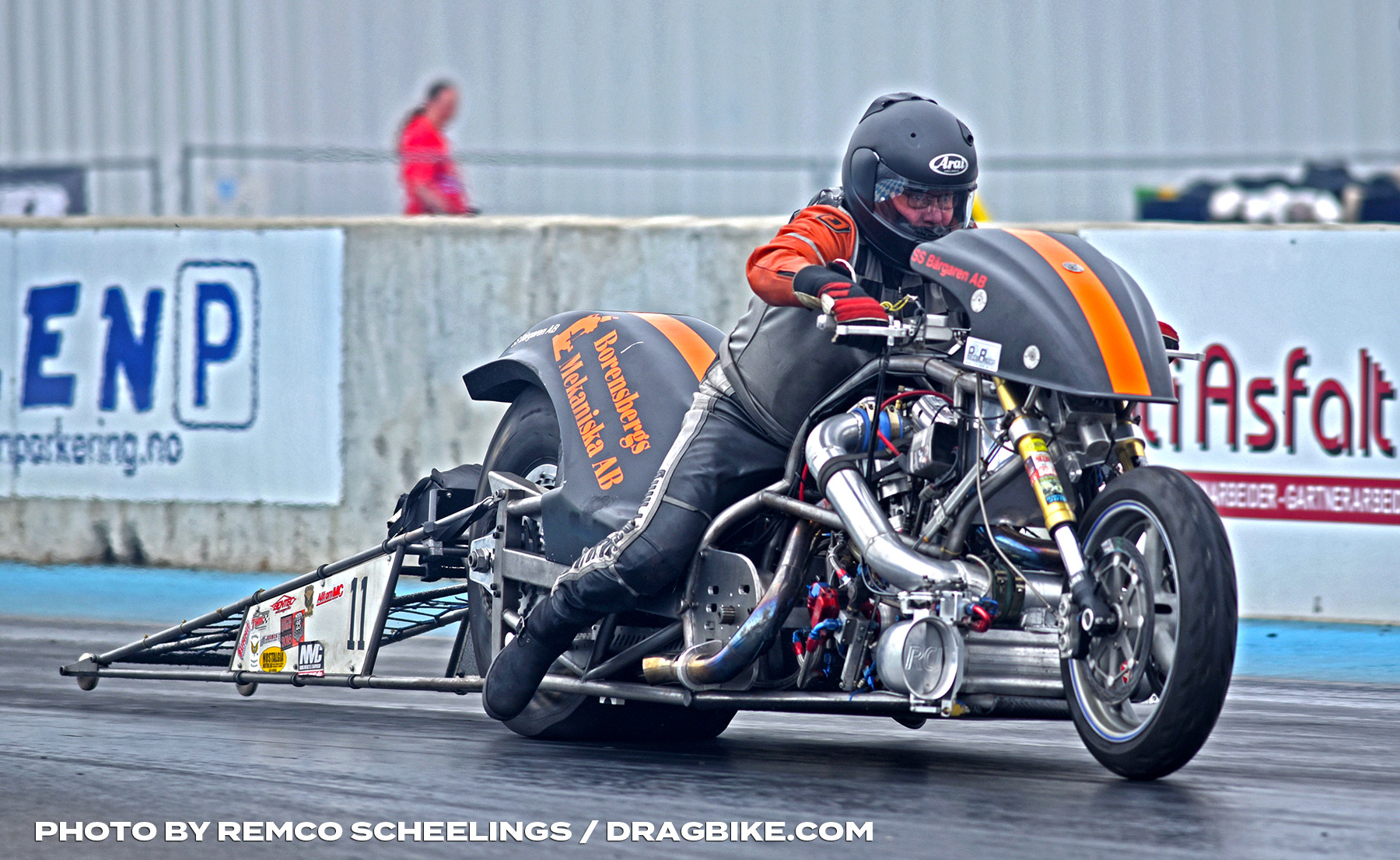 In Super Twin Motorcycle Greger Johansson advanced to the final after defeating Erling Opheim and number one qualifier Svein Olav Rolfstad. In the semifinal, Johansson impressed with a great 6.90 seconds. On the other side of the elimination ladder Torsti Kettula defeated Teemu Kettula and Kristin Hegre to advance to the final.

In another great run Johansson stormed to 7.06 seconds to claim the win over Kettula (7.77 seconds). 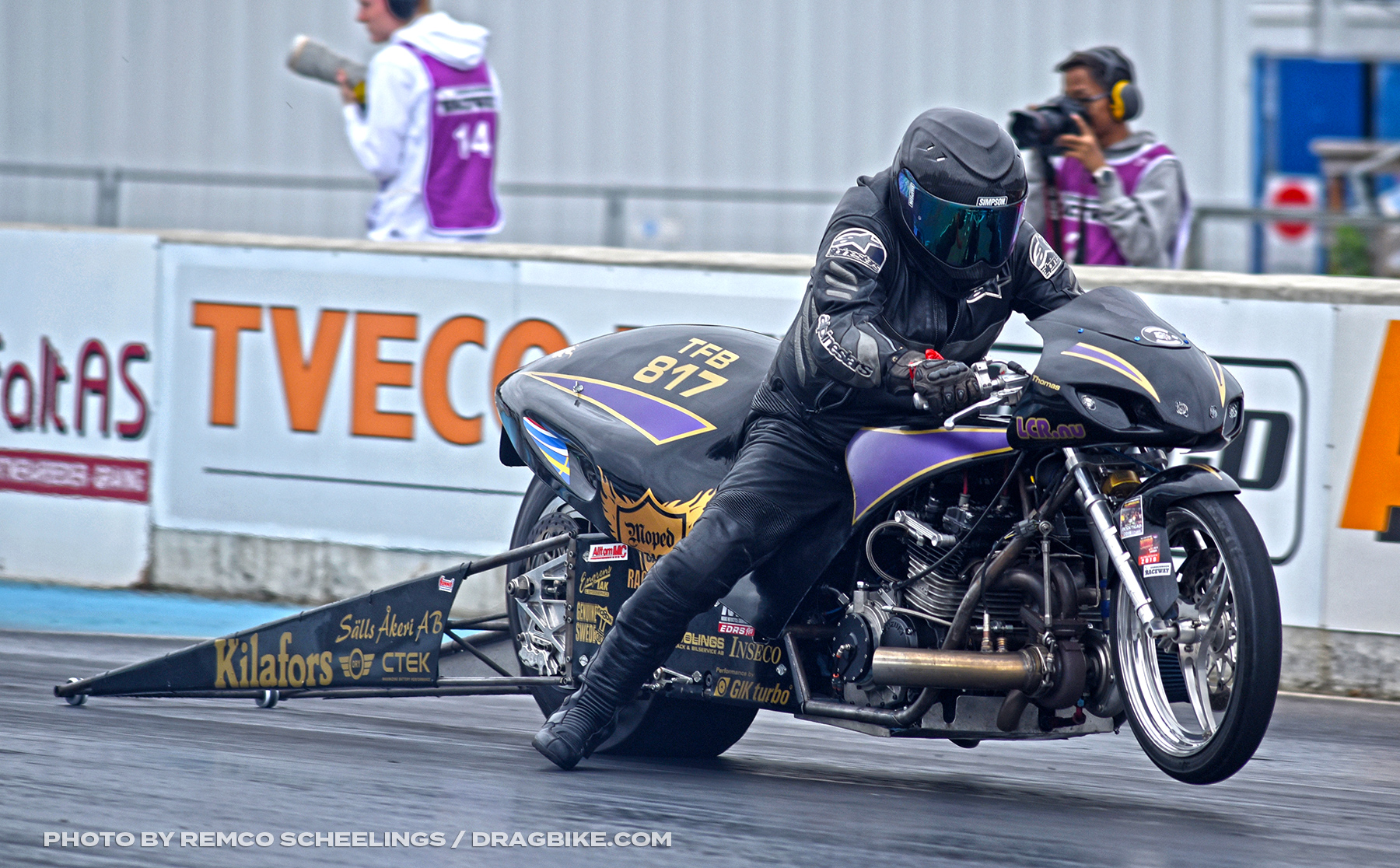 In Top Fuel Motorcycle Thomas Pettersson impressed with a great 6.59 seconds win over Hans Eriksson in the semifinal. In the final the reigning champion had to face number one qualifier Jan Sturla Hegre. The rider from Norway had a bye run in the semifinal, but suffered severe engine damage and couldn’t come back in the final, handing the win to Pettersson. 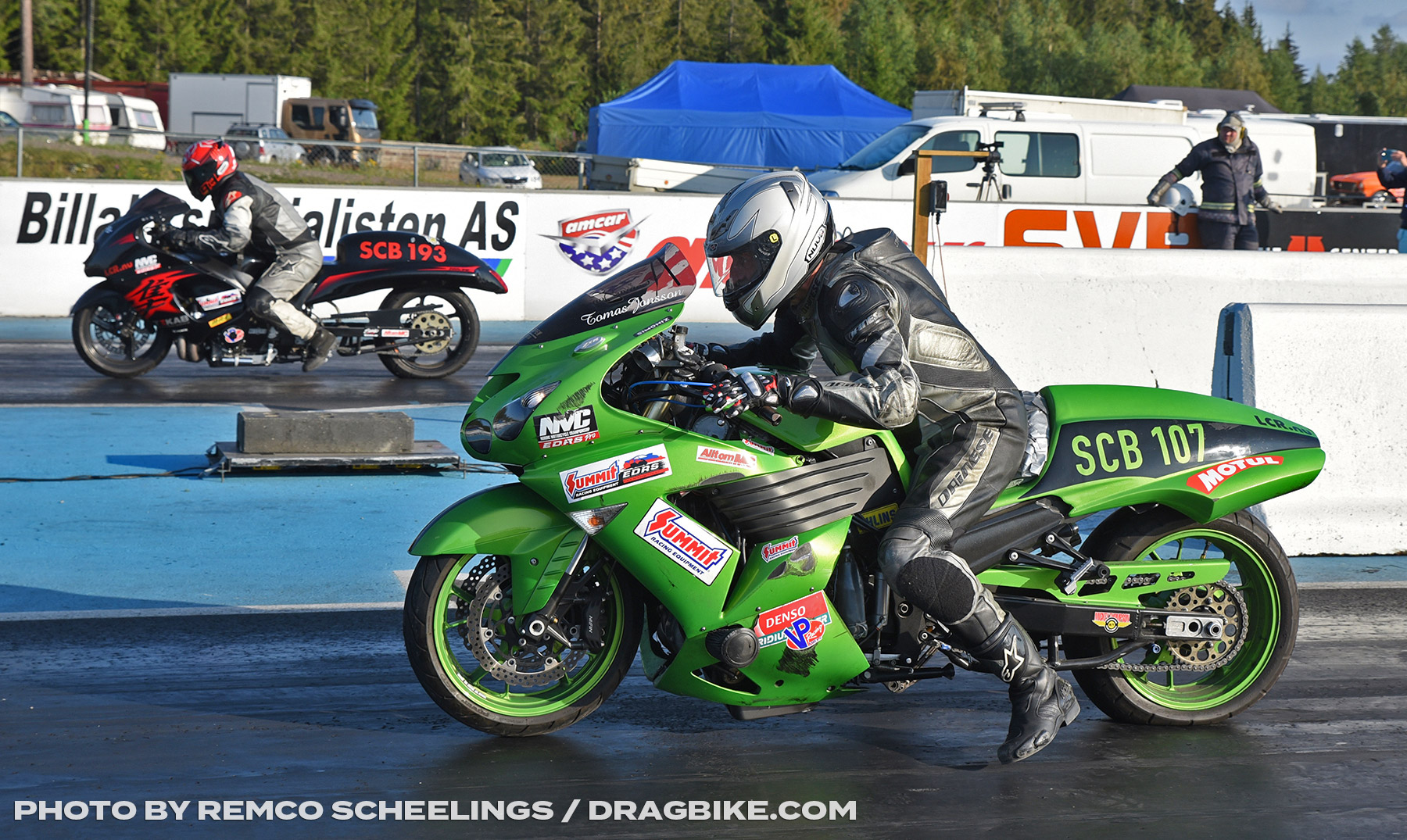 In Super Comp Bike the number one qualifier Tomas Jonsson advance to the final. There he had to face number five qualifier Peter Svensson. In the final Svensson surprised again by taking the win over Jonsson. 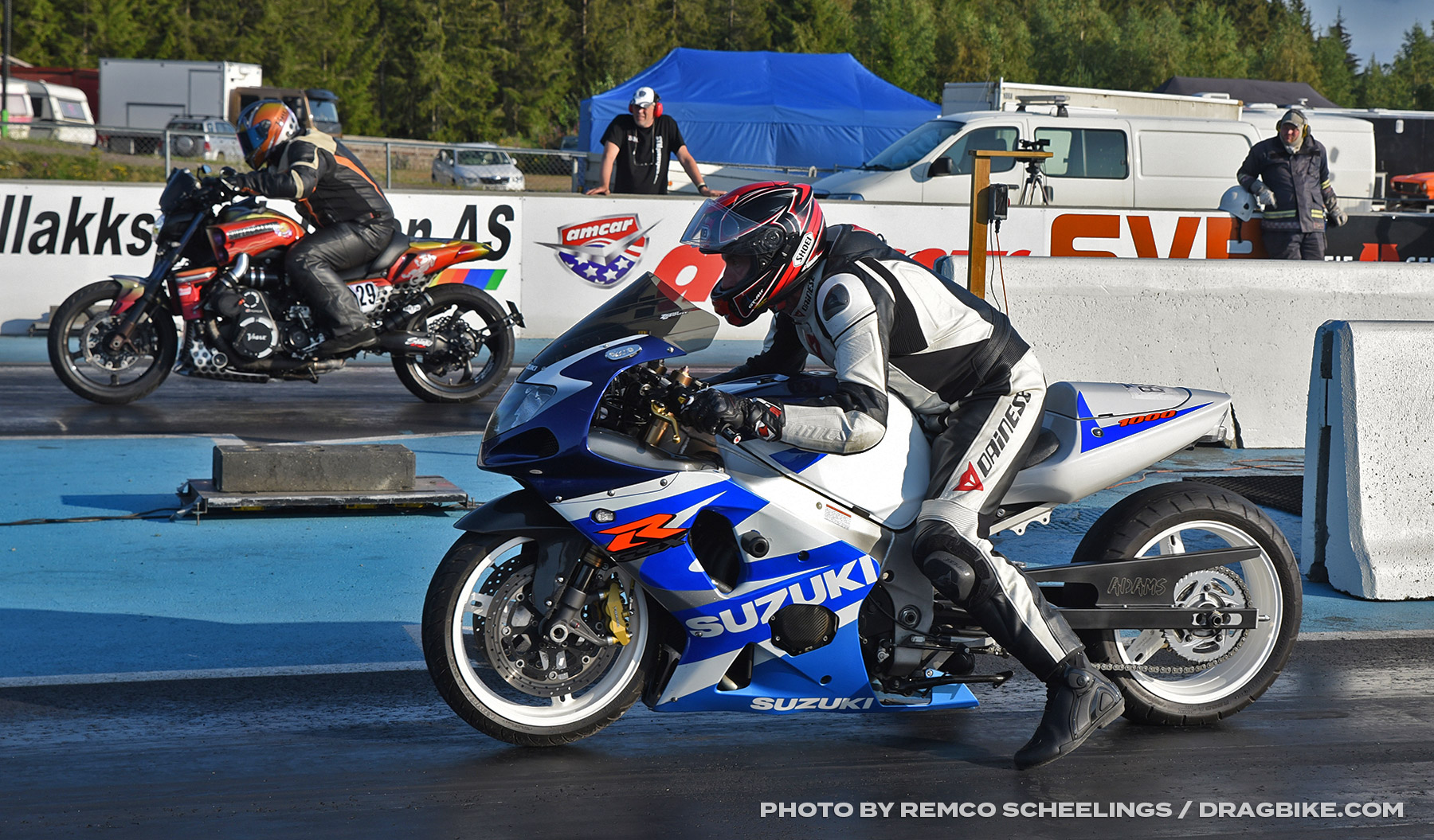 In Super Gas Bike the number ten qualifier Wille Skinnars was the surprise finalist. In the final Skinnars had to face number three qualifier Jonathan Edwards, who defeated Heikki Juhani Koskinen in the second semifinal. In the final Edwards claiming the victory over Skinnars.

The EDRS Pro Nordic Motorcycle Championship continues August 22-25 with the final race of the season, the Summit Racing Equipment Internationals at Tierp Arena.