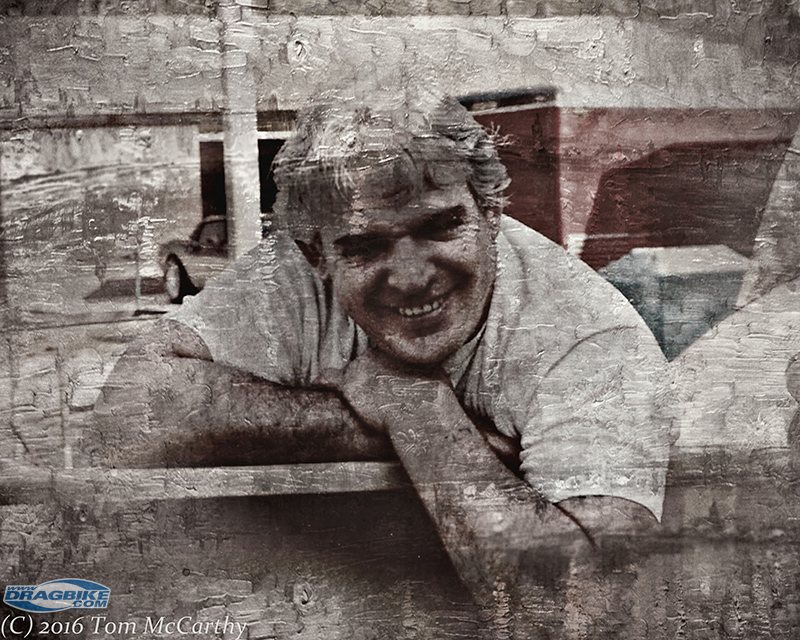 It was twenty-one years ago Elmer came off his Top Fuel bike at 232 MPH and did not survive his injuries. On that sad day, September 1st, 1996, we not only lost the greatest Top Fuel motorcycle drag racer the world has ever known, but we lost a great leader in the sport of motorcycle drag racing.

So strong and influential was Trett’s performance during his twenty years of Top Fuel motorcycle drag racing, 1976-1996, that the National Hot Rod Association, a car sanctioning body, voted Trett to be among the top 50 greatest NHRA drivers of all time in the sport of drag racing. That say’s a lot about Mr. Trett and his legacy.

Stop and consider for a moment, Trett was on the razors edge of running that first five second elapsed time in 1996. On September 11, 1994, at Atco NJ, Trett Racing clocked a stout 6.36 elapsed time at a thundering 234 MPH, proving in 1994, he had the power to run in the fives. After Trett’s death in 1996, it was not until October 31, 1999 that Larry McBride first crossed into the five second elapsed time zone. Now take pause and know that it took the official MTC Engineering 5 Second club from the year 2001, until the year 2014, to fill the eight slots of this lofty, elite club.

In the near two-decades since the passing of Elmer Trett on September 1st, 1996, until start of the season in the year 2016, only ten Top Fuel motorcycle drag racers, world wide, have entered the five second zone in sanctioned competition. Had Trett not lost his life on September 1st, 1996, there is little doubt he would have been in the 5’s during the 1997 racing season.

So if Trett was ready to bring Top Fuel motorcycle drag racing into the five second elapsed time zone in 1997 and twenty years later only ten teams have found the combination in two decades of trying: what was so different about the way Elmer Trett approached his drag racing program?

Trett was not ahead of his time in drag racing he was much smarter than that – he defined his time in motorcycle drag racing. Trett entered the class of Top Fuel motorcycle in 1976, and by 1979 he had earned his first T/F #1 plate with the DRAGBIKE! sanction. In 1980 he was the quickest and fastest Top Fuel Harley pilot in the world on a double engine nitro Harley. Keep in mind Trett built, tuned and raced his own drag bikes.

In 1978, Elmer could see two engines was too heavy to stand up to a single engine Top Fuel bike with a supercharger. So in moving away from his world record holding double, his initial response was to create from scratch the first V-60, two cylinder, side-by-side-rod, aluminum billet, one piece crank shaft, super charged, injected, nitro Harley. He began testing in the spring of 1981, but when Harley Davidson reneged on their pledge of finances to help him, he took a different route.

Throughout the year 1982, Trett spent the entire season getting to know the inline-four cylinder motor and it’s quirks with the help of Mike Gray, who was the genius behind the Terminal Van Lines Top Fuel bike. In one additional year’s time, by the end of the 1983 season, Trett Racing had it’s second T/F #1 plate. Elmer’s wife Jackie and his daughter Gina were awarded the NMRA Pro Mechanics of the year award. The juggernaut that was Trett Racing came into full effect in 1983 as Elmer crossed the 200MPH barrier.

In the summer of 1981, he started learning how to build and race inline four cylinder motors and started designing his own, the first day he laid his hands on one. Here in lies the clue as to what was so different about Trett … the clue that Elmer left behind for motorcycle drag racers as to how and why he was always getting ahead of everyone.

Question: how did a man with an eighth grade education and pocket money he earned from building motors for his friends, rise to be the top Harley racer in the world in four years (1976-1979)? Then in another span of three years from 1981-1983, he became the premier Top Fuel racer in three racing sanctions (NMRA, IDBA, DRAGBIKE!) with a completely new engine/chassis combination – how did he do that?

There are clues if you know where to look.

Elmer’s outlook and his approach to the sport of motorcycle drag racing were vastly different from that of most motorcycle drag racers, even by today’s standards. Here’s the key to unlocking one of the secrets: There’s an enormous difference between development and refinement.

With development, one engages in the process of evolution, growth, and the maturation of something. The desired end result is the creation of something new, through a metamorphosis which yields something that did not exist before. On the other hand, there is the process of refinement, the removing of impurities, or unwanted elements from something which is the improvement or clarification of something. In the end, you have a refined item, but it’s still the same item – just improved. Development and refinement are vastly different approaches. Trett spent his racing career dedicated to the development of Top Fuel motorcycles.

Here in lies the difference in Trett’s racing program and this is why he was always going faster and quicker than anyone else, Elmer Trett and his creations were always in a state of development rather than refinement. Trett never raced the same motorcycle more than four to five seasons, if he could avoid it. It’s also interesting to note Trett never bought and raced someone else’s drag bike. He hand built, helped design, tuned and raced, every one of his drag bikes. As he created a new drag bike, he was already thinking of what he would need to improve for his next race bike.

From looking at Elmer’s family drag racing scrap book, it was possible to trace Elmer’s earliest roots in motorcycle drag racing. Trett began motorcycle drag racing in the bracket bike ranks with his highly modified 1969 Sportster street bike during the 1971 season. By 1972 Elmer had that motor in a lay down dragster type chassis. In 1974 he was building his first double engine gas Harley for Top Gas competition in 1975. One year later in 1976 he was building his first Top Fuel bike.

During the years 1971 to 1976 Trett raced four very different drag bikes in four very different classes, he was developing rapidly as a motorcycle drag racer, so were his drag bikes. Trett’s entire drag racing career continued on exactly like this, one of constant development. During Elmer Trett’s 25 years of motorcycle drag racing, he raced eleven different drag bikes he created. In his 20 years of Top Fuel bike racing, from 1976 to 1996, Elmer built and raced eight significantly different T/F motorcycles from double motor configurations to inline four cylinder Trett creations. Elmer Trett’s racing program was one of constant development.

It’s mind boggling to consider today, some two decades after Trett’s passing, had he lived on, what would he have created? Where would Top Fuel bike performance be today?